Skip to content
“We have to go if we want to get that spot!” Ryan said, as he woke me from my slumber and fashioned the rods in the rod holders. Roger was up too, so I sprang out of bed to gear up.
“Okay, Erik, slow down. The spot we want is at the corner coming up.” Ryan said as we drove. I lightly applied the brakes, looking for a corner and the turn out, but only saw blackness. 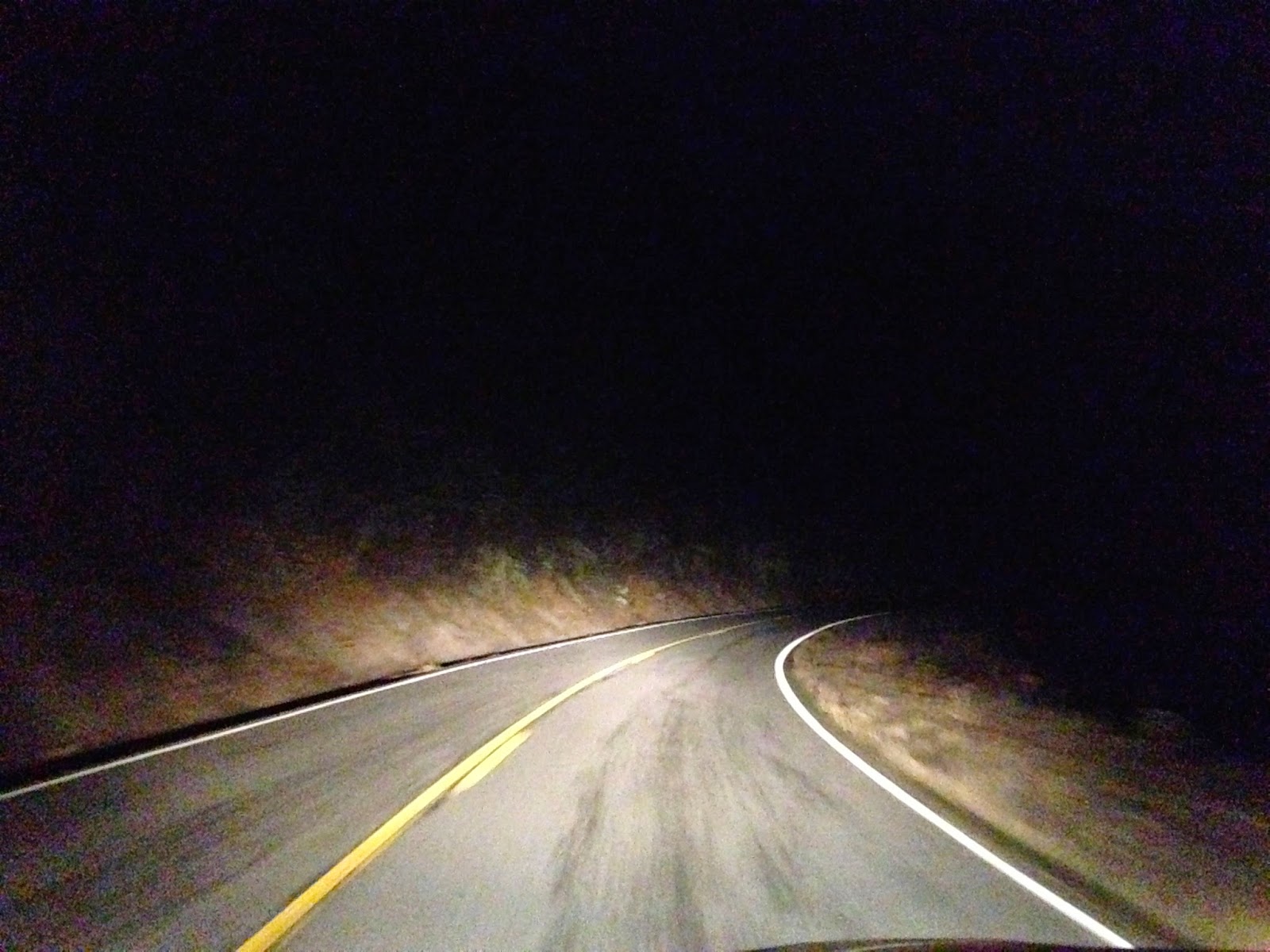 “We are passing it!” Ryan said.
“I can’t see anything!” I protested. Ryan pointed, and I took my eyes off the road for a second to see what he was talking about.
“Crap!  I’ll turn around!” I said, but I had to wait for the car that was approaching.  The headlight passed me, and I started to turn.
“You’ve got to be kidding me!?” Roger said, sounding horror struck.
“They are taking that spot, huh?” Ryan asked, rhetorically.  I had the car turned around by now, and saw it for myself: the car’s brake lights were on and parked at the very pullout I had missed.
“Damn! Sorry guys.” I said, “I couldn’t see.”
“Welcome to the South Fork of the Clearwater, Erik!” Roger said, not surprised at all over what had just happened.
“Missed our spot by five seconds.” Ryan said, “it’s your typical South Fork moment; but I have another spot in mind”. Lucky for us, Ryan’s next spot was empty, and we were out of the car fast to secure it. 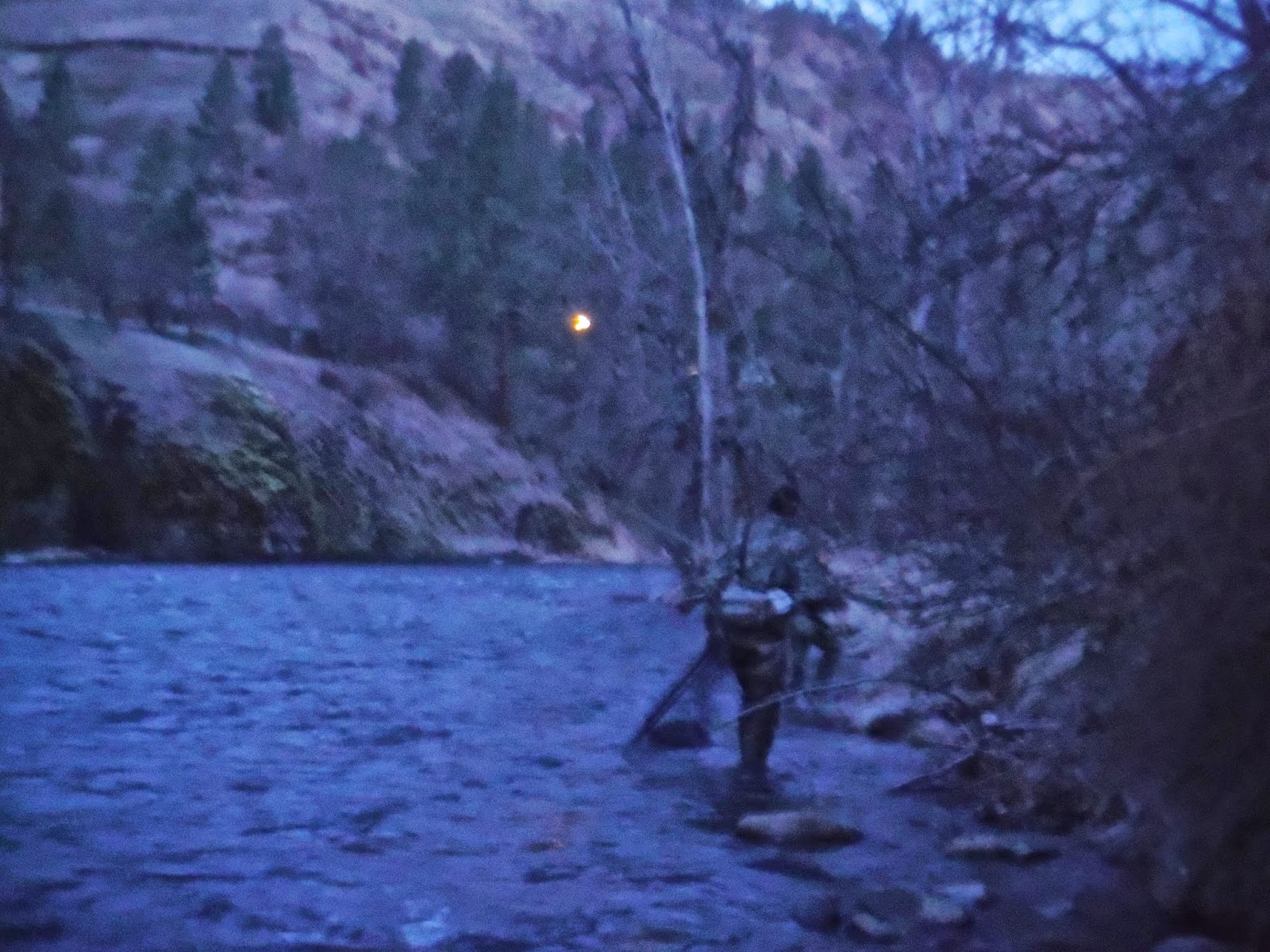 Ryan explained the depth and holding spot of the fish in full detail before we started to fish. 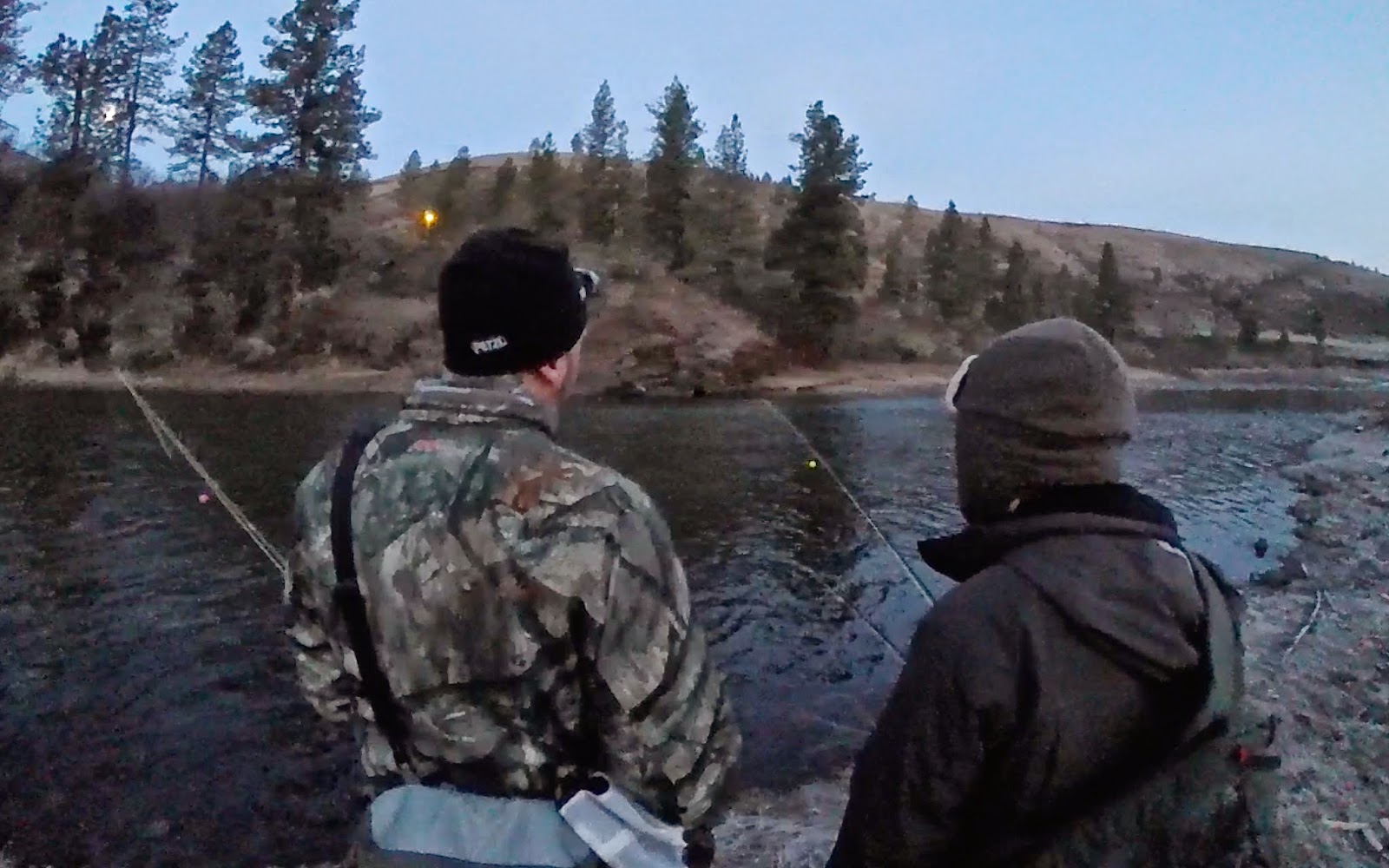 Roger was in prime location before he shot his flies out into position. The sound of thrashing water broke Ryan’s and my attention from our own lines to look downstream.
“There’s one!” Roger yelled, and both Ryan and I sprang to life.  Ryan grabbed the net and ran down to help, while I grabbed the Go-Pro.  I was in full spring, headed towards Roger, and got there just in time to see his hook pop out of his steelhead’s mouth. 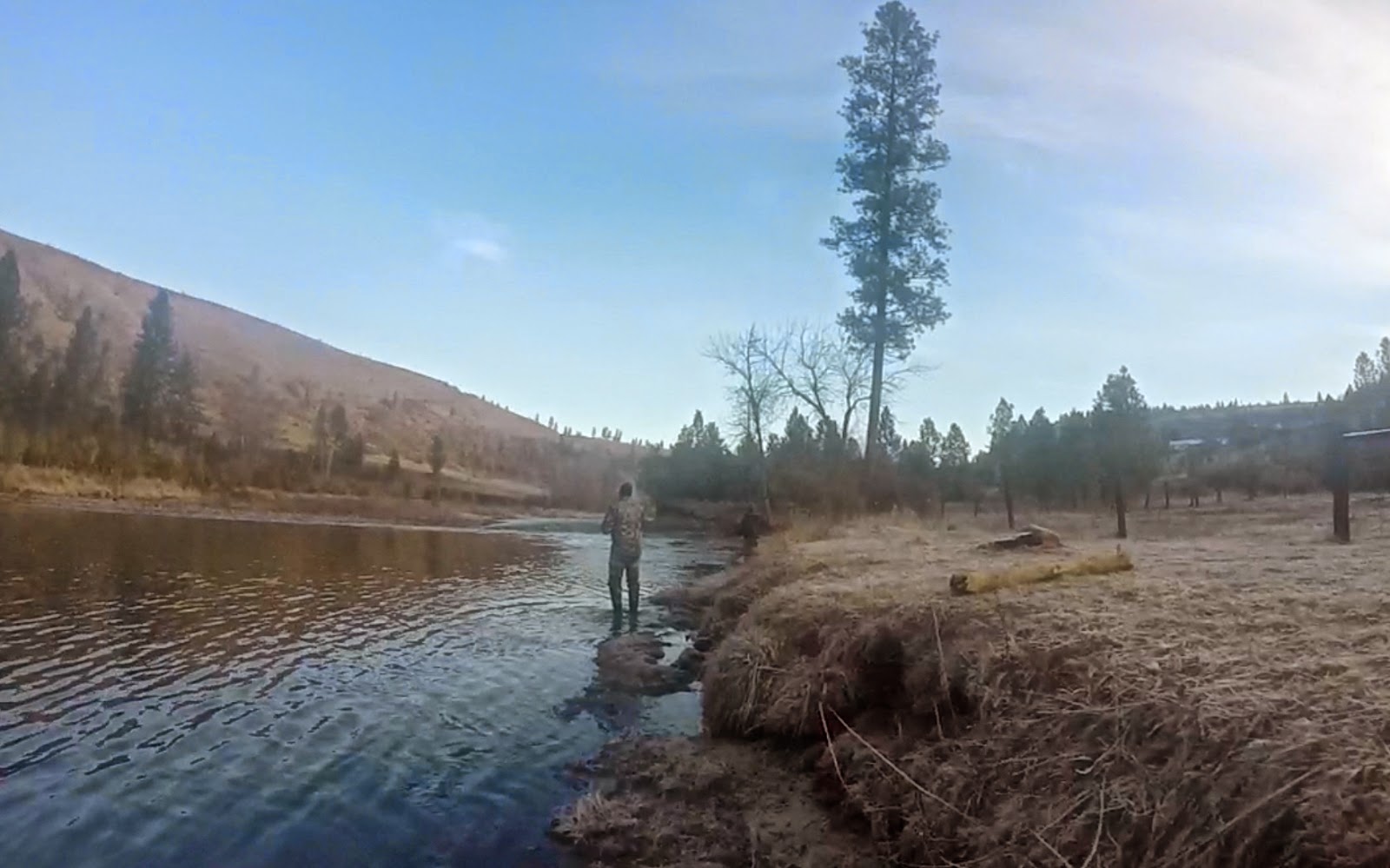 No one likes a lost steelhead, but Roger went back to casting as if it didn’t phase him at all. We only had until 12pm before we had to get off the water, so we moved to a new location we wanted to check out.  We knew it would most likely be available, because it required some wading to get there.  I hooked into a steelhead but lost it in the fight; it was a good omen that we were in the right spot. 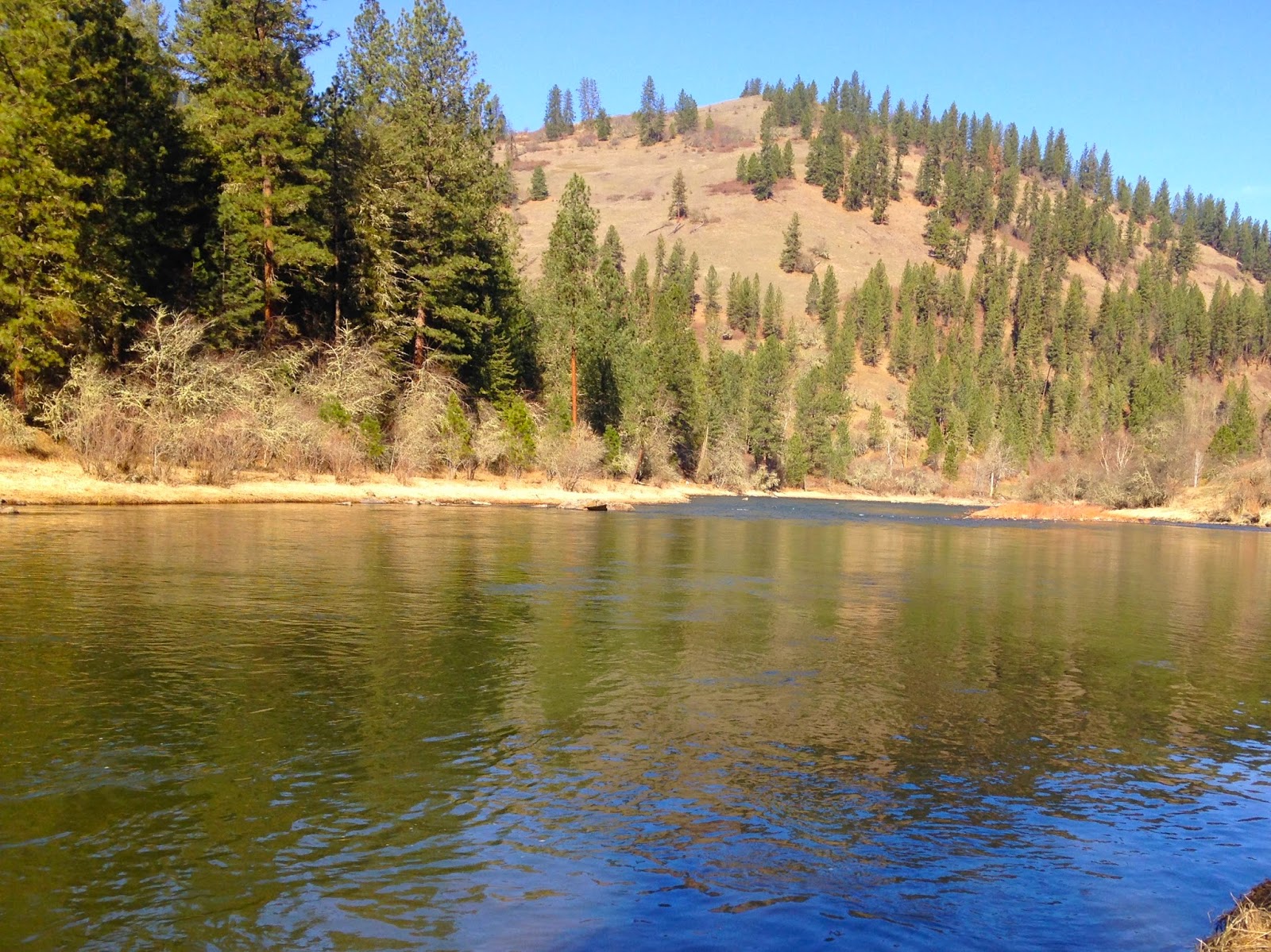 I ended up crossing the river to work the other side of the hole. When I arrived, I saw someone was holding a fish.  Could it be Roger?, I asked myself as I ran down, just across the stream from the guys. I looked over at them to see, surprise surprise, Ryan holding a fish. 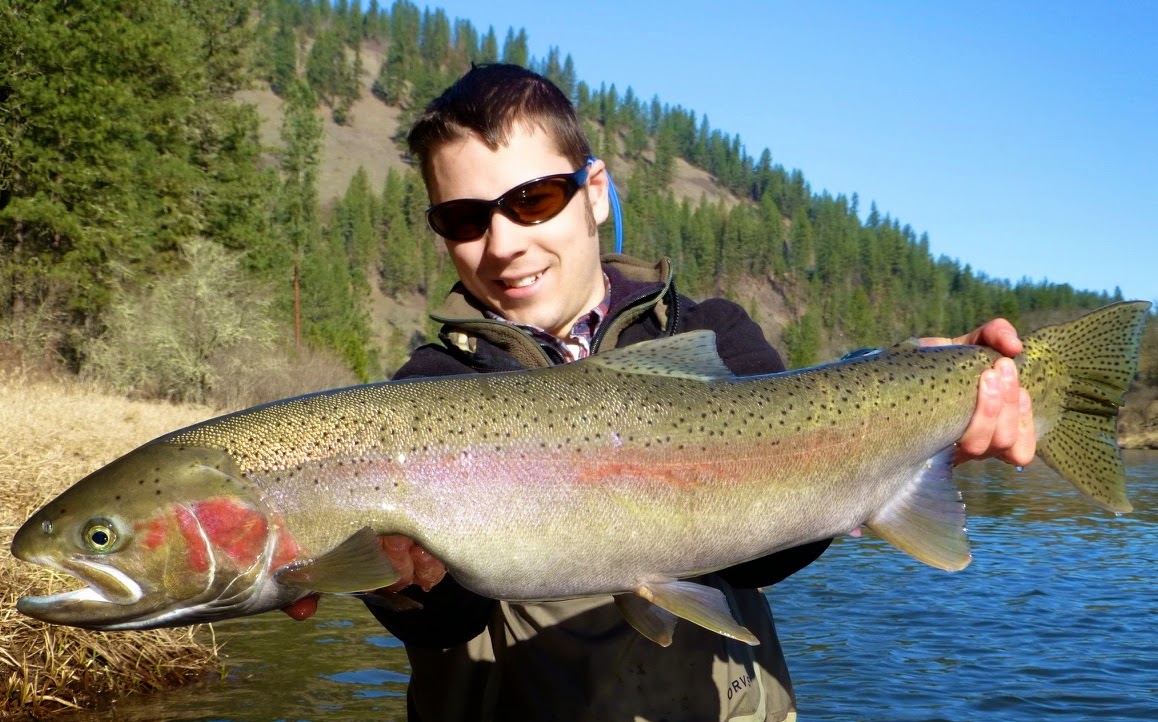 After Ryan placed his fish back into the water, I stripped out some line to make a cast.  The amount of slack-water was making it hard to get a good drift without disturbing my indicator, and every time the indicator would become disturbed, it would screw up my flies underwater.  Despite the challenge, I kept fishing and hoping my indicator would dart under. And it did! 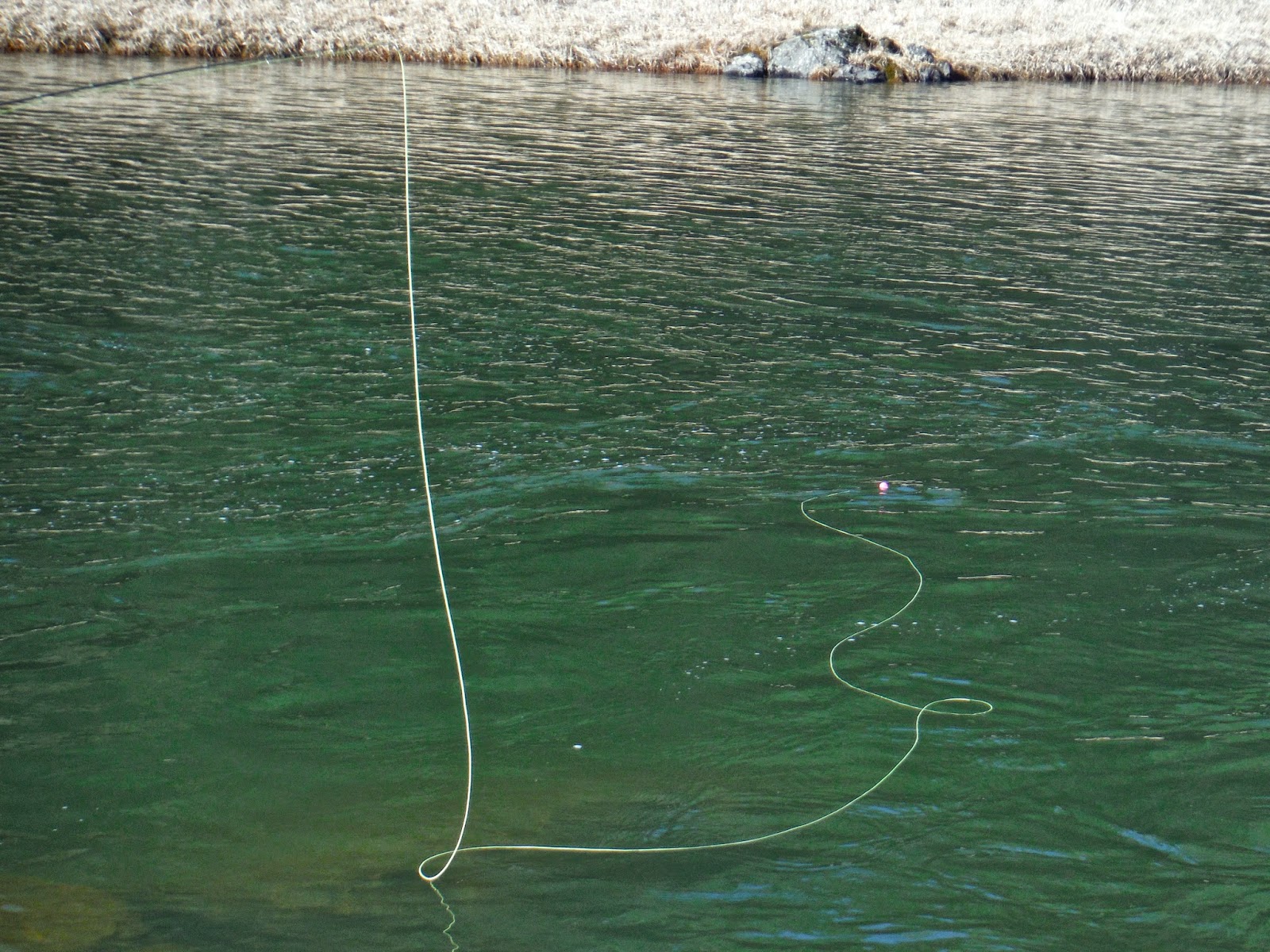 I sharply lifted the fly rod as it doubled over.
“Is that what we hope it is?” Roger asked from across the river.
“It’s a fish!” I yelled back, and the fight began.  The fish swam deep, and I jumped in the water to keep my line from getting tangled around the large rock just subsurface.  The force of every head shake was like trying to stop a train, but I did my best. 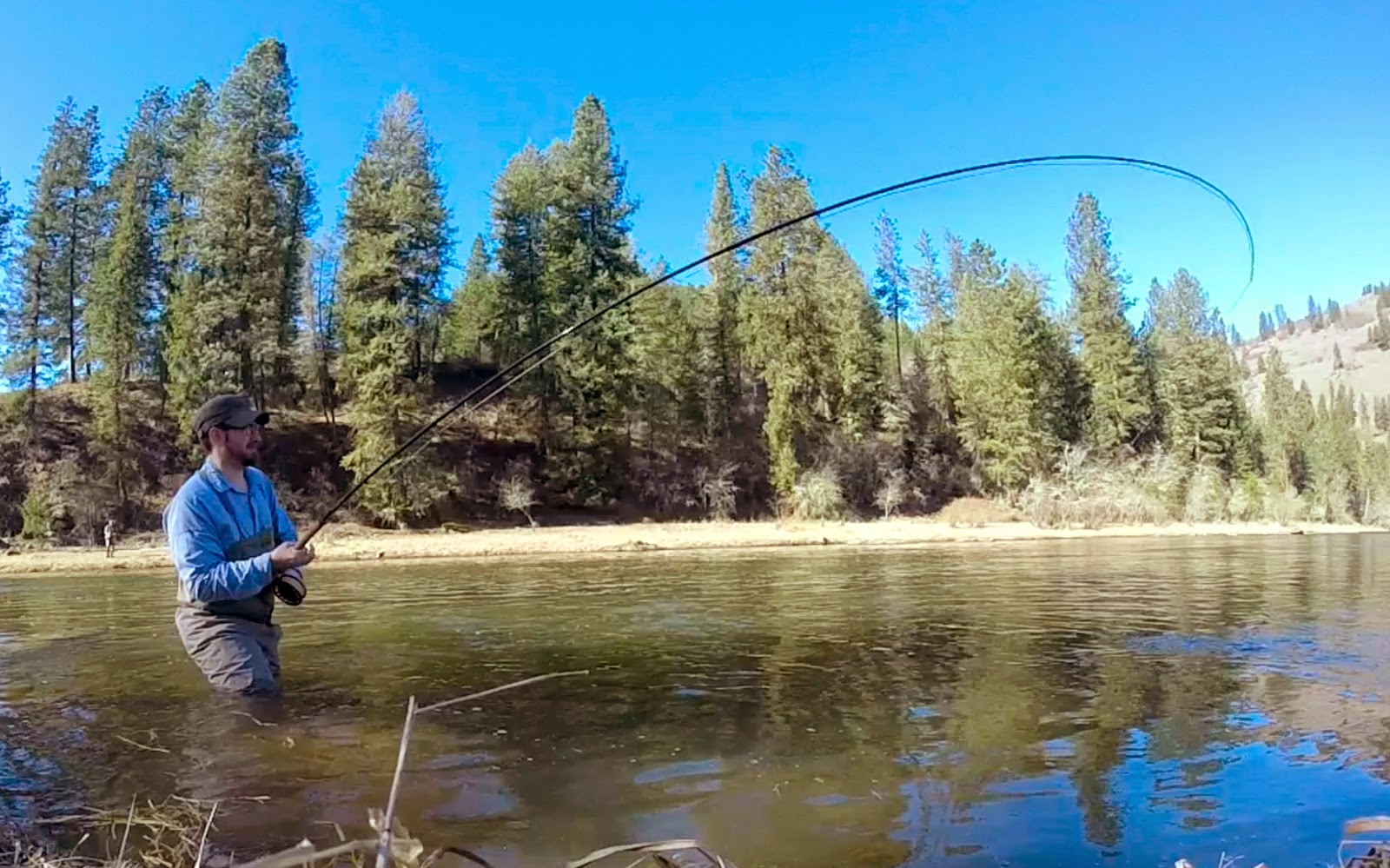 I brought the fish in, but there was no way I could land it without beaching it.  That’s when I saw Ryan running with the net. He had crossed the stream in record time to help me land my fish.  Without hesitation, Ryan extended the handle of the net and scooped up my fish, as if he had been doing this all his life. 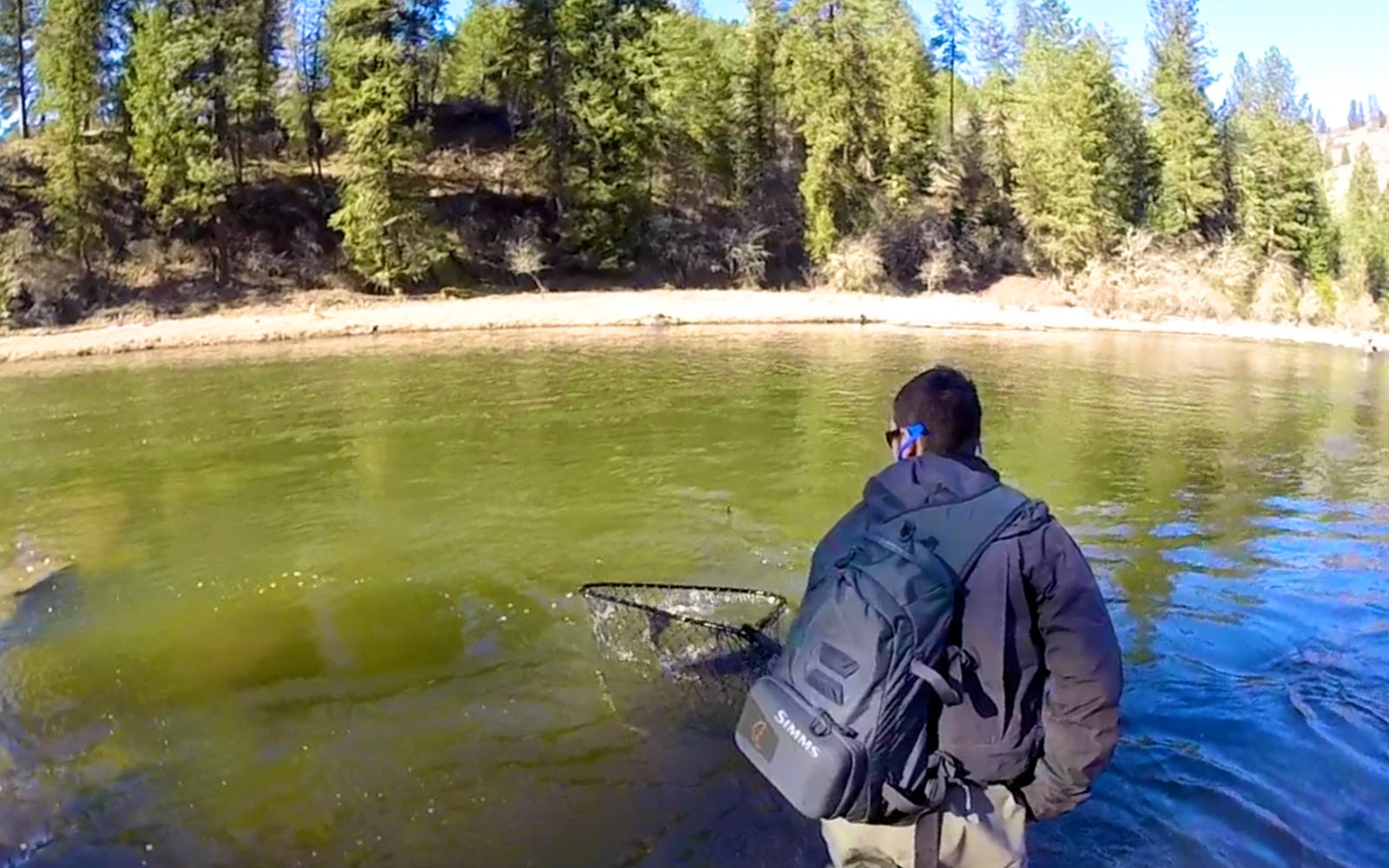 “I can’t believe it!” I said with a smile, as I looked at the size of the B-run steelhead.
“This is the big one of the trip, Erik.” Ryan said, before I picked up the fish for a picture. 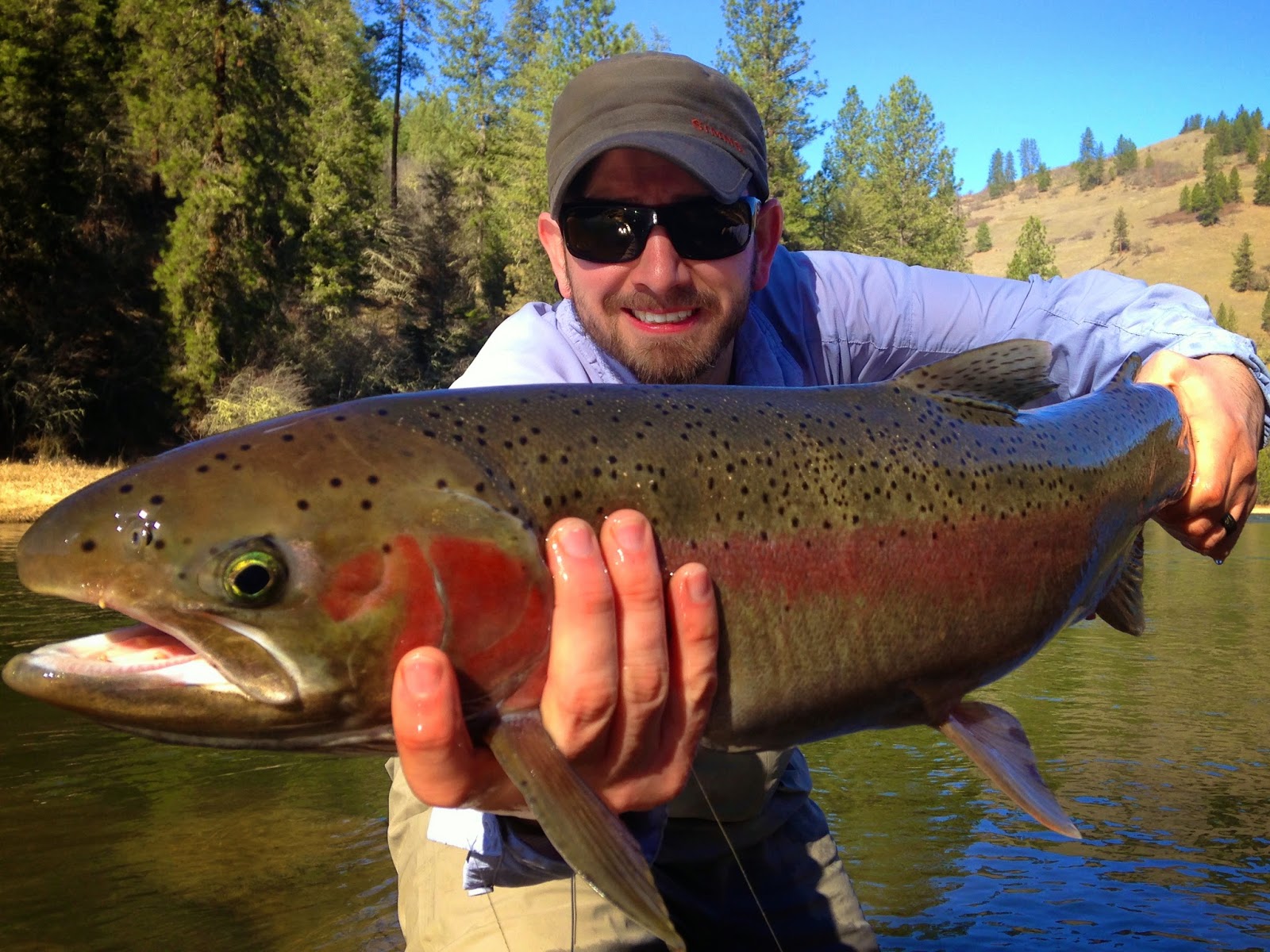 “I’m done for the day.” I said, after my fish slipped away. “This way I can say I landed a steelhead on my last cast on the Clearwater”.
By now Roger had crossed the river and was the last one to remain fishing while Ryan and I broke down our fly rods. 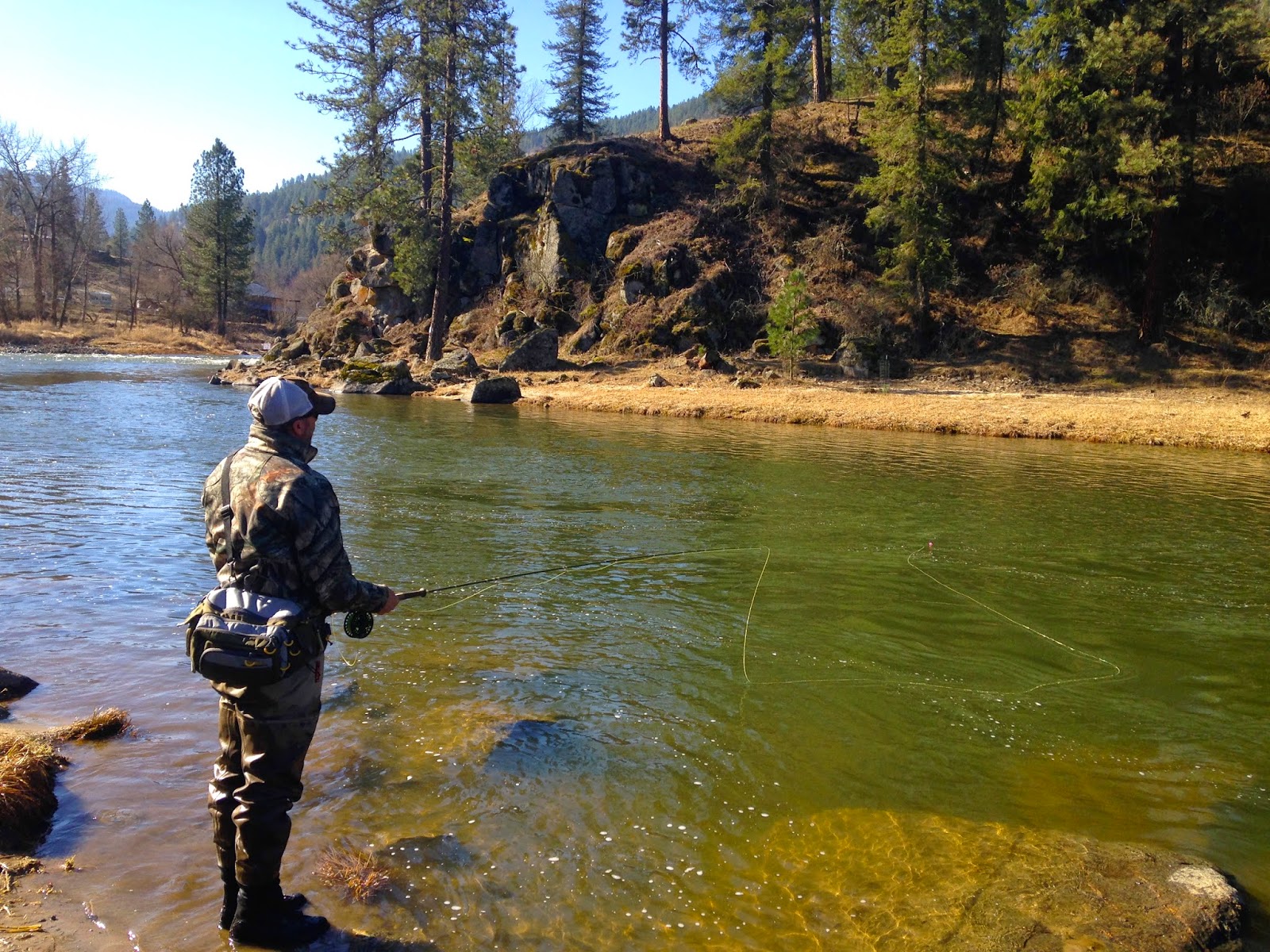 “This trip would have been much better if you would have brought in that fish, Roger.” Ryan said, as we headed home.
“Don’t let my not catching a fish ruin your idea of a good trip. This was a good trip, and I knew what I was getting myself into. This is steelheading; sometimes you catch a fish and sometimes you stand in a river casting all day. Sure, I would prefer to catch fish, but you have to put in your time. I’m happy you guys caught fish, and to be honest, this is a typical trip for me on the South Fork of the Clearwater. I fish while other people catch.” Roger said, before he finished, “And I would do it all over again if I had the chance.”
This is what I like about Roger. His philosophy on any experience in the outdoors is reflected as simply an experience that is never a bad time. It says a lot about a person who can walk away from a few days of fishing with no fish caught and still recognize a good time.  These are the kinds of people I like to fish with, because this is the kind of angler I would like to be.