Skip to content
The heater was at full-blast as we drove to one of Ryan’s favorite spots on the river.  I must admit, I wouldn’t have given this spot a second thought, but that is why we had Ryan with us: there was definitely a lot of learning that needed to take place today.  With our two-handed fly rods, we carefully made our way down the steep rocky embankment to stake out our spot. 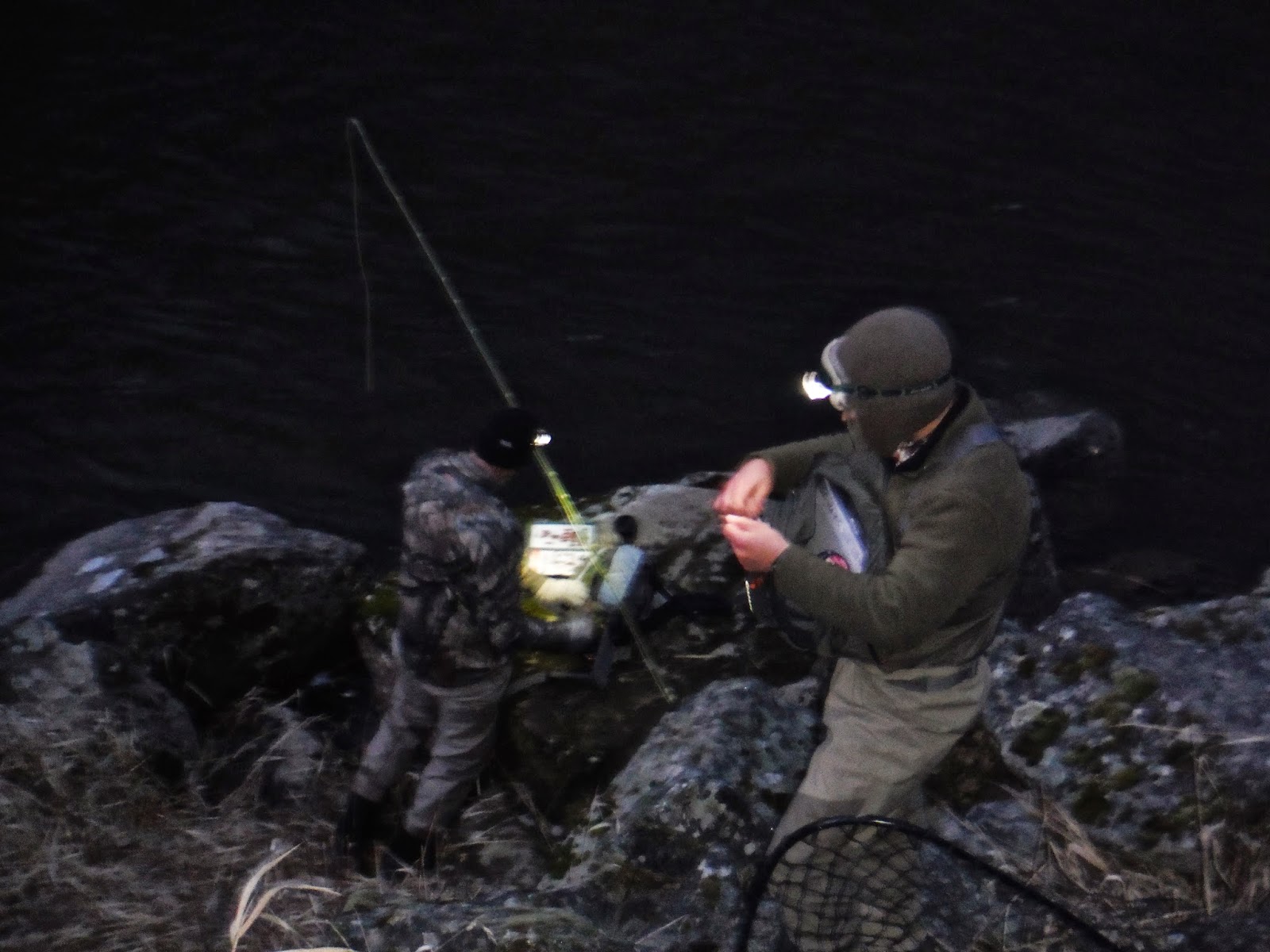 The cold, crispy morning slightly faded when the sun started to rise; not because it got warmer, but because we had something else to think about other than how cold it was: it was time to start steelheading! 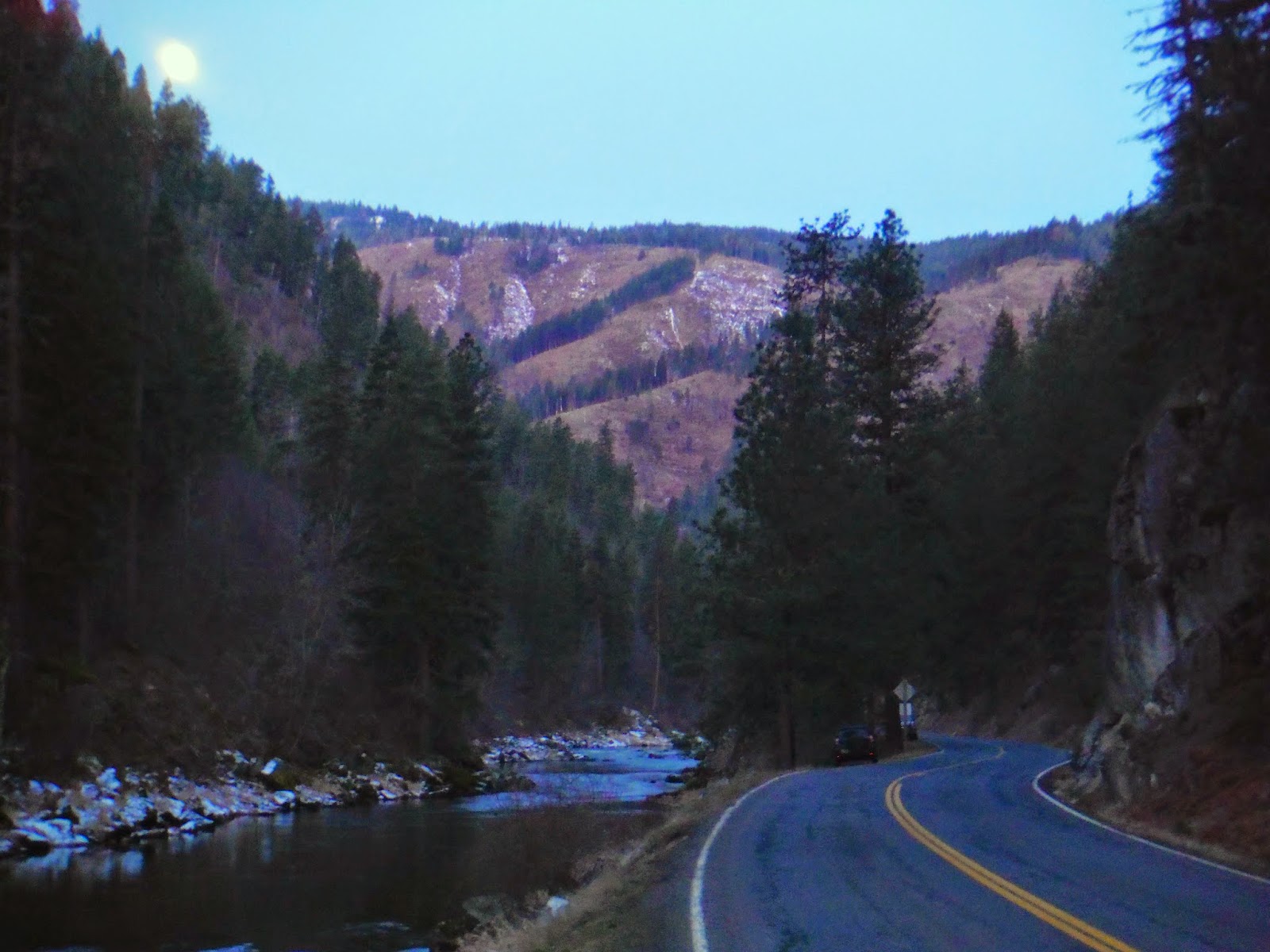 Ryan set Roger Philips and me up in a spot to fish, and together the three of us started working the water. 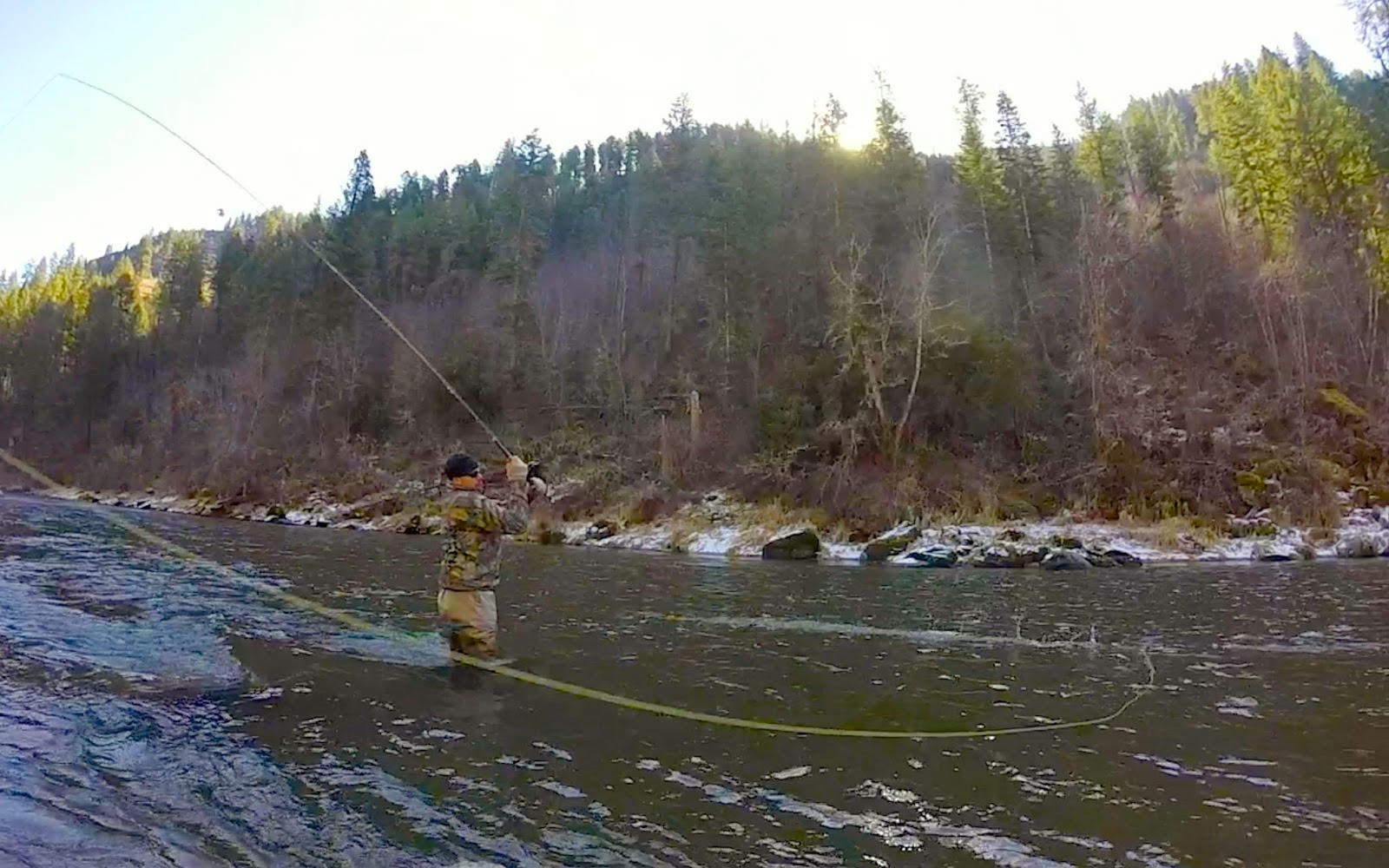 The two handed rods we were using offered up easy casting with no back cast needed.  Being able to flick out your flies with ease allows you to work the water very efficiently, hopefully increasing your chances of hooking into a large B-run steelhead.
“There’s one!” Ryan yelled, lifting the eleven foot switch rod high to set the hook.
After an hour or two of casting, someone hooking into a steelhead offers a nice distraction, even if it isn’t me. Roger grabbed the net, while I grabbed the camera and leapt over the rocks to get a shot of Ryan fighting his fish! 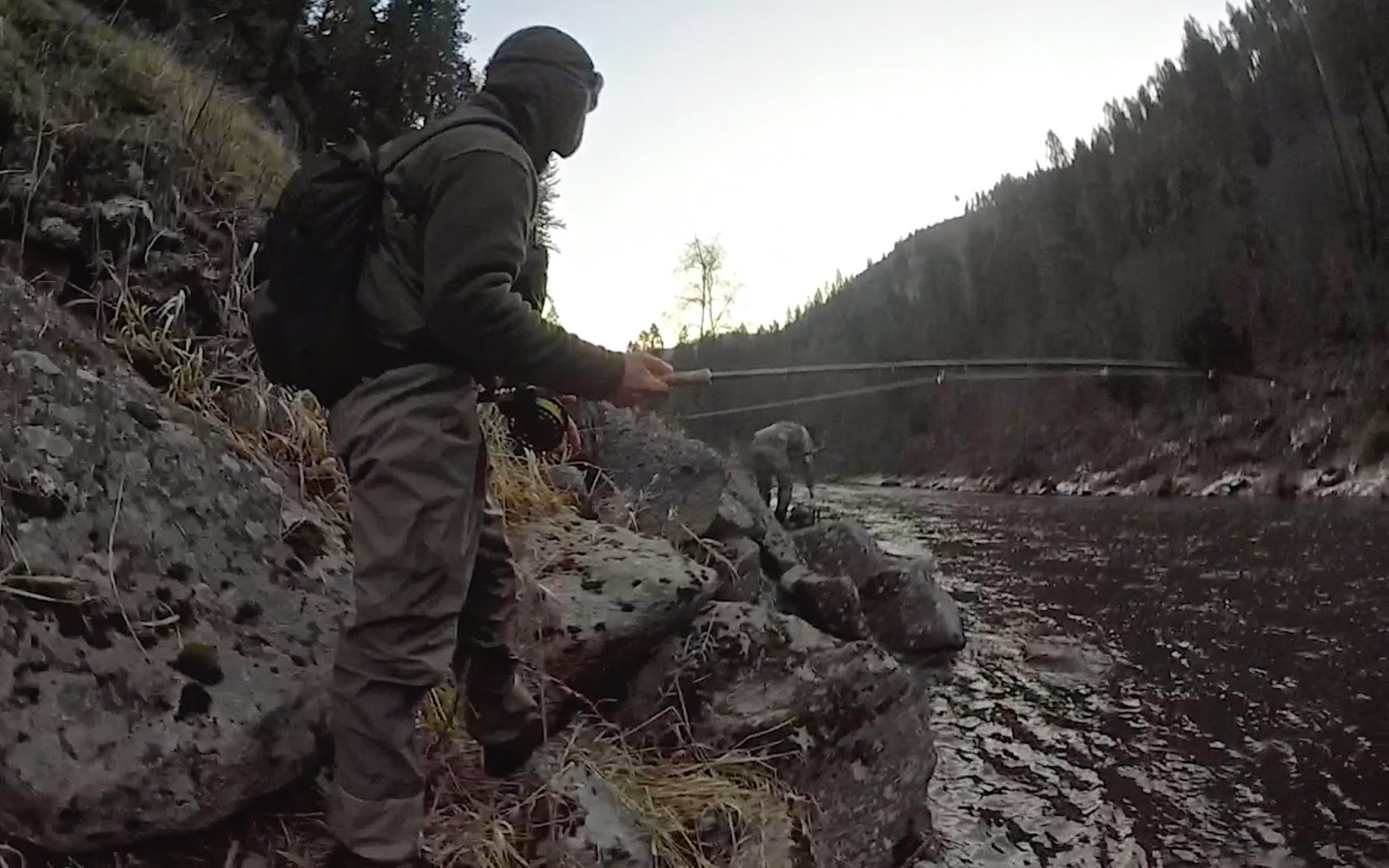 “It’s doing the steelhead-shake!” Roger yelled, watching the fish thrash underwater to spit the hook. Ryan kept the line tight, but the steelhead turned 180 degrees in a flash, causing the hook to pop out of the steelhead’s mouth.
The loll of losing the steelhead quickly faded once I hooked up. It is not uncommon for your indicator to go down due to a rock or stick on the river bed, which is what I thought had happened when I set the hook.  My rod bent over, but as I started pulling back on the line, it was coming in sluggishly as if I had hooked a stick.
“Guys, something’s weird here!” I said, stripping in my line before the full weight of a B-run steelhead became present.
“Your rod is bending like that because you hooked a fish, Erik!” Roger yelled over to me sarcastically, as if speaking to someone who had never caught a fish.
“Thanks, Roger!” I said back, with a smile. 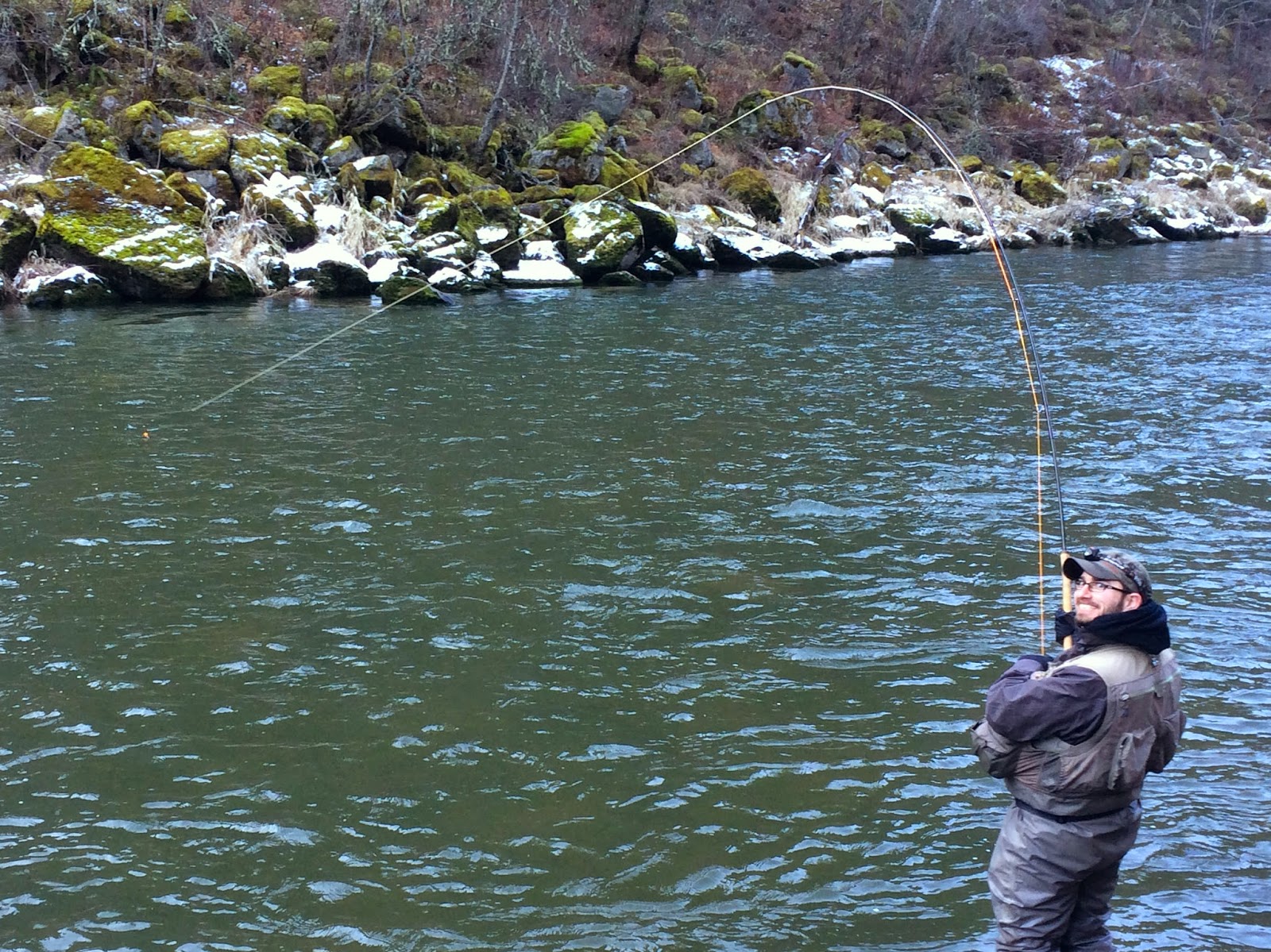 The immense weight of the fish was incredible, as I did everything I could to keep the fish at bay.  Roger stood with the net ready as the fish came into view. My hero shot is only moments away, I thought, then the fish turned and started swimming away!
“No, no!” I said, as I held the reel from spooling out any line and applied all the torque a thirteen-foot eight-weight spey rod had to offer. The steelhead would have none of it; the power of the fish was far more than I could manage, and I had to let it run back across the river where the hook popped out of its mouth.

The feeling of your line going slack from losing a fish is the worst! At least I got to see it, I thought, before we went back to fishing.  Roger moved downstream while Ryan went up to try out some new water.
“There’s another one!” Ryan said, and sure enough he was fighting a fish! 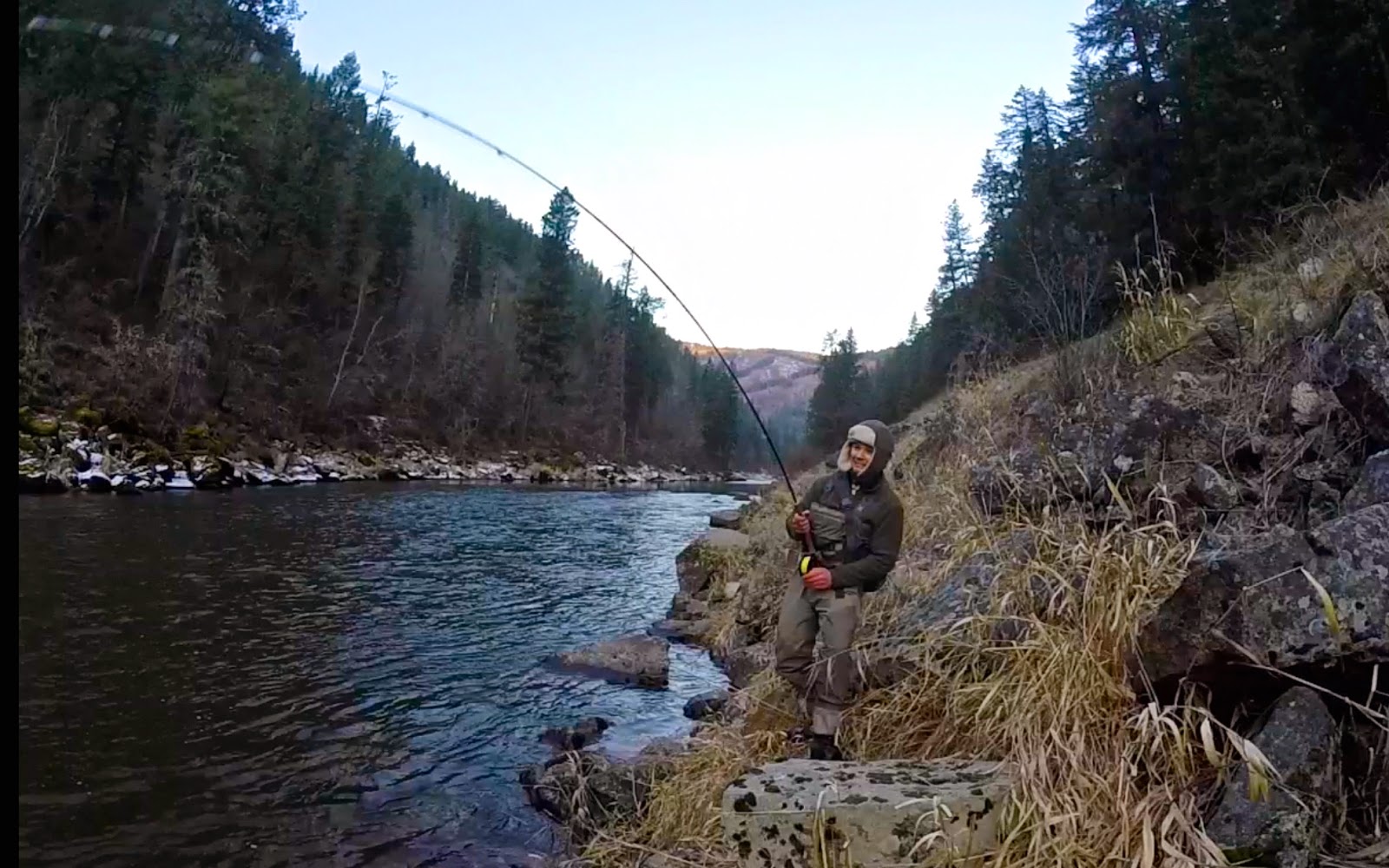 “This fish isn’t fighting too bad.” Ryan said, as he applied the pressure.  I had my Go-Pro in one hand while holding the net in the other to land the fish. The weight of the net was making it hard to maintain control while filming.
“Erik, what are you doing?” Roger scolded, “It’s one or the other!” It was true; it was a bad idea to try to film and net the fish, but with one big heave, Ryan brought the steelhead up enough for me to slip the net under and scoop up his fish! 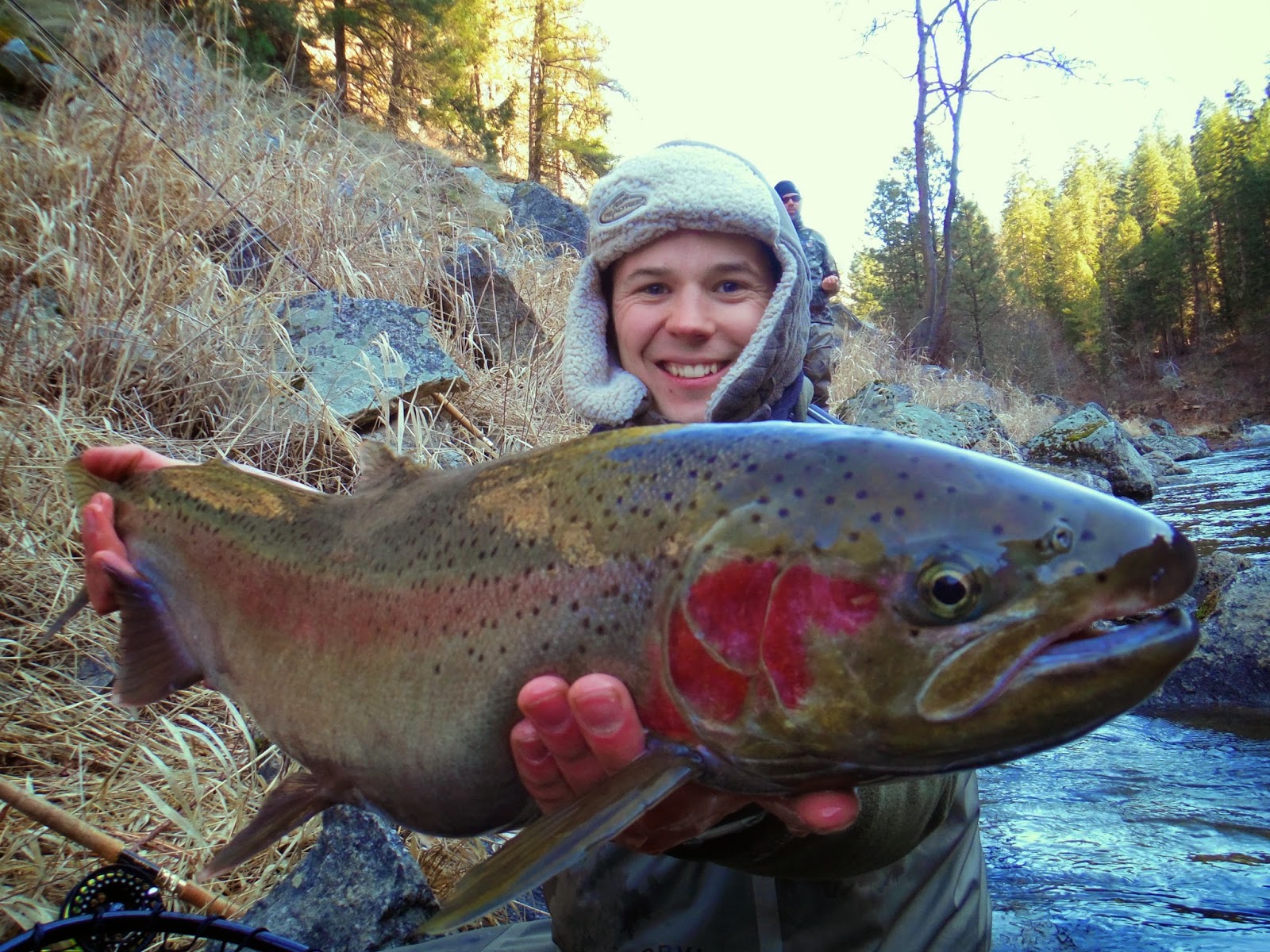 The first hero shot was out of the way, and that only fueled my determination to get my own. Though the sun was up, Ryan had us in a spot that did not get sun until after 11am.  The warmth of the sun was welcomed, and it wasn’t long after that when Ryan hooked  into another steelhead! 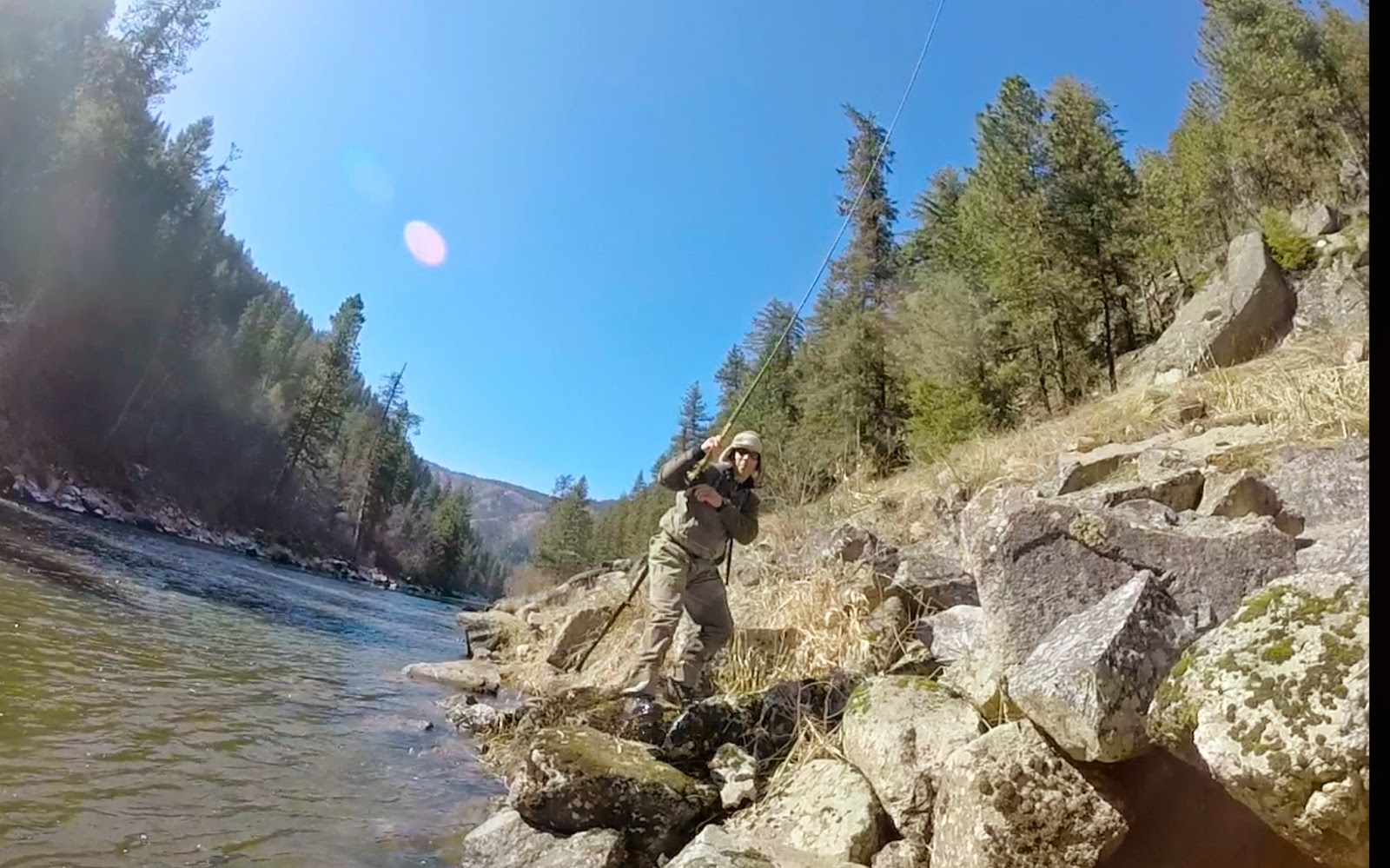 This steelhead was not cooperating like Ryan’s previous fish, as it continued to run further and further downstream.  Roger kept downstream from the steelhead, while Ryan rock-hopped on the bank to remain in control. There was finally a small opportunity to land the fish, and Roger didn’t pass up on it: he jabbed the net underwater fast, bringing it up around Ryan’s steelhead. 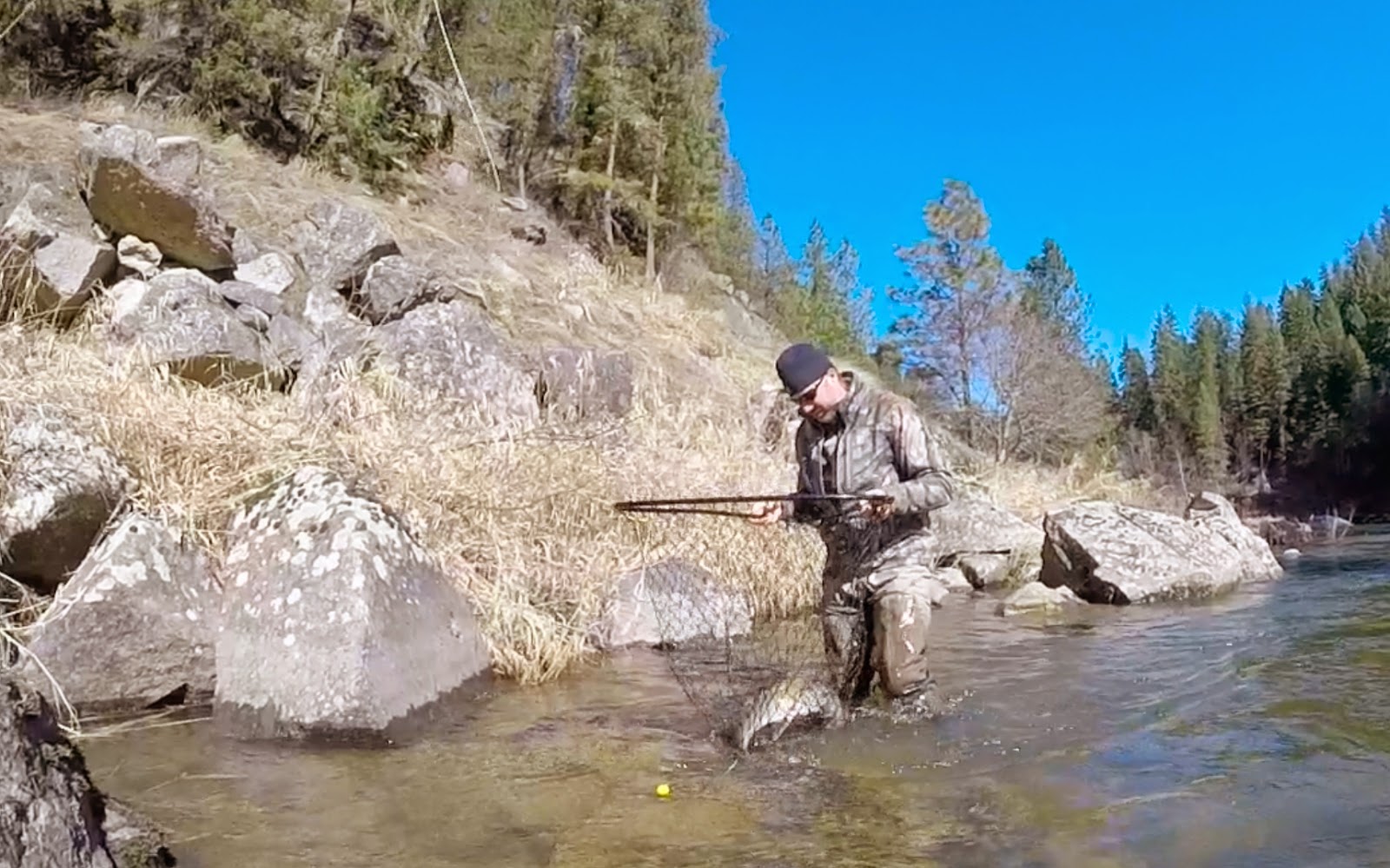 “Nice job, Ryan!” I yelled over, as he and Roger got the fish ready for a picture.
“I want, Roger in this one with me.” Ryan said, recognizing that without Roger’s help, this fish would not have been landed. 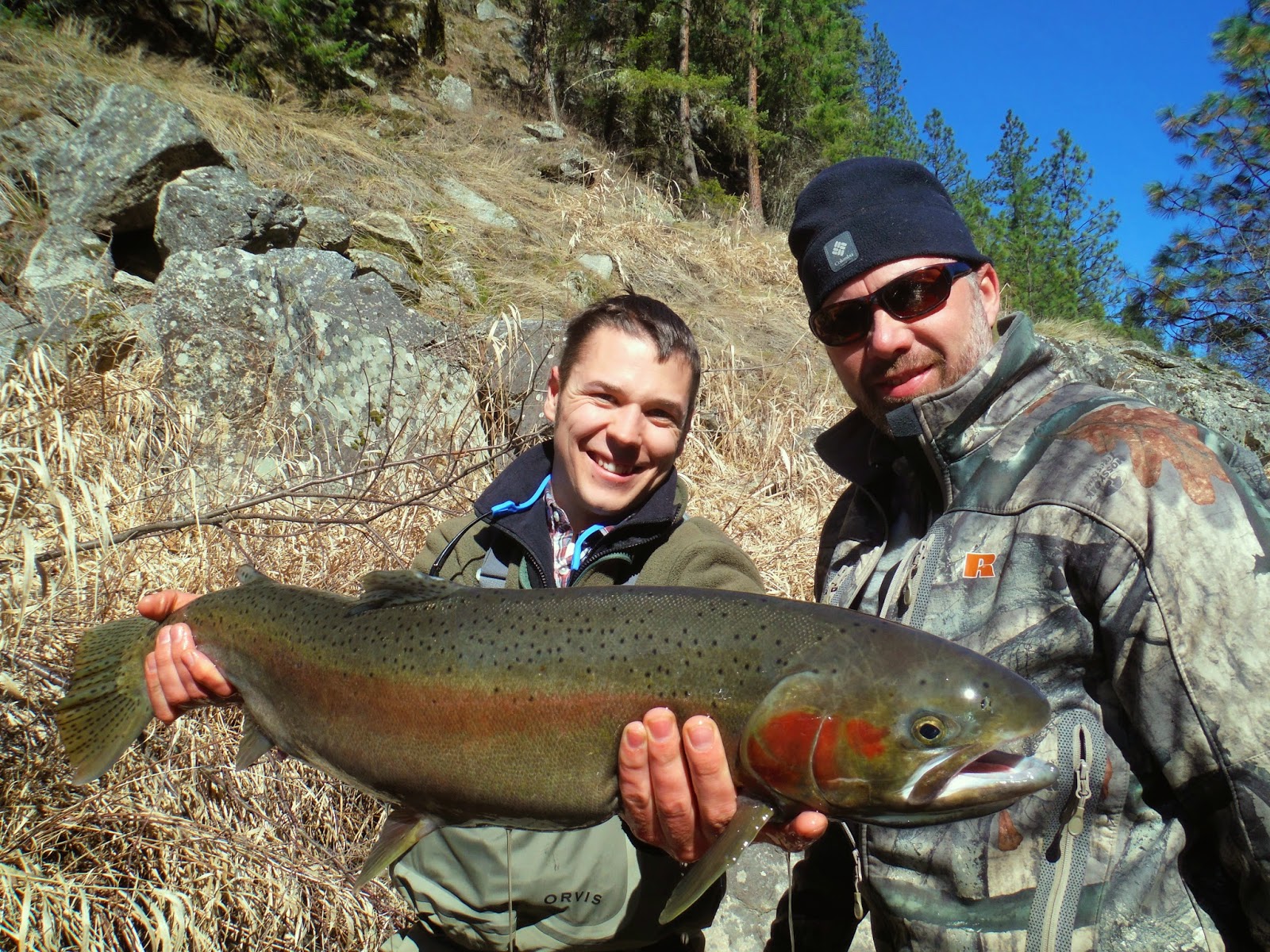 The steelhead was not happy, and definitely did not want its picture taken.  As soon as Ryan dipped the steelhead underwater, it kicked hard, forcing Ryan to let go! 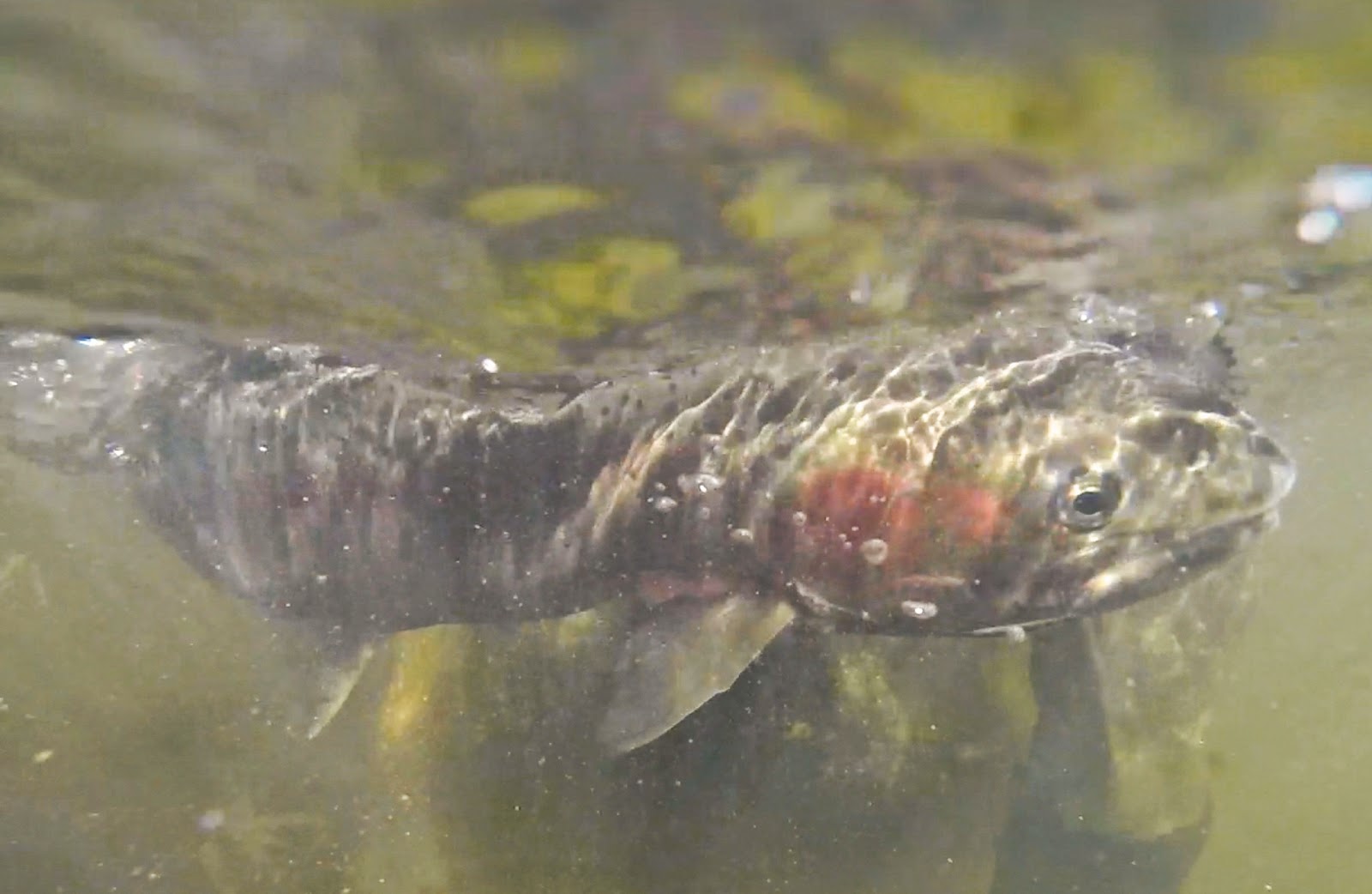 After spending the first portion of the day fishing one spot, we decided it was time to move on. We found a section on the river that looked good and, surprisingly, no one was there.  That moment alone didn’t last long.  A guy holding a spinning outfit came down the hill right next to me, and started fishing the same spot I was fishing.  At first I was a little taken back by it, and wanted to say something, but he seemed like a nice guy and he was yielding to my cast. It wasn’t long before he was joined by his daughter that had to have been less that eight years old. He began to instruct her how to fish near a fly angler, and she was doing well. I decided I was better off letting the kid have the spot. After all, getting youth into any kind of fishing is good with me!
“Why don’t you and your daughter fish this spot.” I said to the man.
“Seriously?” He asked.
“Yeah, I’m not terribly comfortable casting this spey rod with your kid near by anyway.” I said, adding, “And it’s better that she fish in a spot she is comfortable.”
Little did I know that the man was a local angler, and knew this river like the back of his hand.  He was so grateful to me, he began to share locations on the river that only a local seasoned angler would know, including information that was new to Ryan. After a quick talk with Ryan and Roger, we moved to the new hole, and Ryan was hooked into a steelhead in just a short amount of time! 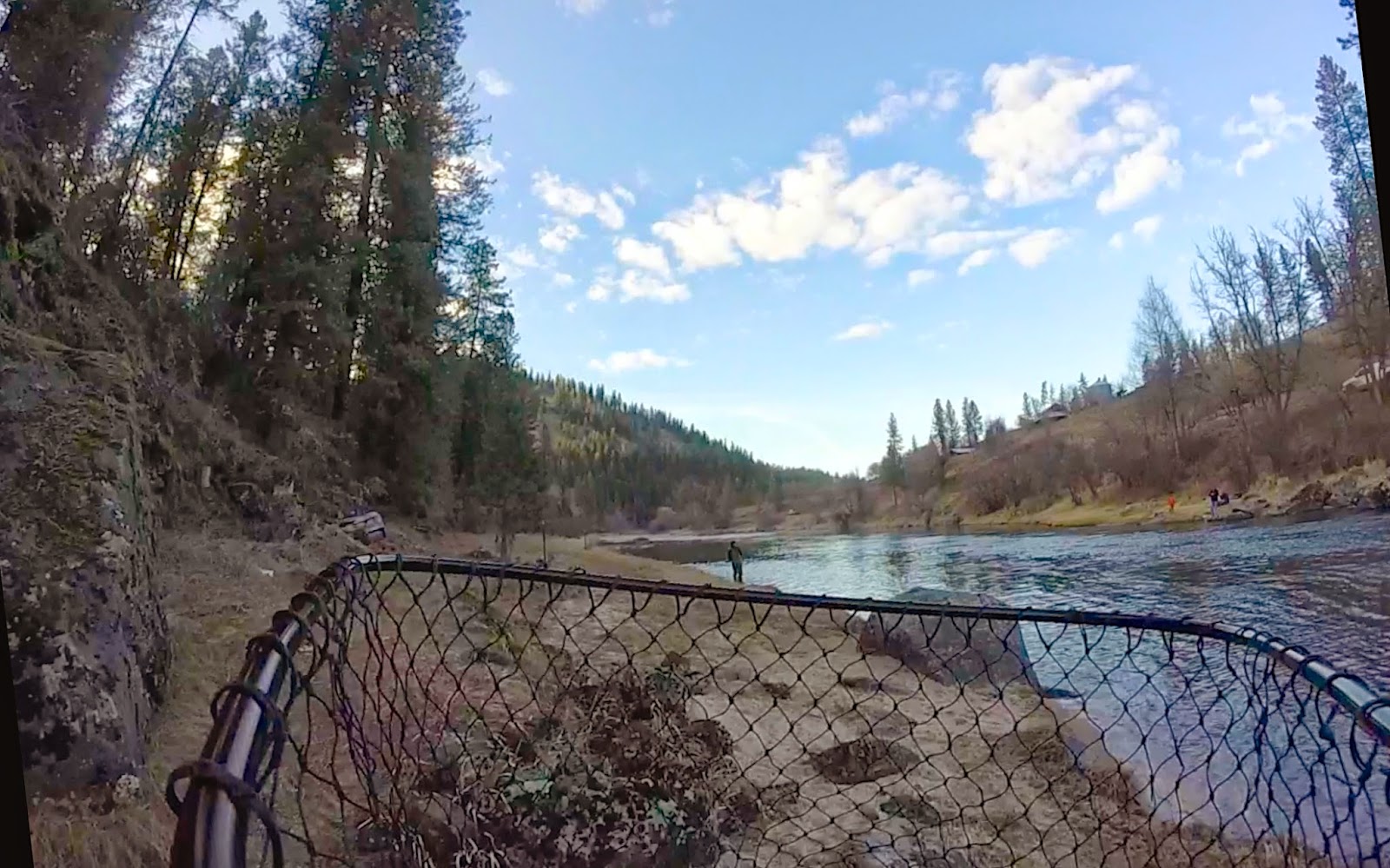 “Erik!” Ryan yelled from the distance, and I came running with the net. Another beast of a steelhead was netted for a hero shot! 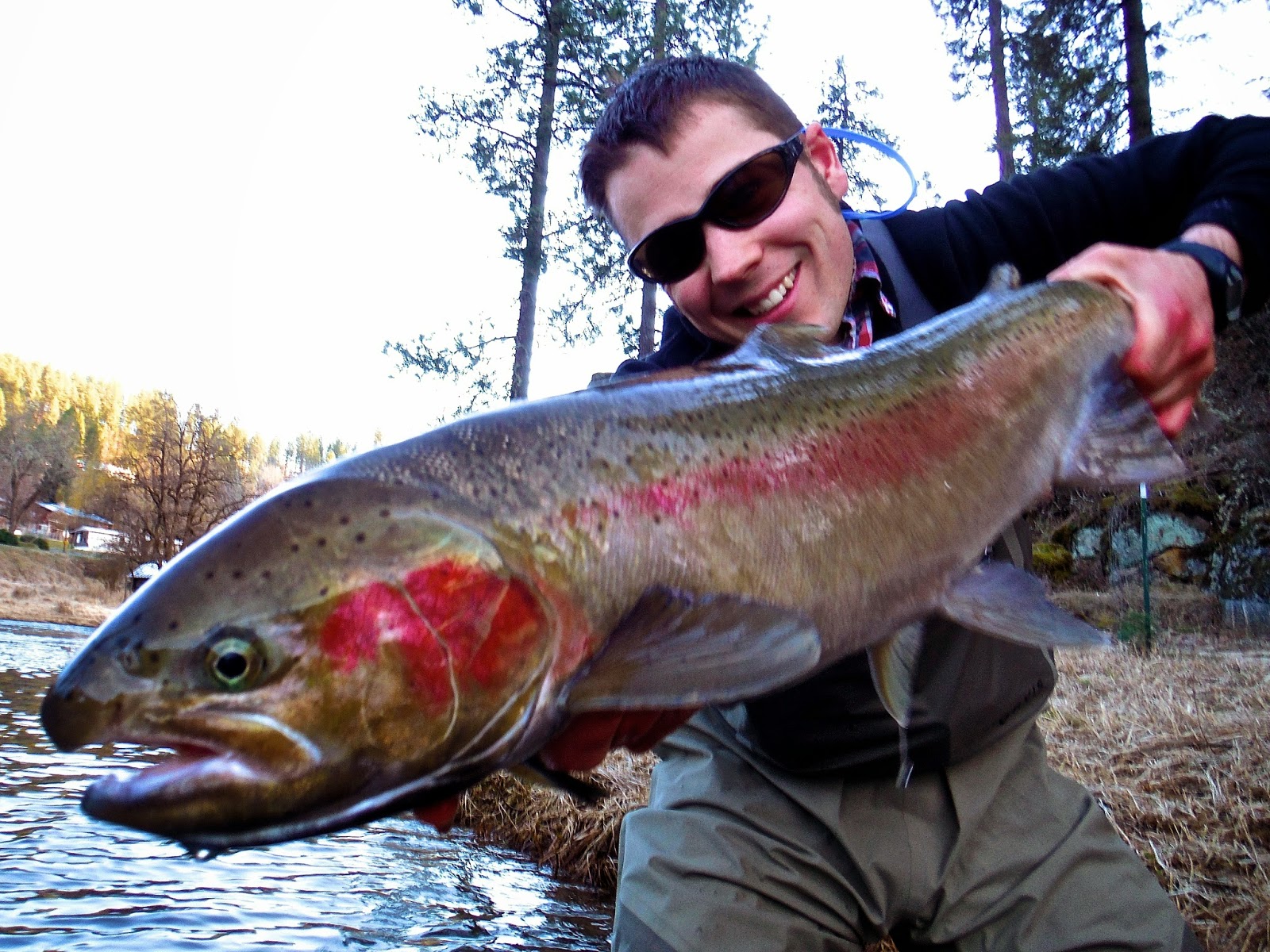 “It’s your turn, Erik! You need a hero shot.” Ryan said, as he dipped his steelhead into the water, and it kicked hard to return home. 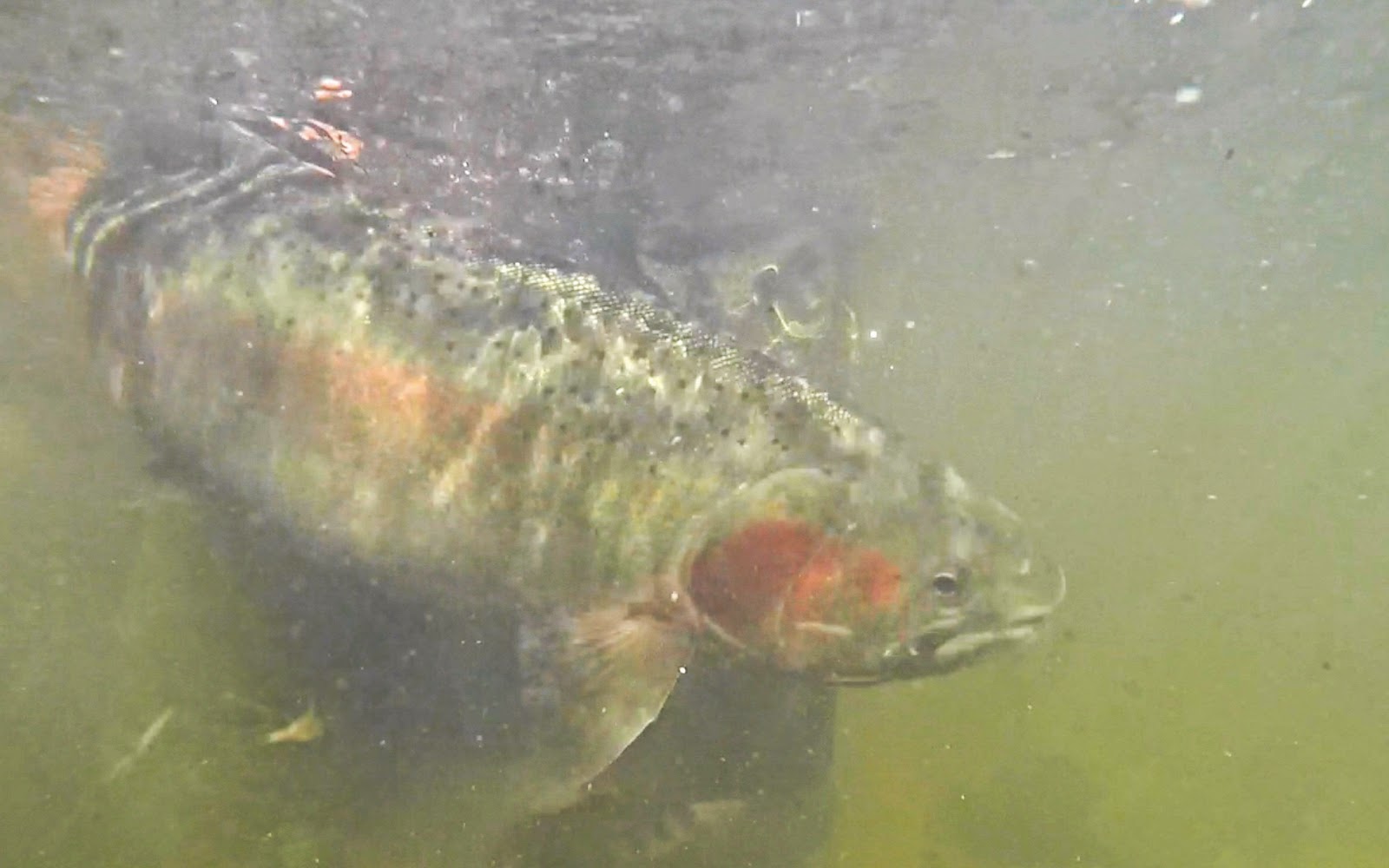 Ryan offered me the spot he had hooked his steelhead, and I immediately started to fish.  A large circle C cast, and I put my flies where they needed to be.  My indicator sank under and I wrenched back on the spey rod to set the hook! 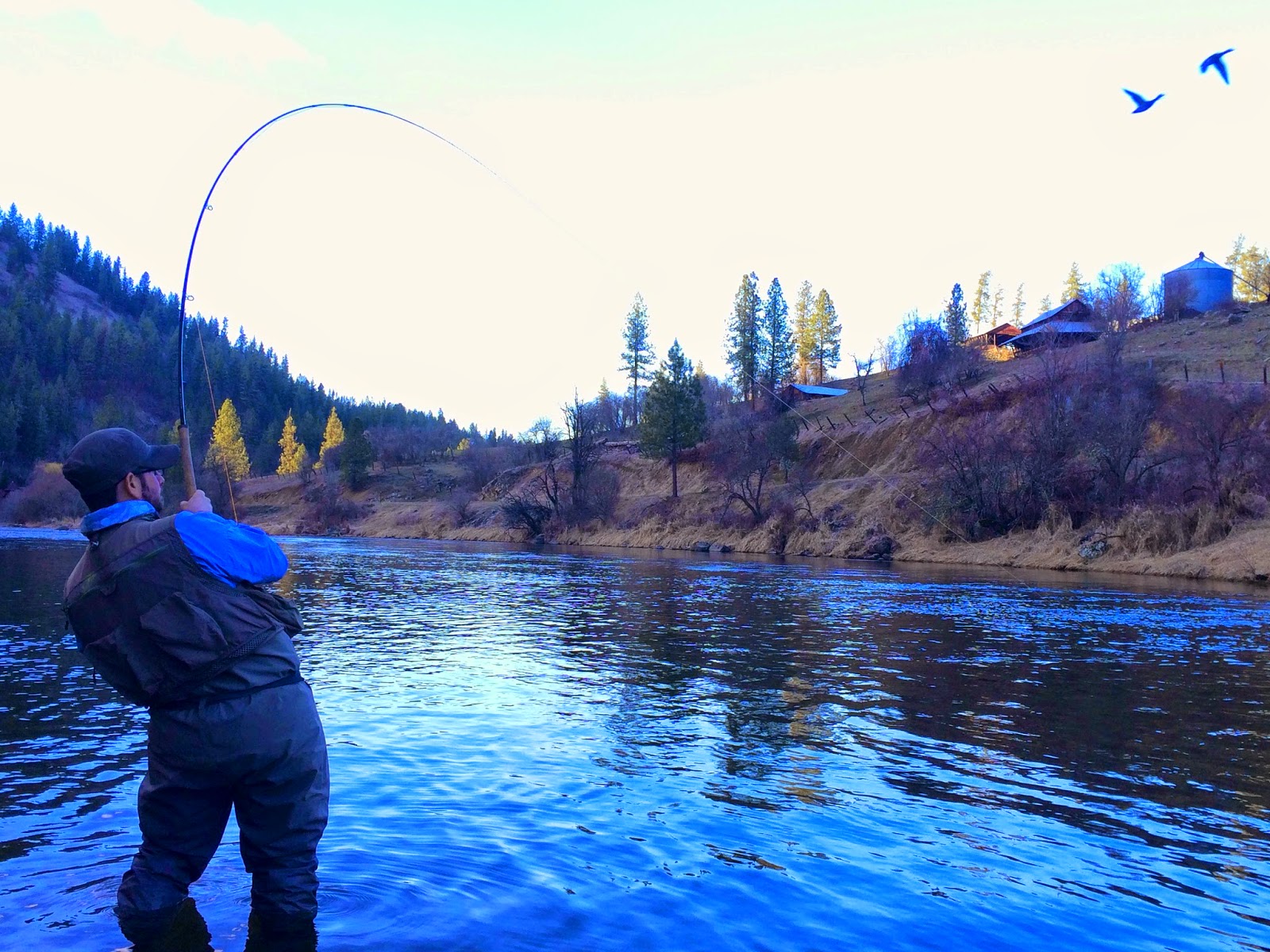 Nothing was happening; my rod stayed doubled over for a few seconds until I felt the unmistakable jolt of a steelhead!
“RYAN, I GOT ONE!” I screamed.
“Eriiiiik!” Ryan yelled, in full sprint. The steelhead was putting up a great fight, but I was not giving the fish an inch. The fish turned to dive, but if you thought I had the torque on the fish before, it was nothing compared to what I was doing now.  The thirteen-foot rod was completely arched over like it was a full flex fly rod, and the fly line was so tight you could pluck a crisp A note! 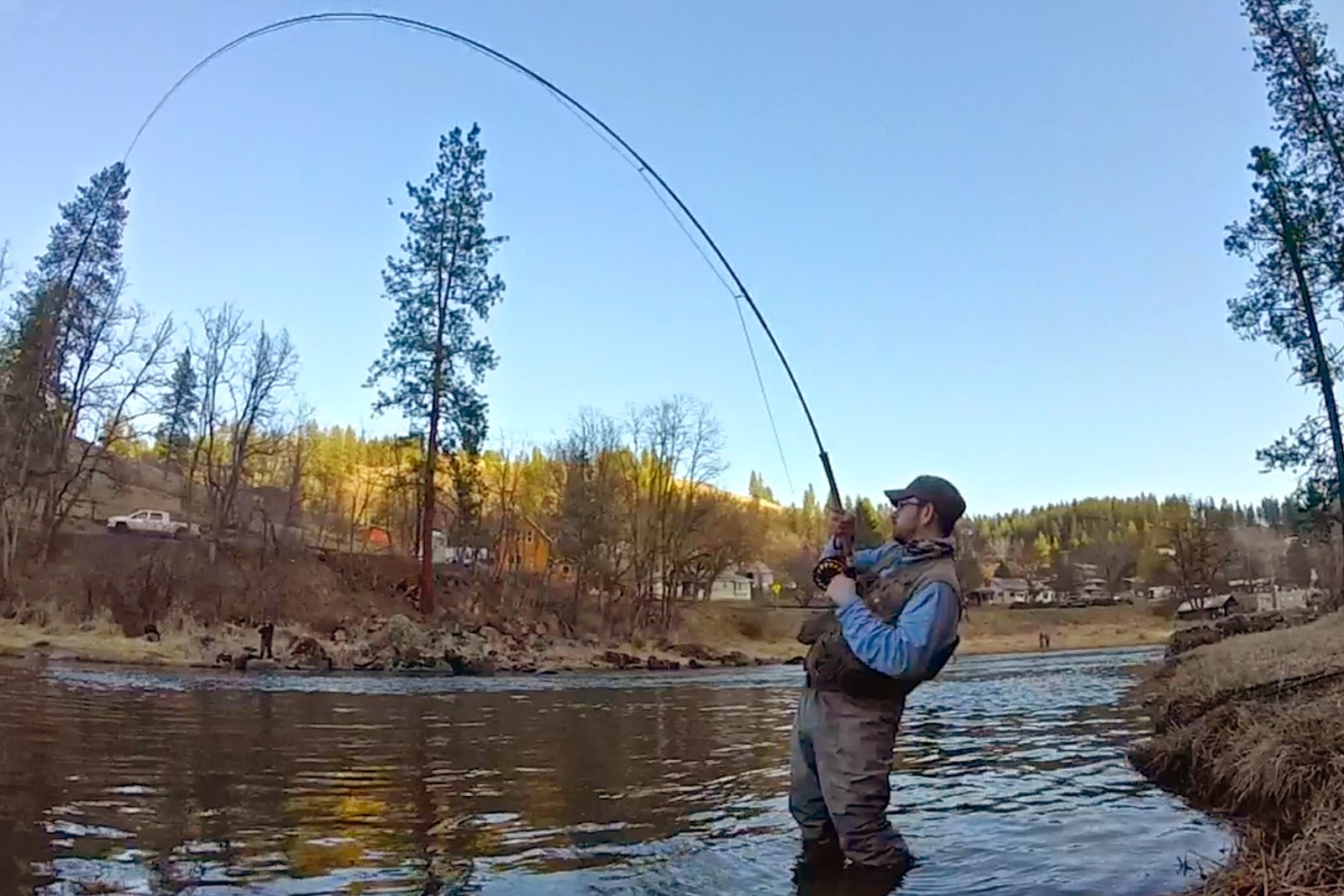 The eight-minute fight with a B-run steelhead felt like twenty minutes. My forearm was burning from exhaustion, and the looming fear of losing the fish was ever so present. 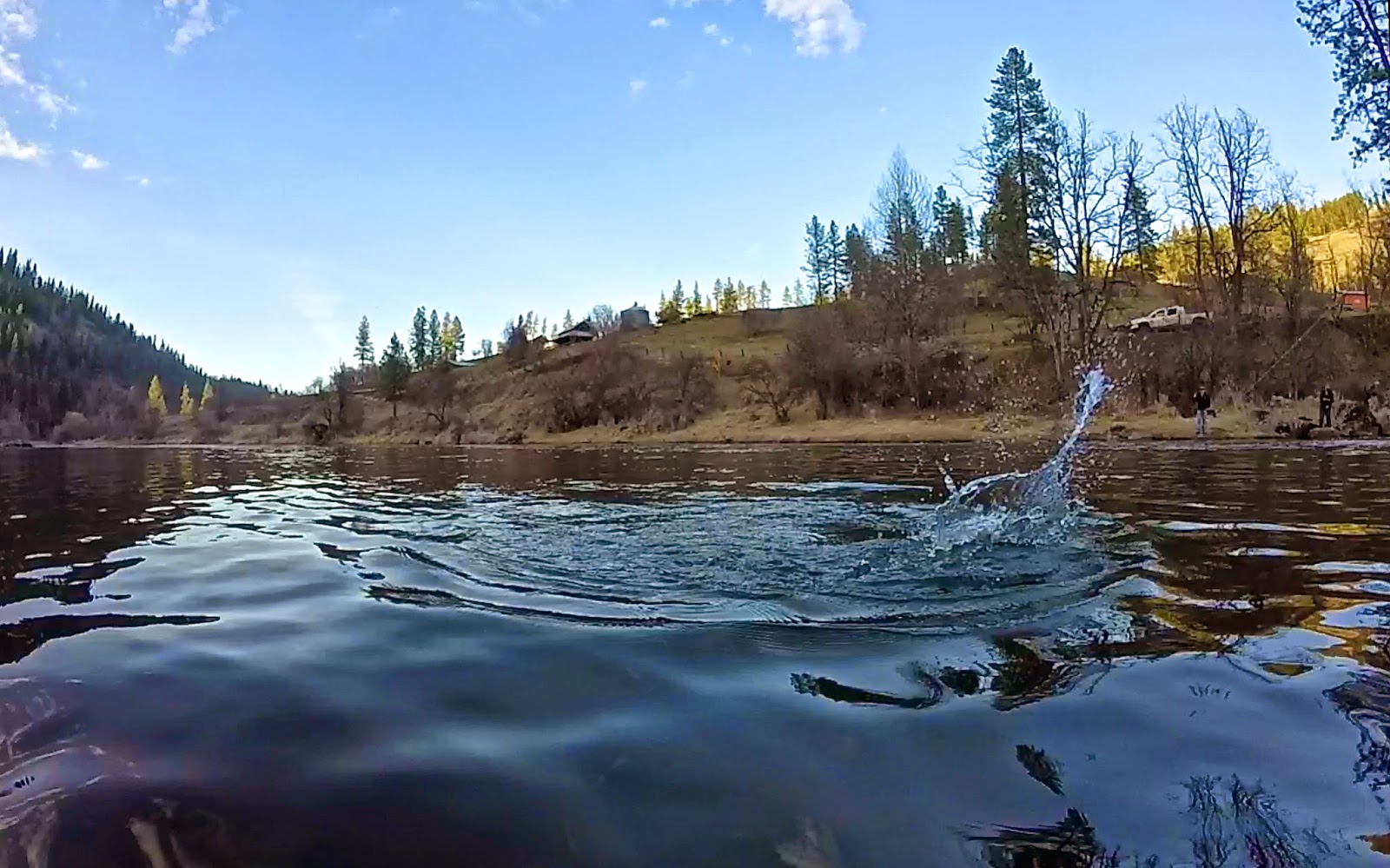 I backed out of the water and got behind Ryan, who was ready with the net. The head of the fish was up, and Ryan made a dash for the fish! The fight was over, I had successfully landed my very first B-run steelhead. 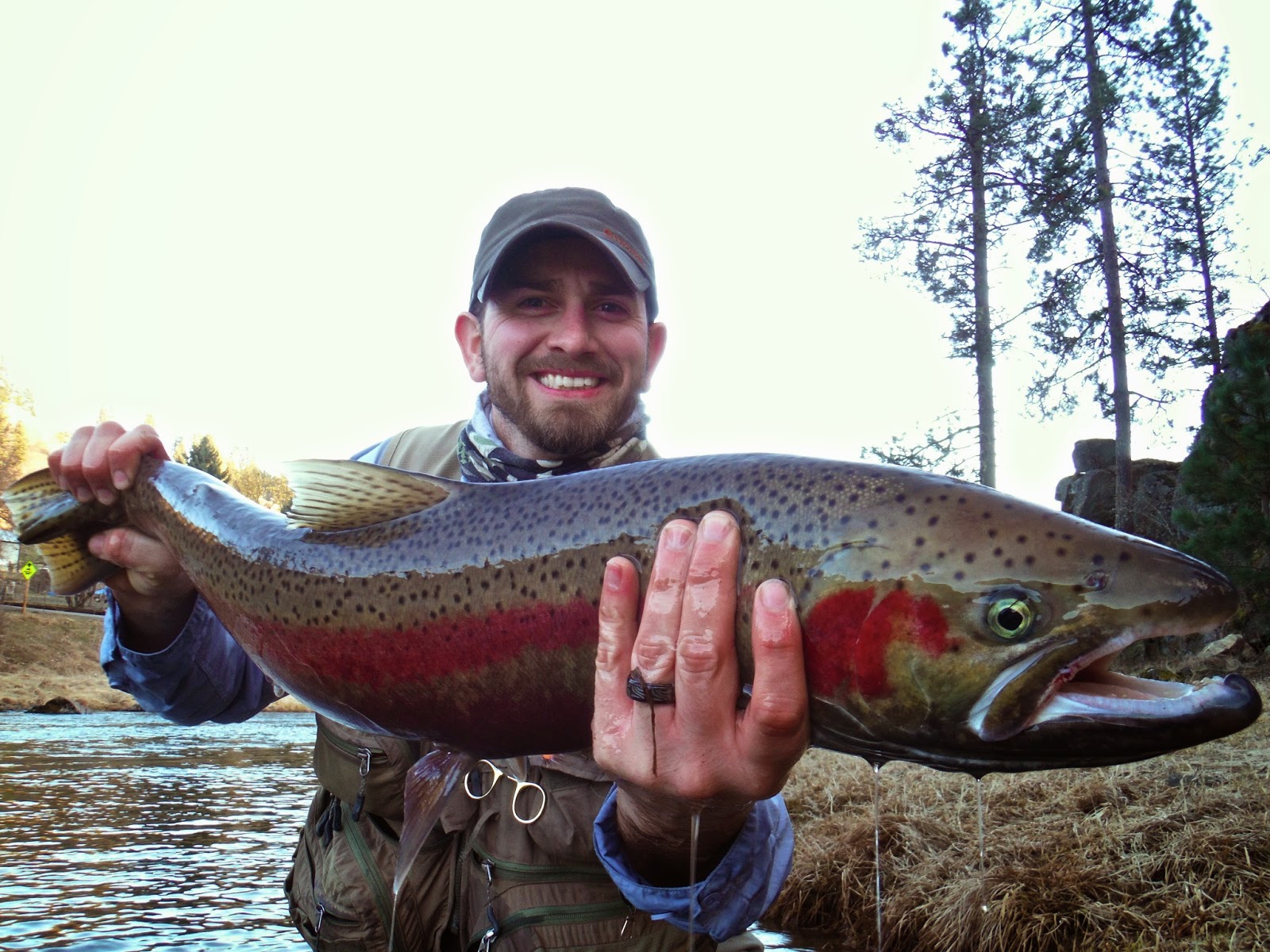 The size and girth of the fish was unreal, and one could easily get lost in the shades of olive that paint the fish. Tons of spots cover its back, but not one touches another. The scarlet stripe running from cheek to tail is unmistakable, and its wild hazel eyes that stare right back into yours command respect.
The sudden force of the fish kicking to leave your hands is something you need to experience for yourself, and in the end Ryan extended his hand of a job well done; what an awesome accomplishment! 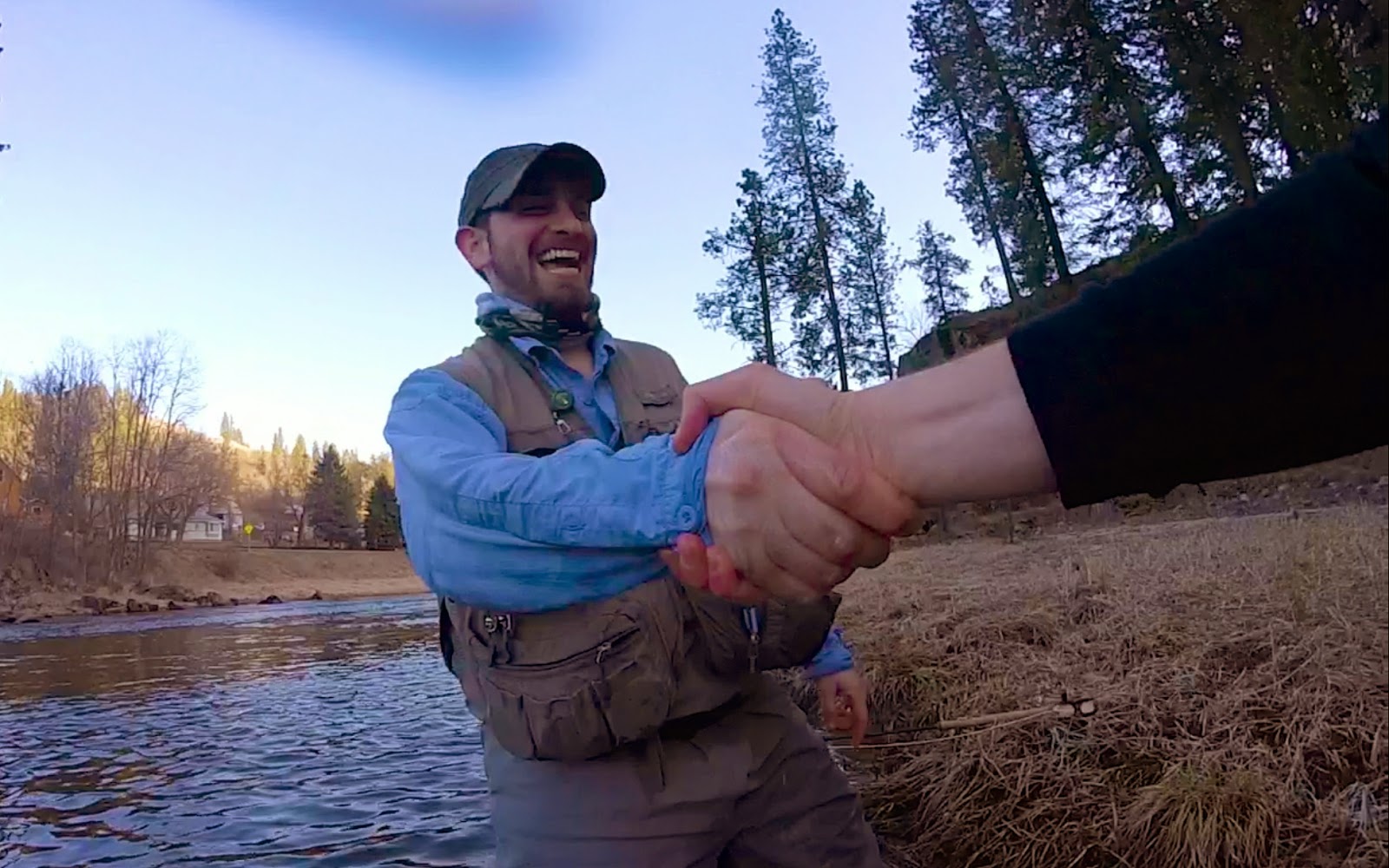 “This is a typical day on the Clearwater for me, watching other people catch fish.” Roger said, as we finished for the day.  Roger slipped back into this tent, while Ryan zipped himself back in his.  I, on the other hand, fashioned myself a bed in the back of the Rav, where it was comfortably warm.  No longer envious of my dog, I was out before my head hit the pillow, ready for whatever tomorrow would bring.

1 thought on “Steelheading day one: The Hero Shot”