Skip to content
“So, why do we wear a belt?” Shawn asked after wading up on the bank of the South Fork of the Boise River. This is the second time Shawn has been fly fishing, so everything is still new to him.
“The belt will stop water from filling up your waders if you fall in.” I explained, as I flung on my vest and added some specific fly boxes before I looked over to see how Shawn was coming along.
“What the heck are you doing?” I said, “that is not where a belt goes!” 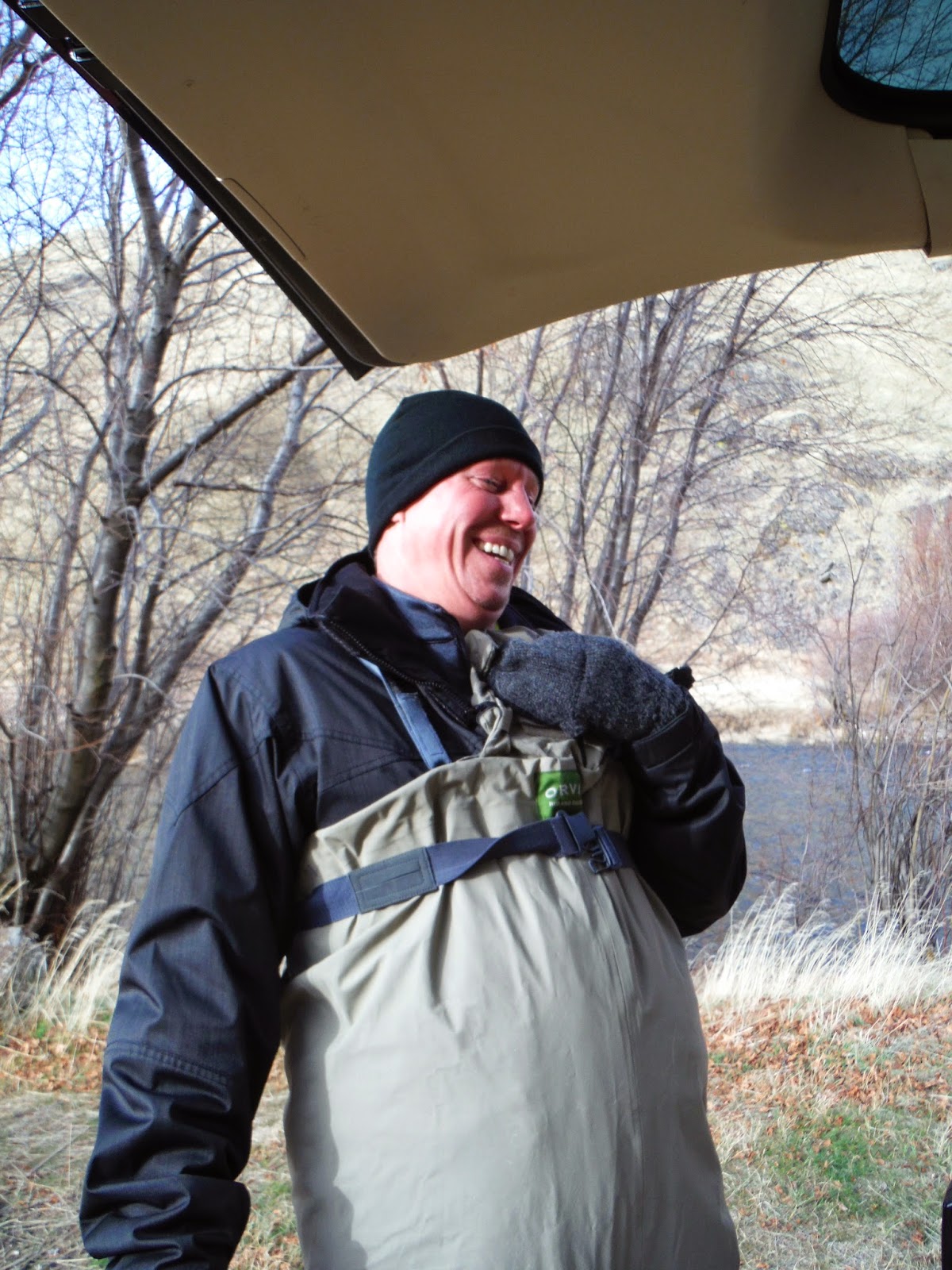 “Dude, if I fall in I want the water to stop right here!” Shawn said, pointing at his chest where his wading belt was secured.
“Oh my God, you are kidding me!” I said, recognizing another huge flaw.
“What did I do now?” Shawn asked.
“Look at how you have your belt secured!” I said, pointing.  Shawn looked down at his belt.
“Oh.” He said.
“Geez, you are such a newb.” I said with a sigh. 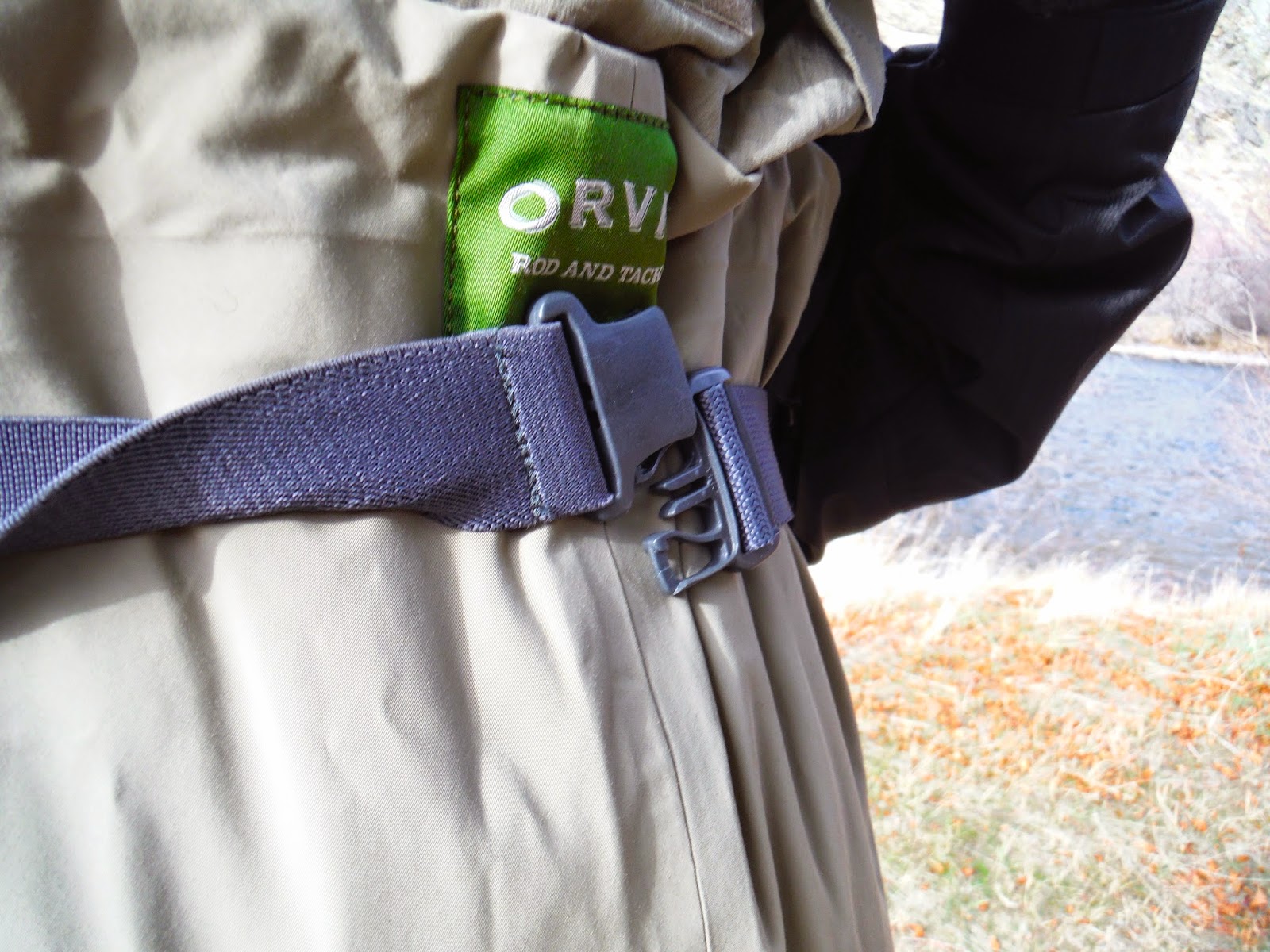 Some quick adjustments to his belt and Shawn was ready to hit the water.  We made our way into position where he started nymphing. I stood back, giving bits of direction when needed. 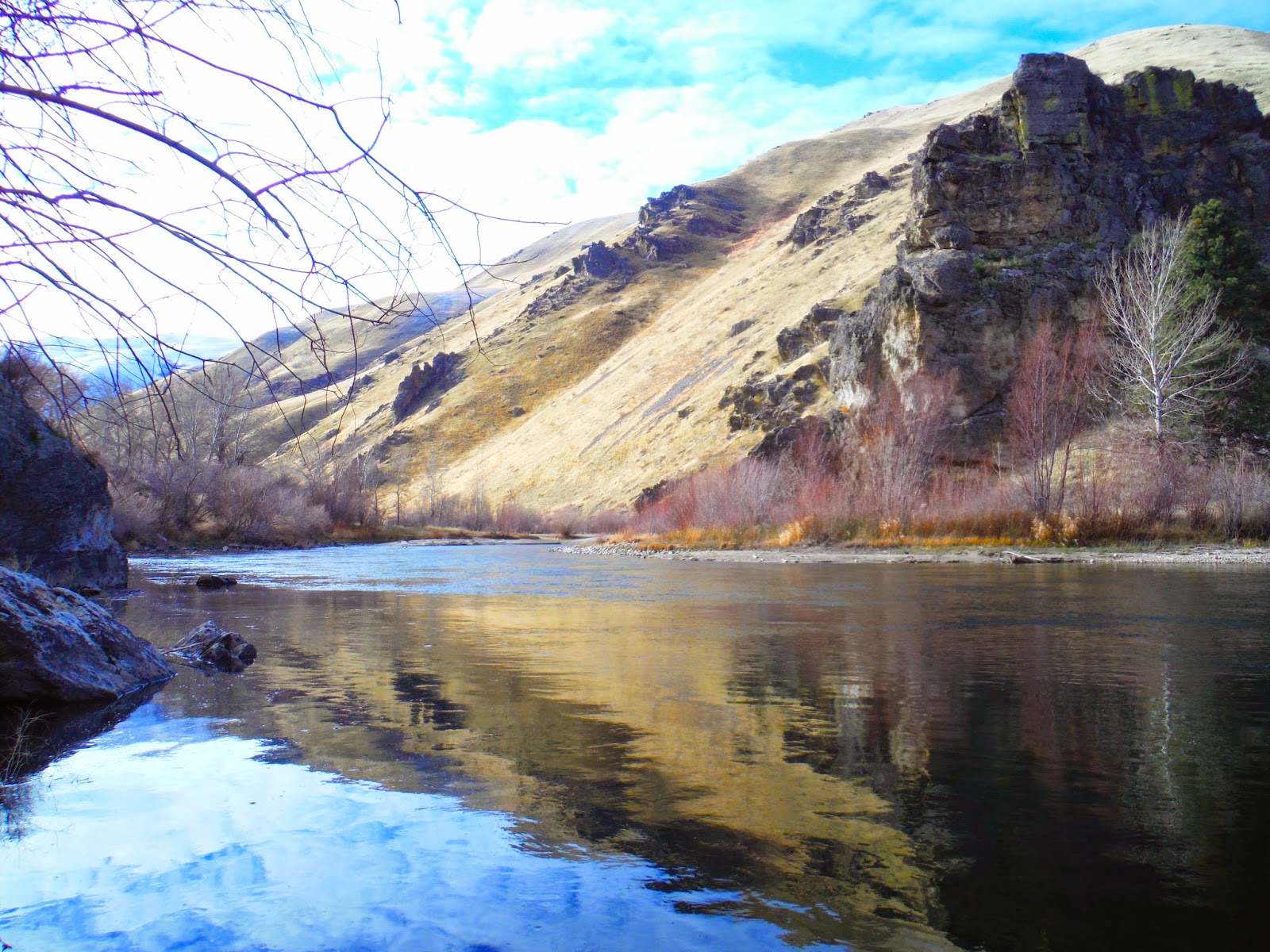 “Okay, keep an eye on your indicator, and if it goes down set the hook.” I said, after Shawn delivered a nice cast over a promising seam.  Sure enough his indicator shot under, and Shawn set the hook!
“I got one!” Shawn said, with a smile.  The rod tip danced with a fish, as Shawn started to strip in his line.
“Yeah, you got it!” I encouraged him along.  I unhooked my net to scoop up Shawn’s fish, and though it wasn’t a monster, it was Shawn’s first fish on a fly rod! 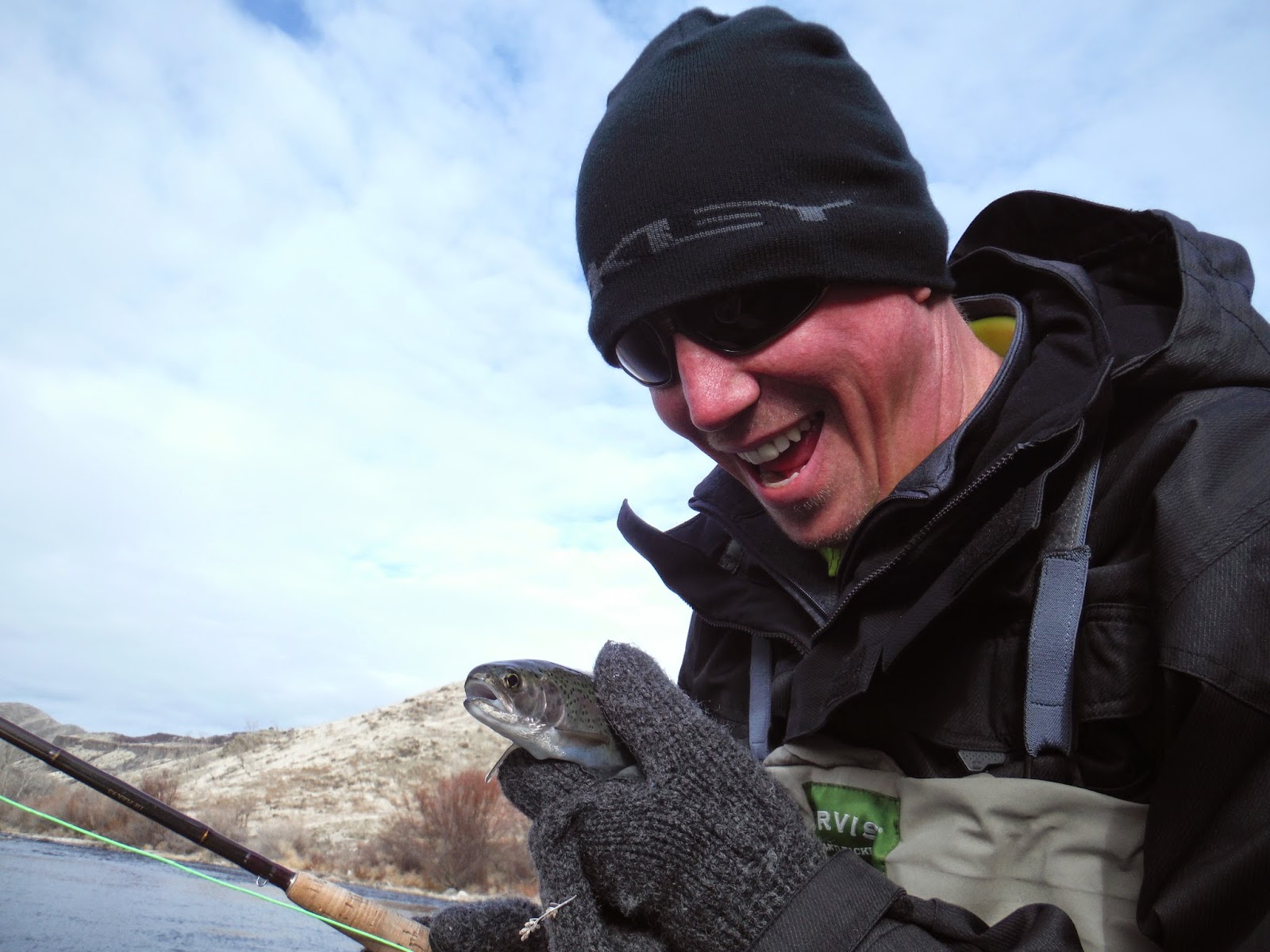 He dipped the little head of the fish back into the water, and watched as it slipped from his fingers. A smile that could be seen from the moon spread across his face.  After a few more casts, it was time to move on. 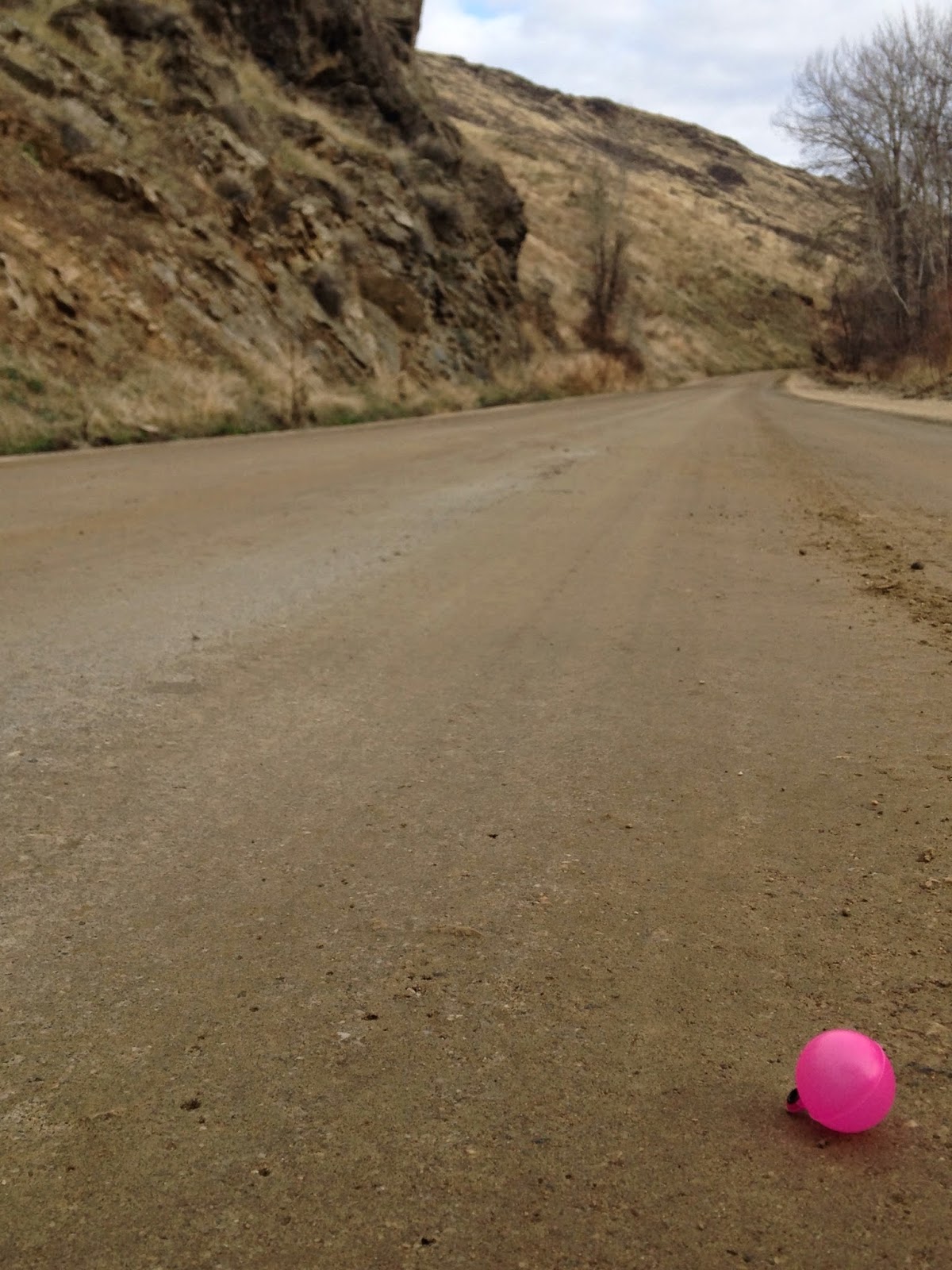 “See that rock over there?” I asked, pointing.
“Yeah.” Shawn replied.
“There will mostly likely be fish around that rock.  I want you to aim your fly at that rock, okay?” I said.
“Got it!” Shawn said.
Shawn had been having trouble getting his indicator where it needed to be, but this time he nailed the target… a little too well. 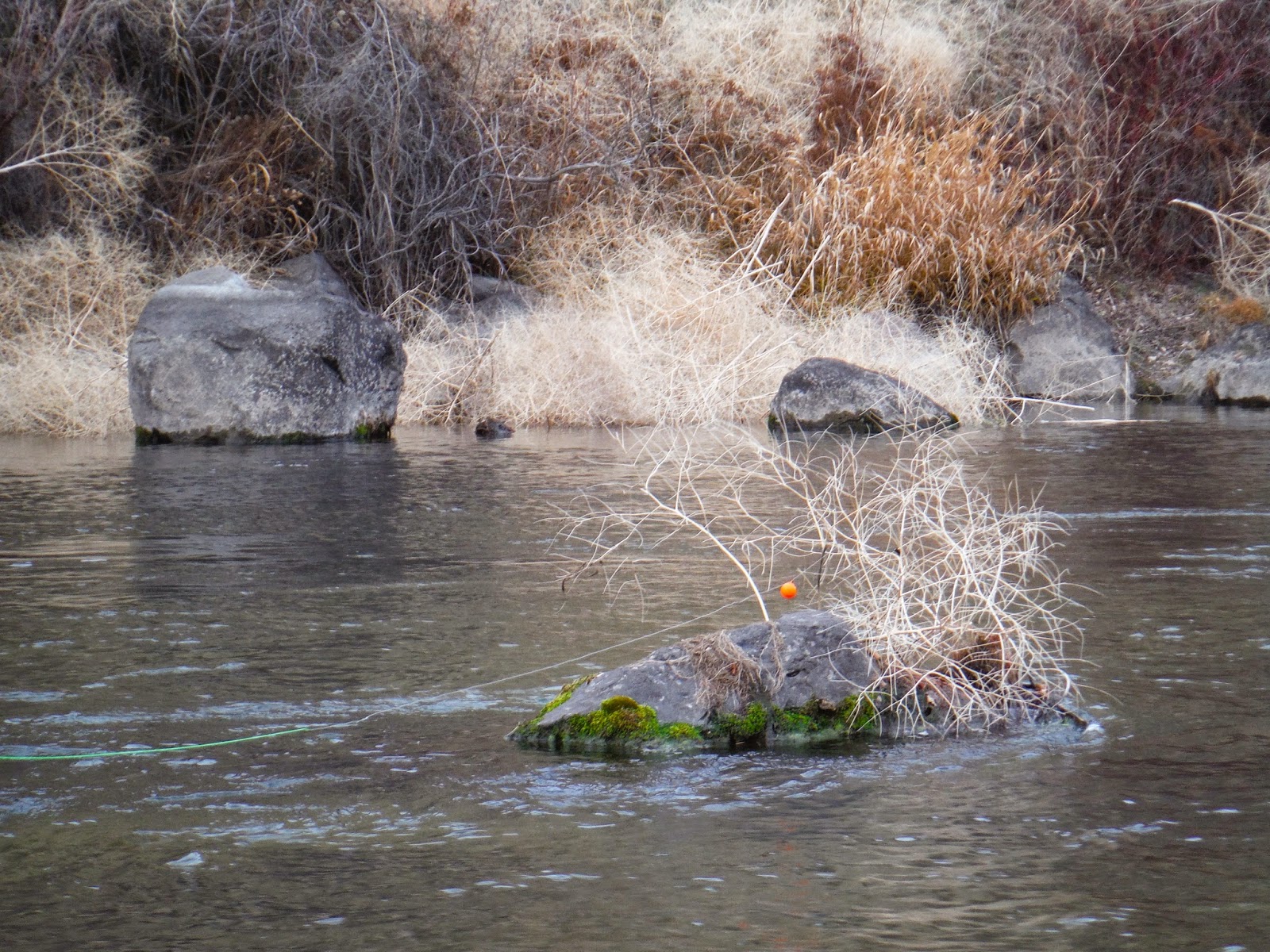 “Out of all the times I asked you to cast to a specific spot, this is the one time you actually hit the target?” I asked, sarcastically as he tugged on his line to free the snag.
“Can I watch you nymph this spot?” Shawn asked, “it helps me to learn when I see a master like you at work.”
“Flattery will get you nowhere in fly fishing…  Just kidding.” I said, and took his fly rod.
I presented my nymphs just above the rock, while adding a quick flick to mend the line before it hit the water.  I did my best to explain how and why I worked the fly line the way I did, so that Shawn could understand.  As I was watching my indicator, I saw a large flash directly under it, and I set the hook!  My fly rod doubled over with a fish, and I looked back at Shawn with a smile.
“What? Your indicator didn’t go down. How did you know you had a fish?” He asked.
“I saw the flash of the fish feeding under water.  Sometimes they take in your fly and spit it out so fast that your indicator doesn’t have time to go down.” I explained while fighting my fish.
“So, I probably wouldn’t have caught that fish?” Shawn asked.
“Probably not.” I admitted, “but you can help me land this fish; it’s a big sucker fish.” I said, handing the rod to Shawn while I grabbed my net and scooped up the fish. 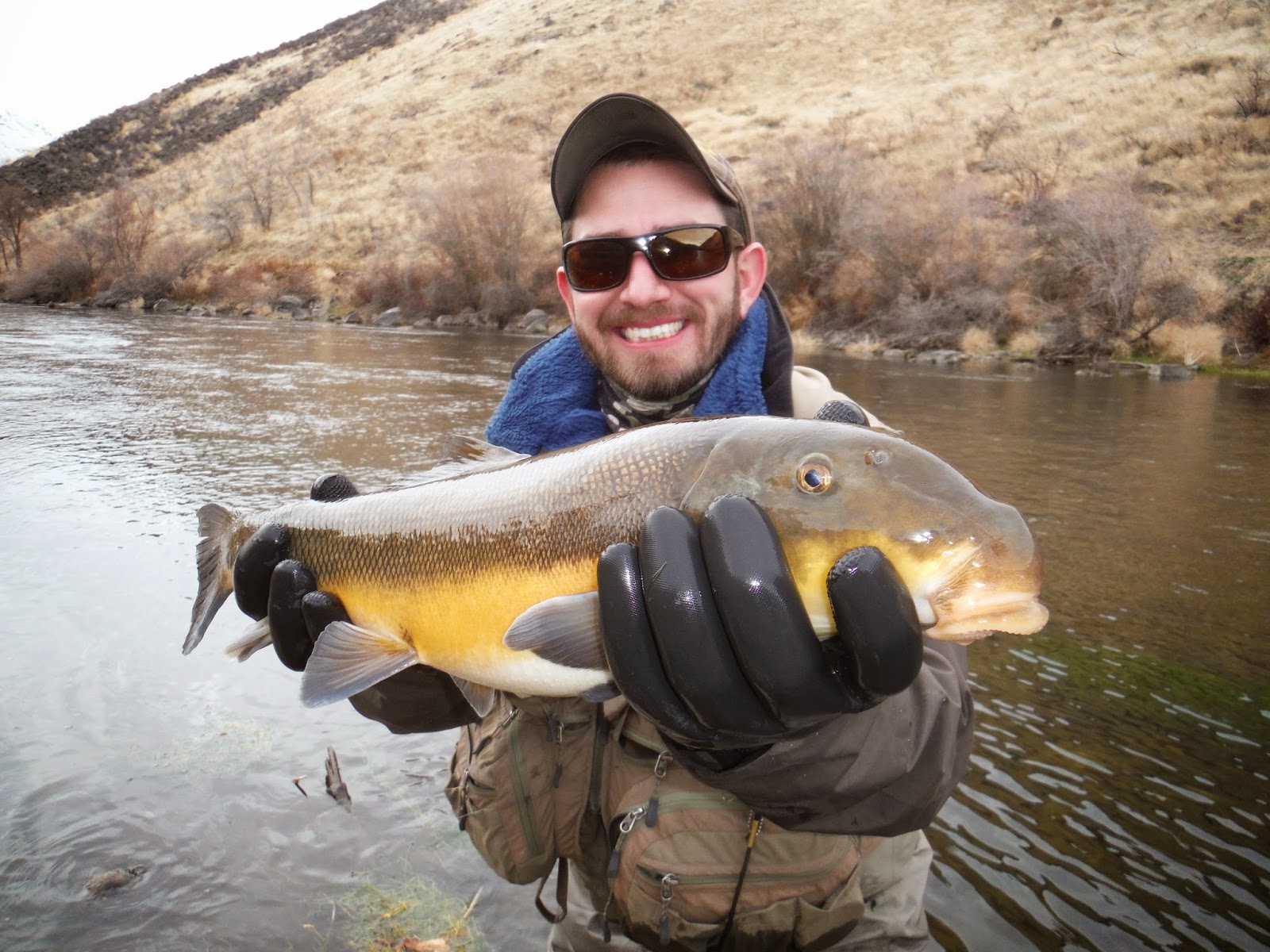 “That is one ugly fish!” Shawn said, laughing.
“Oh, come on, Shawn, I want to be your friend!” I said in a dopy voice, pointing the fish at Shawn. 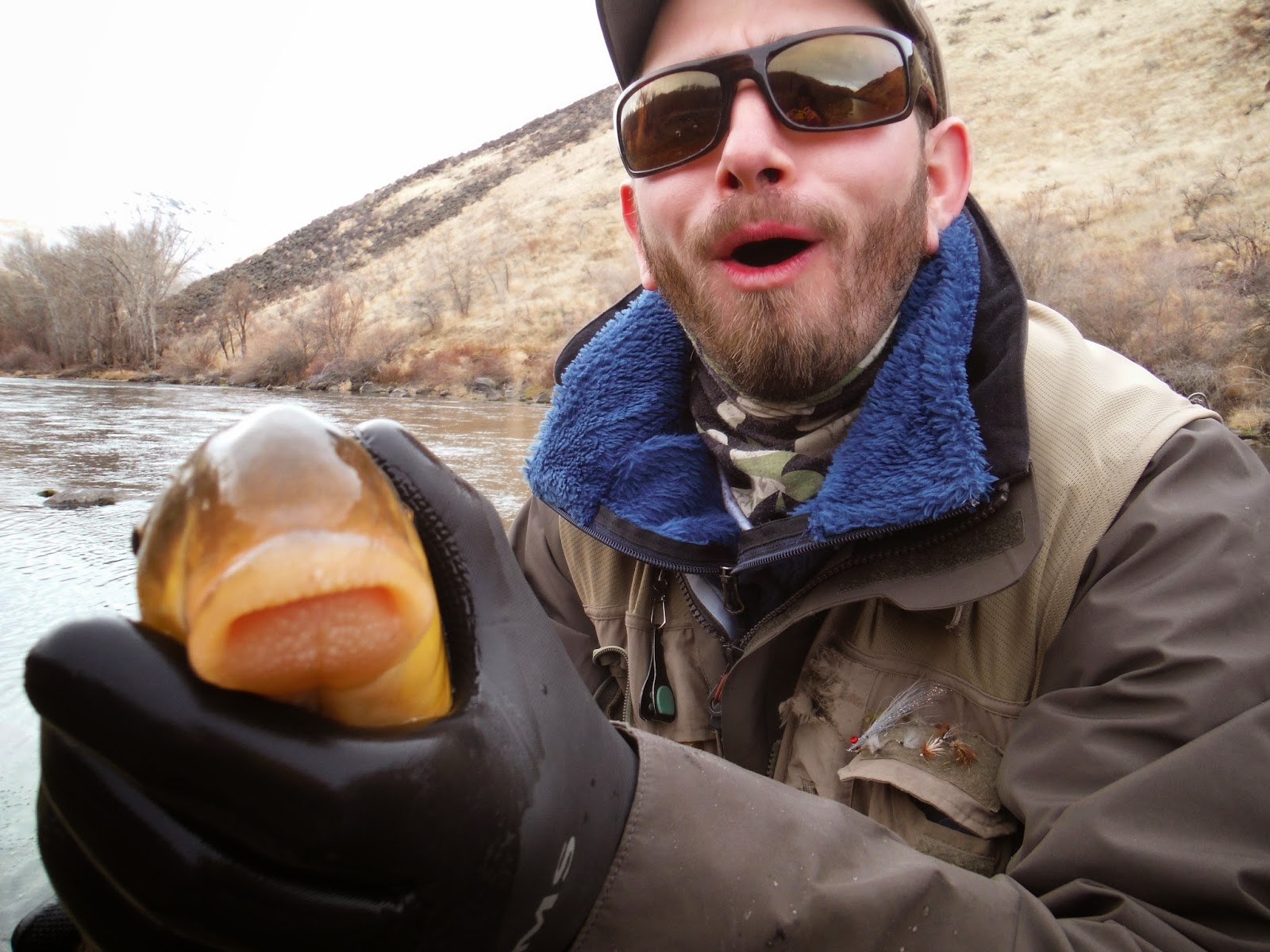 “Dude, get that thing away from me!” Shawn said, but I did just the opposite. In a sudden lunge, I brought the fish right up to his face.  Shawn’s face scrunched up while flailing his hands like he was shoeing away a swarm of mosquitoes. The whole thing was so theatrical that I couldn’t stop laughing, even after I let the fish go. 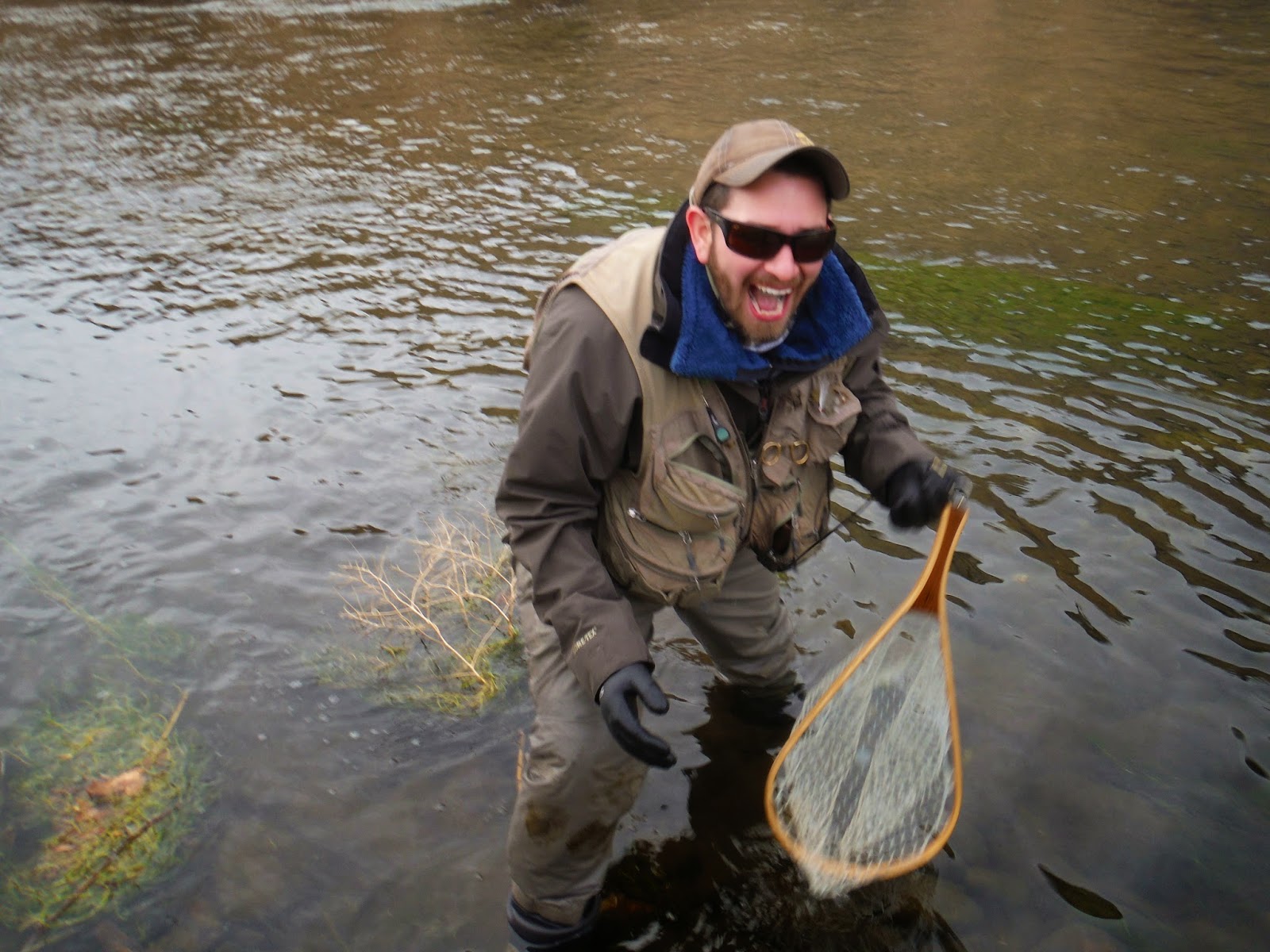 “I hate you.” Shawn said, before we got off the water and geared down to head home. 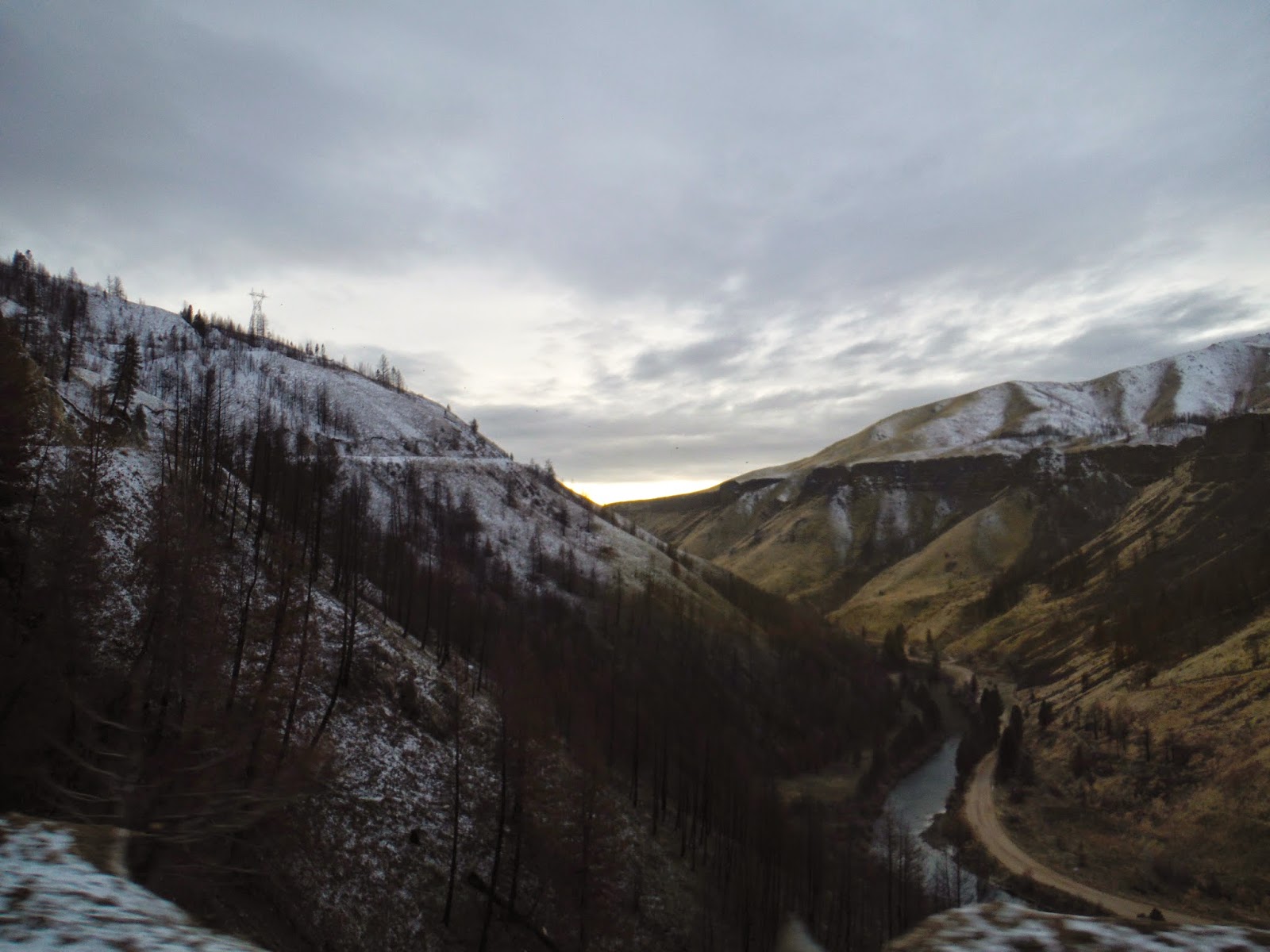 Shawn’s SUV started, which was a nice sound considering it didn’t start last time, stranding us out there for a few extra hours. We geared down and started to drive out of the canyon.
“Well, good job on your fish today. Here’s to many more!” I said.
“Heck yeah, Dawg!” Shawn said, and we ended the day on a fist-bump.

3 thoughts on “The Newb”