Skip to content
A funeral for my Tia MaryLou brought me back to Moses Lake for a few days.  I remain very close to her family, and it was important for me to do my best to make it up to her funeral.  The funeral was Tuesday, and Monday was the viewing… So that meant if I took off Saturday after work to arrive late in Moses Lake, I could dedicate Sunday entirely to fly fishing: it’s what Tia MaryLou would have wanted… 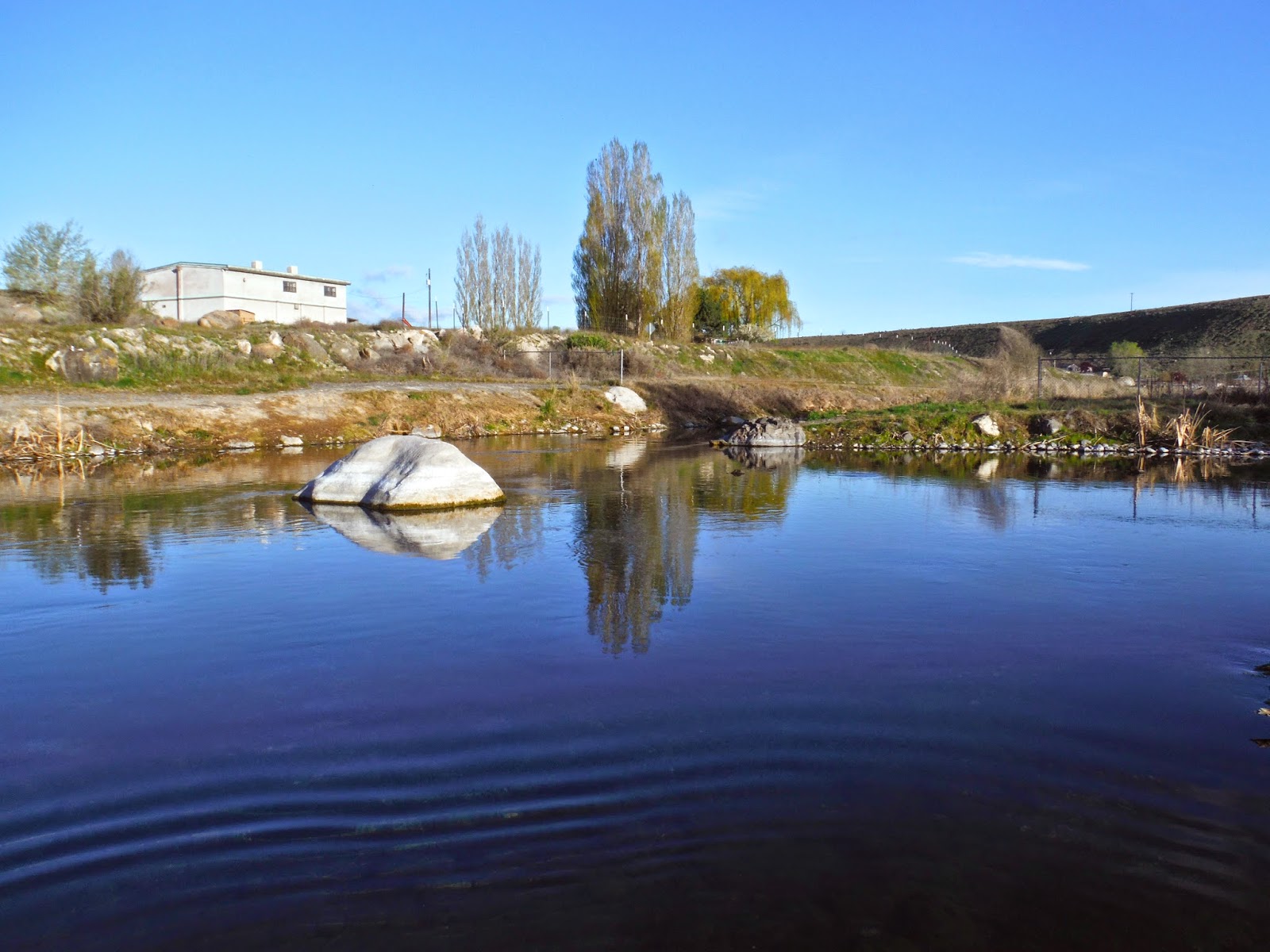 I arrived at Rocky Ford Creek early Sunday morning, and geared up in record time. With only a few hours to fish, I ran to the creek, geared up for heavy streamer fishing, then stopped in my tracks when I saw rising fish everywhere.  I looked at my 0X leader and realized it would be faster if I just went back to the car and rerigged to a 9 foot 6X leader for dry fly fishing.  I quickly tied on a suspended midge and hooked into the smallest fish I have ever caught at Rocky Ford. 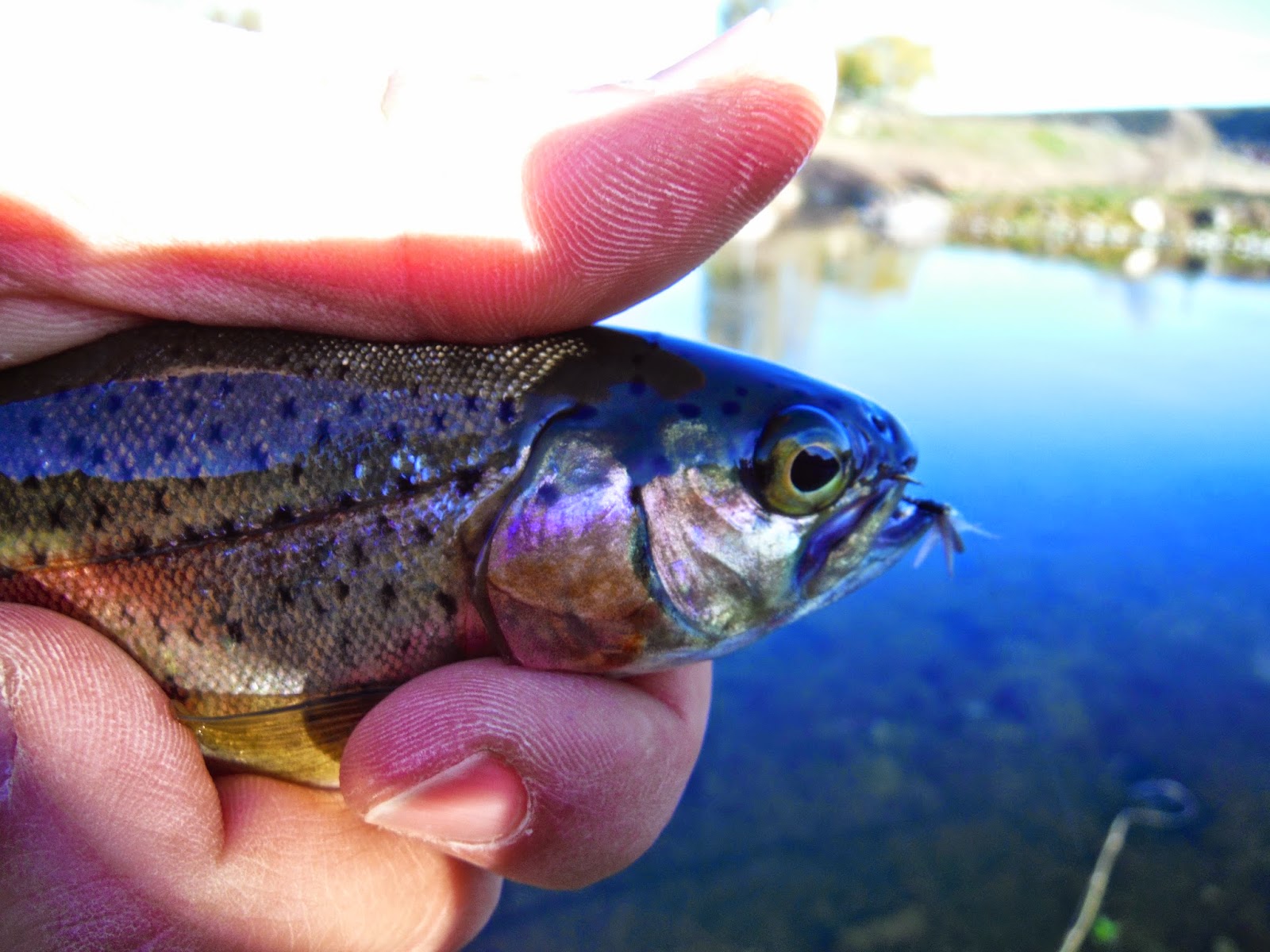 Rising fish were everywhere, but this time I selected a larger fish to cast to.  My fly hit the water like a feather, and I watched as it floated right over the fish.  A large disturbance around my fly told me that the large fish looked, then refused it.  “Oh, come on fish”, I whispered to myself, as my fly drifted past another fish. Another obvious refusal got me fired up, and after a third, I ripped my fly away from the water.  The only thing I could think of was that the first little fish I caught told the other fish not to eat my fly… I re-dressed my suspended midge and casted it back out there.  This time as soon as it hit the water, a fish nailed it.
“There we go!” I said, and brought in a nice fish.  I unhooked it and brought my camera down for a picture, but the fish bucked my hand off its tail leaving me with a splashy release shot. 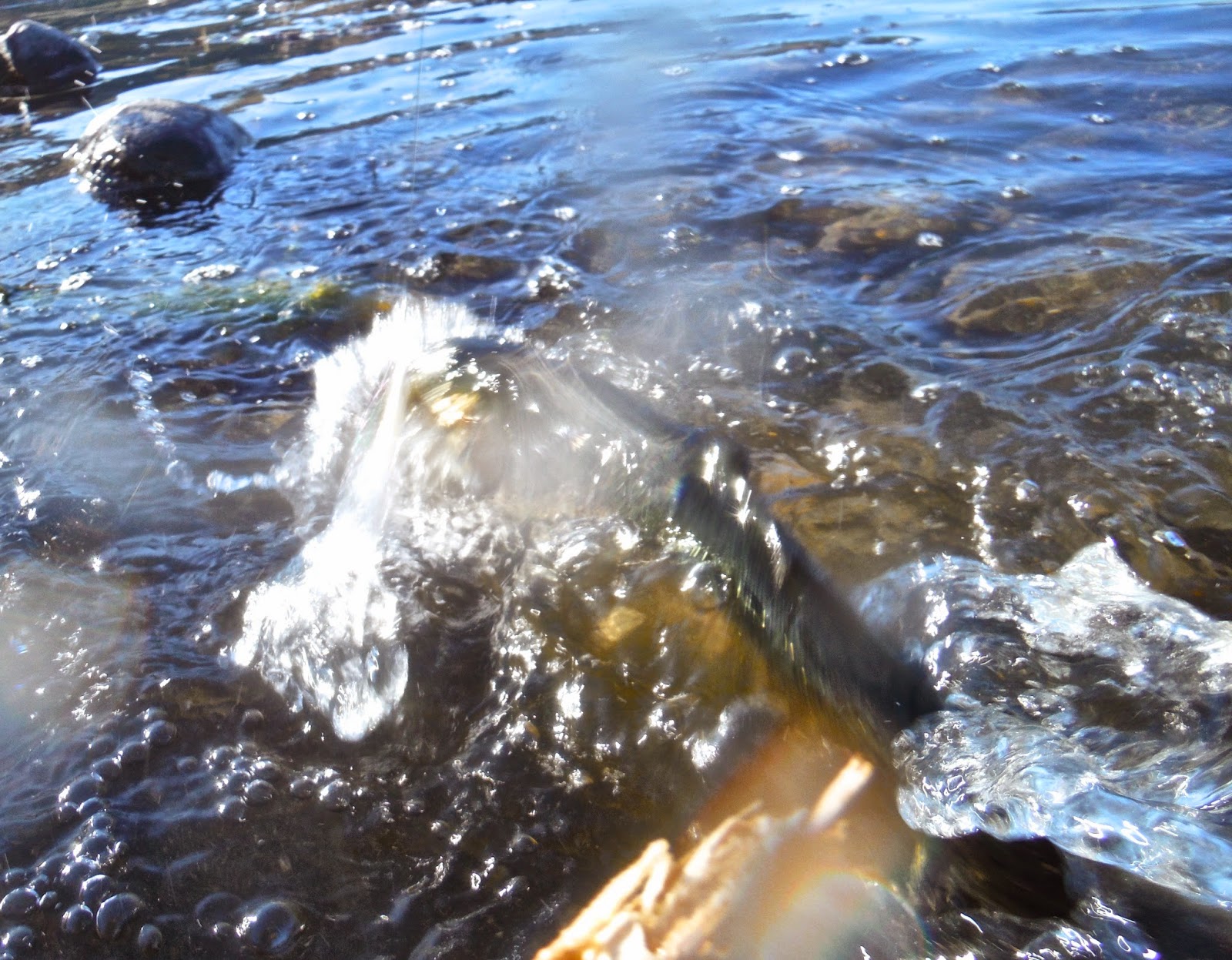 An hour had passed, leaving me with two fish to the net and a few more lost while bringing them in. I really wanted to get some streamer fishing in, and with the fish not rising anymore I changed my outfit for streamer fishing. 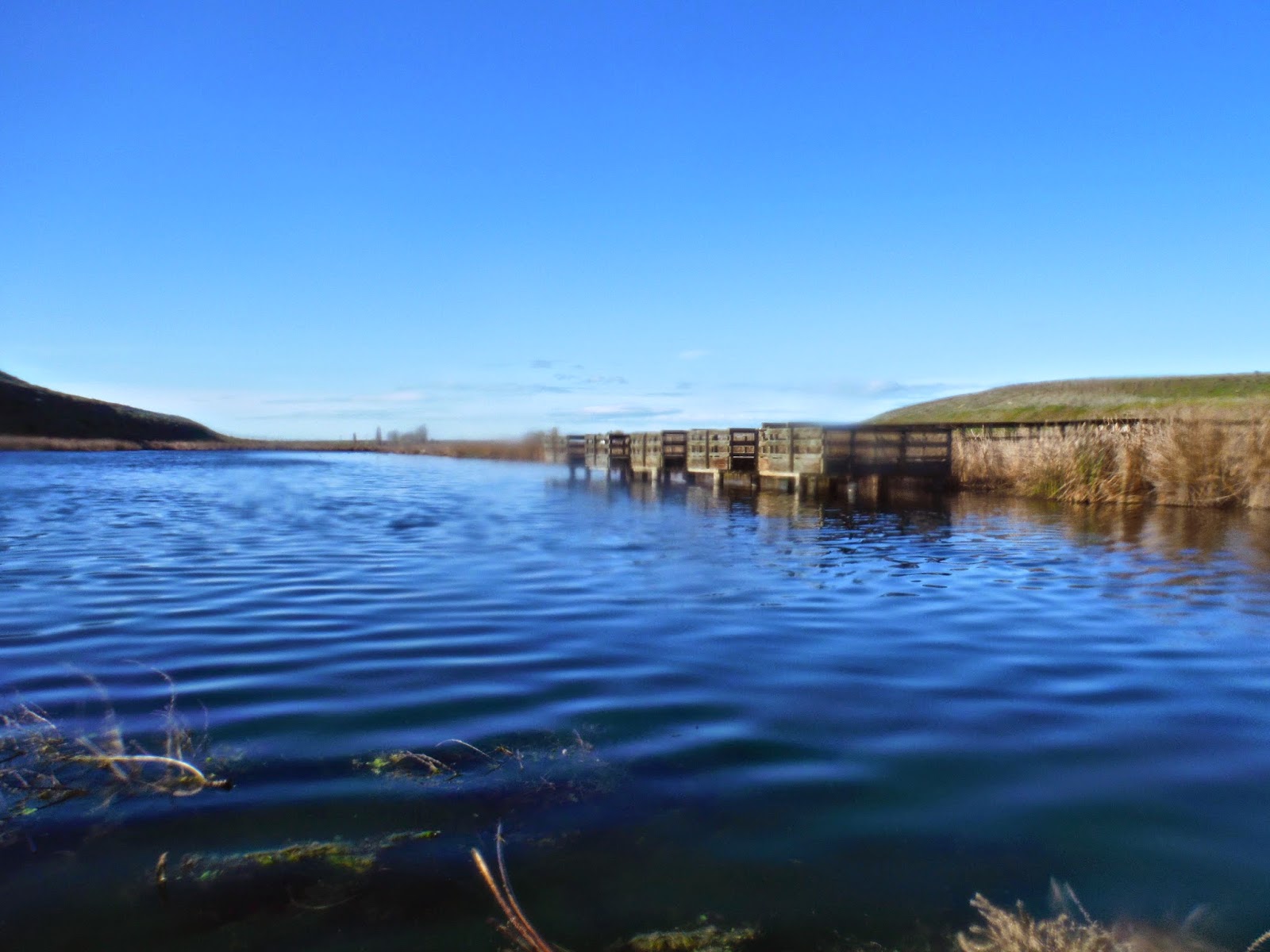 I launched my streamer out as far as I could manage, and it was hit immediately. The sudden jolt of the fish tore line away from my hands and was peeling line from my reel as it made a run for it. I got its head turned, but the fish didn’t give up that easy. The fish went for another run, shedding line from my reel again before it tuckered out and came in. 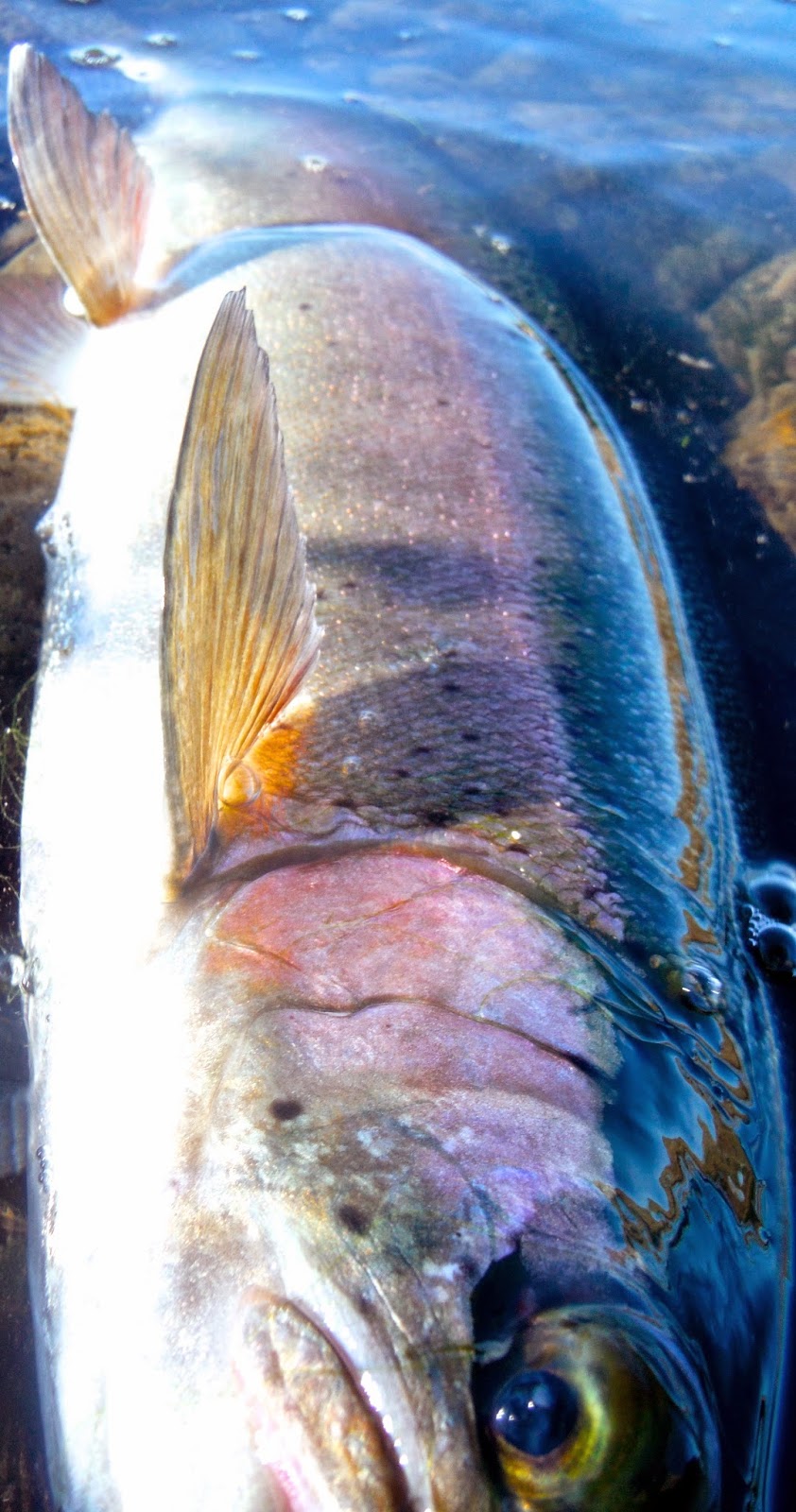 The fish kicked away quickly, and I was up and casting again without hesitation. A flash of chrome and a bump let me know the fish were still interested in my dalai lama.  I casted in every direction, searching for the fish that had just swiped at my fly, but I couldn’t find it. I took a few steps downstream and got into position to launch my fly out again.  I stripped in my fly, and saw the unmistakable wake of a large fish charging at my fly. This tends to be to the typical approach from fish at Rocky Ford Creek, and it never gets old.  The fish slammed my fly like it was mad at the world, and put up a nice fight before I netted yet another nice fish. 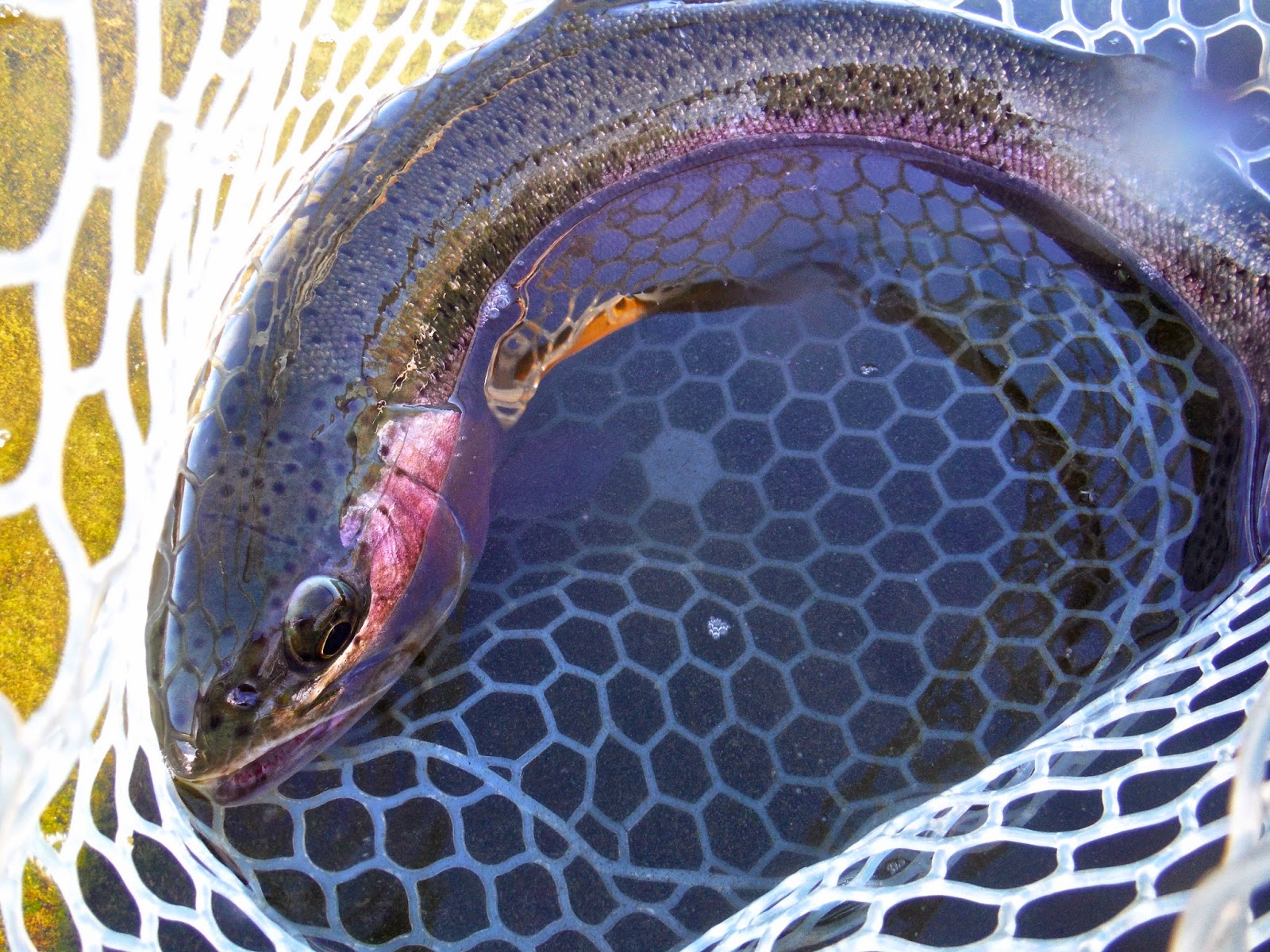 I went back to working the water with a streamer after letting my fish go, but found none.  I decided to make my way downstream to try out different spots on the creek. 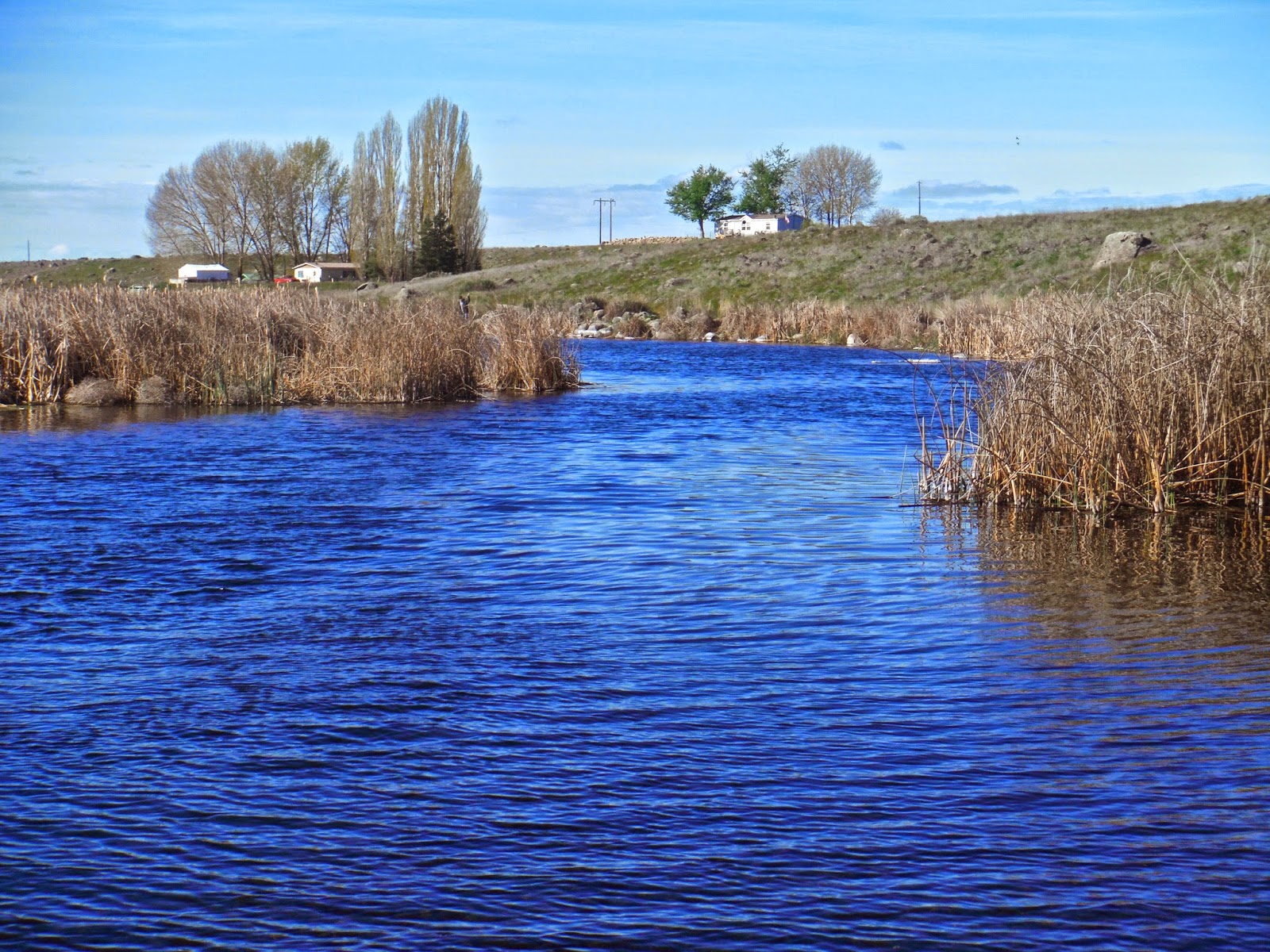 The wind had picked up significantly, as I casted over my left shoulder to avoid a gust blowing my fly into the back of my head. I searched and searched the different openings to the creek with no luck.  An hour of searching brought me nothing, so I headed back to where I had hooked into my last fish. 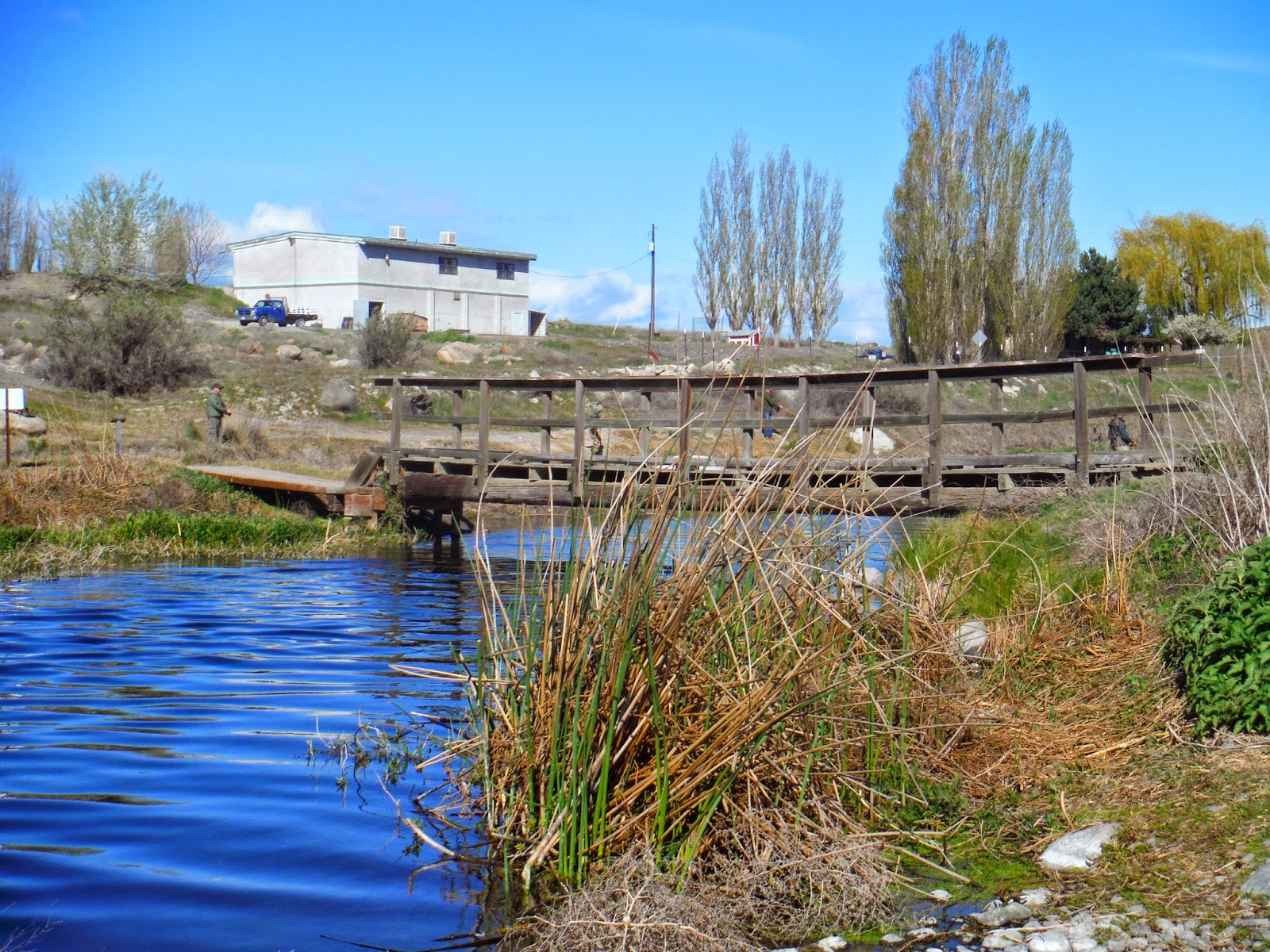 I had twenty minutes left to fish before I needed to head back, and all I wanted was one more fish. Nothing had taken my streamer for quite some time, so I resorted to the old Rocky Ford standby: sight nymphing. Standing on top of the small walking bridge, I saw a nice fish that would definitely make a great last catch. 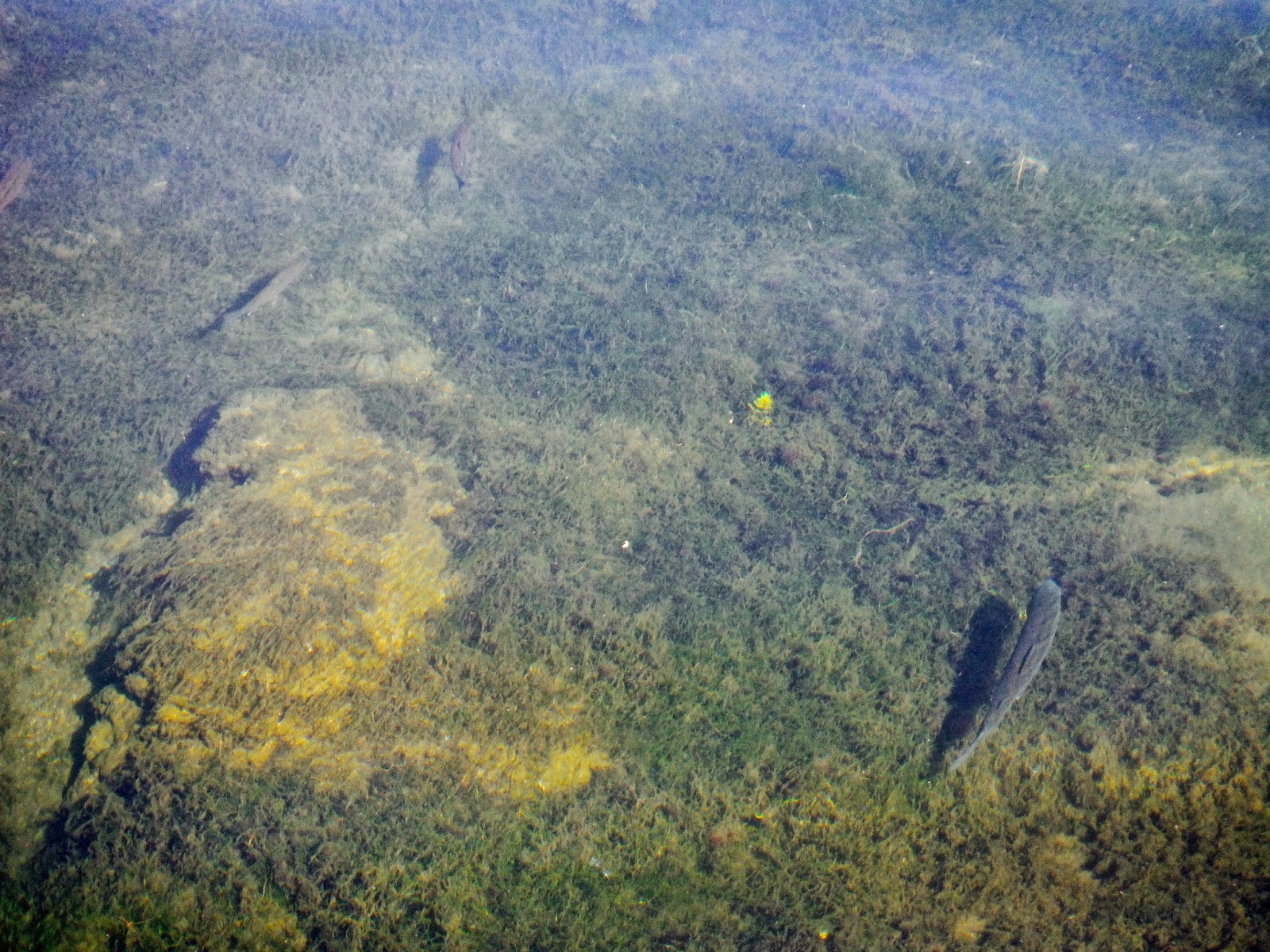 I tapered my leader down to 5X tipped and tied on a size 20 crystal baetis nymph. The water is so clear, that even a size 20 nymph can be seen as it sinks to the depth of the fish. I watched as the fish caught sight of my nymph, turned towards it, and ate it! 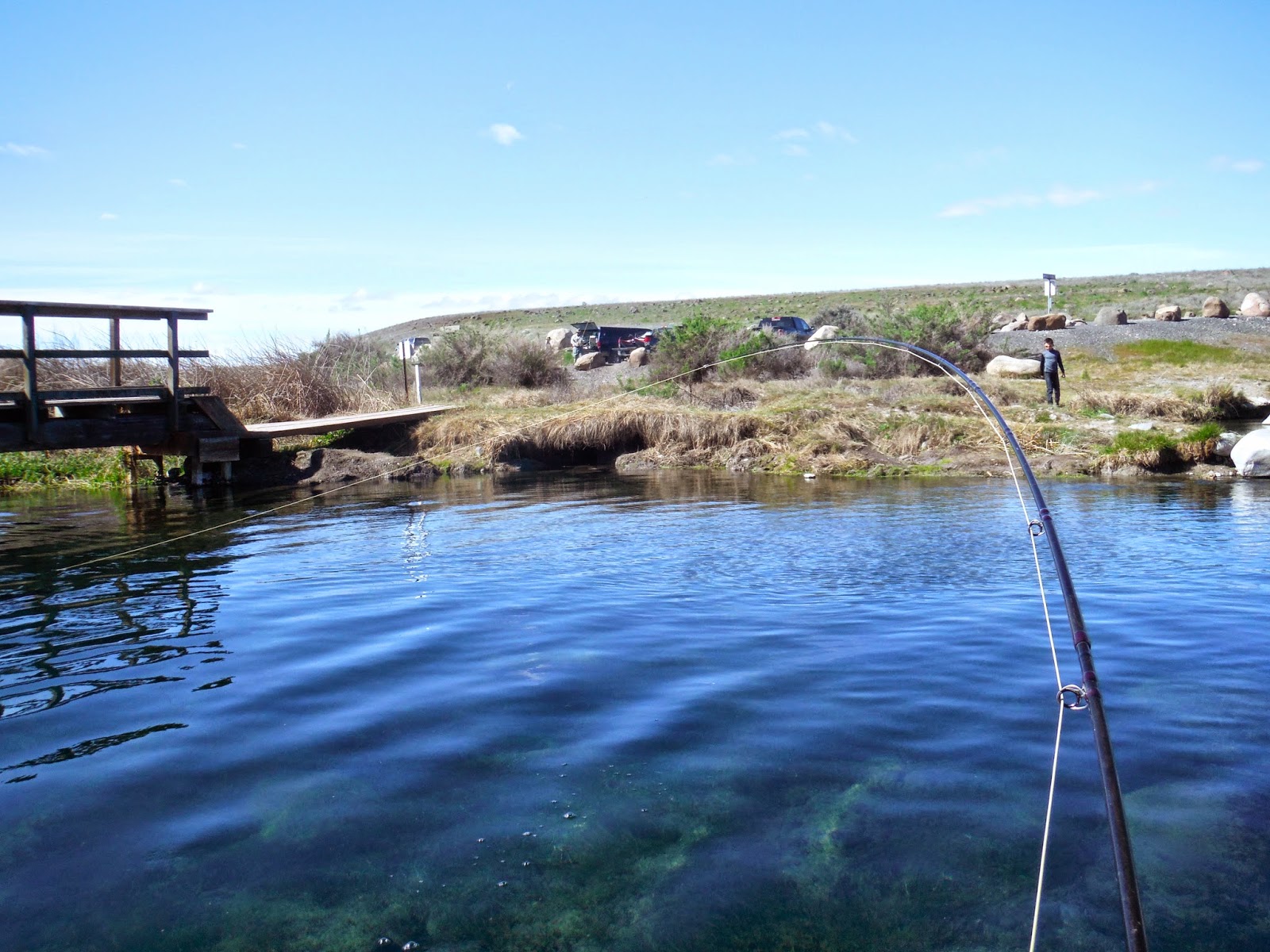 The bigger fish at Rocky Ford like to come to the surface and roll over and over, trying to spit your hook. This fish was no different; the thrashing of the fish meant I could lose it, but its attempt to free itself failed. I applied pressure, but the fish would have none of it. Again it came up to thrash and roll, and again the thought of losing the fish pierced my mind. That last attempt to get away tired the fish for just a second, and that was all the time I needed to hoist the fish into my net. 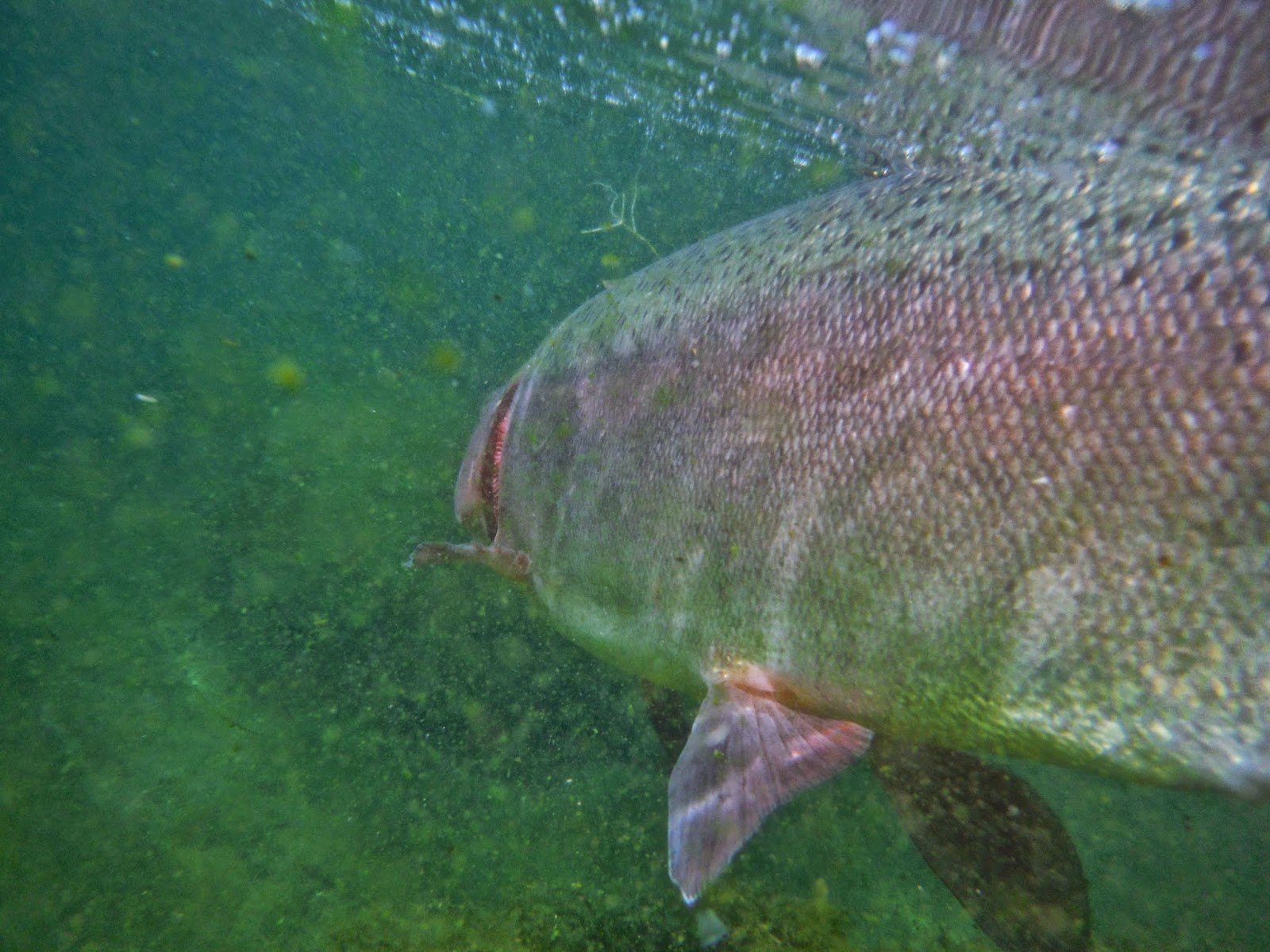 I personally enjoy being able to say I caught a fish on my last cast on any river, especially a place I only get to fish once or twice a year. My fish shook away hard, forcing me to release it. I was happy with my last fish, and was now ready to go home, ten minutes early no less.  It’s true, I do have all day to fish today, but it will not all be at Rocky Ford Creek.  I had to get going because by buddy, Tyler Steffens, was able to clear a day to take Gracy and I out for a few hours to float the Yakima River.
“There were a few fish taking salmon flies, Erik! It will be like throwing baby birds!” Tyler told me the previous night, with enthusiasm.  That bit of information made it easy to leave Rocky Ford Creek and make the drive up to Ellensburg to fish the Yakima River.

1 thought on “A Few Hours at Rocky Ford”