Skip to content
Crane Falls was our destination to do some popper fishing for bass. On such a warm day, the poppers should be working great.  My buddy, Andrew, and I pumped up our float tubes quickly to hit the water. 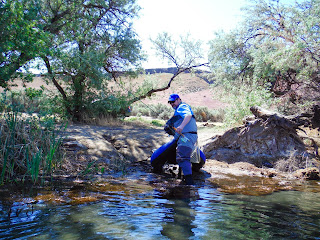 The two of us kicked around for a while with no bass willing to take our poppers.  It was a bit discouraging, as I really wanted Andrew to get the full popper experience. Reluctantly, I snipped off my popper and switched out my floating line with a fast sinking line and hooked into a bass in no time.  The little bass was fired up as I brought it in.  I took out my camera to get a quick shot, but it made one last effort to free itself and jumped right as I snapped the picture.  The effort paid off, because in mid-jump the fly flew out of its mouth before I could bring it all the way in. 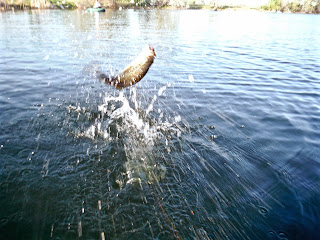 I casted back out, and hooked up right away.  This time I brought the bass all the way in, and nabbed a picture of it underwater. 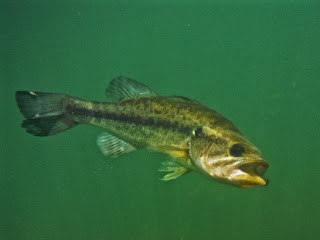 I started kicking my way over to Andrew, who was still fishing with a popper. I was a bit disappointed that the popper fishing was not on, but I wanted Andrew to catch a fish regardless. I knew he didn’t have a sinking line on him, so I started to kick my way his direction. On my way I hooked into a few more bass, a rainbow trout, and a nice bluegill that I was able to get an underwater shot of. 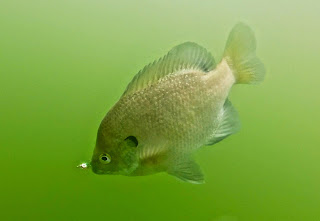 “This is a perfect day, Andrew.  The popper fishing should be on.” I said, confused that it wasn’t happening for us.
“Well I see you are catching fish…” Andrew said, then I showed him that I had switched my line out and handed him my rod to try.
“Cast out and count to 15, or something, then start retreating.” I said, as I kicked away.  I now had Andrew’s 7wt. fly rod, and was excited to bomb some casts out. 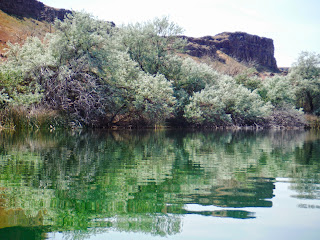 I took Andrew’s 7 wt and pealed off some line to make a long cast. With all kinds of confidence, I ripped the line off the water for a powerful back cast.  The line shot far behind me, then I punched it forward.  A large heap of line fell all over me like I had the worst timing in the world, and the popper just missed my head as it slowly whizzed by.
“Andrew!” I yelled over to him, “What kind of line do you have on this rod?”
“I don’t know.” Andrew replied.
“Is it a 7wt. line?” I asked.
“It’s the line I use for my 5 wt.” Andrew said.
“Didn’t you notice that it’s hard to cast?” I asked.
“Well yeah, but I thought it was just because I sucked.” He said.
“Well don’t let me take that away from you, but your line is all wrong.” I said, and explained the importance of pairing the correct line with your fly rod.  Andrew’s attention was quickly diverted when he had hooked into his first bass of the day. 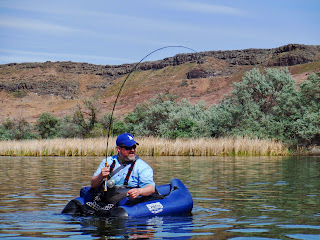 Andrew brought in his bass quickly, and after getting a hold of the squirmy fish, I kicked over to snap a picture.
“Hold it out now so that it looks bigger than what it actually is.” I advised, and he did before I took a shot. 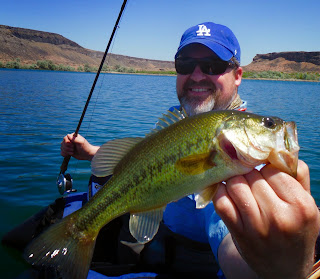 Andrew was all kinds of happy, but knew his rod was not geared up to par.  He asked for it back, but I let him use my rod for a bit longer.  Instead of trying to cast the 7 wt, I rigged it up for chironomid fishing.  This way, casting didn’t matter; I could just lob the line out with an indicator to let me know if I had on a fish.  It wasn’t long before I saw the indicator shoot under, and I set the hook.  Missed it, I thought, as I brought my line in to recast. But wait…there was something attached.  The smallest bluegill was putting up the fight of its life, and despite its effort, I couldn’t feel a thing on the 7wt.
“You are worth a picture.” I said to the fish, and held it up for the camera. 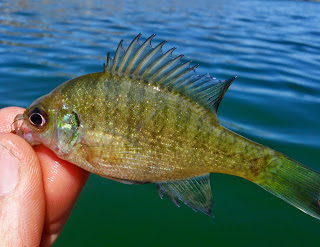 Out of the corner of my eye I saw some disturbances on the water right near the shore. The day had significantly warmed up, and the thought of popper fishing crossed my mind. I kicked my way closer to the tall weeds near the shore, watching the fish splashing around. I tied on a popper, and sent it splashing down as close as I dared near the weeds. 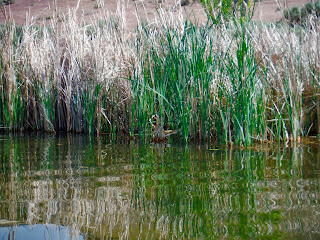 I made one pop, and a wake darted towards my popper. BLAM! A bass took with such speed, that if it was any faster the government would need to get involved. It flew out of the water again and again which brought a smile to my face. Now this is popper fishing! 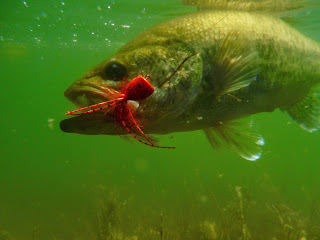 I called Andrew over and handed him his rod back.
“Get that popper super close to the weeds. That’s where the bass are.” I said, and Andrew didn’t waste any time. His popper hit the tall weeds…and got stuck. He was off to a slow start, but quickly pulled it free, and played it back down. Boom, his popper was hit. Andrew’s bass jumped at every opportunity, and he was loving every minute of it. With his bass lipped, he held it up for a picture before going back to fishing. 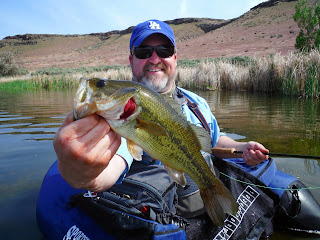 We stayed close to the bank, hammering fish after fish on poppers.
“This is awesome!” Andrew said happily.
“I’m just happy it turned on for us.” I said back.
Andrew found a nice cove that was filled with large bluegill.  The bluegill would attack his popper, then come unbuttoned almost immediately. Finally one stuck, and the bluegill fought just as hard as the bass. Andrew brought in his stubby bluegill, which had some size to it. 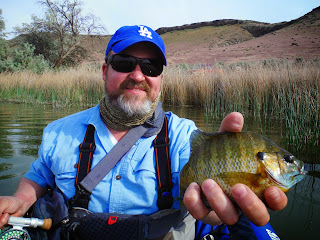 I also wanted a bluegill, so I shot my line into Andrew’s spot and hooked up immediately.  The bluegill fought like a pro, and when I brought it in, I could see it was in full spawning colors. 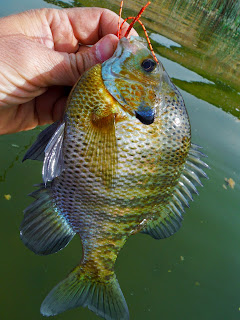 The day was flying by, and things had started to slow down. We started to head back to the car when I felt the need for one more fish.
“We each have to get one more fish, Andrew.” I said to him, before we headed back.  Catching one last fish can be a dangerous game; it often leave you out on the water much later than expected, and empty-handed.
Andrew and I went back to his bluegill cove and worked it hard with our poppers.  My popper got hit, and I ripped in my last fish of the day. 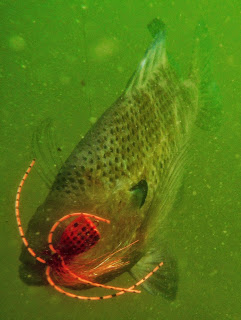 Andrew stayed stealthy as he inched closer to the weeds.  He plopped his popper right where it needed to be, and WHAM! 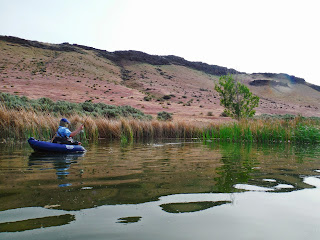 Each of us caught a fish on our last casts. Before I could think of another reason to stick around, I clipped off my popper and reeled in my line.
“This was a good day!” I said to Andrew as we made it back to the car.
“Yeah, thanks for bringing me out.” He said, “even though I didn’t catch as many fish as you did, it was still fun.”
“Don’t worry about it. The only reason you didn’t catch as many fish as I was because I gave you a defective popper.” I said with a smile.
“What?” Andrew asked, looking at his popper.
“I’m kidding, but at least you don’t have bass thumb.” I said, showing him my thumbs. The little teeth on a bass are like rough sand paper, and when you lip enough of them them it can leave your thumb a little tore up.
“Be careful, bass thumb is very contagious and, before you know it, you will be back trying to catch it.” I said as we packed up the float tubes.
“I can’t wait to get back out there.” Andrew said, as we pulled away.
“Careful, Andrew, that’s the bass thumb talking.” I said, and we took off, knowing this was only the beginning of popper season.

5 thoughts on “A Small Case of Bass Thumb”