Skip to content
Yes it’s true, I do a lot of fishing. And my wife, Gracy, is very generous when it comes to giving me time on the water. So every once in a while, on top of my regular house chores, I do something nice for her that has nothing to do with fly fishing.  Well, almost nothing. Tom Rosenbauer  got me started on this whole chocolate kick, and ever since I have become a chocolate snob.

The Chocolate Bar in Boise offers an evening of fun, making chocolate treats to take home, and if you have a group of 6-12 people they will host a private class. I invited the Grajcars and the Kazkoffs to a fun night of chocolate making, allowing us to have our own private party. Chris and Christy Preston own the Chocolate Bar and were the ones teaching the class. To kick off the night, Chris offered red wine which was well accepted and quickly consumed. Oh, and did I mention that Chris and Christy are also avid fly anglers? 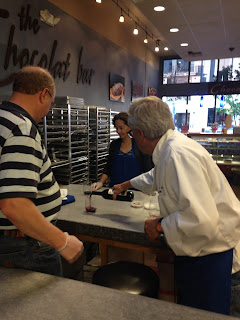 “One of the most important things about working with fresh chocolate,” Christy explained, “is to keep your work station dry, because fresh chocolate and water do not mix.” To prep for this Chris and Christy covered the granite table with wax paper. Everyone was excited to start making chocolate and Gracy was no exception; in a flurry of excitement she reached for some chocolate and failed to see my glass of water right in her hand’s way. She tipped the glass of water that flooded our workstations to the point where Christy had to redo the wax paper. Gracy helped to get things moving along. 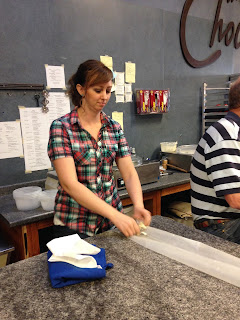 The dipping process took some technique that Christy taught us before we began.
“I can even show you how to make tuxedo strawberries!” Christy said happily, as we started to dip our strawberries. 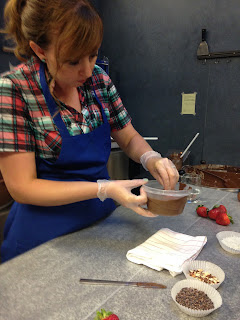 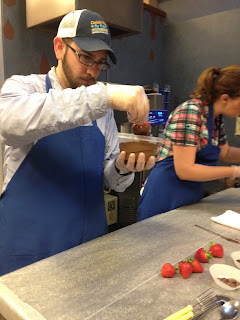 The tuxedo strawberries were fun to make. The bow tie was the hardest part, but I was able to capture it nicely. 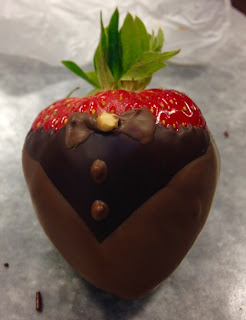 Drizzling was another technique that Chris and Christy taught us.
“Dip your knife deep in the chocolate, and hold it up hight while wiggling the knife over top of your strawberry.” Christy told us, as she handed over the knife. Gracy got this technique down quickly, covering up her strawberries nice and professional-like. 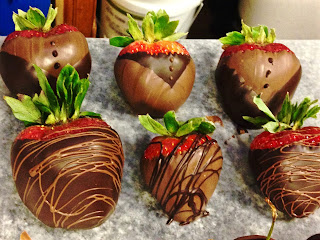 “My tuxedo strawberry looks more like a nice blazer…” Mark said, “Is that okay?”
“Well I don’t know what mine looks like…” Jim added, laughing at his creations. I walked over to see how Carolyn was doing on her chocolate creations, and noticed they were disappearing quickly after being created. 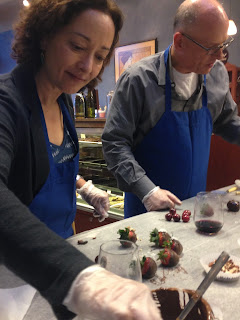 Both Mark and Elaine were watching as Chris explained how to dip a truffle into the chocolate and not lose it. However, Mark was working on something else more serious.
“Everyone, look at my incredible creation!” Mark said stepping away from the table and holding out his hands… “I call it my Jackson Pollock truffle!” 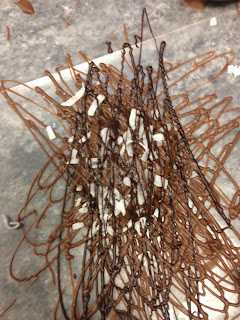 “I’m sensing you were a bit sloshed on red wine, and angry.” I said, looking at his truffle. “With these textures you added, I am definitely picking up an angry vibe when you were creating this piece.”
“Interesting how you were able to pick that up, Erik.” Mark said, sounding as snobby as possible, “Only a true artist could have seen that.” 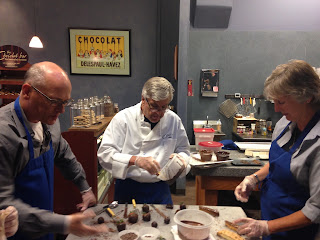 Next up was biscotti, and at the sound of the name Gracy snapped to attention. 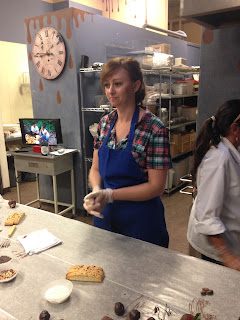 Christy quickly taught us how to dip them properly, as Chris went around making sure everyone had a full glass of wine. 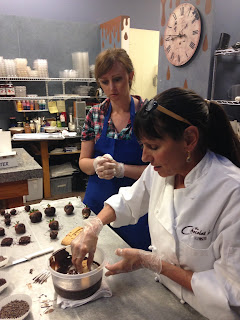 “Oh I probably shouldn’t have any more wine.” Mark said, as Chris came with the bottle. Chris started pouring Elaine more wine, and Mark couldn’t keep his eyes off the scarlet liquid splashing safely in her cup.
“Well, maybe just a sip more…” Mark said, looking at his wife, Carolyn, to make sure she approved. 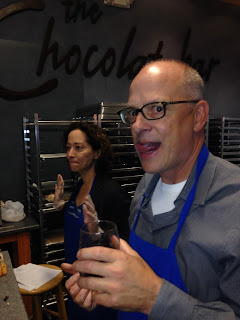 Mark’s wine didn’t last long, so he was back to his biscotti dipping. 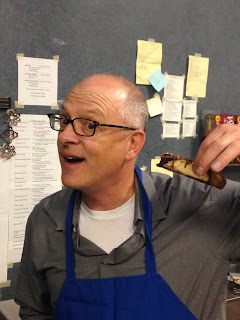 Jim and Gracy were both too focused on their chocolate treats; there was no time for chitchat. 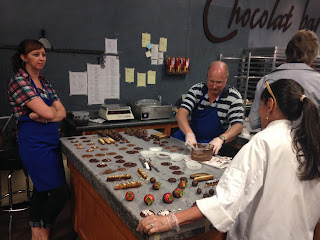 Near the end of the night we started to run out of room on our table. I did my best to fill every nook and cranny with a chocolate treat before Gracy stopped me from looking like a greedy chocolate mongrel. 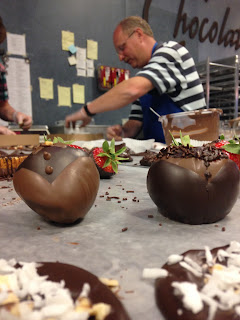 The time flew by, and it was already time to collect my chocolate treats. Chris mentioned that the class would last until 8:30 pm, and when I looked at the clock it was already passed 9 p.m. While everyone neatly organized their chocolates in their boxes, I had to, sloppily, stuff my chocolates on top of each other in order for them to fit.
“Maybe I did make a little to much.” I said.
“You think?” Gracy replied. 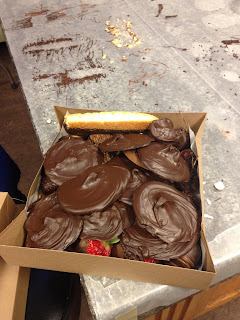 Everyone’s chocolate was boxed up and ready to go, but no one was ready to go. Instead we all chitchatted about fly fishing, chocolate, and food as the time flew by once again. 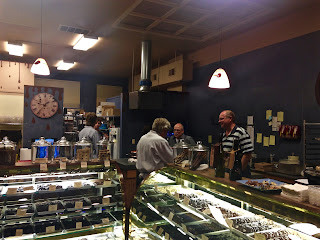 I was very happy to see that chocolate night was a major success. We all had a fantastic time. It was rounding 10 p.m., which was an hour and a half passed the ending time, and we had just started talking about fly fishing Yellowstone, which could easily soak up another hour. Sadly the night had to end, and everyone took off with, easily, a pound of chocolate in their hands. As we walked to our cars, the ladies were in such a good mood that they completely okayed a trip to West Yellowstone, with no rebuttal… Not about fly fishing indeed.

1 thought on “Chocolate Night, Not About Fly Fishing”