Skip to content
When my wife, Gracy, is interested in going popper fishing, I do whatever I can to keep her interest peaked.
“Would you like your own poppers?” I asked.
“Yes.” She said, happily.
“Would you like them large, medium, or small?”
“Small.” She said, after some consideration.
“What color?”
“Mmmmmm… Purple, with purple sparkles.”
“You got it!” I said, and with the next batch of flies I made her three purple sparkly poppers. 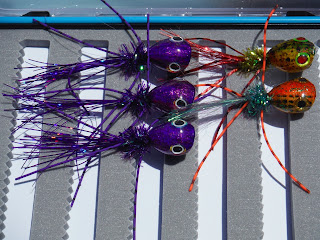 Another item on her list was the Orvis purple sling pack. Years back I had showed her the purple sling, and she was not interested in it. I brought her to the 2014 F3T event in Boise, which had a number of lady fly fishers with the purple Orvis sling.
“I want that pack!” She said in hushed excited tones, but Orvis had discontinued the pack that very year, preventing us from getting any more in the fly shop.  It was not until the 2015 Orvis Rendezvous when I spoke with a gentleman named Tyler Hallquest, who was running the pro shop at the event, about possibly getting one of the purple slings.  It was a shot in the dark, but Tyler came through and found the last purple sling Orvis had in their warehouse and he put my name on it.  The package arrived at the house before I got home from work, and it was no surprise that the Orvis box was already opened with the sling neatly organized for a day of fishing. 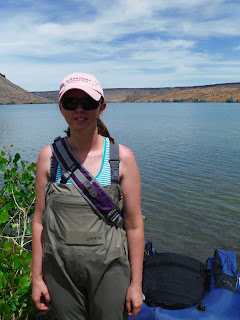 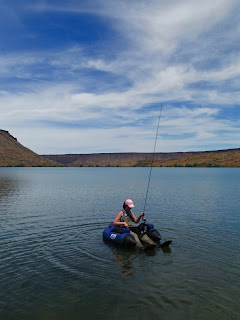 The water certainly made the day twenty degrees cooler, and on top of the nice cool water, it was clear. The visibility was at least 10 feet, which made it easy to spot cruising carp from down below. 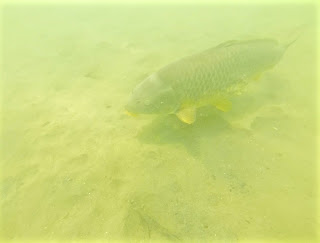 “How are you doing over there?” I called out to Gracy, who was fishing near some tall reeds.
“I’m getting bites, but I keep losing them.”
“Would you like to switch to a smaller popper?”
“No, I want to use my purple one.” She said, and continued to fish. 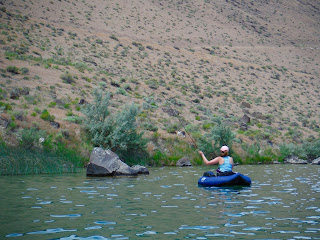 I soon found out what she was talking about. Little bluegill was all we could find on the edge of the water, and when I finally hooked into one I was not even sure how it got the little popper in its mouth. 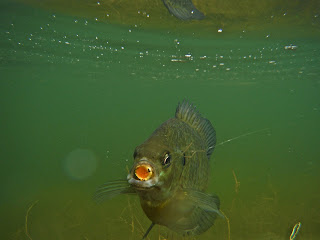 “I need a bass to take my popper!” Gracy scolded the pond after another lost bluegill.
“Get it way back on those rocks.” I suggested, but Gracy was way ahead of me.  Her popper landed near the edge of a rock, and she made a few pops.
“Whoa!” She yelled, when a bass slammed her popper with no warning. The bass put on quite the show before Gracy brought it in.
“Check out the eye on that one.” I said, kicking closer to take a picture. She held it up for me to get an eyeball shot. 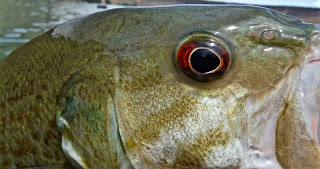 “Are they always red?” Gracy asked, after her bass made a splashy get-away.
“The small mouth bass usually have red or orange eyes. That’s another way you can tell what kind of bass you have.”  I said, and she started to cast again.
“Hold on, I want to switch your popper.” I said, taking out my box, and selecting the smallest popper I had.  I clipped off her purple popper and Gracy tucked it back in its place while I tied on her new fly, and it was just what the doctor ordered.  On her first cast she hooked into a bluegill that took her fly like it was going out of style. 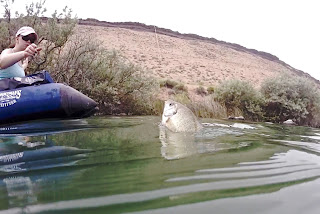 With a much smaller popper, the bluegill were almost swallowing it. This made it a little harder to get it out of their mouths, but with the numbers of fish we were catching, it was worth the extra effort. 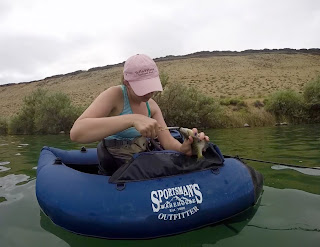 Gracy dipped her bluegill under the water, and waited until it kicked away to its home. 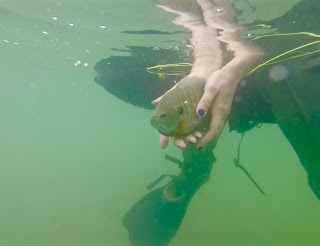 I happened to be floating over some little fish, and figured if I didn’t move they wouldn’t spook.
“Quick, cast your popper over here.” I said, dropping my camera into the water.  Gracy tossed her popper over near me, and when she gave it a pop, it got the attention of a little bass. 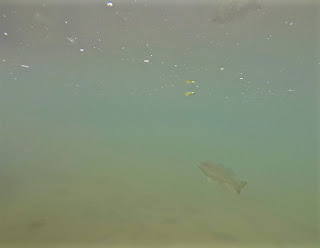 One last jolt, and the bass took the popper.  It was not the biggest bass in the world, but it put up a nice fight.  The little fish was swimming my way as I grabbed Gracy’s line and brought up her fish to unhook it. 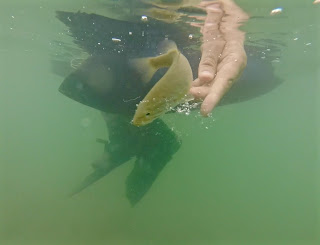 “They like this little popper.” Gracy said, after releasing another fish.
“I think it’s just because they can fit it in their mouth.” I said back.
“Are you ready to get going?” I asked, after we had our fill of catching.
“Yep!” She said, turning her float tube around.
“Are you having a good time?” I asked.
“Yep!” She replied, with a smile and a thumbs up. 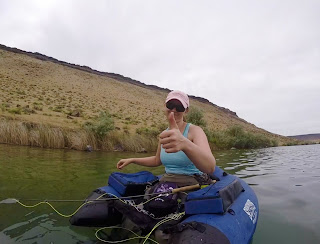 I was sure to stop by the gas station to pick up a cold smoothie for the drive home, along with a few snacks to keep Gracy happy. When she was a kid she used to love going fishing, because it was the only time her parents allowed junk food. I like to think I’m keeping up with her family tradition by supplying the white cheddar popcorn she loves; and the best thing is that I actually like fishing with her.