Skip to content
It was nearing the end of the workday when ol’ Terry Kowallis came through the doors.
“I got a hall pass for tonight, can you sneak out to fish?” Terry asked me, as he started picking out poppers from the tray.
“I think I can arrange something.” I said, knowing I had nothing planned for the evening. Terry has access to a private bass pond out in Star, ID, so I was going to do whatever it took to go.
“I’ll swing by your place and pick you up on the way out.” Terry said, as the clock struck 6pm: closing time.
It was a miracle. It’s always when you are excited to get somewhere when everyone seems to be in your way, or you hit every red light… but not today.  Green, Green, Green all the way home, and there was hardly any traffic at all.  I made it home in record time, and had all of my gear out when Terry came to pick me up. 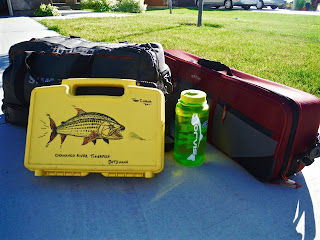 “Heck, we are just going to a little bass pond. What do you need all this stuff for?” Terry asked, after I had loaded all my gear into his truck.
“You never know, Terry!” I said. With the pond being in Star, which is only about 20 minutes from my house, we were there in no time at all. 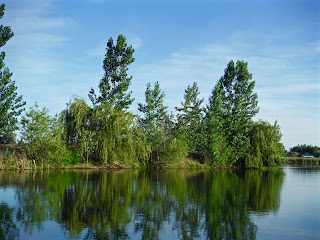 Terry got the boat ready as I put together my fly rod.
“Go cast off the dock while I rig up my rod.” Terry suggested, and he didn’t have to say it twice. By the time he had his rod rigged with a popper, I had hooked into three bass and was waiting for him to back up the drift boat. 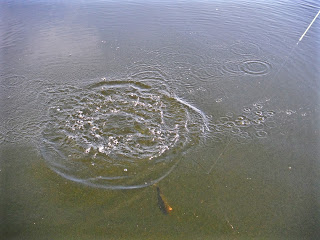 I got behind the sticks first while Terry slammed his popper near the tall reeds. The water was as still as glass, until Terry jerked his popper to life. 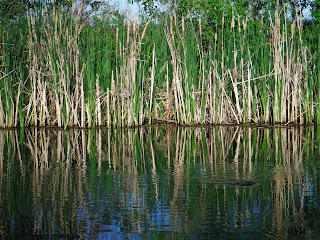 WHAM! The bass came out of the water to kill his popper, and Terry set the hook fast.
“That was my third cast. If a fish hadn’t hit that one, I would have thought there was nothing in this pond.” Terry said, bringing in his fish. 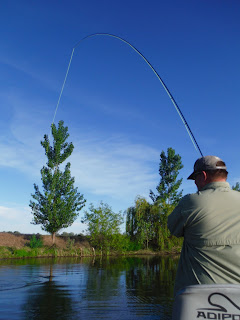 A quick release, and Terry was back at it.  Just as suspected, his popper was hit again, this time with such voracity, that if you didn’t expect it, it would scare you half to death. 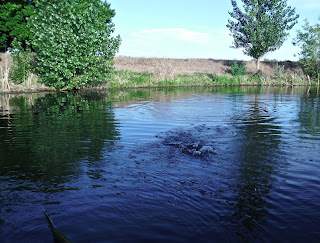 It was finally my turn, and I didn’t waste any time getting my fly where it needed to be. I was armed with my 7wt. so my fly hit hard when it landed.  Slap! Slap! Slap, it hit, but nothing was eating my fly.
“You must have caught them all, Terry.” I said, still fishing like mad.
“Try over there,” Terri pointed, “I know there are is some structure underwater that is always good for a bass.” 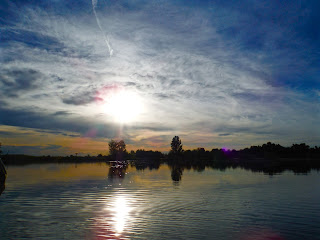 I was long overdue for a bass,especially at a private pond, and nothing took where Terry had suggested.  I flicked out my popper, and it landed a bit off target.  Shoot, I thought, and lifted my rod to pick up my popper when a fish took right at that same moment.
“Hell, you couldn’t have timed that one better.” Terry said, as I brought in my fish. 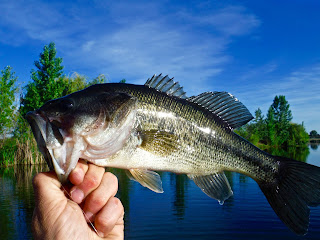 It was non stop catching after that.  Fish after fish we nailed, and all on a popper.  It was Terry’s turn, and he hooked into a fish right off the bat. It was a large pumpkinseed fish that was easily the size of his head. 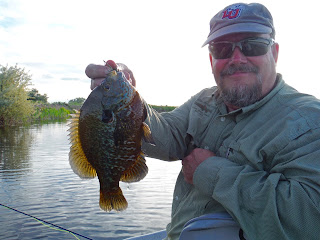 It was great catching bass after bass, but I really wanted a large bluegill or pumpkinseed.  I casted to all the little pockets of water in search of one, but only bass hit.  The sun was starting to set, which made the water look like ripples of silvery mercury when a fish hit my fly. 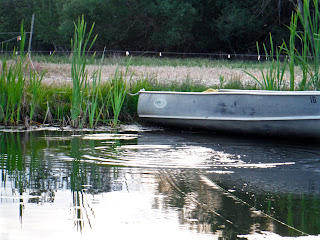 It was definitely starting to get dark, but the bass fishing was only getting better. 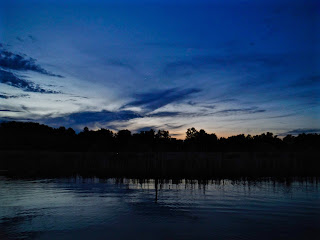 I slammed my fly down, and gave it some hard pops back when a fish ate it.  I set the hook, pulling my fly right out of the fish’s mouth. I quickly got it back out to where I had yanked it away, and the fish was still there.  It hit my fly again, and I yanked it away, again without hooking the fish. 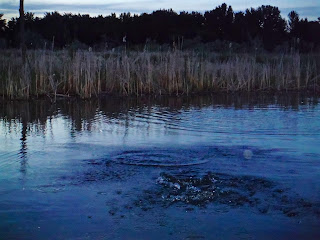 I quickly plopped my fly out for a third time, to the same fish, hoping it would still be there.
“It already gave you two chances; it probably figured that was enough.” Terry said, as my fly hit the water.  SLAM! The fish hit!
“He isn’t getting away this time, Terry!” I yelled, as I brought in my fish. 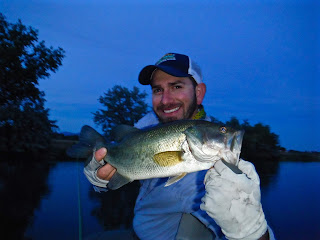 “I think we need to be off the pond by sundown.” Terry said, as it got darker yet.
“How can you have a private bass pond, and not expect people to say late when that’s the best?” I asked.
“Well, you are up, because I can’t see anymore.” Terry said, reeling in his line. 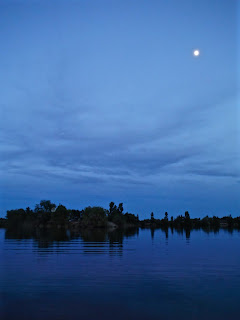 I didn’t waste any time switching him spots again. It was getting hard to see, but there was just enough moonlight for me to make out the bank.  Terry was rowing to the dock to end the night, as I pitched out my popper into the darkness.  Things had slowed down, which isn’t saying much. I still caught plenty of fish along the way, but after I dropped Terry off so he could get his truck, I oared myself out one last time.
Give me one last fish, I thought as I casted my popper again and again.  The white reverse lights shined in my eyes as Terry backed up the railer. It was time to go, so I had myself one last cast. I was reeling in my line with every pop, and heard a splashy take. BOOM, a fish was on! 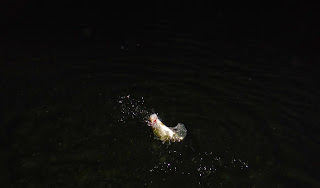 “Is it a big bluegill?” Terry asked from the shore.
“No, it’s a bass, but I’m not complaining.” I said back, lipping my bass and taking out the popper. I secured my fly rod in the boat and oared back to Terry, who hooked it up to the trailer to take it out.
“Well thank you for coming along, that was fun.” Terry said, as we got back into his truck.
“How many fish do you think we caught?” I asked.
Terry thought about it for a sec’,“It would have to be 65-70 at least.”
“65-70?” I asked, amazed.
“Math was never my strongest subject.” Terry said.
“Mine either, 70 it is!” I said with a laugh, as we headed home to end the night on a sobering white lie.