Skip to content
It was only a matter of time before my little brother, Bryan, would make his way back to Boise to visit, and when he did I would take him fly fishing, because it’s the only time he gets to go. Despite his lack of knowledge on the subject, Bryan always catches fish when we go out. He is a quick learner and does exactly what I suggest.  I always have a place to take Bryan that will hopefully allow him to catch some fish with little effort, but this time he made the call.
“I want to go to the place that has the trees in the water.” Bryan said, looking at my Facebook page.
“That’s Lake Lowell. But I can’t guarantee you will get a fish.”
“I don’t care, I want to walk and fish around in the trees.” He said, “It looks cool.” 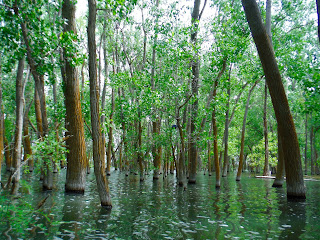 We arrived at the south side of Lake Lowell and immediately went to look at the water. Bryan was walking just ahead of me when I yelled at him.
“Stop!” And he halted.
“What?”
“There is a bass there.” I said pointing near a cluster of trees. It took Bryan a second before he spotted it, but after seeing the bass we both ran back to the car to gear up.
“I want that bass, Erik!” Bryan said eagerly, as I tied a small popper onto his line. Armed with my ten foot five weight, Bryan bolted to the trees and flicked his popper into action. 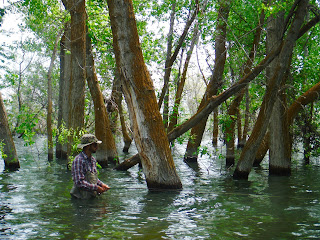 “Do you remember how to cast?” I asked, as he pulled out more line for a longer cast.
“Nope.” He said, and before I could offer any advice he flicked the rod forward sending his popper right into a low hanging branch.
“Hmmm.” Bryan mumbled after his failed attempt.
“This is going to be a long day.” I said to him, as he plucked his popper out of the branch. 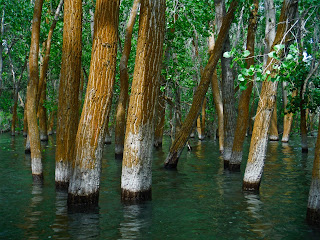 Some quick pointers and Bryan was back in business. The little popper was being hurled in between every stump and shrub, but nothing was interested in it.
“Let’s change things up a bit.” I said, snipping off the little popper and replacing it with a larger one.
“Do you know what’s special about this popper?” I asked.
“It’s yellow?”
“Nope, it’s a Bruce Lee popper!”
“Oooooo!” Bryan’s eyes widened. 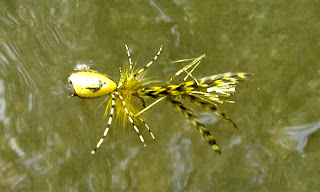 The morning had started off slow, but the Bruce Lee popper brought all kinds of confidence in Bryan’s cast. With every cast, Bryan added commentary by explaining how to fish with the Bruce Lee Popper, with his obviously-practiced Bruce Lee accent.
“First you have to take your popperrrr, and swam it down!” Bryan continued… “And you have to put your hip into it, and then swam it! His popper slammed down near some trees. Bryan looked at me and said, “And that, my friends, is a very hard ting to do…”.
All was interrupted when a bass came up and slammed the Bruce Lee popper!
“Ooop, ooop!” Bryan yelled, failing to find words in his excitement. 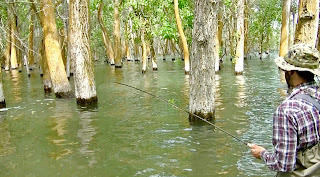 “Same spot, Erik!” Bryan reminded me, after I had just told him not to keep throwing the popper in the same spot. But it had worked.
“On the Bruce Lee popper and everything!” I said happily, then I got a good look at his bass. One side of its mouth was a bit tore up, meaning that this bass had been caught a few times.
“Aw, that fish has been caught so many times… you caught the one dumb fish in here.” I said with a laugh. 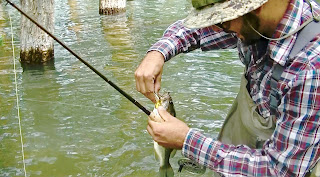 I wanted to get a good picture with him and the fish, so I said, “Hold it up so I can see it”, but right at mid-sentence, the fish flopped out of Bryan’s grasp and splashed, unceremoniously, back into the water.
“Oh, you dropped it!” I yelled.
“Ohhh.” Bryan whimpered. 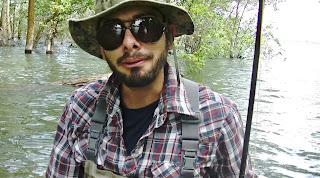 “Time to let him go.” Bryan said, as if he had planned it. We laughed it off and went back to fishing.
“Get your fly rod.” Bryan said, because I had yet to pull mine out.
“I wanted to be sure you got a fish first.” I said, before I grabbed my rod to start fishing. 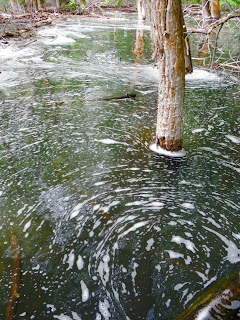 Bryan and I had split up, but we could still easily see each other amongst the trees. Now that I was in the thick of it all I could tell that casting a fly rod was not going to happen. 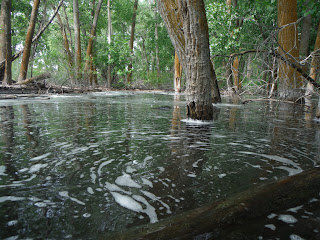 Armed with my 4wt. fly rod, I had on a small brown leech that I would slingshot-cast in and around bushes and tree stumps. The wind was starting to pick up, but the trees and bushes acted like a jetty to keep the water calm where we were.  Some movement in the water caught my eye, and I pulled back and let my fly soar in front of the fish’s path. 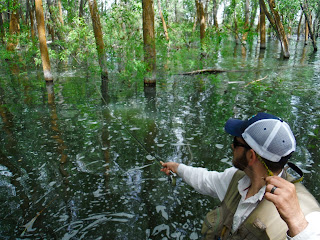 I watched my brown bugger swimming in the water and something was following it.  With the shade, it was hard to make out the type of fish, but when I saw the flash of a take, I set the hook on a nice bass. 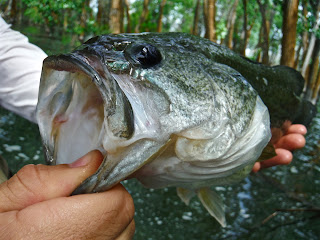 “How are you casting in here?” Bryan asked.
“Slingshot-cast.”
“Ah, Slingshot-cast…” Bryan said, and I showed him how it was done. 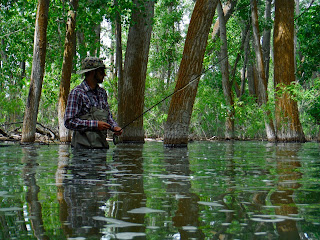 Bryan got into position, and held onto his Bruce Lee popper to take careful aim. 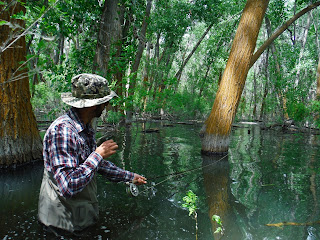 He let his popper fly, and it splatted down right in a very tight spot that was surrounded by bushes and sticks. Bryan quickly looked at me to see if I had just witnessed his accomplishment.
“Nice.” I said, giving Bryan the reassurance he was looking for. 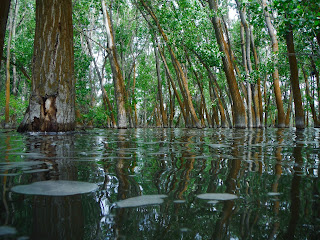 With the trees not producing anything, we decided to blow up the float tubes and try the perimeter of the lake. 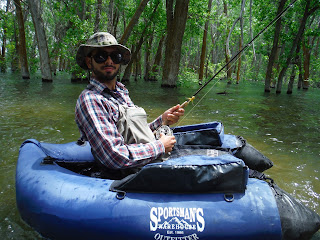 Just as suspected, the wind was creating quite the disturbance on the water.  Bryan was not terribly familiar kicking around in a float tube, but he got the hang of it. He switched to a perch pattern, but was getting no love. 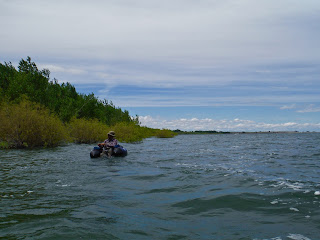 I too was not having much luck, so I kicked a bit closer to the bushes, casted further into them, and saw a school of carp.  I quickly presented my brown bugger, but the carp wanted nothing to do with it. I saw that there was a midge hatch coming off the water, so I quickly clipped off the bugger and replaced it with a chironomid.
Carp are spooky and a poorly presented fly can spook the entire school.  I aimed for the school, thinking that one should take, and started to cast.  After I got my distance down I presented a very delicate cast right in the middle of the school of carp. Oh no, I thought after my fly wrapped around a twig that I had failed to see. The leader wrapped around the twig one entire turn, before the fly hit a larger twig, causing it to recoil and unwrap from the original twig. The fly came loose and fell like a raindrop in the middle of the school of carp. That couldn’t have happened any better, I thought and made one strip before a carp ate my fly. 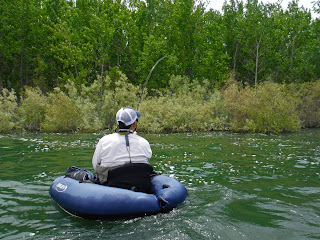 I had absolutely no control of this carp. As soon as it felt the pressure of the hook set, it bolted and there was no stopping it.
“I got a carp!” I yelled over to Bryan, “and it’s hooked on a 4wt fly rod!”
“I don’t know what that means!” Bryan yelled back.
“I don’t know if I can bring it in.” I said back, as the 4wt arched further than it ever has.  I could feel that the carp was tiring. I may be able to land it yet!
“It’s coming up!” I yelled happily.
“I can’t see it!” Bryan yelled back, but then its head popped up, tired from the fight. 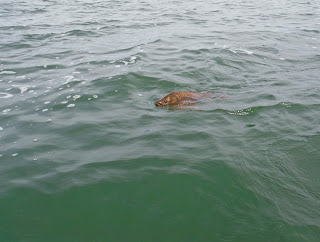 “Yuck!” Bryan said at first glance at the carp.
“I’m not sure I want to touch it.” I said.
“Go ahead, Erik, stick your thumb in there!” Bryan said with a laugh. 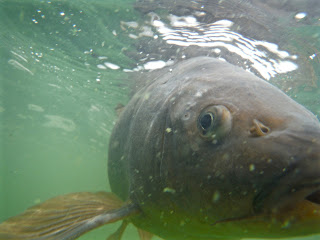 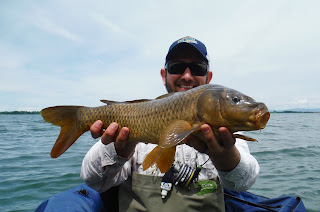 The carp slowly swam away after placing it back in the water, and I did my best to scrub the slime off my hands.
“That will be a fun fish to put on Dad’s father’s day video.” I said, as Bryan turned off the video camera.
“Yeah.” He said, and with the wind picking up, we decided to end our day on Lake Lowell.
“Fun day today.” I said.
“Yeah, I just wish I had brought my camera. It looks cool when you are in the trees.” Bryan said, “And let me know when you make the video, I want to see it.”
“I will!” I said, and we drove home so that I could sterilize my hands after touching the carp.

Here is Bryan’s portion of the Father’s Day video.

2 thoughts on “The Other Brother”