Skip to content
U“I need another boat in order to shoot this Hank Patterson video.” Travis Swartz told me over the phone, “and it’s your job to find me one”.
“How did this turn into my job?” I asked.
“When my guy bailed on me.” He quickly replied.
We had two days before shooting this video, and where was I going to find someone who was available, and willing, to lend me their boat for the evening? It’s awfully bold to ask another angler to hand over their boat, because boats are not cheap and each person has a specific way they like their boat rigged up. In all the years of fly fishing never have I ever seen two boats rigged up the same way, and it was no surprise that I was met with silence when I asked some of my friends to borrow their boats. Hey, I get it… I’m not sure if I would just lend out my boat if I had one.
By some stroke of luck my buddy, Jason Shepherdson, came through and let me borrow his raft in short notice. It’s a good thing my brother was in town to tow the raft out to Lake Lowell where Travis was filming, and you better believe we brought our rods to do some fishing afterwards. 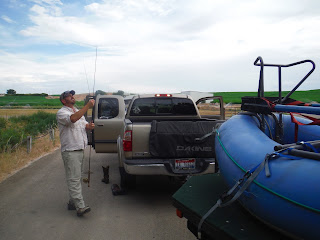 It was not surprising at all that there were cars and tents set up right on the Lake Lowell boat ramp, but my brother was able to back up his truck to launch the raft between it all. 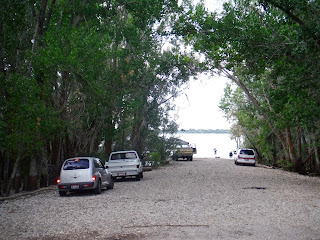 “What up Dawg?” Travis yelled over to us, as I oared out to where they were filming.
“Just performing miracles, as always.” I said back.
“Here we go…” Travis said, rolling his eyes. Christian and Chris Gerono were there, along with Adam, the camera man, who hopped in our raft to get a wider shot for the new video. 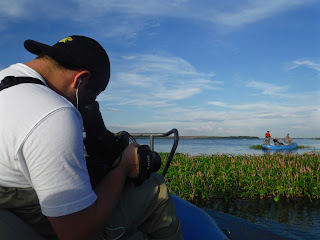 While they were filming, my brother was casting from the back of the boat.
“I got one.” Feef whispered to me, and I could see he was keeping his fly rod low to keep from making too much noise. I gave him a thumbs up as he brought it in, but soon after the fish shook free and he went back to casting.  From the other boat, Travis was making all kinds of jokes as Hank Patterson, leading us to believe this would be one of his best videos yet. 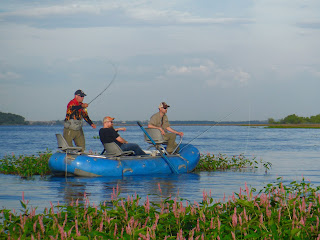 “We’re done!” Travis announced, “and I would like to thank all you guys for helping out: Christian, Chris, Erik’s brother Kris, and Adam. I couldn’t have done this without your help.”  Travis then focused right on me, with a blank disappointed look on his face.
“Douche bag!” I said, looking back at him.
Travis then started laughing, “I can’t believe you found someone willing to let you, of all people, take their boat!”
“My buddy, Jason, came through like a champ!”
“Well, I’ll thank him in the credits.”
“Good idea.” I said, and by now Travis and his crew were taking off for the evening.
“Are you guys going to stick around and fish?” Travis asked.
“You bet your ass we are!” Feef chimed in, and we waved goodbye as I oared away to let Feef fish. 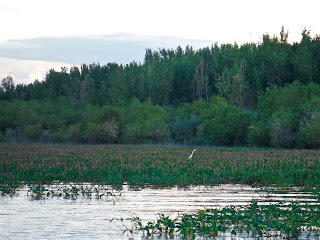 “It’s about time, Brother!” Feef said with excitement, as he stripped out line to make a cast. 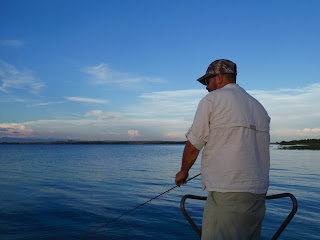 “Come on fish…” Feef said out loud, as he focused on his fly. I kept an easy cast-able distance from the weeds so I wouldn’t spook any nearby fish. 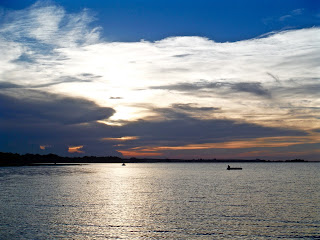 “We are lucky to not have any wind out here. Usually it picks up to the point where we wouldn’t be able to fish.” I said, as Feef focused on fishing.
“That’s nice, but where are the fish?” Feef said, annoyed that he was able to hook into two fish while filming but nothing now.
“I don’t know, Brother… you’re hitting all the right spots.” I reassured. 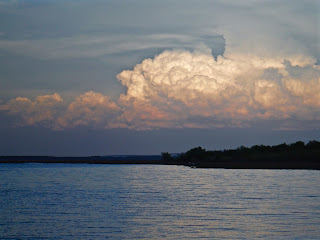 A bass slapped the surface of the water and Feef turned on a dime to shoot his fly over to it.
“There you are.” He said, seeing the ripples in the water, and letting his fly soar. 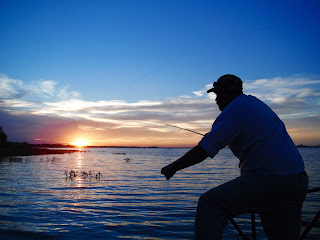 “That was a terrible cast, Brother.” I said, “Why didn’t you just cast over there…” I said, pointing in the opposite direction from where his fly landed, “…that would have been closer.”
“God! I don’t fish everyday like you do!” Feef snapped, obviously annoyed he wasn’t getting any fish.
“Don’t get mad, Brother… Maybe there is a bluegill nearby that you can catch.” I said, laughing.
“Shut up.” He said, keeping his eyes on the water. 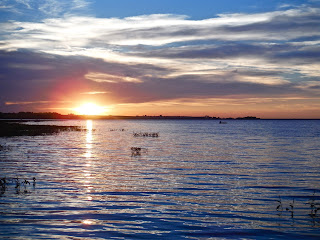 Honestly, I was not sure what was going on with these fish. They should have been actively feeding at that point, but we were not seeing anything. We used sinking tips, poppers, leeches of all colors, and fish flies, but nothing was working.
“Well, Brother… If nothing else, at least we caught this beautiful sunset.” I said.
“That’s stupid.” Feef said, bitterly annoyed with the fish. 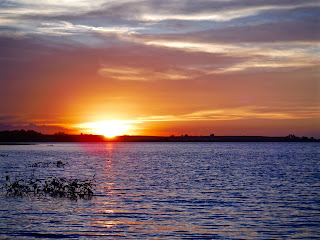 All of his annoyance was making me laugh, which in turn made him laugh.
“I really wish you would catch a fish.” I said, as we both started laughing again.
“A bass!” Feef yelled, and we both were looking into the water. Feef pitched his fly in front of the bass, and gave his fly a tug to bring it to life. The action intrigued the bass, and it took his fly.
“Got it!” Feef yelled, then his fly line went slack.
“GOD DAMN IT!” He yelled after the fish spit the hook. His words echoed across the still night, which made it hard for me not to laugh. 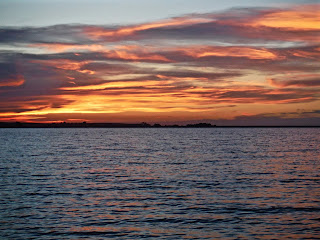 “It was right there, and I didn’t get it.” Feef said, reliving the moment. I could see the disappointment in his eyes, and the frustration that covered his face. The boat was now shaking like a poorly stuffed washing machine on spin cycle, as I laughed in silence. Feef started laughing as well after seeing the humor in misery.
“It’s getting late; we need to head in.” I said, catching my breath.
“I’ll keep fishing.” Feef said.
“If that’s what you want to call it?” I said, laughing a little more.
Feef was gunning his casts out fast, and in the process performed a poorly timed cast that caused his leader and fly to get all tangled up.
“Just keep casting, that will get it out.” I said, after seeing Feef didn’t want to deal with a knot right now.
“Figures this would happen.” Feef said, finally stopping to deal with his knot. 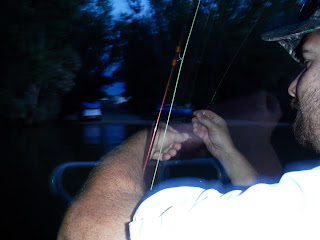 We had reached the boat ramp, and Feef had just managed to untangle his leader.  I stopped the raft from getting too close to the bank, to let Feef cast a few more times before heading in.
“Well, that sucked.” Feef said, after we tied up the raft to head out.
“Well, why don’t we plan to hit a high mountain lake while you are in town? That should fish better.” I said.
“Yeah, that would be cool.”
“Okay then, let’s do it.” I said, getting his spirits up for a better fishing experience.