Skip to content
My brother, Kris a.k.a. Feef, has been working non-stop at his new job, and though the company he works for is stationed in Southern California, he currently lives in Las Vegas where there is little fly fishing to be had.
“I want to hit that Owyhee, Brother!” Feef said to me. I could tell by the tone of his voice that he was starving for some dry fly activity.
“You got it, Brother!” I said, “I have all the gear you will need, so don’t worry about packing anything on the plane.”
“Thanks, Brother!” Feef said, and the next morning he was in Boise. We wasted no time getting out to the river. 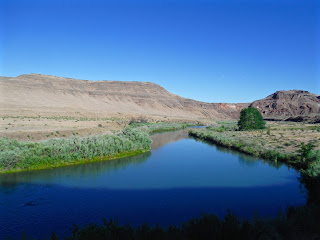 “They are rising everywhere, Brother!” Feef said with wide eyes.
“Let’s do it!” I said, breaking Feef away from just staring at the river. I quickly rigged his fly rod first so he could get out to the water, but when it was ready he was still staring at the river.
“Look at them all… That’s a big one there!” Feef said, pointing.
“Is that what you want to do? Just stand up here and look at big fish rising, or do you want to go catch them?” I said with a glare.
“I don’t get to see this all the time, Brother!”
“Well?” I said, handing him his wading boots, “What are you waiting for?” He took the boots, put them on in a flash, and was down on the water fly fishing while I finished gearing up. 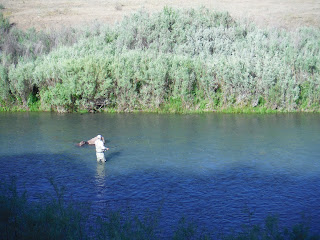 “Brother what are you doing?” I asked, as Feef presented his fly wildly to some rising fish.
“I know you haven’t fished in a while, but this is pathetic!”
“They are not taking my fly!” Feef said while keeping his eyes on the rising fish.
“Well you need to time it, and cast close to it.” I advised.
“Ok.” Feef said, and went ahead and casted the exact same way he had been casting before. 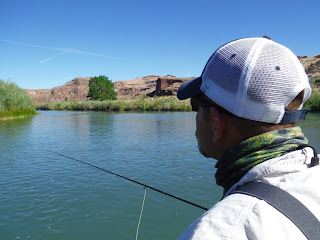 “I can’t take this anymore, Brother!” I said, unhooking my fly to make a cast.
“What?!” Feef yelled.
“You are not timing the fish. You are casting twenty feet in front of it when all you need is three to five feet, and your fly is sinking.” I said, irritated.
“I just wanted to come out and have a good time fishing with my brother…” Feef said, with his voice trailing off and sounding sad.
“Cast to the fish.” I said, and he did. The fish took his fly and he set the hook, but the fight was over before it started.  His hook came flying out of the fish’s mouth, and Feef yelled with frustration. It was then when I unhooked my fly and started casting for the fish behind him.
“That’s how you do it, Brother!” I said, bringing in my first fish of the day. 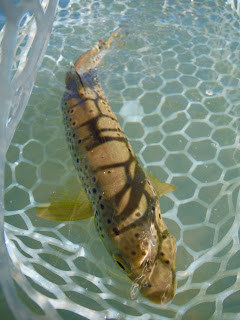 After I had hooked a few more fish, Feef was frustrated with our current spot and wanted to leave. To be honest, I too was wondering what these fish were keyed in on. I was catching a few, but I was not 100% keyed into what they were eating.  We arrived at another spot, and we couldn’t see any rising fish.
“Come on, let’s go!” Feef said, after he didn’t see a rise.
“Hold on.” I said, concentrating on the water a little harder. 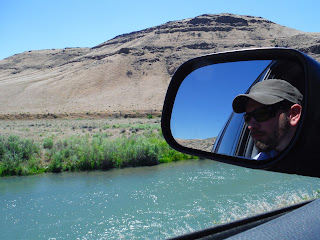 Polarized sun glasses help with sighting fish like nothing else, but sometimes by tilting your head you can pick up other subtleties that are easily missed.  Sure enough, after a light head tilt I was able to make out the smallest disturbance on the surface of the water.
“They are here!” I said, and we got out to fish.
“Let me change up your fly.” I told Feef. On the water was a weird looking fly with a slight green body, almost like a midge with a caddis-green belly. And, now that we were water-level, we could see fish rising everywhere.  I pitched out my fly to a rising fish, and it didn’t hesitate to take it.
“Got one!” I said.
“Me too!” Feef said back. 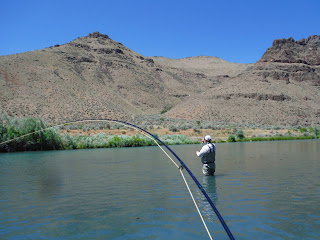 “It’s a double-up, Brother!” I yelled happily, as we both brought in our fish. I brought out my net and scooped in Feef’s fish, then scooped in my fish so they were both snuggled in the net. 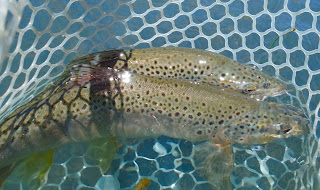 “Let’s get a shot of you holding both fish!” I said, and Feef didn’t hesitate.  Surprisingly enough, he was able to hold both fish for a picture without either one trying to flop away. 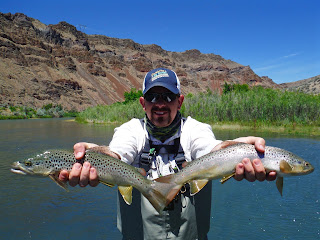 Our fish bolted away, and back to fishing we went. The nice thing about fishing today was that we figured it out. These fish were keyed into this small fly with the green body, and together Feef and I did not let up on the catching. 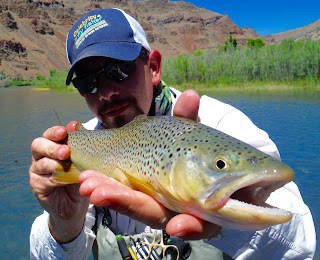 “This is what I needed, Brother!” Feef said, bringing in another fish.
“Well look at him!” I said to Feef, “He’s back!” Feef just smiled, as he brought in his fish quickly, unhooked it, and let it go.
“Well how about you get a picture of me?” I said after I hooked up.
“Well, give me your camera!” Feef said hotly, obviously not wanting to take up time from fly fishing. 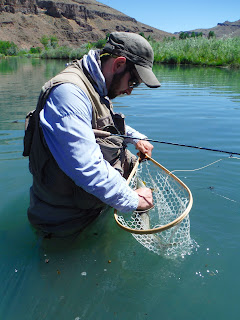 “You know… You would still be over there, pissed at the world, not catching any fish if I hadn’t figured out what fly to use.” I reminded him.
“Well, are you going to hold up the fish?” Feef replied, not hearing a word I said. 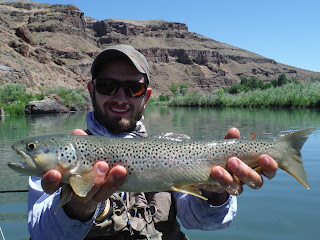 I dipped my fish back into the water, and just as it kicked away, Feef was into another fish.
“Oh, this is a nice one, Brother!” Feef said, “Definitely want a picture with this one!”
“Nah, I’m too busy…” I said to him, not even looking in his direction.
“That’s messed up, Brother…” Feef complained, but I reeled in my fly to get a good shot of him with his fish. 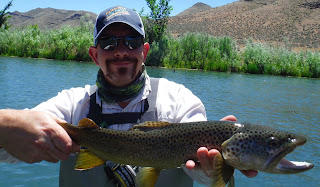 “I’m starting to get hungry.” Feef said, and rightfully so; it was just after 2:00 p.m.
“Let’s catch a few more, because the fish are really on right now.” I suggested, so we stayed. Just as suspected, we both hooked into a fish in no time at all. 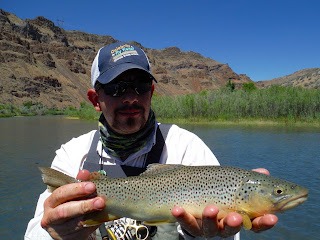 “Okay, one more fish before we go eat something.” Feef said, and he wasn’t kidding.  He hooked into a fish quickly after his statement, and headed in. 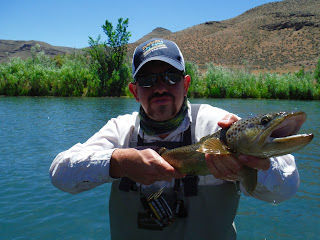 I too caught a fish, and followed him up to the car.
“Fishing has been good for us!” I said, as we ate lunch.
“Yeah, but my head hurts.” Feef said with a mouth full of sandwich. “I kind of want to get going.”
“What?!” I retorted, “has living in Southern California made you soft?”
“No, I just have a bad headache.”
“You always find a way to screw up the day!  The fish are biting like crazy, we figured out the fly, it’s a cool 75 degrees out, there is hardly anybody out here… But oh no! Feef wants to go home!” Feef gave me the most pathetically sad look he could manage, even with his headache. 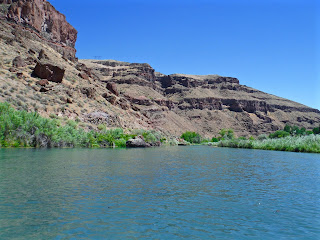 The fact of the matter was, that we went out there to catch a few fish on camera to make another small video for Father’s Day. That had definitely been accomplished, so leaving early was really no big deal; and Feef had paid for my Oregon fishing license for the day.
“Ok, Brother, let’s get going.” I said to him, and he was all for it. We both geared down, and when we did I looked back into the river to see many rising fish. The thought of leaving all these rising fish behind seemed like a crime, but the amount of fish we had caught would make a good addition to the Father’s Day video, and that was most important.

7 thoughts on “Little Flies on the Owyhee”