Skip to content
Where the hell am I, I wondered as I hit the snooze button on my 5:30 a.m. alarm, and easily fell back to sleep.
“Errrrik?” I heard a familiar voice call from outside my door, and a smile grew bright on my face. How could I have forgotten? Both Mark Grajcar and I had left Boise, after work, arriving in West Yellowstone at 1:15 a.m., and from the excitement we didn’t get to sleep until 2:00. We had both agreed to wake up at 5:30 to be one of the first boats on the water… The lack of rest had fooled my mind into drifting back to sleep, but when Mark spoke up to wake me from my trance, I remembered… I’m in Montana, Baby! 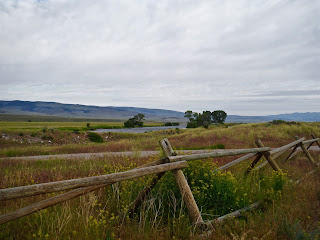 Mark’s Pop-Tart sprang from the toaster, which was the last thing we were waiting for before heading to the Madison River. The local reports suggested floating the lower section of the river for the best dry fly activity, so that’s what we did. 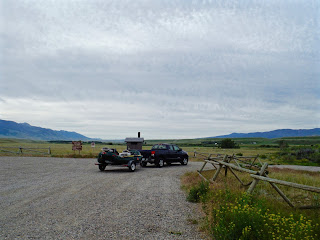 “I saw a salmon fly!” Mark yelled over to me from the bank. I was in the boat, behind the sticks, waiting for him to jump in.
“Do you have one tied on?” I asked.
“You know it, Baby!”
“Then let’s do it!” I said, and Mark dragged the boat into the river, then jumped in to start fishing. 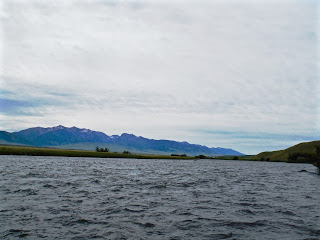 Mark fired his flies next to the bank, and they landed with a kind of grace that only Mark Grajcar could produce.
“Oh! That’s it, right there… Boom.” Mark yelled, complimenting his own cast. His salmon fly was sitting on top of the water as bold as day, but it was the second fly that was about to get some attention. 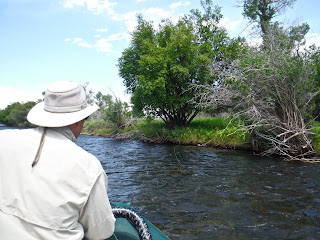 Tied off the back of his salmon fly was a purple chubby that looked quite small next to the adult salmon fly.
“Come on fish, right here!” Mark said as his fly hit a small pocket of water that he was aiming for. SLAM!
“There it is, Mark!” I yelled. The fish took so fast that it was hard to tell what it had taken: the salmon fly or the purple chub.
“It took the purple chub!” Mark yelled, as his fish came to the surface, flailing its head.
“Whoa!” Mark yelled, after he reached the net out to the fish and, at first sight of it, the fish bolted again.
“Mark, don’t screw it up!” I yelled out, adding to the pressure and excitement. Despite my heckling, Mark was on it. He didn’t take his focus from his fish for a second, and when the opportunity to net the fish presented itself, Mark didn’t hesitate.
“Oh that’s a nice one, Mark!” I said, now being able to get a full view of the fish.
“What do you think it is?” Mark asked, referring to the size. “19 or 20?”
“Easily a 30-inch fish!” I yelled, sarcastically. 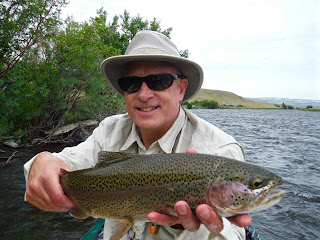 I quickly snapped a shot of Mark’s fish, but the fish was not up for two pictures.  Right as I pressed the button to take a second picture, Mark’s fish sprang to life, leaving us with a nice fish-flop photo. 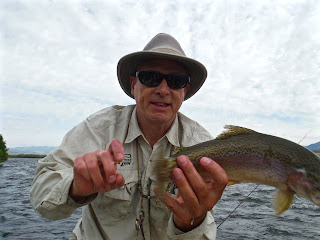 Mark’s fish swam away fast, and we were back to fishing. I oared hard to get Mark into a good casting position, and he didn’t disappoint. Another great cast, this time with a mid-air mend, and his flies landed deliciously.
“Oh yeah baby, right there!” Mark said, extremely pleased with his cast.  His flies drifted nicely into a pocket, and WACK!
“OH NO WAY!” Mark yelled, setting the hook. “On the purple chubby again!”
“Grajcar, that’s his name. Catching the big fish is his game!” I sang loudly and off key, but it didn’t matter because the fish were hungry and we were here to take advantage. 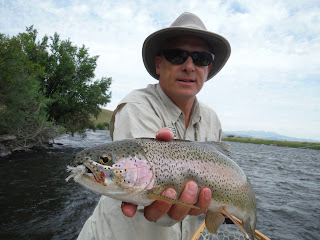 With Mark’s back-to-back success, it was my turn to be at the front of the boat. With the success brought by the purple chubby fly, I removed the adult salmon fly pattern and replaced it with the purple chub with a caddis dropper. I was a bit concerned about doing this, because the further downstream we went the more salmon flies we saw. 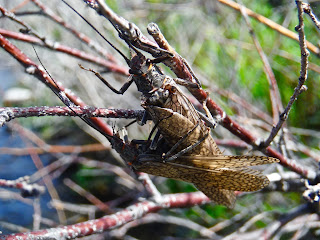 The seagulls swarmed overhead, devouring every bug that flew over ten feet high. With that many birds both Mark and I were lucky we were not getting pooped on. Every once in a while we would see a splash in the water, out of the corner of our eyes, that we thought was a rise and ended up being a droplet of poop. 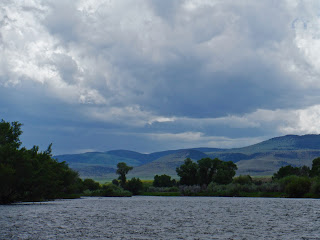 “River looks better over there.” I said to Mark, who turned the boat and oared over to the other side of the river. I pitched out my flies, and none of the fish seemed to be interested.
“I think you caught all the fish in this river, Mark.” I said, after having fished for a long while with nothing to show for it.
“Come on, you’re Erik Moncada!” Mark said, “These fish should feel privileged to be caught by you.”
After so long with no hits you begin to doubt your flies. With a lack of confidence, I pitched out my fly and a fish took.
“It’s a brown trout!” Mark yelled, as I set the hook and heaved the fish in fast.
“Man, you brought that in fast.” Mark said, after I had netted the fish in record time.
“It took the purple chub.” I said, taking the fly out of its mouth before I held up the fish for a picture. 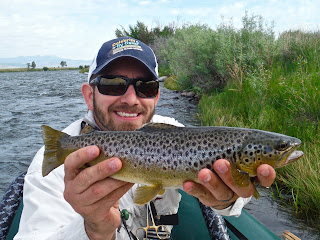 “That was a nice brownie, Erik.” Mark said, after my fish swam away.
“Hey thanks, Mark!” I said happily. Before we went back to fishing it was time for a sandwich, so we both kicked back for a bit to enjoy the scenery. 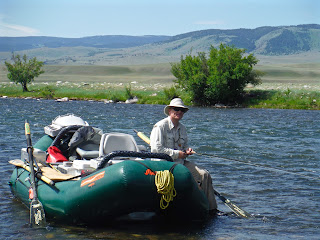 “What a nice river.” Mark said, in between a bite of delicious sandwich.
“It is nice.” I said back. We both were just happy to be in Montana, so it could have been snowing with gale force winds and we would have said the same thing. Fellow anglers were drifting by, and as we looked over they waved.
“How are they fishing?” Mark said, waving back.
“Look’s like they are nymphing.”
“That’s just sad.” Mark said, in a snobby voice.
“But they are probably catching more fish than we are…” I added. 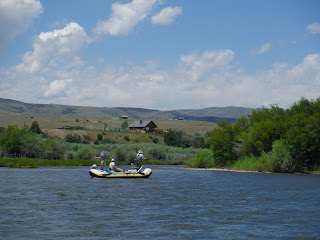 Mark was long overdue to be at the front of the boat, and catching had drastically diminished the further downstream we drifted. Mark’s surgical casting was ever so precise. Even in the lull we were going through, he didn’t miss a single pocket or back-eddy that could possibly hold a fish. 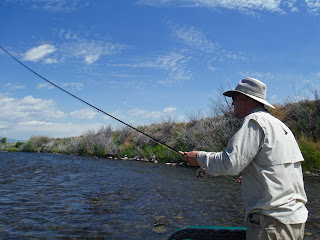 Finally one of his casts paid off, and a small brown trout smacked the purple chubby fly right behind a bush.  The little fish did its best to shake loose, but with the lack of fish we were experiencing, Mark was not going to lose it. 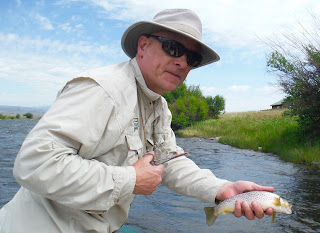 The little brown trout kicked away fast, and it was my turn to fish.
“Seems like the fish are getting smaller.” I said, casting my fly.
“Yeah, I’m surprised you wanted a picture of the last one.”
“Small fish have feelings too, Mark.”
“You know, Erik, you are so wise beyond your years.” Mark finished, in a calm philosophical voice.
“Well thanks, Mark.” I replied, with my own version of a philosophical voice, “I try to look at all creatures of life…”.
“Whoa baby!” Mark yelled, looking off to his left at my fly, that was just taken by a fish.
I had completely missed the take, but I set the hook just in time.
“There I was, dinking around instead of paying attention again.” I said, fighting my fish.
“Well with those Erik Moncada reflexes you have…” Mark said, trailing off to hand me the net. One swift scoop was all I needed to capture my fish.
“Oh browny like Erik!” Mark laughed, as I pulled up a nice-sized brown trout. 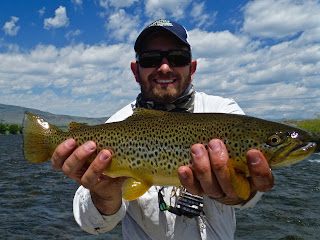 The Madison River looked like one big riffle, which makes you constantly second guess whether or not you should have your fly near the bank or in the middle of the river. All together we only brought eight fish to the boat, unless you count the five-inch fish Mark caught near the take-out… And you better believe he counted it. 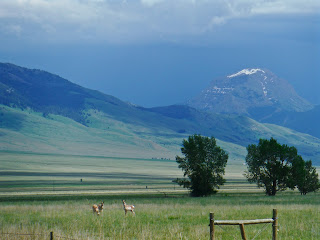 On the way back to the cabin, Mark pulled over so that I could snap a picture of some antelope we saw near the road.
“That’s a beautiful shot, and with that mountain in the back drop…” Mark stopped his sentence, failing to find the words to describe the beauty of Montana.
We arrived at the cabin where we got to see my grandfather and Lois before bed time.  Arriving late the night before and waking up early to hit the river had really taken it out of us.  As my little brother would say, no better sleeping pill.