Skip to content
Having spent almost eight hours floating the previous day, not to mention the two hour drive back to the cabin, I was thankful we got to sleep in on this morning. Although we were in no rush to get home, we did want to fish one more spot on the way back.  After a short goodbye to my grandfather and Lois, both Mark and I got the boat ready for one more float on Quake Lake. 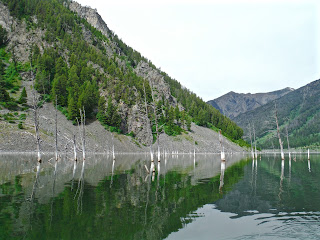 Quake Lake easily became my favorite lake to fish. Not necessarily because the fishing is fantastic, but because the scenery is like nothing else. 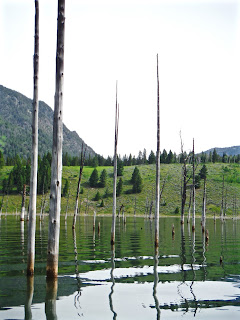 I hopped behind the oars to paddle out amongst the tree graveyard, while Mark sat in front with a dry fly on, looking for gulpers. 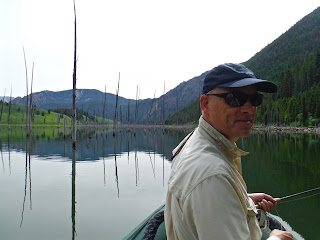 “Over there, Mark!” I said quickly, pointing off to his left.  There was a rising fish that had left a sizable ring of water as it ate, indicating that it may have been a big fish.
“I see it.” Mark confirmed, and the fish rose again.
“Get it, Mark, get it!” I said happily, and Mark started casting, casting, and then casting some more.
“Lay it down, Mark!” I said.
“Okay, but where did the fish go?”
“It’s gone by now.” I said, “You really have to be quick.”
“Well maybe I should see how you do it.” Mark said, and we switched spots. 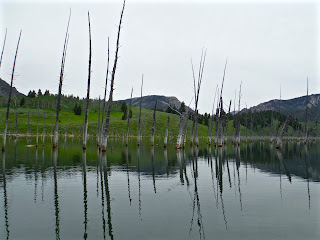 While gulper fishing you need to be fast, and if you do not have your fly ready you can easily miss your opportunity.
“It’s pretty slow out here.” I said, waiting for a rising fish. The worst of it was that the fish were not gulping; they would just rise sporadically, making it difficult to determine their direction.
“There! There!” I said happily, and started casting. I could see the fish just under the surface, and it was moving quickly.
“You have to get the fly in the fish’s path quickly, and not too close that you spook it.” I said, laying out my fly with a splat.
“There it comes, there it comes!” I said happily, and WACK!
“Oh, no way!” Mark yelled, laughing.
The fish took my fly and as soon as it felt the pressure of my hook set, the fish bolted deep.
“Whoa!” I yelled, as my reel screamed to life.
“Holy cow!” Mark added, surprised to hear the drag on my real come to life.
The fish could not be stopped, and must have wrapped me around a branch underwater, because after about ten seconds it was gone. 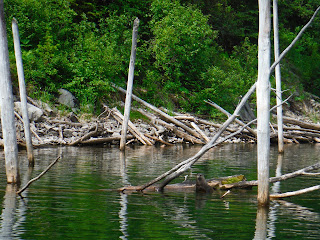 “Ready to give it another go?” I asked Mark, who was updated on just how fast he needed to cast.
“Yeah.” He said, getting to the front of the boat. We easily spent a few hours searching for fish. When we did see a rise, I did my best to oar Mark into a good casting position. The opportunities were not favorable on this morning, and we never did see another gulping fish. 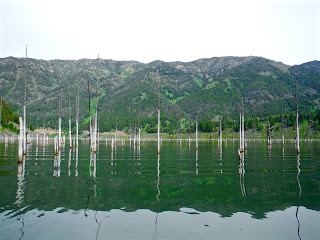 “I like this gulper fishing. It’s like we are hunting for the rising fish.” Mark said, as we started on our way back to the boat ramp.
“I knew you would, and Quake Lake is gorgeous.”
“Yes it is.” Mark replied, but it was time to get going. 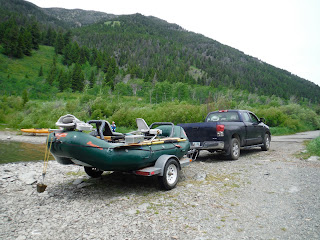 We had easily spent four hours on Quake Lake, cruising around in between the dead trees, looking for rising fish. But if we wanted to make it home at a reasonable hour we had to get going.  We bundled Mark’s raft up for the drive back home, and packed our fishing gear away.
“I would definitley come back and fish here again. I’m glad you brought me out here.” Mark said, as we started driving away from the lake.
“Well, it was here or Hebgen lake, and judging how slow it was this morning only means it was great on Hebgen.” I said.
“Well, we will need to hit that next time.”
“Until next time!” I said, holding up my water bottle. Mark raised his and tipped the rim as solute to our return; hopefully sooner than later.

1 thought on “Quake Lake in the Morning”