Skip to content
Prior to the Hewlett-Packard team building event, John was running around like a house-elf trying to put together the last minute details for the evening.  Are we having 30 or 50 people wanting to fly fish; what prizes should we put together, if any; what time is the event going to start?
“Is this going to work, Erik? Tell me this is going to work!” John asked me, after his contact at HP had changed the time of the event again.
“We have everything we need to make this event successful, now it’s up to the participants to take advantage of the opportunity they have.” I reassured, and what an opportunity it was. Ron Sali was kind enough to allow HP to host their event at his private Three Rivers Ranch off of Linder Rd: a 100 acre pond loaded with largemouth bass and rainbow trout that, if hooked, you could waterski behind. The agreement with Ron was that HP could use his place only if they donated to the Idaho 2 Fly Organization for men with cancer. With both sides in agreement, we, a collection of experienced anglers, showed up a few hours early to set up rods and reels for the attendees. 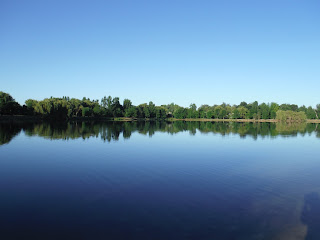 HP is in the process of dividing sections of their company, and the team of people responsible for all that work had been cooped up in offices and meeting rooms for a good part of the week. This team building/fly fishing event was HP’s way of thanking them for their work, and it offered a nice break from being inside. The employees of HP come from all over, from the other side of the country to the other side of the world, with 90% of them having never touched a fly rod.
John has his first encounter from a urban gentleman who, as soon as he stepped off the bus, asked, “Can I still get [cell phone] service out here?”.  John handled the situation well by saying, “I think you are going to be ok, buddy” and sent him over to grab a fly rod for the crash-course casting instruction. 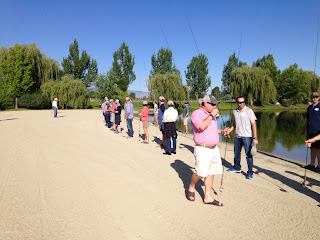 Attendees were lining up with their fly rods in hand, and you could tell they were happy to be out. A few of them were looking at their fly rods and murmuring to each other.
“I got a green one, that’s the good color to catch fish with!” One joked.
“Should I have gotten a green one?” Another asked sarcastically.
“Mine is reddish, do you think that will be okay?” A third guy asked.
I walked over to Darren Strong, one of the helpers, who was smiling as he heard the conversations.
“Sounds like everyone is ready for a good time.” I said.
“Let’s hope no one hooks themselves in the process.” He said with a laugh.
“Okay, I want everyone’s eyes up here!” John yelled, getting everyone’s attention so he could start the instruction. 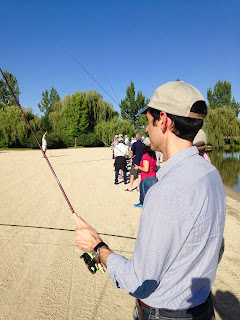 John was doing his best to project his voice above the crowd, but it was difficult with over 30 people trying to cast. I walked over to the very end where three ladies held their fly rods and were practicing their cast. One woman, whose name was Maureen, had a puzzled look on her face.
“I’m having trouble hearing him.” Maureen said, and the other two ladies standing to her left, Patty and Lachelle, agreed. I quickly started to get them up to speed, but realized it was pointless.
“Okay ladies, I’m going to tell you something and don’t take it the wrong way. There is no way you are going to learn to cast a fly rod in 15 minutes. It took me quite some time to get it down and we don’t have that much time this evening.”
“Yeah, yeah, I hear ya.” Lachelle said.
“So what do you say we skip this introduction, head that way…” I pointed to the far side of the beach, “… and start fishing?”
“Oh, we like you already!” Patty said, and together the four of us headed further down the beach. 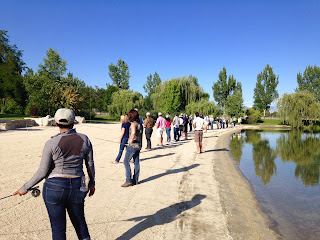 I quickly tied flies with de-barbed hooks onto their lines before I set my focus on one person at a time. Maureen was the first of the three in line to help, and after casting out her crawdad fly with no luck, I quickly switched over to a popper.
“How will I know when a fish hits it?” She asked, as I handed her the rod back.
“Oh…” I chuckled, “…you will know.” A few pops was all she needed before a bass took like a submarine breaking the surface.
“Whoa!” Maureen yelled, after the bass had completely leapt out of the water.
“Pull back! Pull back!” I yelled, “it ate your fly”.  Maureen brought her rod tip up, but the fish had shaken the fly off by then.
“Don’t worry, we will get another one.” I reassured her, and casted her fly back out. Boom! A bass took and Maureen’s rod shot to the sky. I showed her how to strip in her line, but with the fear of losing another fish Maureen did the one thing she knew would work: she ran backwards. 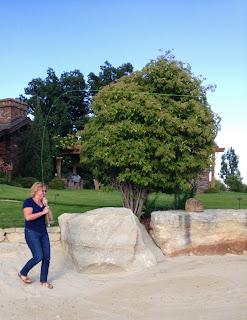 Her fly rod was doubled over with the weight of the fish, but Maureen didn’t let go.  She continued backwards until her fish was completely landed screaming, “I got one! I got one!” 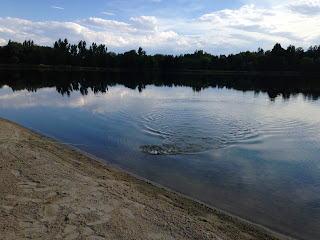 “Well, that’s one way to do it.” I laughed, running over to grab the fish. Maureen was right beside me and ready for a picture.
“Okay, this thing is going to kick, but hold it tight so it doesn’t flop out of your grasp.” I said, handing her the fish.
“Okay.” She said, and held up her fish for a hero shot. 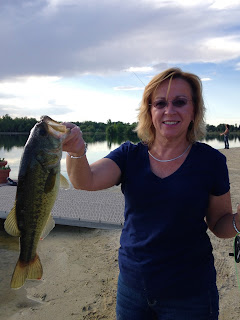 “Okay, keep fishing. I’m going to help Patty.” I said, and ran over to Patty before she could hook herself in the face with her wild casting.
“Mind if I cast it out for you?” I asked, after replacing her fly with a popper.
“Not at all.” Patty said, handing me the fly rod. With a quick flick, I sent the popper flying out into untouched water.
“Okay, give it a few pops.” I instructed.
“What kind of fly is this?” She asked,
“A popper.”
“Well, it’s named perfect.” She said, after bringing her fly back in.
“Let’s go over here.” I said, walking a bit further away from the main crowd and casting her fly out again. Patty had good popping technique, and the commotion her fly was producing looked delicious. KA-BLAM! 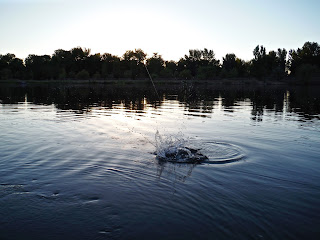 “Ahhh!” Patty screamed, setting the hook fast, and running backwards.
“You have a huge bass on!” I yelled excitedly, getting the attention of her colleagues. We all watched as Patty brought in her bass. Patty was beaming with the kind of smile seen in toothpaste commercials. 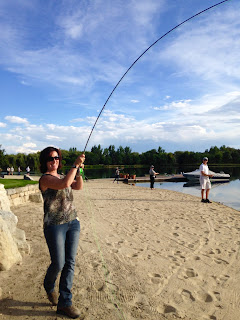 The bass was landed, and it took two hands for me to grab it and keep it under control.
“Ready for a picture?” I asked.
“Hell yeah.” She said, grabbing the fish without hesitation. 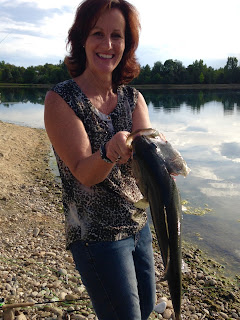 Patty placed her fish back in the water, and with one huge kick the fish took off, leaving us shielding our faces from the splash of water.
“Okay, keep on fishing, I’m going get Lachelle into a fish.” I said, then ran over to Lachelle and quickly tied on a popper.
“How have you been doing over here?” I asked.
“I think there is something wrong with this line, it’s not going out very far.” She said, as I clipped my forceps back on my lanyard and gave her a smile.
“You’re going to tell me it’s not my line, huh?” She asked.
“Casting fly line takes more practice than what we have provided for you today. How about I cast it out for you?” I asked.
Lachelle handed over the fly rod to me, but reluctantly. I could sense that she was not ok with me casting for her… She wanted to cast and catch a fish on a cast that she, and only she, performed. It takes one to know one, I thought. The look in her eyes, the hesitation to hand over the fly rod, the drive or need to do it yourself… She is the real thing, whether she knows it or not, Lachelle is a angler.

“Okay…” Lachelle said, realizing that it was not me wanting to take away her experience, but simply the cards that we were dealt today. “… okay, as long as I catch a fish and Richard doesn’t!”
“Who is Richard?” I asked.
“He is our leader, and everything is a competition to him.” She explained.
“Well let’s get your fish then!”
“Hell yeah!” She said, and I casted and handed her the rod.
“Set! Set!” I yelled, after a fish grabbed her popper from the surface.
“Whoa, whoa, you’re gettin’ all technical on me. I don’t know what ‘set’ means.” She said.
“Sorry, it means pull back and set the hook.” I said, casting her fly out again.  She took the rod back, and this time she nailed it.
“Aaaah, I got a fish!  I got one!” She yelled, as her fish grappled to free itself. 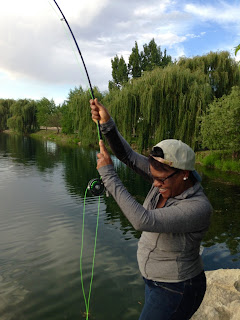 Lachelle’s rod was dancing like a night out at the club, but she had everything under control. I got down to the water as fast as I could, and lipped her bass as soon as I could reach it.
“Yeaaa!” She yelled, as I held it up for her to take.
“Oh… I’m not sure about this part…” She said, reluctantly extending her hand and grabbing the fish.
“It’s not so bad.” She said, referring to the experience holding the fish.
“Naaa. Ready for a picture?” I asked.
“Yeah, this one is for you, Richard.” She laughed. 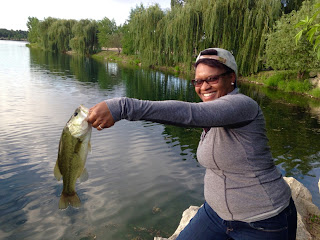 “Ok, you can throw it back.” I said, wanting a pleasant shot of her releasing her fish.  That is not what I got. She took the word “throw” a little more serious and flung her fish out as far as she could. 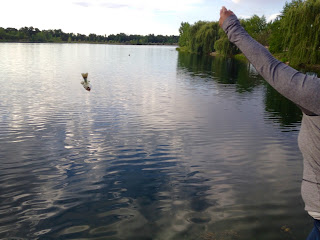 “NO!” I yelled, as her fish violently splashed down. I watched as the bass hesitated for half a second, then darted out of sight.
“You said, ‘throw it’.” She reminded me.
“I meant, throw…” I gestured gently towards the water, “… it back.” I said, laughing.
“Ohhhh!” Lachelle laughed.
It was time to head in for dinner, and despite John’s initial fear that no one would want to fish… it was quite the contrary.  Members of the team had to be dragged off the shore line, with the last one being, you guessed it, Richard. 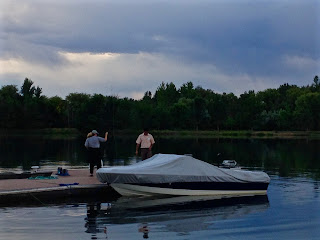 Richard ended up not catching a fish that evening, and I could hear Lachelle casually saying, “Hey Richard, it’s okay… Sure I got one, but it’s not a competition.”

“How did you guys do?” I asked, as I sat with the rest of the volunteers.
“One lady hooked herself.” Darren said.
“Noooo?!”
“Yep. John had to come over and get the hook out.”
“Tell him what John did!” Trent, Darren’s buddy, said.
“Well.” Darren smiled, “John came over to do the push the eye down and pull from the bend of the hook thing, and when he went to pull the hook out, the line slipped from his hand, driving the barb deeper.”
“Oh, God!” I said, covering my eyes.
“Yep, her eyes got huge, and we had to get her a full glass of wine to help calm her down. John did it again and this time got the hook out. ” Trent said, to finish the story.
It was getting dark, and the HP team was heading towards the bus. Maureen, Patty, and Lachelle thanked me before they took off, and the volunteers and I broke down all the fly rods to end the day.  We all stood around as we shared success stories of the evening that were filled with smiles and laughter. I can only hope the HP team is doing the same thing right this moment.