Skip to content
Scuttle-butt of the extraordinary gulper fishing on Hebgen Lake was spreading like wild fire, and it was only a matter of time before Terry Kowallis and I were going to find ourselves back in West Yellowstone. The seven hour drive flew by quickly with the delightful conversations we had about how fantastic the fishing was going to be, and after a good night’s sleep we found ourselves at the boat ramp into beautiful Hebgen Lake. 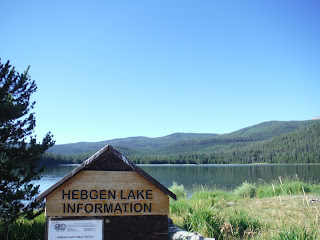 Small rain drop disturbances could easily be seen from the shore… only it wasn’t raining.
“I can see them feeding out there, Terry!” I said with wide eyes and a smile. Although there were a few fish rising, it was obvious that the hatch wasn’t on yet.
“Why don’t you get in the front of the boat first.” Terry insisted, and I didn’t wait for him to change his mind.
“Wait…” I said, turning back to Terry, who was now rowing, “…You put me up here first so I could use up my turn, and when the hatch starts it will be your turn”.
“Too late, I’m already rowing!” He said quickly with a sinister smile. 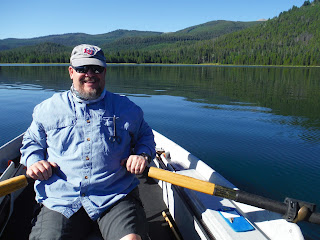 We could see a few fish gulping here and there, but nothing to get overly excited about. A few would be rising off in the distance, then stop once Terry rowed me over within casting distance. 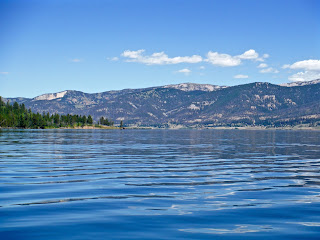 “Would you like me to row a little bit?” I asked, after I had been at the front of the boat for a while.
“Naaa” Terry said, “But I will cast my sinking line from here”. The fishing had been slow, so Terry pulled out his fly rod with his sinking line to give that a shot. After a few casts, he brought out his depth finder, which he held in the water with his feet.
“You know, Terry, with all the fancy gear you have in your boat, it’s a shame the holder for your depth finder is so old and tattered.”
“I can’t afford anything better than this.” He laughed. 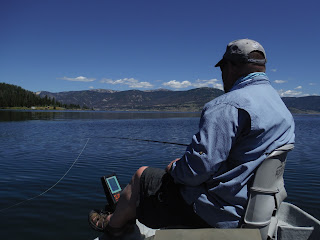 We had arrived at the lake early, and maybe a little too early for the callibaetis hatch. There had been nothing to cast to for a while now, so I joined Terry by switching to a sinking fly set-up.
“There’s one!” Terry yelled, lifting his fly rod.
“It’s about time one of us caught a fish.” I said, as Terry started clawing for the net near his feet. 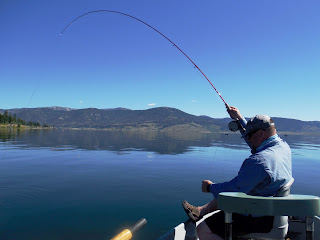 “I got it, Terry.” I said, grabbing the net. Terry’s old-school Hardy reel sounded like a deer in the rut as the fish pulled line from it. Though the fish was kicking hard, it was getting tired quickly. I had the net ready, and could see the fish just under the water.
“Here he comes!” Terry said with a strain, as he stretched both if his hand over his head, as if performing the tree yoga pose with a fly rod and both feet planted. Whatever he was doing, it worked. The fish’s head came up and out of the water, and I was there to scoop it up.
“Let’s get a picture.” I said, before Terry dumped the fish out of the net.
“Okay…” Terry said, and held up his fish. 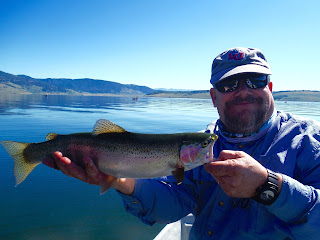 “You’re so photogenic!” I told Terry, as he let his fish go.
“The camera can’t catch beauty like mine.”
“That’s right!” I said back, and we went back to fishing. 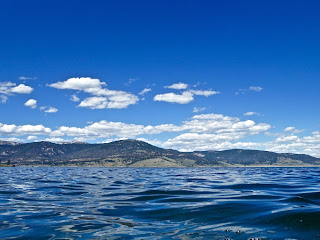 We casted and counted down to 10, 15, 20 and applied every kind of retrieve we could think of; nothing was interested.  Terry’s first fish was the last we had seen in a few hour’s time, and our initial excitement was slowly fading away. With nothing happening, we went back to dry fly fishing, because it seemed like the right thing to do. 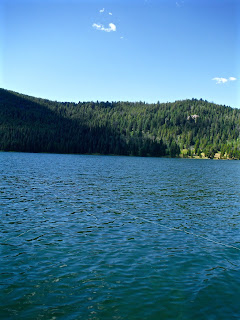 Switching to the dry fly didn’t matter, nor did it change our day. It would just be easier for us to say we didn’t catch a fish while dry fly fishing rather than using the sinking line. We saw the occasional rising fish off in the distance, but nothing we could call a gulping fish. 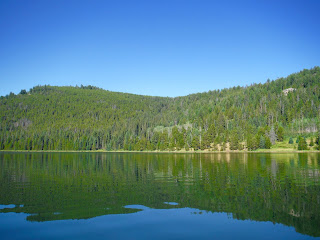 By 5:00 p.m. we were still in denial about the hatch that could start at any time.
“Well…” Terry spoke heavily. After a long moment of silence I knew what he was about to say and it had to be said out loud, “I don’t think it’s going to happen for us today”.
“I’m ready to go whenever you are.” I said quickly, and I wasn’t kidding. Not catching fish while stillwater fishing really beats me down.
“Well, I’ll start rowing us back.” Terry said, and he got behind the oars. As he did I sighted in on an adult damsel fly, because those things were everywhere. I figured if we came across a rising fish, this is what it would be eating, giving me a good opportunity to catch it. Yes, even on the worst days a small sliver of hope looms from within. 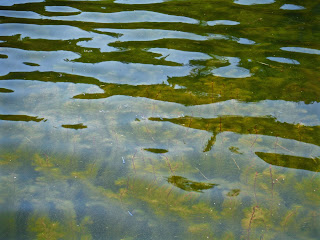 “There!” I yelled.
Before Terry had even made one stroke to head back, I saw a rise and the unmistakable silhouette of a cruising fish just under the surface. Fly line was peeled out in less than a second, and I punched my line backward with a serious haul for substantial power and speed. I wasn’t even thinking about casting, because I didn’t have to. Everything was happening naturally: excess fly line was flying off the deck of the boat, out my rod tip, still soaring behind me for an extra long back cast. When the fly line had shot out as far as it could, I stopped it, only to punch my hand forward while adding a haul to send my fly line rocketing out to my target. It was the perfect cast. Fly line surged forward in a perfect arch, carrying my fly exactly in the path of the feeding fish and laying it out softer than tucking in a newborn. The dark swimming silhouette approached my fly and sipped it like a toddler sipping up a marshmallow in a cup of hot chocolate.  BAM! I set the hook, and the fish bolted to my right, leaping out of the water like a dolphin leading a charter boat. 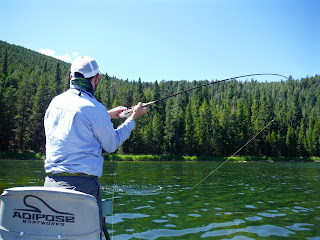 “You got him!” Terry yelled, half surprised.
“Hell yeah!” I responded.
I didn’t take my eyes off the fish. The last thing I wanted to do was celebrate too early and lose it. My line ripped through the water, and Terry was quick behind the oars to point me in the direction the fish was running. And it was running alright. Fly line was being yanked from my reel, and I could the see the 90 feet of fly line was almost gone. This fish was about to take me out into my backing, but it slowed and I took advantage by regaining control of the fight. I brought in line as fast as I could, not letting the fish have any more than it needed. My fish was now visible, and Terry was ready with the net. A good heave with my rod and Terry had the net under the fish, and with a quick scoop the fight was over. 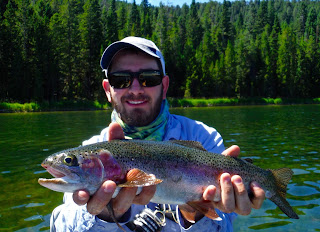 “It feels good to get a fish, Terry!” I said, holding my fish.
“Maybe we should stay out here a few more hours.” He joked, as I slipped my fish back into the water.

We didn’t stay another hour, but we did take our time getting back to the boat ramp. After a conversation with a local, we decided that we may want to look for new water to fish tomorrow. A quick phone call to a Livingston fly shop suggested fishing Yellowstone River. “There are a lot of fish being caught on the birdie stretch,” they said, and that lit a fire under Terry.
“Were going to Livingston tonight!” He said with all kinds of excitement.
“I’m good with that; the terrestrial fishing should be great.”
“This makes me feel young again.” He said, “Way back, we used to hop around from mountain to mountain during the ski year. We would call all the resorts and find out where the best snow was, and go! Just like that!”
Terry was beaming with all kinds of excitement, and he slipped his buff over his head to look cool.
“I’m feeling young!” He yelled, and smiled like he was up to something malicious. 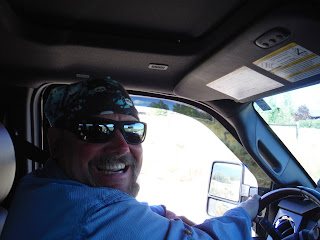 The travel through the park was a bad idea. The construction up to the north entrance was terrible, with one way roads and delays. The time to drive up is normal two and a half hours through or around the park, and today it took us over four hours.
“I think on the way back we will go around the park.” Terry said, as we were stuck in traffic, again.
“I agree, but look at the full moon.” I said.
“Yeah!” Terry said looking in the distance. 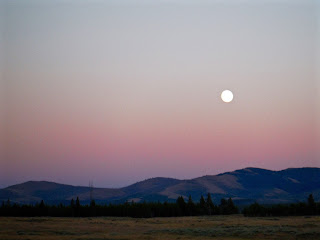 “You know what this means?” I asked.
“What?”
“We have a built-in excuse for not doing well this fishing trip.”
“Do you believe that the full moon makes fishing tough?”
“After today… Yes…” I said, turning to Terry, “I mean, it couldn’t be us!”
“Yeah!” Terry agreed, “but the Yellowstone is going to be great for us tomorrow!”
“Yes it is!”I said, and we arrived in Livingston later than expected, but ready for what tomorrow would bring.

1 thought on “A Great Year to Fish Hebgen Lake”