Skip to content
When you hike a lot in the McCall back country, you discover new things that no one talks about. A few weeks back while on a hike, I noticed a sign that said “trophy trout lake regulations” and knew I had to do some further investigating. It wasn’t long before I talked my wife Gracy into hiking up to this specific lake. Gracy was excited to go, not just because our friend, Callie, was going, but we were also bringing our little dog, Kiwi. 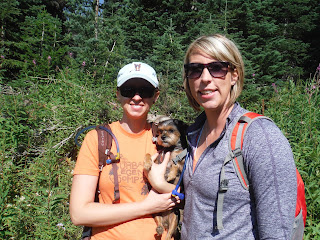 “Oh my God, look at Kiwi go!” Callie said, after we had started our hike and Kiwi bolted to the front of the pack to lead the way.
“She actually does really well on these shorter hikes.” Gracy added, speaking proudly of her pup as we hiked on. 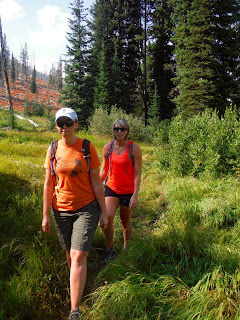 “Looks like the huckleberries in this region are ripe.” I said, as we started hiking up the steeper part of the trail.
“How can you tell?” Callie asked, not having seen a huckleberry bush on our current path.
“The purple poop on the rocks gave it away.” I said.
“Is that what that is?” Callie asked.
“No it’s not, he’s messing with you.” Gracy chimed in, playing her part as the defiant wife.
“What is it then?” I asked Gracy, knowing I was right.
“Well…” Gracy started saying, but then stopped to think about it. “It’s a smashed huckleberry. Someone must have stepped on a huckleberry and smashed it on the rock.” Gracy explain, as if the answer was obvious.
“So your telling me that someone has been stepping on all these huckleberries on all these rocks?” I asked, with my eyebrow cocked.
“I’m going with the poop idea.” Callie said quickly.
“Well… yeah, but where did you hear that from?” Gracy asked me.
“Mike McLean.” I said, making sure to add emphasis in every syllable of his name.
“Well if Mike said it…” Gracy said, smirking at me, as Callie stopped to look at the purple poop more closely. 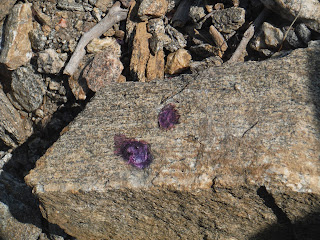 We had reached the highest point of our climb, and could see the scar marks of the 1994 fire. All the green and orange foliage that grew below the tall gray pole-pines added a nice splash of color to the scenery. After a quick break to take in the view, we started on our descent to the lake. 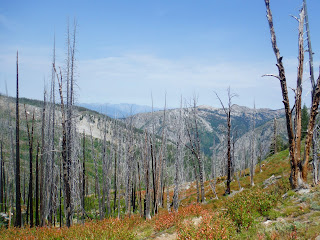 “Well, look at this… huckleberries!” I said in Gracy’s direction after I spotted a bush fully loaded with ripe berries.
“Whoa, good find, E.” Callie said.
“Want to pick some?” I asked Gracy, who already had her pack off and was digging through it for a container.
“Heck yeah.” Gracy said, turning Kiwi’s water dish inside out. Together the three of us started picking huckleberries,with Gracy and Callie putting them in their own containers and me stuffing mine into my mouth. 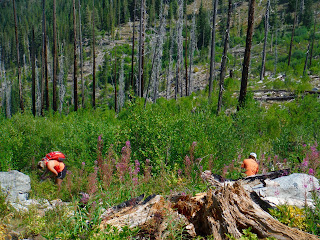 “Let’s see what you got there, C.” I asked Callie after we had been picking for a while.
“I got a bunch of good ones.” She said happily.
“How about you over there?” I said to Gracy, who was using both of her hands to pick berries and place them in Kiwi’s water dish.
“There is a bunch over here.” She said back, showing me the pile she had accumulated.
“Check this out?” Callie said, showing me the handful she had as well.
“Have you tried one?” I asked her.
“Heck yeah, they’re good. I have never had them off the bush before.”
“Geez, Callie, get out more.” I said.
“I know!” She agreed. 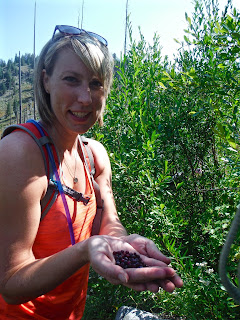 After I was done picking berries, I sat back on a large rock and had a sandwich.  Kiwi instantly became interested in me, but there was no way I was going to share this sandwich.
“How’s your $11.00 sandwich?” Gracy asked.
“Delicious!”
“It better be!”
“You spent $11.00 on that sandwich?” Callie asked with surprise.
“That’s what happens when you leave Erik alone at the Whole Foods deli.” Gracy said.  Both Gracy and Callie looked over at me, and when they did, I was sure to take a huge bite of my sandwich that even a hippo would be proud of. 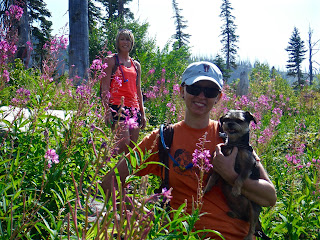 My sandwich was huge, so I only ate half of it. By the time I packed the rest of it away, both Gracy and Callie were ready to continue the hike to the lake, which was only a few yards away. We stopped at the water’s edge so the girls could polish off their huckleberries, as I slapped the fly rod together. 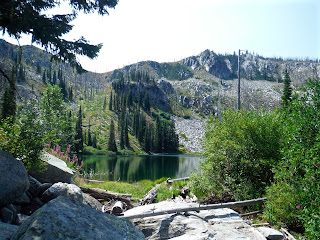 “Don’t forget to save a handful of those huckleberries to smash on the rocks on the way out.” I said, ever so charmingly.
“You!” Gracy scolded, pointing her finger at me as a joke as Callie laughed it off.
“Well, I’m out-a-here.” I said.
“Wait! You are already going to fish?” Callie asked.
“Yeah…” I said, as if it were obvious.
“I want to fish with you.” Callie said, so I stayed behind to help rig up a fly rod for her. There were fish rising within casting distance, so I had time to teach her how to roll cast and she picked up on it fast. 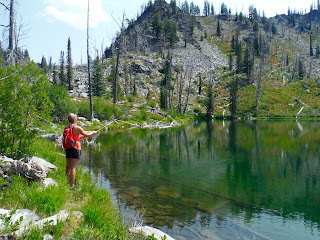 For a little while there was no sign of a fish nearby, and even the few rises out in the middle of the lake were minuscule at best. I began to walk further away from our stopping point, when a fish rose in casting distance back where Callie was standing.
“A fish just rose over here.” Callie said, but I was already on the move, teetering around skinny elbows of grass that provided a small path around bushes near the edge of the lake. Callie flicked her fly out, but it was far from the path of the fish. Without hesitation, I bolted my line out to the fish, and over Callie’s line that was still on the water. It was a cocky move, but the window of opportunity to catch the fish was very small, and there was no time to waste. Like clockwork, the fish swam over and ate my fly. 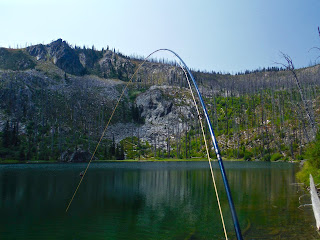 “You got it!” Callie yelled.
“Sorry I casted over your line.” I said back.
“I don’t care, I just wanted to see you catch that fish.” She said back quickly, and snapped a picture of my fish as I brought it in. 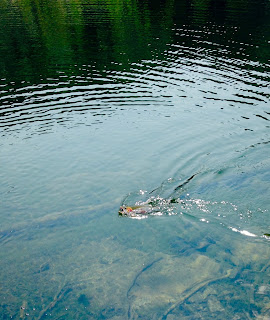 The cutthroat trout shook off before I could get it in my hands, but the size of it was nowhere near trophy size…so no big deal. 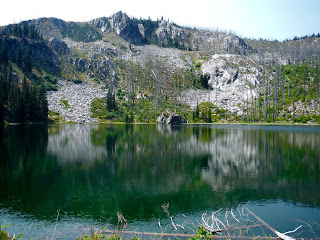 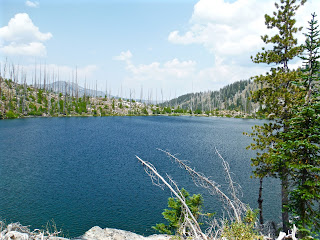 After a long while with no dry fly activity, I switched over to a sinking tip line with a black leech fly attached.  I casted my line out, and counted to ten before I started striping my line back in. My fly was nearly in when a fish bolted from under a rock, and ate it. All I saw was a flash, and felt the weight of a fish at the end of my rod. The fish immediately started taking line as it bolted towards deeper water. The fish tired quickly, and when I brought it in I was surprised to see it was a brook trout. 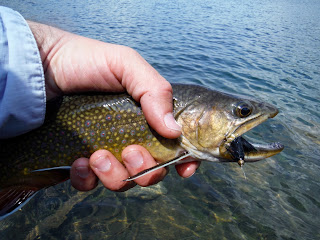 Though this brook trout was no trophy, it was the biggest brook trout I have ever caught; not that I had much to compare to, with the prior one tipping out at seven inches. I dipped the trout back into the water, and it didn’t hesitate to scramble away to freedom. 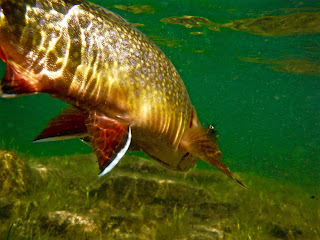 After a few more casts I continued my way around the lake and pitched my fly in, and around, any object in the water.  Coming up empty handed was a bit discouraging, so I pressed on and through a thick portion of bushes without getting my fly line caught once in its grabby branches. Not a single tangle through that mess made me happy, and I was even more happy when I casted out my line and got a hit. 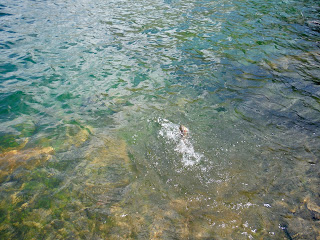 The fish was quick to take, and just as quick to shake the hook off. I could tell by its colors that it was a brook trout, and a small one at that.  Still, it would have been nice to land the last fish of the day, and I knew I needed to get back to where Gracy and Callie were. To keep myself from making another cast I clipped off my fly, reeled in my line, and swiftly returned, running into Kiwi first.
“Kiwi, are you ready to go home?” I asked her. She looked at me, slightly lifted her ears ,and gave me three wags of her little tail; in Kiwi language this meant “yes”. 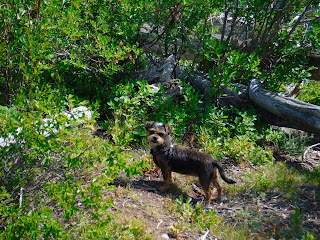 The hike back wasn’t bad at all, if you were Kiwi. We picked her up on all the steep embankments, and she got treats when she minded. And when a treat is involved, she always minds. The nice thing about the end of the hike was a small cooler we had back at the vehicle with a few treats of our own which we happily drank on the way back home. 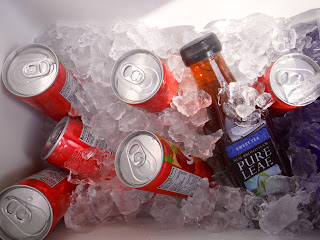 When we arrived back in Boise I was a little hungry, and that’s when I remembered my sandwich. Prior to driving back home, I packed it in the cooler so that the ice would keep it cool for later. When our packs were back in the house, I went out to grab my sandwich and was mortified. In the bag I had, obviously not completely sealed, was about two inches of water, fully submerging my gourmet sandwich.
“Damn it! No, no!” I yelled.
“What’s the matter?” Gracy asked, peaking her head into the garage.
“It’s my sandwich!” I wined, “there’s water in the bag, and it’s ruined!”.
“Well next time you will learn to be more careful.” She snapped, with no hint of consideration in her voice.
“YOU DON’T EVEN CARE!” I yelled, and with all my might I slammed my sandwich on the concrete floor. The water inside the bag shot everywhere, along with a few slivers of salami and roasted red peppers, covering the ground like confetti.
“Feel better now?” Gracy asked, sternly.
“NO!” I snapped.
“Well, you are not coming in until you clean up the mess you made.” She said, and shut the door behind her.
I stood there alone, looking at what had become of the rest of my $11.00 sandwich. Slowly… and reluctantly… I started to clean it up.

2 thoughts on “A Trophy Trout Lake”