Skip to content
We woke up in Livingston, Montana, to a cool, crispy morning that suggested great fishing. We stopped at the very fly shop that gave us the information about our fishing location to pick up some flies before hitting the river. 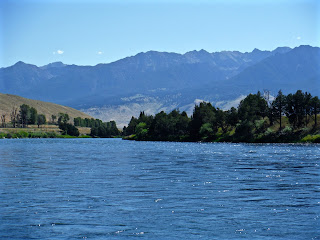 “Terry, if we have half as good of a day as Mark and I had a month ago…we will still have a great day.” I said, as we unhooked the boat to launch.
“Well the fly shop seemed to have lots of good things to say about this float, so I’m expecting a good day. And, if it’s great, we may stay another night.” Terry said before dropping the boat in the water. 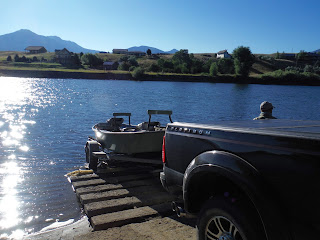 “You are up first.” I said, after Terry parked the truck and was ready to get in the boat.
“Oh yeah?!” Terry said, hopping in the front of the boat. We could see rising fish, but judging by the small splashy rises, they were small fish. It was still a good sign, and Terry didn’t waste any time fishing for them.
“There’s one!” he said, and brought in one of the little risers. 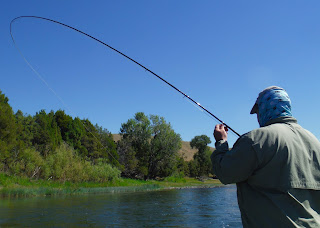 “Awe, it’s a white fish.” Terry sighed.
“Oh, I need to get a picture of that!” I said happily.
“You better not!”
“The same thing happened last time; both Mark and I each caught a white fish first before hooking into some trout.  It’s a good sign.” I said.
“I don’t care, I still don’t want a picture of this fish.” Terry said, but I quickly snapped one before he accidentally dropped it. 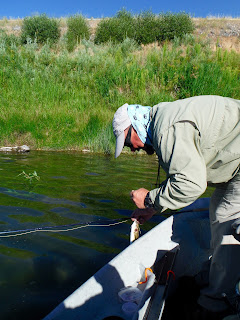 Terry continued fishing and catching the native mountain white fish. The funny thing about every one of these white fish was that they were whacking our flies off the surface. In my home waters it is quite the surprise to find a rising white fish, and here they are everywhere taking dry flies.  Despite the occasional white fish, fishing itself was slow. 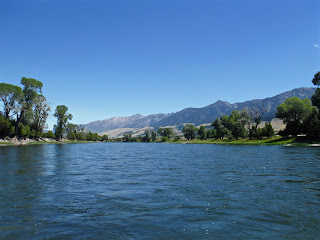 It was my turn up at the front of the boat, and I blasted my fly to the bank in search of a trout.  After a while a fish hooked and, you guessed it, it was a white fish. 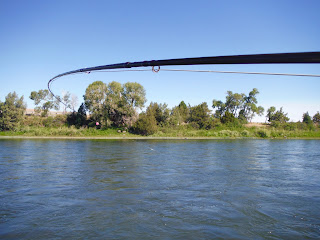 Unhooking a white fish can be a challenge in itself. The little flicks with its tail and slender body make the fish hard to hold onto, and they never keep still. Every time I got my forceps close to the hook to grab it and pull it out, the fish would flop itself over and over and over.
“Hold still!” I yelled at the fish.  Terry hadn’t dropped the anchor so I was losing valuable fishing opportunities as this little fish did everything it could to make releasing it as difficult as possible. 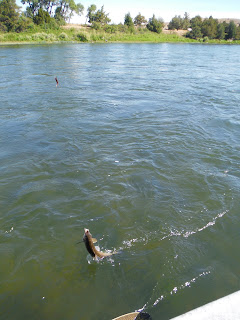 It was finally off and I was back to fishing. With the amount of time it was taking to unhook these white fish, my turn at the front of the boat was almost up. For a long while my fly was not being touched, and again, the last thing I wanted was a white fish. My fly was near the bank, and was drifting under a pine tree when a slow rising fish gulped in my fly. The color of the fish and the wide mouth that took it in was unmistakable: I had finally hooked into a cutthroat trout. 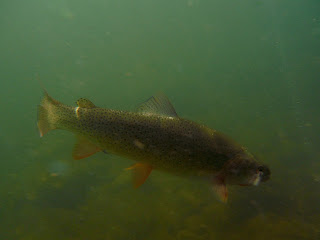 The fight of the fish was noticeably different from a white fish, and the flashes of bronze lit up our spirits. Terry handed me the net and I scooped up the little Yellowstone cutthroat trout with one easy scoop.
“It’s nice to see you.” I told the fish, and quickly unhooked my fly from it with ease.
“I think that means it’s my turn.” Terry said as I released my fish.
“You better get a trout, Terry.” I said.
“Oh, I’ll try.” he said back, stepping to the front of the boat. 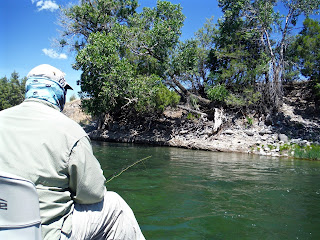 Terry had his fly into the water before I had even raised the anchor, but nothing was taking. We had switched spots after some time on the water, both of us coming up empty handed. We floated for a while longer before Terry spoke up.
“This is going to be a great steel-headin’ year.” Terry said, watching his untouched hopper floating near the bank.
“What makes you say that?” I asked.
“Because fishing sucks today.” He said, and he was right; this was nothing close to the experience Mark and I had, and it was bringing us down.
“I’m thinkin’ the time I’m spending not catching fish today will be made up to me during steel-headin’.” Terry figured.  Luck for us, in-between the lull we were experiencing, we saw a couple of bald eagles perched in a tree just above us. 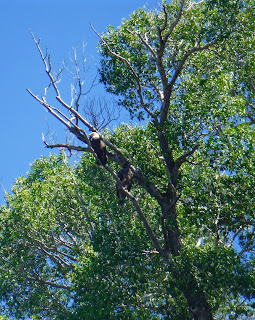 “One of them is going to swoop down and pick up a fish to show us how it’s done.” Terry said, casting his hopper.
“You are still fishing with the hopper huh?” I asked, noticing he wasn’t getting any looks on it for a few hours now.
“I’m going to force feed them this thing until one eats it!” He said, making another cast. Sadly, no fish were interested in his hopper, and we had reached a slower flowing portion of the river that forced me to row downstream.
“Ga, how bad does fishing have to be for us to want to row faster down the river?” Terry asked. 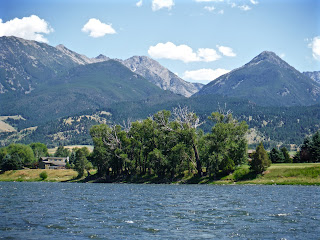 “OH!” Terry yelled, cutting through the sound of the flowing river.
“Did you have one on?” I asked, not seeing him fighting a fish.
“I just had a refusal!” He said happily, and after realizing how excited he got over a refusal, he laughed and said, “Fishing sucks today”.
I looked downstream and saw a fish rise about twenty feet off the bank.
“Did you see that rise?” I asked, and Terry did.  He casted his fly directly in front of the boat, and watched as the fly drifted towards the small ring that was created by a fish.
“Got em’!” Terry yelled, “And it’s a rainbow!”
Terry’s fish jumped clean out of the water and landed with a splash. His fish started running upstream, and after handing Terry the net, I kicked the boat around for him to be facing the fish, which also meant I had my back facing downstream. I twisted around to keep an eye on what we were floating into, and missed his fish bolting back downstream and under the boat.
“Ahhhh!” Terry grunted, as his rod doubled over with the tip getting dangerously close to the rocky river bed. I quickly dipped the oars into the water and kicked the boat 180 degrees so that we were back to facing the correct way.  Terry reached down to the fish, and almost had it.
“Row forward!” He yelled, and I didn’t hesitate. The extra boost towards the fish was enough for Terry to scoop up his first trout of the day. 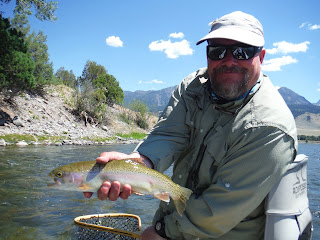 A ten mile stretch of river can take all day to float down, and with the kind of catching we were experiencing today it felt like ten miles. The few trout we had caught were few and far between, and we were looking forward to the end of this float. On top of the slow day of fishing, the heat was draining us. 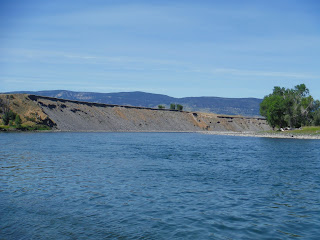 With nothing happening for us, I switched my rig to a hopper dropper outfit, hoping that would change my luck. I was casting my rig close to the bank, and almost getting my dropper caught in some bushed in the process. A relatively small rock created a nice pocket that a fish could be chilling in, so I made a cast that allowed my hopper dropper setup to drift through it nicely.  The hopper busted under, and I quickly set the hook.  The first jolt from my fly rod indicated it was a nice fish, and then I saw it.
“Brown trout!” I yelled to Terry, “And it’s huge!”
Terry reacted quickly behind the oars, and there was no place in sight where we could anchor up.  We had hit some shallow swift current, which made it even harder for Terry to slow down the boat. Each stroke with the oars scraped the shallow river bed, but he did his best to keep me in control of the fish.
Every kick and head shake that came from my fish was powerful, and if I didn’t bring this fish in fast, I was going to lose it.  The trout made another run, ripping line from my reel.
“Terry, this fish his hot!” I said, as the drag on my reel screamed to life.
“Well, don’t lose em’!” Terry answered back. I could tell by the tone of his voice that he was excited to see another trout being caught.  The fish was in close now. I jabbed the net under the fish, and lifted it up and out of the water. The weight of the fish almost took me off balance, but I quickly recovered and kneeled down to look at my fish while keeping it dunked in the water.
“That’s a nice fish.” Terry said, and I unhooked the fly from its mouth.
“That’s the fish of the week!” I said happily, and held it up for a picture. 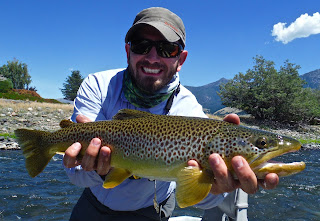 The day ended shortly after the brown trout, and after a really quick decision not to stay another night, we headed back to Lois’s cabin in West Yellowstone. We arrived late in the afternoon, and at first sight there was a relieving feeling like we were home. 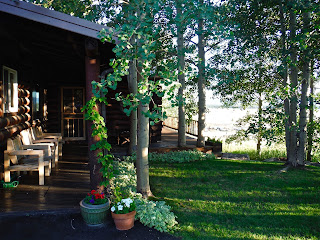 A good night’s rest would definitely helped us recuperate from the long float. Our hight expectations for this trip had beat us down hard, but we still had hopes for the next day.
“We will have a good day tomorrow.” Terry said, as we pulled up to the cabin.
“Oh yeah?” I asked.
“Yep! Because we have zero expectations for tomorrow.” Terry said with a chuckle.
“Here’s to zero expectations!” I said, and Terry and I did a quick fist bump to end the day.

3 thoughts on “Back on the Yellowstone River”