Skip to content
It was my father-in-law, Dan, who first introduced me to fly fishing at a family reunion almost eight years ago. He was fishing by himself, and when he returned I asked him about the sport. He explained it to me the best way he could, then at the end he said, “but don’t quote me on any of this because I really don’t know what I’m doing.”  After a year into the sport, I discovered he was absolutely right. Despite his lack of knowledge it’s a shame we only get to fish with each other once every couple years, so it was nice that Gracy okayed a day for me to take him out to the Gallatin River in the park. 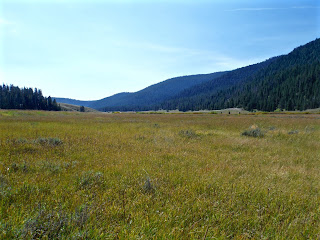 I had yet to fish the small part of the Gallatin that flanks Highway 191 within the borders of the park, so I wasn’t sure what to expect. The nice thing about this particular section is that it was only about 20 minutes away from where we were staying, leaving that much more time for fishing. 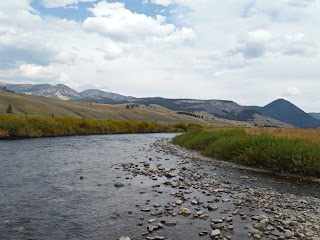 Terrestrials were recommended to us, but after a long while of fishing with no hint of a fish, we found some water that was a little deeper and cooler. There was a nice run we had approached, and after some dry fly attempts turning up empty, I switched Dan over to a nymph. I was in the process of clipping my fly off, when I heard Dan yelling.
“Whoa! There we go! There we go!” He yelled, and I looked up to see he was fighting a fish. 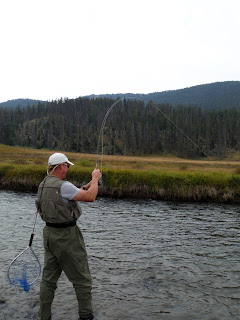 I quickly unhooked my net to help out, but Dan had his own net in his hand and was scooping up his fish.
“It’s a white fish.” I said, “Would you like a picture with it?”
“Hell no.” He said quickly, and dumped the fish back into the water unceremoniously.
“That was a nice white fish. Most of the fish here are ten to fourteen inches, at best.”
“Who said that?” He questioned.
“The guys at Blue Fly.” I said.
“Well, I’ll get a picture of the next one.” He said, but with the day we were having it was unclear if there would be a next one. 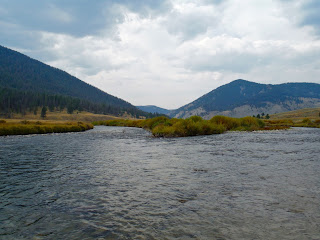 I thought about nymphing for a while, then remembered my experience with the mouse the previous day. I had slipped one in my pocket that morning, just in case, and decided to tie it on. I shot the mouse pattern so close to the bank that it skimmed the overhanging grass before it splat down in the river. CA-BLAM! A big brown trout came up and slapped it hard, but I did not connect with it. I slapped my fly back down, but nothing came back up.  I knew there was a fish hiding in that undercut bank, so I took the mouse off and tied on a streamer. The streamer slapped the water hard when it landed above the fish’s home, and when it drifted down to its home I stripped the streamer back.  WAM! It was like I had hooked into a dropping anchor, and I could see the fish doing its best to run in the gin-clear water. 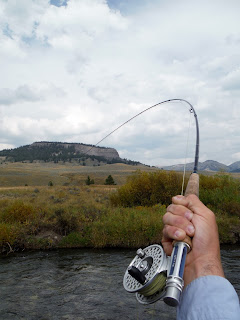 “DAN! DAN!” I yelled fighting the fish, but Dan was too far downstream to hear me.  The fish was not tiring any time soon, and I did everything I could to maintain control with my 4-w.t. fly rod. The fish was finally starting to tire, but the fight was far from over. The fish would come within netting range, then kick away fast when it spotted the net. Unless you are ready to let the fish run if it wants to, this is the time when they are most likely to break off. That has happened to me far too many times in the past, so when the fish darted away I was ready.
Whether he heard or saw me fight a fish, Dan was on his way over , but by then the fish was tired enough to come in.
“I thought you said they only get 14 inches?” Dan said, looking at the brown trout in my net.
“This fish is a monster in this river, and I will probably not get another one here that is this big again.” I said, and held up the fish for a picture. 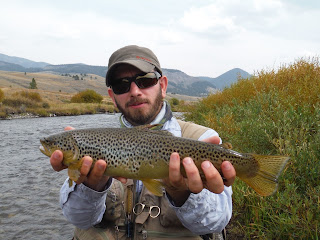 I dipped the fish back into the water, and it stayed with me for a little bit before kicking away. 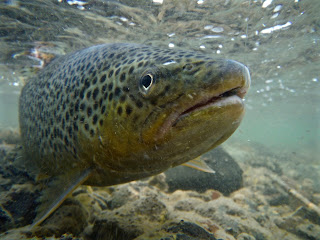 I stood up tall with triumph, as I watched the fish disappear into the river.
“Fish the undercut banks…” I said, pointing them out, “… the fish hide there to protect themselves from predators, and will come out to eat.”
“Sounds good.” Dan said, and we split up to work different banks of the river. 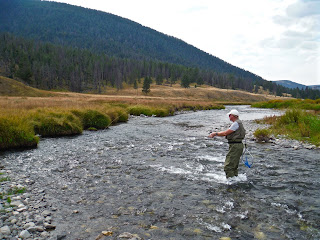 I tied my mouse pattern back on again, and slammed it down on the banks in search of another big fish. The chances were slim to nil, but you never know. When mouse-ing, I tend to never throw in the same place twice. The thought behind that is if a fish is willing to eat the mouse, it will decide to eat it on its first opportunity. With this thought in mind I walked downstream, casting my mouse to different spots each time. Sometimes I would cast right on the bank and pull my mouse into the river like it had decided to take a swim; that’s when a fish, bigger than the brown trout I had just caught, materialized out of nowhere, gunning for my mouse. It all happened in a second, and after one swipe it went back into hiding.
“Dan! Dan!” I called out, but got no response. I wanted him to have the opportunity to hook this fish, so I went looking for him. After a feeble attempt to find him, I went back to where the big fish was hiding. There was a very slim chance it would come after my mouse again, so I tied on my streamer and launched it in the home of the fish. My black streamer came racing out of the undercut bank with the fish right behind it. BUMP! I felt it hit, but I knew better than to set the hook now. BUMP! Again the fish hit my fly, but there was no solid connection.  The fly was getting dangerously close to me, and if this fish saw me it would dart away and not come back out. “BOOM!” The fish moved in for the kill and nailed my fly only feet away from me. 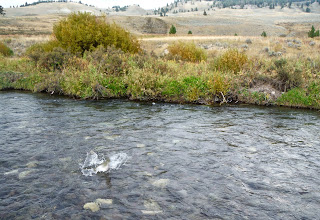 The fish immediately knew it had done something wrong, and bolted back to its home. There was no stopping this fish. My reel screamed to life as the fish went deep under the bank for safety. I kept the line as tight as I dared to pull it back out, and continued the fight where there was less of a chance of getting a snag. The fish tired more quickly that the last, and so I held it at bay before I netted it. 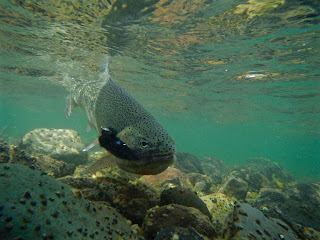 Dan had showed up to get a picture of me and my prize fish.
“This one is bigger than the last one!” He said.
“I honestly can’t believe it.” I said with a smile.
“I tried calling for you and walked over to find you so you could try catching this fish.” I said, as I tried to get ahold of my fish.
“Well, I would have just screwed it up.” He said.
“That’s true…” I said with a smile, and held up my monster cutthroat trout. 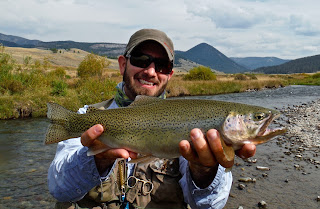 I placed it back into the water, and held its tail before it kicked away and back into its home. 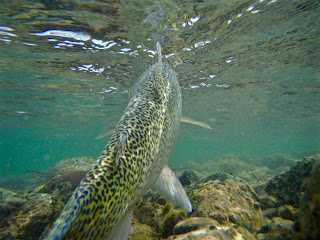 It was hard to believe we had already spent the whole day fishing on the Gallatin, but it was time to head back. 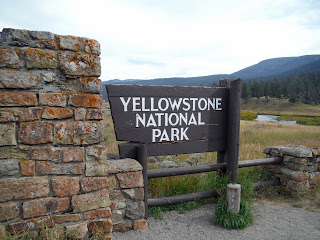 We did run into some dry fly activity, which kept us on the water a bit longer. Dan hooked into a few cutthroat trout, but lost them in the fight. The hatch didn’t last long, so we continued back to the car. I could have easily stayed out until dark, but I knew if I did there would be hell to pay. This is suppose to be a family trip, I reminded myself, and after a quick calculation I realized I had just kidnapped my father-in-law for eight hours to do nothing but fish… There was no qualms about it, there will be hell to pay.