Skip to content
There’s nothing like waking up to the cool crisp air of Montana, especially if it’s paired with fly fishing. This particular trip to West Yellowstone was not a fly fishing trip, however. The previous night I drove up with my wife, Gracy, and she was sure to let me know that. So if I wanted to get away it was going have to be early in the morning, and when I woke up I bolted out before anyone could stop me. 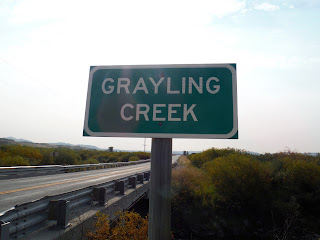 The small creek that runs near Lois’s cabin is Grayling Creek, and after passing by it for the past few years it was time to check it out. 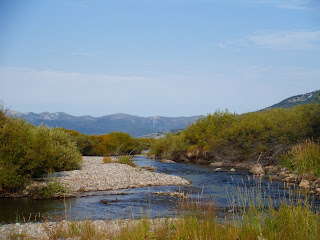 With my bear spray on my hip and a bell to ward off evil spirits, I made my way down to the creek. There were deep holes that looked promising, but nothing was hitting my fly when it plopped down. I made my way upstream, slapping my fly in every spot that looked that looked like it could hold a fish. 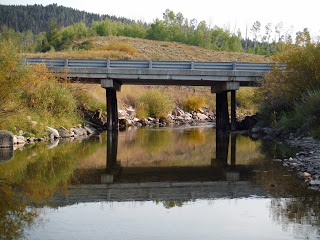 Every once in a while I would look over my shoulder while flicking my bell to alert anything that may be nearby, and when nothing popped up I continued upstream. Being cautious of bears is foreign to me, because on my home rivers I don’t have to worry about waking a sleeping grizzly. So with every plop of my fly I would glanced around before taking my next cast; that was until I came to a barbed-wire fence across the river. I don’t think it is legal for land owners to fence off a river like this, but I didn’t know for sure so I walked back to my car to check out a different part of Grayling Creek. 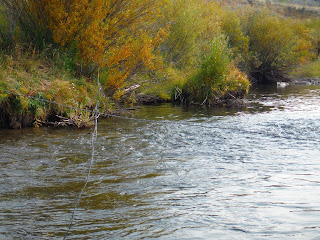 I was bleeding time, and I had yet to catch a fish. I pulled over near another bridge on Grayling Creek that was just outside the boundaries of Yellowstone Park, and it looked promising. The little bell on my hip rang loud as I made my way to the water, and I quickly made my way up until I found a nice pocket of water that looked promising. 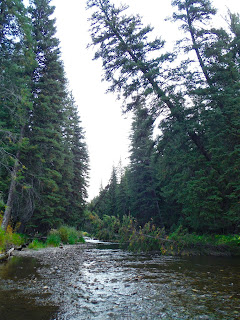 I flicked my fly into the nice blue pool, and a small fish came up and rocketed out of the water. I believe its intention was to eat my fly, but it completely missed the opportunity. I chuckled to myself at the failed attempt and placed my fly back in the same spot to give the fish another chance to eat it. The little fish didn’t disappoint. As soon as my fly hit the water, it came back up and nailed it. I lightly set the hook, and felt the little shaking head of the fish. 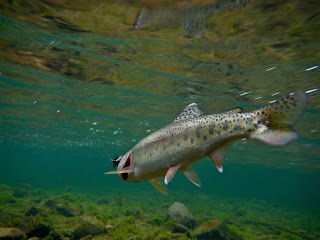 Although it wasn’t much of a fight, I was sure happy to have caught a fish.  I unhooked it, and the little thing bolted so fast that a small cloud of soot was the only thing left behind. I quickly got up, made another cast, and was hooked into an even smaller fish. The rod tip of my 4 weight was wiggling with the fight of the fish, and I held the fish at bay just to feel its fight. Despite its size, it was nice to be hooking into some fish. 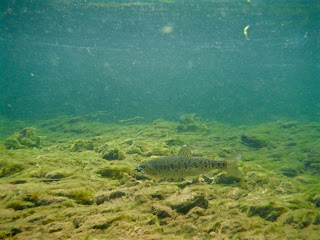 I had found the honey hole, and in just the knick of time. I had caught all the fish that were willing to come up and eat a dry fly, and I knew if I didn’t check out more of the stream I would never forgive myself. 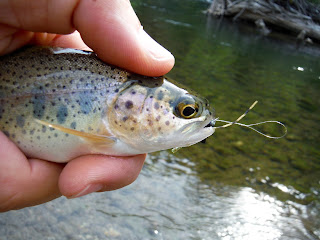 I hooked my fly to the fly rod, and walked up the stream to find a very large tree blocking my way. 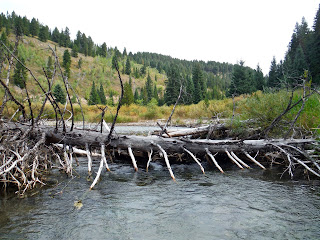 No worries, I’ll just walk around it, I thought, and did so while ringing my bell…just in case. I got back into the water, and unhooked my fly to see if there were any fish tucked in under the overhanging bushes. 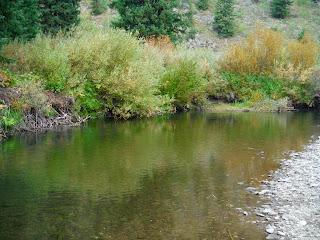 When casting to these bushes I’m not afraid to get my fly caught in the shrub, therefore my fly usually lands about an inch from the bank, which is under the bush itself. I have found that casting this close to the bank can make a big difference on whether or not the fish will take your fly. Just in front of me was another promising spot that looked like it could hold fish, so I casted over to it and my fly landed in the bush. I yanked my fly out which seriously disturbed the bush, but my fly was out.
SPLASH! WACK! SLAM!
“What the hell?!” I yelled.
The water had just erupted no more than three feet away from where I was standing, and I looked over to see a mouse swimming to the bank and a very large fish trying to eat it. 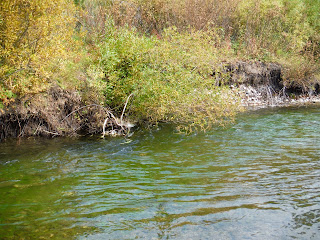 “No way! No way…” I said with amazement. I had never seen a fish attack a mouse before, and so close. I stood there shocked, and looked around to see if anyone else had seen what I just saw, and of course there was no one. The fish had sunk back into its hole, and even after studying the water I couldn’t see where it was lying. That didn’t matter because the fish had already made a huge mistake… It let me know where it was.  I snapped out of the shock of seeing the attack and tied on an old dried up streamer I had stuffed in my vest. Though I could not see the fish, I knew where to throw the streamer.  It hit the water hard and I started stripping back when the fish shot out from under the bush.  The stream was only about ten feet wide, so I could easily see the fish when it took my streamer in its mouth… and I was also able to see the streamer rip out of the fish’s mouth when I set the hook. 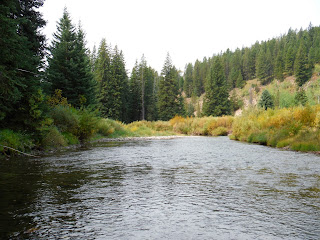 “DAMN IT!” I yelled, knowing full well that I had just missed my opportunity to catch this fish. I spent a lot of time casting back into the fish’s home, but nothing came back out. It had got away, and I was not happy about it.  I kept replaying the moment in my head: what if I set the hook a little later? What if I strip-set the hook? what if, what if, what if?
I finally gave up, and walked back down the the original honey hole I had caught fish from just a bit ago. 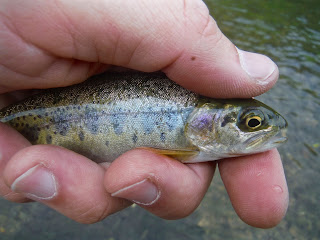 I did catch a few more little fish, and I must say it made me feel better. 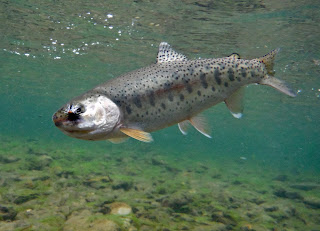 My phone started buzzing just as I was beginning to wonder how long I would get away with staying out here. 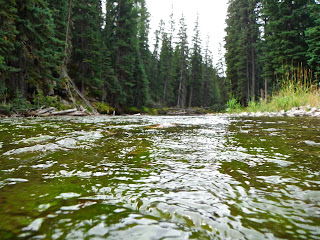 My morning fishing time was over, and it was time to hang out with family… It was going be a long rest of the day.