Skip to content
After accidentally fishing over eight hours yesterday, today was family day. This, of all days, was the hardest for me. We drove the upper loop of the park, and passed several lakes, creeks, rivers and streams that I wasn’t allowed to fly fish. I watched with envy as other anglers stood in those very streams fly fishing, and I sat with my face against the window like a puppy wanting to play outside.
There is just so much more for me to discover in Yellowstone, and I even had a license that covered me for three days… so the real crime would be to not fish today. It was a weak argument, but it worked.  After a long drive, Gracy granted me permission to fish the head waters of the Gibbon River. 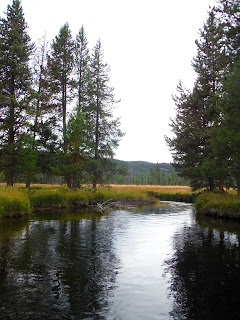 I had my wading gear and fly rod together in a flash, and wasted no time getting to the water. 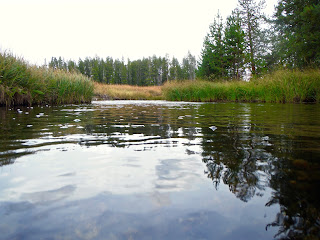 I flicked out my little beetle pattern in the smallest tail out, and a fish came up and ate it. The hit was so faint, that if I didn’t have my eye on the fly, I could have easily mistaken it for a simple riffle in the water, but I didn’t and set the hook on a little brook trout. 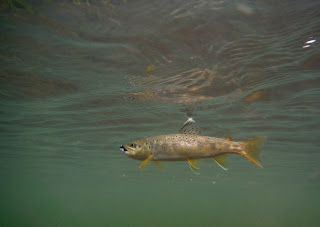 “You got one!” Gracy said happily, and I looked over, surprised to see her and her dad watching me fish.
“Yep, it’s a little brook trout.” I said, and unhooked the fish to cast again. Another small take, and another small brook trout to match. I brought in the second fish of the day, and as it struggled to free itself, I took a deep breath to take in the air of my surroundings. 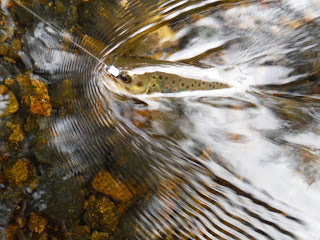 I had the fish right next to me, and after a quick picture it kicked and came unhooked.  The little fish darted away with a little splash in my face, which made me smile.
I continued up to the next little hole that looked like it could hold a few more fish. I carelessly casted my fly over to my target, but a branch behind me caught my fly.
“Damn it.” I said, and sacrificed the fly for lack of time. I quickly tied back on, and with little room for a back cast, I roll casted my fly out and it was immediately hit.
Could this be an eight inch fish, I thought happily as the fight of the fish actually made my rod bend. I brought in the fish, and saw it was bigger than its fellow inhabitants. 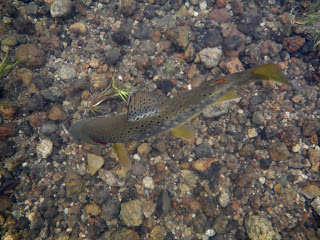 My life wasn’t so bad today, I thought as I released the bigger brook trout back into the water. Just one more, I though as my time was quickly running out. It’s always the last fish that gives you problems, and after a little while I hooked it and brought it in. 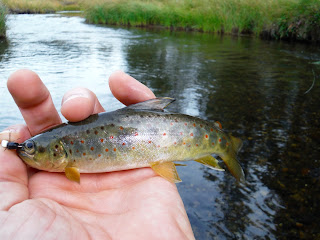 It was obvious I did not want to leave the river, but we had to get back to the cabin to let Kiwi out.  As I stepped out of the river I saw that Dan had his handgun strapped on.
“You got your gun, huh?” I said.
“Yes, sir. That’s just in case you got attacked by a grizzly…” He said quickly, “I’d just shoot ya so you wouldn’t suffer.” 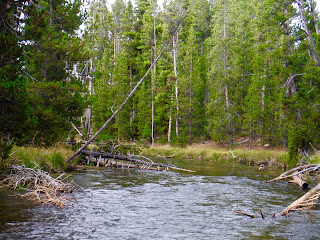 Both Gracy and her dad thought that was just the funniest thing in the world, and to be honest I thought it was funny too. I laughed as I geared down, and just in time. A heavy boom echoed around the mountain, and large raindrops fell hard on the dirt next to me. I packed up my gear and got into the cab of the truck before the rain really started coming down. Large rain drops exploded on the windshield as we drove through the storm, and I sat looking at he water as we drove, thinking: I would still be out there if I could be…

1 thought on “A Few Seconds on the Gibbon, Yellowstone Park Day 3”