Skip to content
My old fraternity brother, Justin Shank, and I have been planning to fly fish with each other for a long time now, and after a few years of mismatched schedules the day had finally come. I figured a nice high mountain lake trip would be in order to avoid some of the crowds on the local streams, but when we pulled into the trailhead parking lot we saw four vehicles already parked there, one of which was a twelve passenger van. 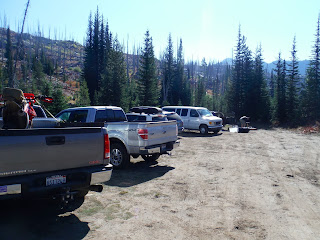 Despite the number of people, today was going be a good day because we had brought our float tubes. Normally I don’t bring my float tube in, because it is big and bulky. However, one of the lakes we were going to fish requires a float tube to get beyond the lily pads that are sure to snag a fly. Not only that, but the effort of carrying a float tube can pay off as far as the number of fish caught for the day. And to make things better, by the time we had our tubes pumped up, the hikers in the twelve passenger van were finished and gone for the day. By the time I had my float tube on my back, another set of hikers had come and gone, so I was certain we might luck out and have the place to ourselves after all. 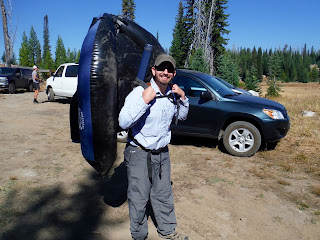 Having the tube on my back was very uncomfortable. The boots and waders were shifting my balance with every step, the straps were digging into my shoulders, and under it all was my smaller back pack that carries all my gear, water, and snacks. Justin was no better off; he also had an awkward solution to carrying his float tube that made for shifty walking.
“It will be worth the extra effort, trust me!” I said, before we started our hike.
“Oh, I’m good to go!” Justin said quickly, excited to catch a fish. 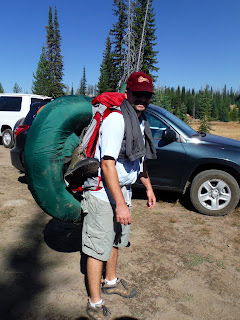 The shifting weight of my boots swinging from side to side caused the strap of my tube to dig more into my shoulders. I shifted the weight of my gear by holding my straps as I walked to help ease the digging. The thought of having the accessibility of the float tube kept my spirits up. 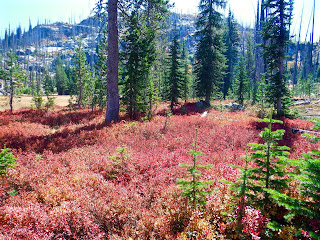 We came to a small creek that we needed to cross, and the only thing we had for a bridge was large unstable rocks. I could see that each rock was shifting under Justin’s feet, so I brought out my camera just in case he lost his balance and fell in. Sadly he did not, so we kept on hiking. 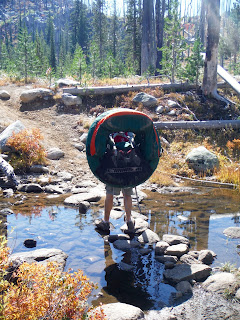 The distance to this lake was short, but the tube on my back made it seem a little further. When we came over the hill and saw our lake the smiles that grew on our faces were bright enough to spook a weary fish, and slipping off the tube made my smile even brighter. 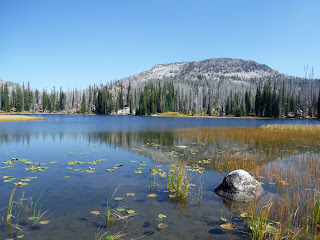 “It’s nice out here.” Justin said, after he slipped his float tube off his back.
“And the fish are rising!” I said, after a quick glance over the lake before I started putting together my fly rod.
“I have never caught a west-slope cutthroat trout.” Justin said.
“Well today is going to be your day!” I said happily.
I had put together my fly rod in record time, and started to get my waders and boots out to put them on. I kicked off one shoe to slip my foot in my waders when I heard the worst sound I could possible hear at that moment. A small hiss was coming from the left side of my float tube, and the color drained from my face.
“Ohhh noooo…” I said, and opened up the tube to check the air bladder. Sure enough, a small split at the seam was spewing air, and the sound reminded me of a dementor’s kiss. Hauling that tube all the way up with my gear digging into my back just to have it fail on me now…left me feeling like I would never be cheerful again. 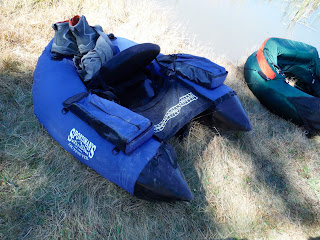 “We will share my float tube.” Justin chimed in to make light of the problem.
“No…” I said gloomily, “…don’t worry about me, I’ll fish along the bank.”
Justin finished putting his waders on, and I handed him his fly rod before he floated away.
“GOD!” I yelled, while looking down at my float tube… and gave it a swift kick before I walked away to fish. 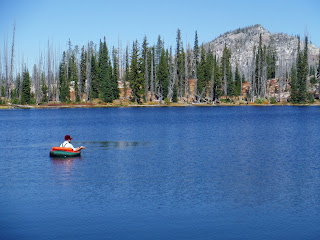 I couldn’t escape the thought of having to haul that damn float tube back to the car, and when my fly got stuck on a lily pad after a cast I got even more mad. I didn’t want to deal with a snagged fly right now, so I pointed the fly rod at the snag, and snapped my fly off.
“Stupid ass float tube.” I said, blaming the flat float tube on my lost fly.
Really… the worst thing about the day was that I was going to make a small video for my dad. I had my Go-Pro ready and had already filmed the first part of our hike to get lots a fun footage for a great video, but no, my float tube had to go out.  I sighed and made another cast out, and a fish took.
“Alright!” I said, as a bit of happiness sprang out of my voice as I brought in my trout. 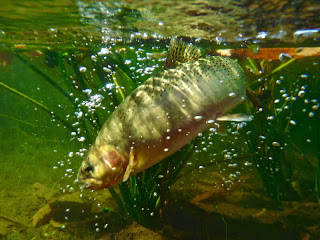 I remembered the Go-Pro and turned it on to get some footage of the fish underwater. Perhaps I could still make a video after all. 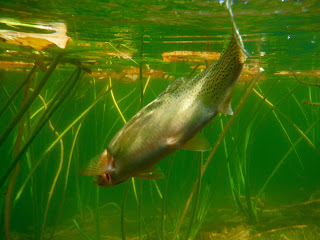 I was looking out at Justin, and I had yet to see him hook a fish.
“How are you doing out there?” I yelled.
“I keep missing them.” He answered back.
“Set your hook a little slower; they don’t take your fly as fast as a rainbow.” I suggested.
Where I was fishing, I had caught a few more fish, and suggested to Justin that he continued fishing it while I hiked around the lake. 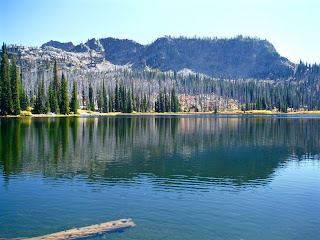 In the distance I could see that Justin was hooking into some fish, and I was also doing well around the edge of the lake. By the time I had walked the entire lake I had plenty of footage for a video and plenty of fish caught.
“Justin. We better get going if we want to fish that other lake.” I yelled out to him.
“I almost don’t want to leave this lake. The fishing has been good.” “We can stay if you want, but you will miss the opportunity to catch a grayling.” I said, like it was no big deal.
“Seriously! You would give up your grayling spot to me?” He asked with surprise.
“It’s the real reason we brought our float tubes.” I said, and Justin kicked his way over to me, we packed on our backs, and headed to the other lake. 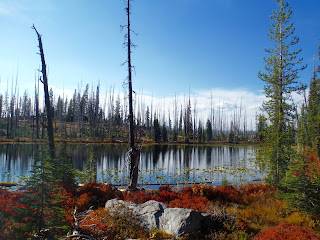 “I can see why we need float tubes.” Justin said, as he looked out into the lake. Surrounding the bank was a fifty-foot border thick with lily pads that would snag any fly that came close.
“That sucks about your tube.” Justin said, after gearing up to get into this.
“You know what…” I said with determination, “I’m getting in it anyway!”
“Seriously?”
“Yeah! There is plenty of air in the tube, and the seat is a big flotation device.” I said, as I put my waders on, and kicked out.

I felt like if I leaned too far forward the tube may dump me out, so I stayed way back on it and everything seems to be okay. Justin had already hooked into his first grayling, so the pressure to get him into one was no longer on my mind.  Right near some lily pads, a grayling came up and ate something off the surface. I flicked my fly over to where it had rose, and waited for it to come back. A small twitch was all I needed and WHAM, the grayling took. 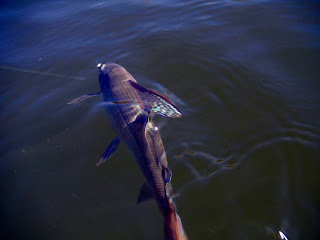 The grayling were kind of small, so they put up very little fight. The blue fin glistened under the water as I held the fish to let it go. As soon as it was ready, it bolted from my hand and out of sight.
“Woah! I got a nice one over here!” Justin’s voice echoed across the glass water as he spoke. I saw that he netted his fish and was kicking over for a picture. 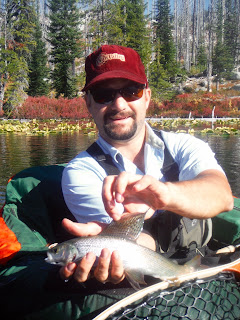 The best part about all of this was that I had my Go-Pro with me.  The grayling would be an added bonus for my dad when watching the video. I was sure to get as much footage as I could before I had caught and released my last grayling. 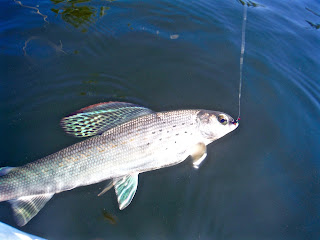 We had stayed a little longer than expected, and it was time to head back.  Justin did his best to stall on his way off the lake, but eventually made it out. When we arrived back at the trailhead, my car was the only one left in the parking lot. 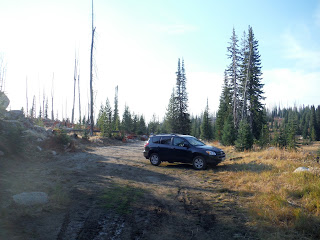 “I still can’t believe my float tube went out on me after I had packed it in all that way.”  I said, stuffing it back into the car.
“It ended up working for you in the end.” He reminded me.
“Yeah, and I still got some footage for a video.” I said.
“You will have to let me know when it’s available to watch.” Justin said.
“Yeah, I’ll let you know.” I said, and we got into the car and drove home.

Not having a working float tube altered what I had originally planned for the video, but what I came up with was still fun. You can’t even tell I am upset about not having my float tube!

1 thought on “The Float Tube Hike”