Skip to content
The wind cut through the trees like an icy dagger, piercing us right to the bone, as Bert Williams and I put together our fly rods to fish the banks of the alpine lake.
“I may actually need my jacket today.” I said, as I dug for the fleece jacket in my backpack. 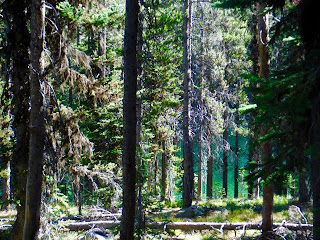 “It did get cooler after we stopped hiking.” Bert observed, as he lengthened the sleeves on his shirt.
“What fly are you tying on?” He asked.
“Little green beetle.”
“I think I have one of those.” Bert said, and after tying one on he found a rock to cast from. 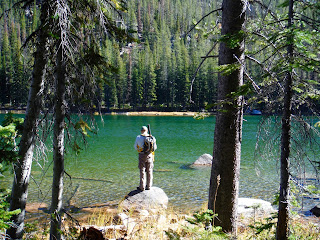 There were no fish in sight, which is not a good sign when the water is as clear as it was that day; however, I have been fooled by this before. The best thing to do in these situations is to cast your fly out to the darker shaded water, because that indicates there is some kind of drop-off where a fish could feel better protected by its camouflage. 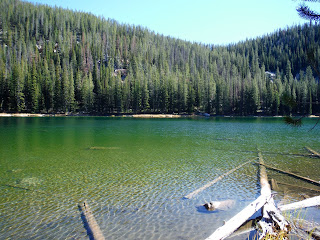 As soon as my beetle smacked down, a small shadow sprang to life. The dark oblong shape raced up to my fly and snatched it from the surface.
“Blam!” I yelled, setting the hook. Small flickers of chrome reflected in my eyes as the little fish struggled to free itself, which also caught the eye of something much more surprising. Another shadow bolted from the depths, only this one was gunning for my struggling fish, and happened to be the size of a large Hickory Farms summer sausage. The speed of the large fish took me by surprise, and it only stuck around for a second before it disappeared. I quickly brought in my little fish and unhooked it, with little goodbye, before I stood to cast back out for a chance at the bigger fish. 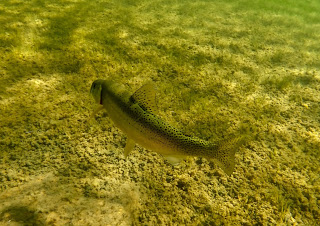 Small fish were smacking my fly, and I resisted setting the hook on them in hopes they would shake free and the bigger fish would steal my fly from them. That technique was only working half way: the smaller fish were shaking free from my hook, but the bigger fish were not taking the opportunity to steal the fly. After several attempts to entice the bigger fish, I decided it was time to move on. I lifted my fly rod, causing my fly to wake across the surface of the water, which got the attention of the big fish.
“Oh no, no, no!” I yelled as my fly came off of the water before the fish could take it. 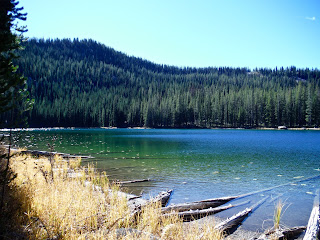 I stood there far too long trying to bring that fish back up again, with no luck. I saw that Bert had moved further around the lake and thought that I better do the same. 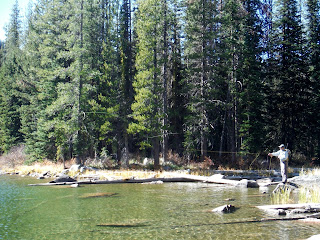 Together, Bert and I leapfrogged each other from spot to spot in search of fish. One of the major reasons to get to the other side of the lake was to have the wind at our backs. As soon as we hit the other side, the wind switched directions and remained blowing in our faces. That’s typical, I thought as I went to cast my fly.
“There we go!” Bert yelled, and I looked over to see his rod bent with a fish. 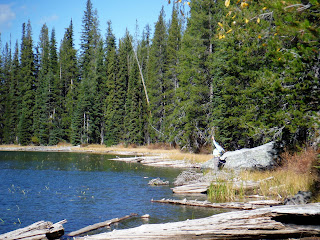 “This is a big fish!” Bert yelled, “A very big fish!”
“Big enough for a picture?” I asked.
“Yes… And there are two more following it!” Bert’s voice cut through the wind as he kept yelling with excitement, “Get over here and cast to one of these other fish!”
I was already ahead of Bert. I had my line in and fly connected as soon as I heard there were some big followers, and was in full sprint through the thicket, headed his way. I arrived too late to see the other two fish, which was ok, but I was more surprised that my fly rod didn’t snag in a tree limb as I scrambled over. There was no need to get close to the bank to see Bert’s fish; as I approached I could see the mass of it as it thrashed in the shallow water.
“Bert! It’s a monster!” 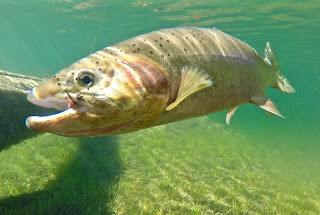 Nether Bert nor I had a net to reign the large fish, so we made sure the fish was finished fighting before Bert held it up for the camera. 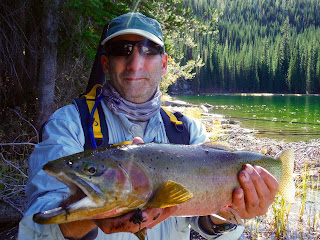 “Just look at that fish, Bert!  Stop everything and just look.” I said jokingly, yet being serious. There was no need to say that to Bert, because he was right next to me looking at his fish.
“It’s a nice fish.” Bert said, as we both stood over the fish that was back in the water and rejuvenating.
“You don’t even know…” I said, trying to recall a time when I had seen a bigger fish in an alpine lake, let alone caught one. 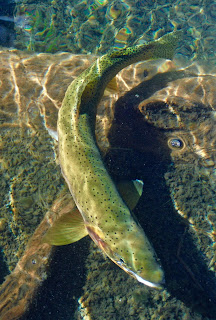 “There it goes.”
“Yep.” Bert said, as we both watched his fish slowly swim away. The clear water allowed us to fully appreciate the release, as the fish swam deeper and deeper until its shadowy form was the only thing we could make out… And then it was gone. 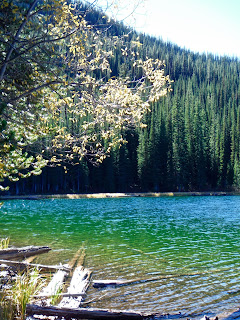 I hit Bert on the shoulder and smiled after we stood up from watching the fish. My gesture was taken as a compliment, as Bert smiled back. I could tell he was purely happy about his fish, and he stuck around that spot a while longer while I continued around the lake. 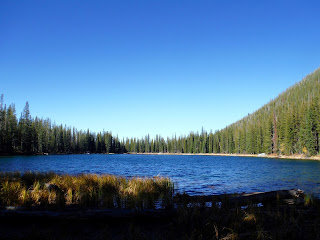 I always make a point to hike all the way around every lake I come to, and as I made my way across the northern shadow of the mountain I started to regret that decision. It was clear that this part of the shoreline didn’t get much sunlight, if any at all. The ground was extremely wet and muddy, so there was no walking on it unless I wanted to sink ankle deep. Furthermore, the logs I was walking on were wet and slick from being splashed by the waves that were blowing straight at me. I could only hope that Bert was not experiencing the same as he retraced his steps to head back the way we had came. After I was through the most dangerous part of the path, I did hook into one more fish. It was nowhere near the size of Bert’s monster, so I let it go without a photo. 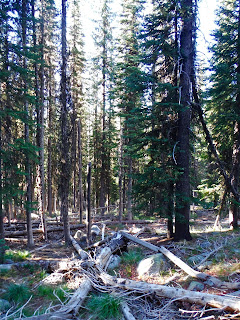 Bert and I managed to find our way back to the car, which is tough when the Forest Service does not maintain the path.
“That is a hell of a way to end the high mountain lake season.” I said to Bert, showing him a picture of his fish on my camera.
“You will have to get me out again next year.” Bert said, as he sat in the driver’s seat of his car.
“On the contrary, my friend. It will be you that needs to get me out next year.” I said.
“That’s right! You’re going to be a dad by next season!”
“Yep!”
“When is Gracy due?”
“February 20th”
“Well… It’s fun. Your life will definitely change, but it’s fun. I’ll be sure to get you back up in the mountains.” Bert said, as he kicked his car into gear.
“Here’s to that!” I said, raising my water bottle up to accept his gesture, and to solute our last alpine lake of the season.

3 thoughts on “A Monster In The Mountains”