Skip to content
Getting our little dog, Kiwi, to get in the car in the mornings can be tough. Normally that means she is getting dropped off at the groomer, which she hates, but this morning was different. She heard us mentioned an alpine lake and she bolted for the garage. When it was time to head out we couldn’t find her, and it had turned out that when we had the doors open to pack up the car, Kiwi had snuck in to make sure she would not be left behind.
“There you are!” I said to Kiwi, who was firmly planted in the driver’s seat, ready for a hike. 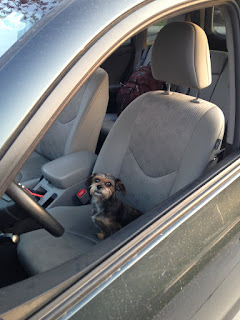 Deep Lake was our destination, and when we pulled up to the trailhead Kiwi couldn’t wait to get out of the car. The distance from the carseat to the ground is a large leap for little Kiwi, but she didn’t hesitate to jump as soon as the door was opened. 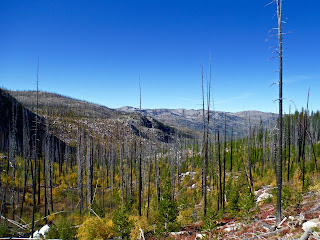 The hike to Deep Lake is a short and popular one, which can mean it gets a fair amount of visitors and anglers in a season. The truth is that you never know if an alpine lake is going to fish well; whether it is an easy hike or a hard one, there are no guarantees. So hiking to some easy ones can be a nice change from the steep hike to Snow Slide Lake the previous week.  Although the path is not nearly as steep or long, it is important to have plenty of water on you. Half way to the lake, Gracy stopped to offer water to Kiwi. I wasn’t sure if Kiwi would drink from the straw, but when Gracy held it out with water dripping from it, Kiwi stood under it to lap up the falling water. 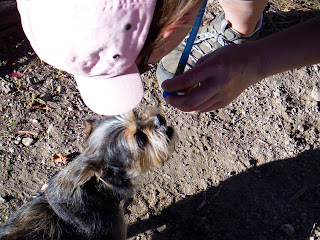 The lake was not too far up the path, and as soon as we spotted it my eyes sourced the surface for a rising fish. Gracy and Kiwi found a spot to relax as I started my hike around the lake with my fly rod in hand. 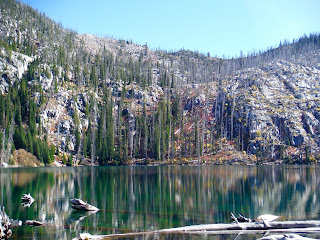 The lake was so still and the clarity was amazing, to the point where this lake almost looked fake. I could easily see over fifteen feet deep into the water, but where were the fish? I looked all around the water for any sign of movement… but could see nothing. This wouldn’t be the first time I have overlooked a sneaky trout, and the only way to bring them up is by presenting a fly. 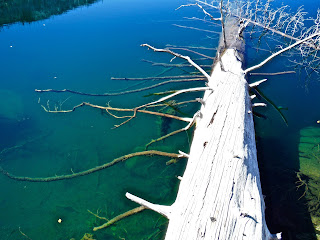 A small ring grew larger as my fly sat on the surface of the water, and I waited for a fish to bolt up from the shadows of a fallen tree or rock to take my fly. Just as I had feared, nothing came up, even after a few twitches of my fly. As I walked over to another opening in the trees, I zeroed in on some movement in the water like an osprey. I froze and watched an eight-inch brook trout swimming just under the surface. It was gulping food off the surface and moving fast. I unfastened my fly from the rod, pulled some line out, and made a quick cast that immediately spooked the fish. My line hadn’t even hit the water before the fish bolted, its squirming little body quickly scurried into the deep blue water and out of sight. 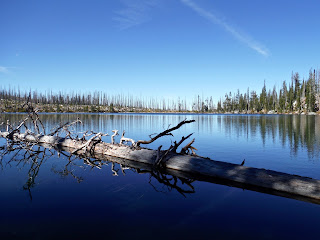 After that reaction it was obvious that this particular lake gets more pressure from anglers than the average alpine lake. As fast as the fish spooked, I thought it was time to go into “stealth mode” and that means I BECOME THE FOREST. It sounds a lot cooler that what actually happens. I just become hyper aware of the fish’s cone of view, and of my approach to the water’s edge if I get a casting opportunity. Sure enough, a fish came up and started feeding on the surface. I had stepped far enough away from the water to blend in with my surroundings, but still have a clear view of the feeding fish. A large tree blocked the fish’s vision of me, and I moved slowly, using the tree to eclipse my approach. With the large tree and the surrounding shrubs, there was no way I could make a cast. Well, not your typical cast anyway, but a slingshot cast may be doable. I slowly unhooked my fly and drew back my hand, while pointing my fly rod forward to create some tension. Whoosh! I let go of my fly, and it plopped on the surface. The accuracy was way off, but it didn’t matter. The fish turned on a dime at the sound of my fly hitting the surface, and ate it without a care in the world. I set the hook in silence, and brought in the seven-inch fish quickly. 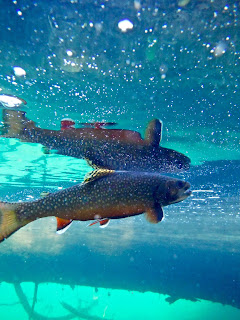 All that effort for such a small trout… It seems rather asinine, but for me it was quite the accomplishment. It was almost a shame to let it go so quickly after walking around half the lake to find it, but it was just as enjoyable to watch it swim back to its home. 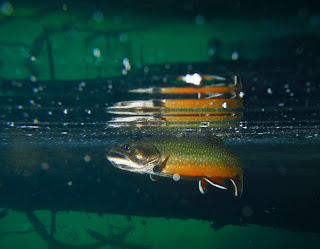 Any other fish in that spot spooked from the commotion of the fish when I had brought it in, so I moved on. The lake remained still as ever as I made my way around its entirety. I was only spotting a few brook trout no bigger than the size of your pinky along the way, and their mouths wouldn’t even be able to fit around my fly. 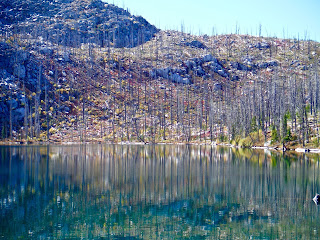 “How was the fishing?” Gracy asked as I kneeled down to pet Kiwi, who ran over to greet me as soon as I came into her view.
“It was tough. Only one good sized fish, and others were so small they shook off before I could bring them in.”
“That’s too bad.” Gracy said, as we packed up our gear and said goodbye to Deep Lake. 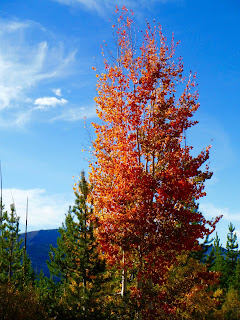