Skip to content
“We always come out here when it’s raining.” Feef said, looking out the window. I turned off the car, and it didn’t take long for the view to become distorted by heavy raindrops after the wipers stopped.
“It’s the best when it’s raining, Brother!” I said, and hopped out to gear up. Feef quickly followed, and we were both walking upstream when he said, “I think I know how to dry fly fish now.” 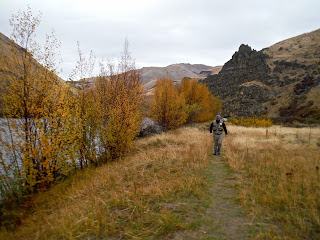 Feef was looking forward when he was walking, so it took him a moment before he realized I was starring at him uncertainly.
“What?” He said, “I do!”
“Well…” I said, with heavy doubt, “I guess we will see.” 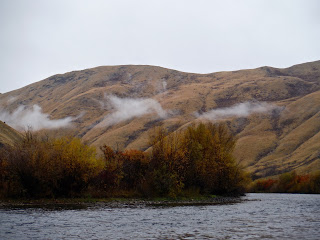 The rain really started coming down as we made our way across the river in search of rising fish. I already had an olive RS2 tied on my line, and for good reason. Despite the rain, it was easy to make out the disturbed water where fish were rising. It was now time for Feef to prove his dry fly fishing skills. 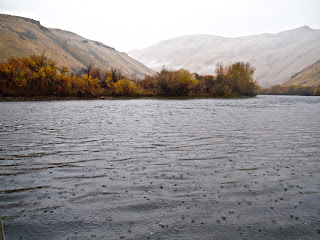 “Do you see them, brother?” I asked.
“Yep.” He said back, his eyes fixed on a fish that was rising nearby.
“That’s your fish. I will go over here to get out of your way.” I said, and left Feef with the steadily rising fish. 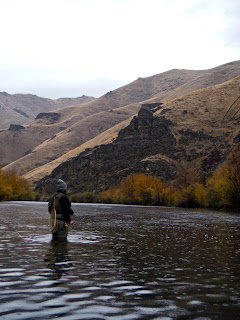 I watched Feef for just a second, and to my surprise he didn’t start casting right away. From the look of it, he was timing his fish before making his first cast: a good sign he may have just known what he was doing…
A fish rose in my casting region, which grabbed my attention, and with all the confidence in the world I presented my RS2.  I was trying out a new leader I had rigged up with the tapper measurement from my French friend, Eric Bacon. My ten-foot-five-weight Helios fly rod turned over the leader easy, but as it extended my fly fell out of view.
There it is, I said to myself after catching a glimpse of the wing. I watched fish rising out of my peripheral vision but none were taking in my fly, so I went to cast again.
“What the heck?” I said, as I lifted my fly rod and had a fish on. I was obviously watching the wrong fly drift downstream and had missed the fish rise to my fly. But that’s ok; I’ll still take the fish! 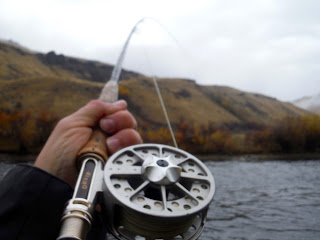 The first healthy specimen of the day kicked away with no trouble at all, and with others beginning to rise more and more I dried off my fly to get back to fishing. 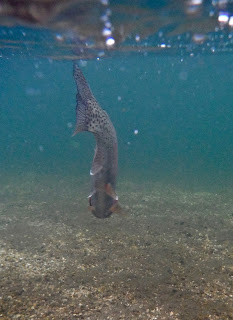 Feef was making a few well-timed casts to the fish he was working, but the fish didn’t seem interested.  As far as I could see he was doing everything right, but sometimes there is that one stubborn fish that won’t take a damn thing. With that in mind we switched spots in hopes that he could cast to a fish that would eat his fly, and I watched as the fish Feef was after kept rising. 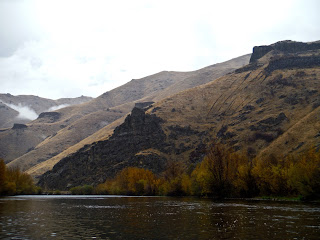 “Oh no, Brother!” I said laughing. “No, no, no!”
“God damn it!” Feef said, heavy hearted, as he looked over to see that I had hooked into the very fish he had struggled with just moments ago. 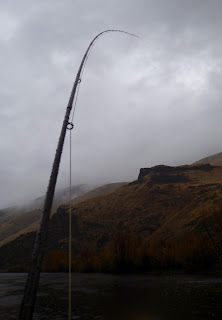 “I don’t know what happened, it just ate it.” I said, obviously suppressing my excitement.
“Ohhh, it just ate it.”  Feef said, sassing my words.
I just looked back at him with the kind of smug-smile I knew he would want to punch off my face.
“God!” Feef yelled out again, “I hope it breaks off!”
“Now, Brother… Don’t hate the player.” I said, as my fish took off for another run. 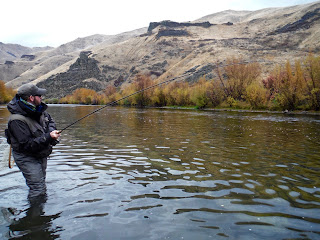 “Look at how red the stripe is on this one.” I said, after I netted my fish.
Feef came over to look before I unhooked my fly and dipped the fish back into the water. 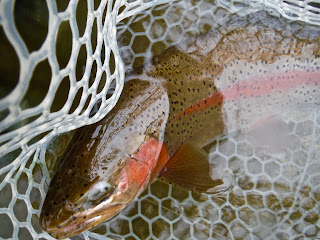 The red stripe from the fish was still very visible under the water, and we kept our eyes on it as it disappeared into the river. 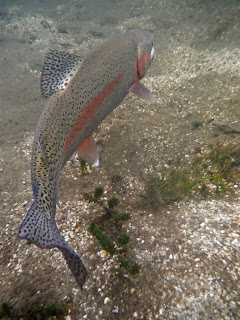 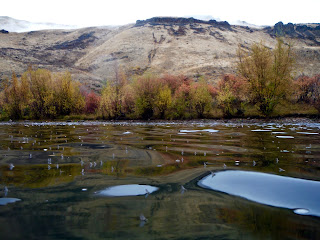 “Do you see those?” I yelled, pointing to a few hundred bugs on the surface of the water. “Those are baetis, and we mimic baetis with a BWO.”
“I know!” Feef yelled back.
“So then why the hell are you fishing with a black elk-haired caddis?”
Feef didn’t answer back…
“How long have you been fishing with that fly?” I asked, after I took a breath.
“Well… I lost the RS2 on my second cast, then switched.”
“So you have been fishing with the caddis the whole time…” I asked rhetorically. 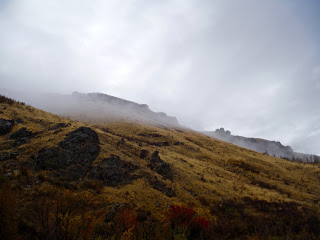 “I just want to catch a fish with the help of my brother…” Feef said, looking so pathetic it made me laugh.
“Give me your fly.” I said, but grabbed it before he had a chance to hand it over.
“Get that fish.” I said, handing him a fresh BWO RS2.
Feef didn’t hesitate. He got into a good casting position, and timed the fish before he presented his fly.
“There!” He yelled, shooting his fly rod to the sky.
“There it is!” I yelled happily, after seeing my brother’s frown turn upside down. 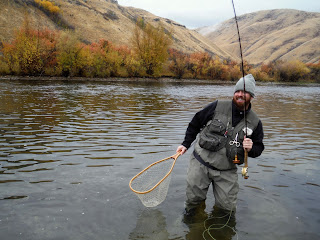 “God, it feels so good to have a fish!” Feef yelled out as his fly rod jolted like a seismograph detecting an earthquake. The fish was putting on a show by leaping out of the water a few times before it was close enough to net.
“Come on, come on!” Feef said under his breath, as he followed the fish around with the net like a dog chasing its tail. 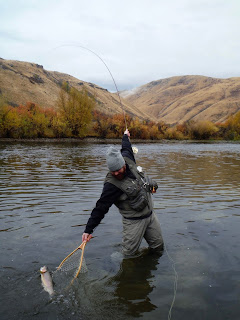 “Get it, Brother, get it!” I said to cheer him on.
Feef was still chasing the fish around with his net, but made one step closer and landed his fish.
“Yeaaaaa!” He yelled, holding the fish in the net. 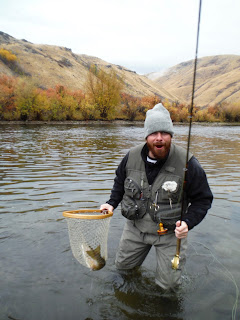 “Don’t forget to give it a drink of water now.” I said, reminding Feef to keep his fish in the water.
“Yeah.” He said, keeping the fish in the water as he unhooked his fly.
“This is a nice fish, huh Brother?” Feef asked.
“It is. Do you want a picture?”
“Hell yeah!” Feef yelled, and held up a nice looking rainbow trout. 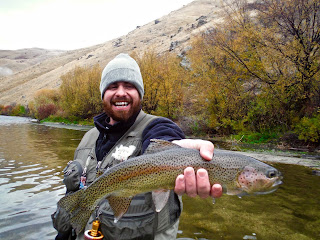 “Well…” I said, after Feef let his fish go, “… will lightning strike twice?”
“It better!” Feef said happily, drying off his fly to take a shot at another fish. And another fish came indeed. Feef targeted a nearby rising fish, and had it timed quickly. A few casts had him hooked into another fish. 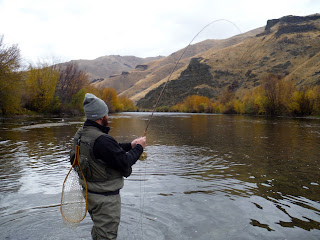 Instead of chasing his fish around, he brought in his leader a little more so that landing the fish wasn’t as much of a challenge. 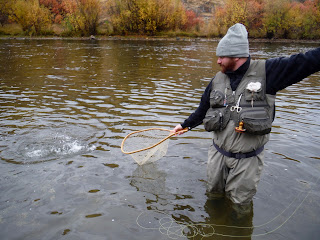 After we had admired his fish, I figured it was okay for me to go back to fishing. 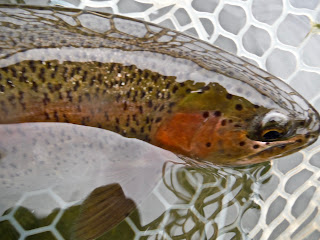 Feef was holding his own, hooking into another fish downstream from me, just as I was landing a fish of my own. 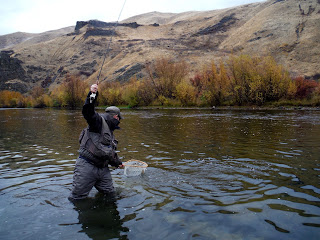 “You have to look at the spots on this one.” I said, happily.
“Oh now that’s a nice fish there, Brother.” Feef said, taking a quick glance, still fighting his fish.
“Yes it is… just look at those SPOTS!” I yelled. 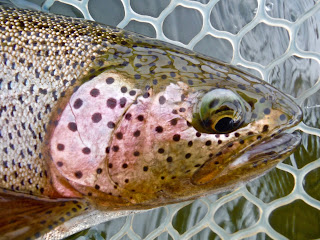 “Look here!” Feef yelled out as his fish drew near.
“Your tearing it up, Brother! Go get ’em!”
“Okaaaay!” He hollered back. 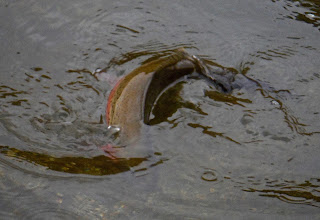 “Are you still getting them on the RS2?” I asked.
“Yeah, but I haven’t caught as many lately.”
“I switched to the Magic Fly, and it seems to be doing the job.”
“Can you give me one?” Feef asked.
“Yeah.” I said, and handed over the fly, then went back to fishing.
“There’s one!” I yelled.
“This is definitely the fly to have!” I said, after landing my fish and taking a quick shot before letting it go. 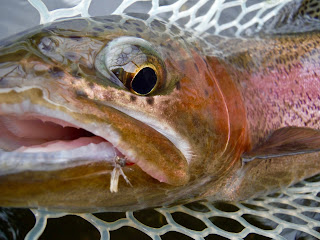 With the both of us hooking into fish after fish the day flew by quickly, and before we knew it, it was getting hard to see. 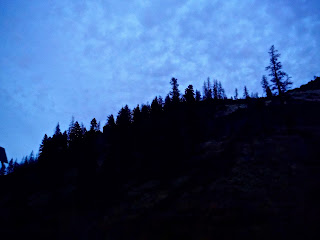 “Well, Brother. I think it’s time to get going.” I said, letting my last fish of the day back into the water.
“Yep. It’s getting cold, too.” Feef conceded, and we made our way back to the car.
“Great day!” Feef said, as he broke down his fly rod.
“We caught a lot of fish today, Brother.”
“Yes! And it’s about time I got into some good dry fly action.” He said.
“Now you know…” I took a deep breath, “ ..what it’s like to be me.”
“Oh, shut up! He thinks he’s all cool!” Feef said with a smug sound in his voice.
“But you were right, Brother. You have gotten way better at dry fly fishing.” I said, starting the car.
“Yep, and of course… I can’t come back next week because I have to leave town for work.” He complained.
“The fish will be waiting for you.” I said, and drove away from the river, knowing Feef would return on his own next time, and forget all about the RS2.

6 thoughts on “Getting Much Better”