Skip to content
It was Gracy’s idea to make our last trip before the baby comes to Bend, OR. To make sure we spent plenty of time together, I pushed fly fishing off until the last morning of the trip. Preparation started the day before at the Fly Fisher’s Place in Sisters, OR. After one quick stop, I purchased my license for the next day, and set my alarm for 5:45 am to ensure I had plenty of time to get to the river. 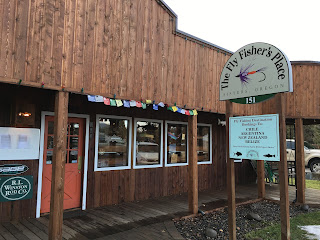 I woke up with a jolt and saw the light piercing through the curtains of our hotel room. My alarm had not gone off! I glanced at the digital clock on the nightstand and it read 8:30 a.m. How could this happen, I thought to myself, and tried to get up but couldn’t.  I was somehow pinned in the covers and couldn’t move. I tried again, but still could not budge. Knowing I had no time for this struggle, I conjured up my morning strength and bolted, to sit up, on the bed.
The room was now pitch-black, with the low green glow of the digital clock on the nightstand. What the heck, I thought, struggling to see. I shielded my eyes from the green light of the clock, as I looked directly at it… 3:53 a.m.. I plopped back down on my pillow, remembering how difficult it was to go to sleep in the first place. I laid there for a while, feeling like I hadn’t gotten a wink, and the only thing to suggest I did was a nightmare about waking up too late to fish. Screw it, I said to myself, and got up to head off to the river. 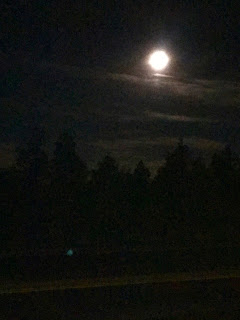 I had prepped my fly rod and gear the night before, and pinned the location on google maps to my destination so there would be no getting lost. 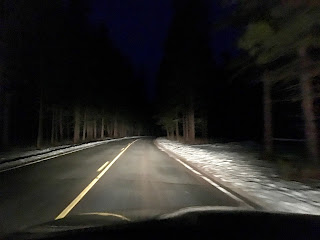 When I had arrived to the spot it was far too dark to start fishing, so I slapped my waders on and waited until sunrise…or what I would argue was a sunrise. 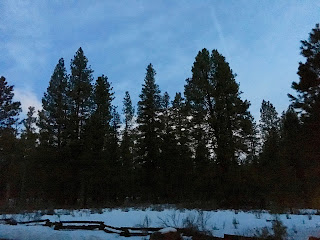 The air was cold, but not freezing. The sound of my studs clicking on the plowed road was fading as I stepped closer to the river. I stepped off the road and noticed a sign nailed to a tree… 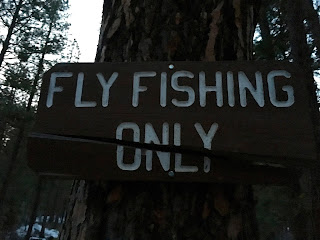 Call me elitist, but I love seeing signs like this. To me it means that an incredible amount effort and time were dedicated to the protection of this river. Fellow anglers lead the charge to see that changes were made to maintain its integrity for future anglers like myself. I took a deep breath, taking in my surroundings, before I continued walking. This is a river that can’t be judged because no matter what I think, it is loved by its local anglers, and for that this river deserved my respect. 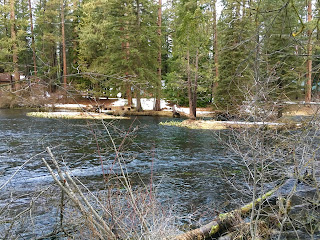 I had my Polish nymphing rig set up because I knew nymphing was going to be the game for today, and started fishing a promising looking riffle. My flies hit the water and I was leading them through the stream, hoping for a strike. Nothing, not even a stick, grabbed hold of my flies. Normally I would have worked the riffle a little longer before finding a new one, but there was so much water to fish and so little time. 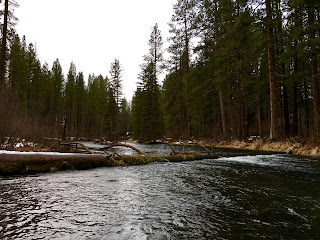 There has got to be at least one fish in here, I thought to myself as I stepped into some new water downstream of a fallen tree. I quickly put my flies to work, and was moving through the riffle fast. My slinky jolted out, and I quickly set the hook on something that was not a stick. It was glorious. The first fish of the year was hooked, and it wasn’t long before I had slipped it into the net. Not a bad little brown trout, I thought, and dipped it back into the water to continue fishing. 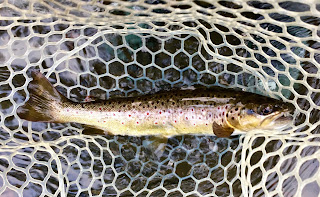 I reached behind me to reconnect my net to the magnet, when I saw a rising fish out of the corner of my eye and a chill went up my spine. Before I got too excited, I stopped and watched for another rise, and saw one, two, three… The fish were porpoising like crazy, and they were huge. I started to panic. How am I going to get to those fish without spooking them? What are they eating?? There is no hatch, and I still have to rebuild a dry fly leader! I had my nymphs clipped off so fast, you would think I performed the task with a machete. I pulled out my 6X tippet to extend my leader, and when I glanced back downstream my heart dropped. Three river otters poked their heads up, chomping away at what they had found to eat, then went back to porpoising to get another mouth full of food. 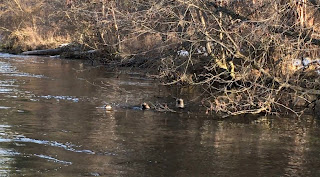 “Damn it!” I said as I slipped my 6X tippet back into my vest. I looked at my leader that now had no flies attached and got even more upset. I wanted to dry fly fish so bad, that I had believed the backs of river otters were the world’s biggest rising rainbow trout… How stupid!
I reluctantly tied my nymphs back onto my leader, and look at the time. I had thirty minutes left to fish, so I walked back upstream to the bridge to finish off the day, but there was someone already fishing there. 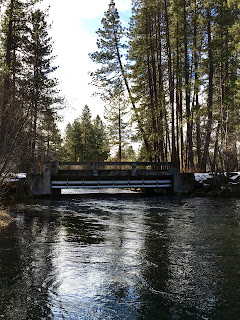 I sparked up a small conversation with the man before I asked if it was okay if I fished upstream of the bridge from him.
“Actually…” The man said, after I had asked, “no, it’s not okay. The river is closed upstream from the bridge. But, you are welcome to fish right there if you wish.”
The man was pointing to the water just opposite of him, which was a very nice gesture.
“Seriously?” I asked.
“Yeah, go ahead!” He said happily, so I shimmied my way into the water.
“There are a lot of white fish here, but every once in a while you will get into a red-side.” He told me, referring to a native type of rainbow trout that are found in this river.
“That would be nice.” I said, and flicked my flies into the river. My slinky stretched to signify a take, and I set the hook, bringing in a little white fish. 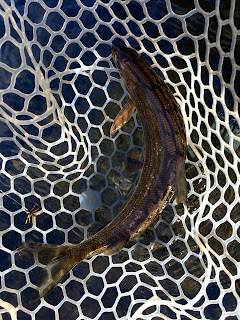 The gentleman across the river from me was also tight line nymphing, but I could tell that he may have been new at the technique. Given the small amount of room we had with a very deep hole just in front of us, I switched my approach to a French style of nymphing shown to me by my friend, Eric, from France. With this technique, I was easily bringing in a fish every minute I had left on the water, sometimes having two fish on at a time. 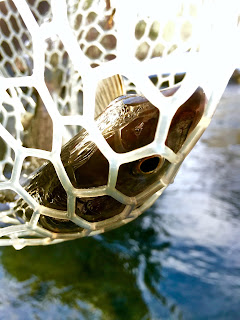 My alarm chimed on my phone, letting me know it was time to get going.  Before I left, I let my fellow angler know about my French approach to nymphing and thanked him again for sharing his spot on the river. As I crossed the bridge to where I was parked I wished the man well, and left at the sight of him hooking into a fish. 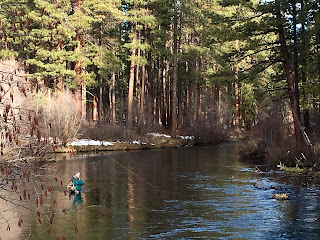 “How was fishing? Did you get your first fish of the year?” Gracy asked, after I had returned to the hotel room.
“Fishing was fantastic, and my first fish of the year was a brown trout.” I said with a smile.
“Good.” She said, and smiled back.
I could tell by her smile that she, along with I, really enjoyed our last weekend vacation before becoming parents.