Skip to content
“Oh my God, look at that guy!” Phil said with amazement looking out the window of my car as we headed out to fish. I glanced out the passenger window and saw what Phil was talking about. There was a guy with his shirt off, carrying a 45 lb circle-weight down Simplot Hill for exercise.
“Doesn’t he know he can just roll that weight down the hill?” Phil chuckled.
“This is the North End, Phil…” I said, while Phil kept watching the guy’s face straining as he mechanically walked downhill with the weight. “… People that live in this part of Boise think that is fun.”
“Geez…” Phil mumbled.
“What do you say we get the hell out of this part of town?” I said, and Phil concurred. We stopped to grab a fishing license before gunning it to the nearest section of river to start fishing. 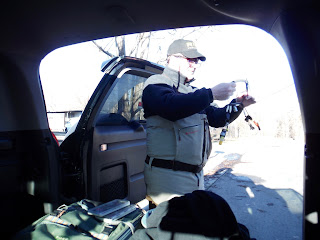 Phil and I were rigging our fly rods for euro nymphing when his phone chimed with a text message.
“I won’t be able to fish with you guys today. Can you get some shots of the Shadow II for me please?” Phil said, reading his text message from Pete Erickson.
“Do you have a Shadow II on you?” Phil asked.
“No… I’m fishing with my ten-foot-five Helios.”
“Neither Erik or I have our Shadow II fly rods.” Phil said, reading the text message as he wrote it back to Pete.
Phil’s phone chimed gain, and Phil let me know that Pete was not happy we were not going to get any picture of his Shadow II for him.
“Hold on, Phil.” I said, as we started our walk to the river. I took out my camera and took a picture of both of our shadows.
“There! Send that picture to Pete.” I said, smiling over at Phil, who loved the solution. 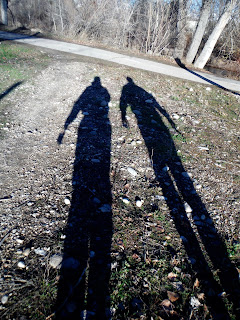 Even though it was a beautiful 44 degrees outside, I was still wishing I had worn my gloves. The slight breeze was biting at my little fingers, but there was no time to run back to the car. 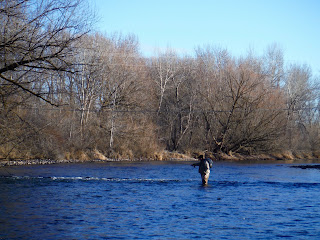 Phil was just upstream from me, and we were both fishing the water hard. Finally, my slinky sprang out to indicating a strike. I set the hook fast, and a two foot stick shot back in my direction.
“Whoa, Phil!  This one’s a jumper!” I yelled, getting Phil’s attention.
“Nice! You caught the first stick of the year!” He yelled, then went back to fishing. 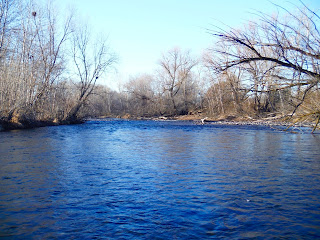 Yes, catching sticks is one of the drawbacks to European nymphing: the nymphs we use are heavier than normal, and go straight to the bottom of the river; therefore, something like a stick that is stuck in-between a rock will catch onto the hook and trigger the slinky as if a fish had hit your fly. It’s really no big deal, except… for a split second… there is a little give to the stick, and with the water pushing it downstream, it can react like a fish pulling on your line. It’s the disappointment a second after you recognize you don’t have a fish, and having to deal with a yucky stick that tricked you. 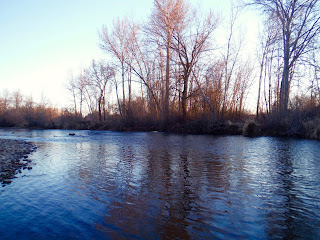 It was a few sticks later when Phil and I decided to try a different spot in the river. I already had five sticks under my belt for the evening, while Phil had none… But who keeps track of these sorts of things? 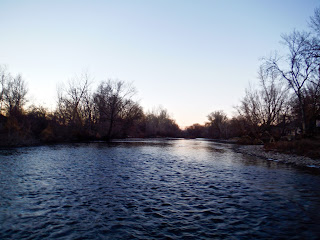 The new spot looked promising, and Phil started fishing the nice diamond-water producing a shallow riffle that I have had great luck with in the past. Phil was doing everything right: his flies were flicked right above the drop-off in the run, his rod was held at a perfect 45 degree angle, and his lead on the flies was a touch faster than the current to ensure an immediate hook set if needed.
“There it is!” I yelled, after Phil set the hook and his fly rod bobbed with a fish.
“Oh, no!” Phil laughed, after lifting his rod higher to reveal he had a rather large stick.
“Man, that felt good too.” Phil said, unhooking his stick and releasing it back into the water.
“It looked like you had a fish on.” I said.
“Well…You know what our problem is?” Phil asked. “We should have been targeting sticks if we wanted to catch trout.” He laughed, as he made his last cast of the day. 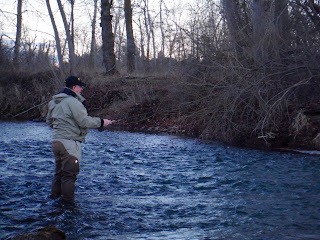 “Well, it’s still worth getting out.” Phil said, as he packed his gear in the back of my car.
“Yes it was…” I concurred.
“It really felt nice to get that stick in.” He laughed.
“Well, not that I was keeping score, but I did pull in a few more than you today.” I said.
“True, but I did get the big stick of the day.” Phil said, seriously. We got in the car and I put it in gear to drive off.
“Wait!” Phil yelled… “Is there a reel sitting on the back of your car?” He asked.
I got out, and sure enough, Phil’s reel was sitting, cold and alone, on the back of the car. The poor thing was cold to the touch, and still wet from fishing. I got back into the car and handed Phil his reel… “The poor thing probably feels neglected.”
“Shut up and hand it here.” Phil laughed, as we pulled away… An expert in fly fishing, Phil Rowley started the first fly fishing day of 2016…SKUNKED!

5 thoughts on “First Stick of the Year”