Skip to content
My wife would be full term in a few days, which meant this trip would be the last one outside of cell phone service for a while. The desire to hit one of the main streams in our area was tempting, but I decided to take a different road today. 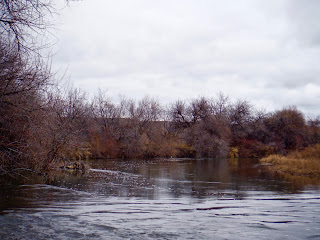 I received a tip from my fellow colleague, Ryan Spillers, that this favorable river was fishing well. Being a touchy river, I knew I had to take advantage of this opportunity, and who better to do it with than by brother, Kris? “These flies get deep fast!” Feef said with excitement, after he made a quick flick to send his flies into the water.
“That’s key when you are euro nymphing, Brother!” I said, happily.
“Stand right there…” I said, pointing to a particular spot, “… That’s the first place I hooked into a fish when Pete Erickson taught Phil and I how to euro nymph.”
“K.” Feef said, taking a few steps to position himself before making a cast. 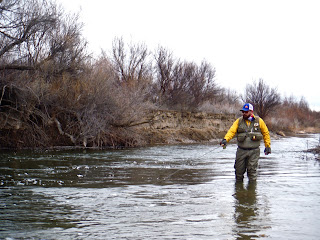 Feef had his arm casually to his side as he kept his fly rod tip high to lead his flies downstream. The infamous stance of a tight line nympher shows a guy with his arm stretched out over his head. Not only is that not necessary, but it will tire out your arms and neck pretty quickly. Without knowing it, Feef had the stance of someone who knew what he was doing. And let me tell ya, it’s about time.
“There’s one!” Feef said, setting the hook.
The fish sprang into action as soon as it felt the pressure of Feef’s hook set, and started flying out of the water. Watching the first fish of the day fighting is always the best, and this one did not disappoint. 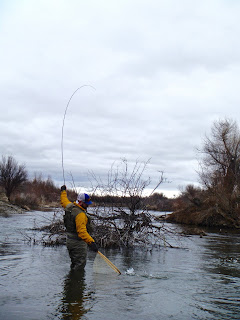 Feef spun around because the fish had bolted behind him, and was able to land it quickly after.
“Let’s see it!” I said, after the hook was removed from the fish’s mouth.
Feef held up the fish, but the fish was camera shy. It started flopping in his hands and got away before we could get a decent picture. It didn’t matter, because there would be plenty more. 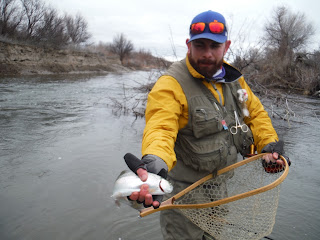 “Okay, Brother, it’s my turn to get after this.” I said, stepping a bit downstream from him and flicking my flies into action. 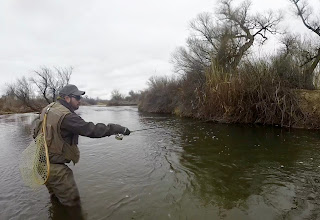 Tight-line nymphing with a ten foot fly rod makes all the difference in the world. My leader is rigged up with a 9’0X leader with a slinky at the end, and another ten feet of tippet that is split between 3 and 4X. I always use the heavier of the two as my tag in-between tippets for my lighter fly, and the fly at the end of the leader – the point fly – is the heavier of the two. If you are having a hard time picturing the euro leader in your mind, then you are not alone… But the rig has proven itself over the test of time, and it was three casts in before the slinky extended and I set the hook. 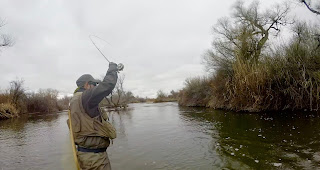 “There it is!” Feef yelled, as I skated my fish right into my net to land it fast. 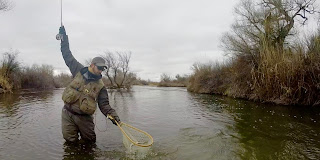 “Want a picture?” Feef asked me.
“Nope!” I said, unhooking my fish and dipping it back into the water. I made another cast, and hooked another fish.
“No sense wasting time with pictures!” I yelled happily. 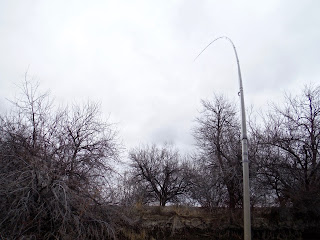 “Ok, calm down…” I said to the fish, who was still trying to swim away through my net.
“No pictures, huh?” Feef asked, as I pulled out my camera.
“Well, it’s a good looking fish!” I said, and snapped a shot of it before I let it go.

“Take this spot; there must be a pocket here.” I said to Feef, who had not caught a fish since his first one.
“Okay.” He said, and we switched spots.
He slapped his flies down and was leading them downstream at the same flow of the current. When he reached the end of his drift, Feef made a small hook-set, which is a technique I passed on from Pete Erickson, and it was just what he needed to nail a fish. 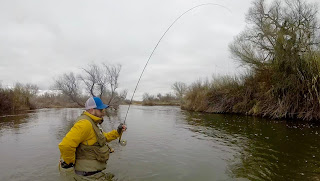 “I’m in the pocket!” He yelled happily fighting his fish.
The fish here were are not big by any means, but it didn’t matter. Feef and I hadn’t been fishing for more than five minutes when we had already brought in two fish each.
“Brother, if the fishing keeps up like this, then we are in for a day of catching!” I said happily.
“I need a day like this!” Feef said, as he unhooked his fish and dipped it back into the water. His fish held itself suspended in the water for a second, allowing me to take a picture, before it shot off. 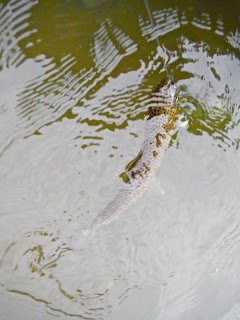 Feef and I were a force to be reckoned with as we leapfrogged each other from spot to spot. The day was flying by, and the cold day had no affect on us. 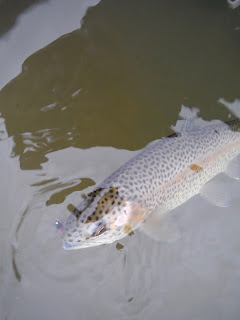 “God, Brother ,we can do no wrong!” Feef said, landing another fish.

“That’s because you are getting better at your technique.” I said.
“Someone told me that I wouldn’t catch any fish because of my bright new Simms jacket.” He said.
“Well, you are shooting that theory to hell.”
“There’s another one!” Feef said, with his rod at a bend.
“It’s a double up!” I said, setting the hook on a fish to fight it alongside my brother. 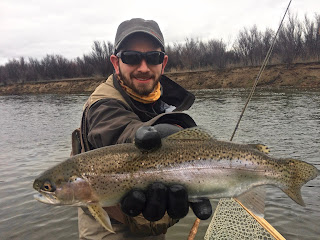 “I think I got the big fish of the day!” I said, holding up my fish for a picture.
“Well, it’s getting late. Are you ready to get out of here?” Feef asked.
“Let’s each get one more fish.” I said, to stretch out the day a little longer; however, it didn’t take long.
“We should come back here next time.” Feef said, as he slipped the truck into gear to take off.
“I can’t. Gracy could go into labor any time after this weekend, so I need to stay in cell phone range.”
“Oh yeah!” Feef said.
“And you will be an uncle!” I said.
“Uncle Feef!!!” Feef said with pride.
“God help us!” I said with a laugh, and we drove home leaving behind a great day on the river.

5 thoughts on “Out of Service”