Skip to content
“Ever since that time we got stranded on the South Fork, I have been buying survival gear.” Kelly Mort said, remembering his first fly fishing experience with me.  An Idaho experience is what he was looking for, and An Idaho Experienceis what he got.
“What kind of survival gear?” I asked with a chuckle.
“Well…” Kelly said, with a pause. “The latest thing is a survival knife that can start a fire to keep me warm.”
I began to laugh.
“Dude! And the weird part is… I don’t buy knives!” Kelly said, and then continued his explanation. “Like, I am not the kind of person that goes out looking for knives to buy, but when I saw it had the capabilities to start a fire… It reminded me of how cold I was that night, and I had to buy it.”
“Well, hopefully you won’t need that this morning.” I said, as we geared up to fish the Boise River in town. 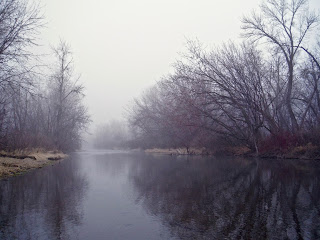 “We call this spot “Steve’s Spot”, because it was my buddy Steve Adkins who shared it with us.” I said, as we waded through the water.
“Will he be mad that you’re showing it to me?” Kelly asked.
“No. Steve is a good guy. If you were to run into him here, and were struggling to catch a fish, he would be the kind of guy to come over and offer help.” I said.
“That’s cool.” Kelly replied, and we began to fish. 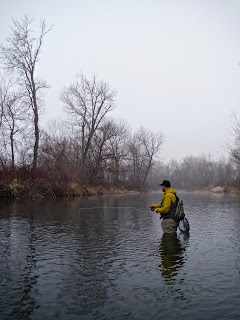 “I just saw a fish rise!” Kelly said with excitement.
“Seriously?”
“Yeah, right over there.” Kelly said, pointing.
“Throw your nymphs over there!” I said, with the thought of the rising fish being more of an anomaly rather than an actual feeding fish. 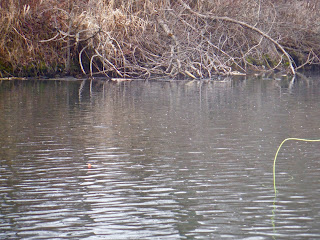 Kelly’s indicator settled in one spot, and with no current to pull it anywhere it just sat motionless…but only for a second. The orange bubble dipped under the surface and Kelly set the hook.
“Got it!” He yelled, and with my camera ready I got a shot of the fish jumping right after he set the hook. 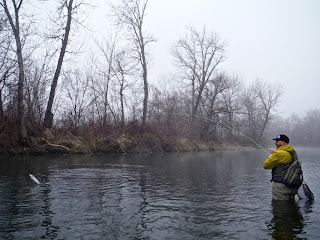 “Dude, this is awesome!” Kelly said happily as he fought his fish. He had hooked into a rainbow trout, and it was doing it’ best to get away.  Kelly held his own by keeping his line tight and the rod tip high.
“First fish of the year!” I said in celebration after netting his fish.
“No one is going to believe this!” Kelly said, admiring his fish.
“Then let’s get a picture!” I said, and Kelly didn’t hesitate. 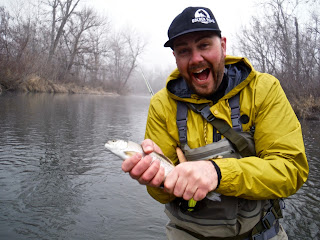 Kelly dipped his fish back into the water delicately, and let his fish slip from his fingers.
“That…” Kelly said with a smile, “…was awesome.”
“Get your fly back out there.” I said, but Kelly didn’t need to be told. As soon as his fish darted out of sight he had gathered his line to make another cast.
His indicator plopped down on the stagnate water, and it darted under in a matter of seconds.
“Whoa…!” Kelly yelled, not expecting a fish to take his fly so quickly. His line still had quite a bit of slack in it, so Kelly reacted by pivoting back in order to set the hook. 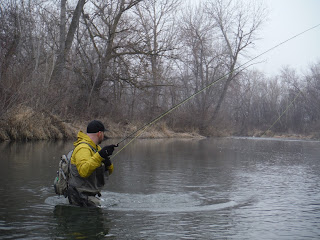 His pivot maneuver worked, and a fish was on. This fish was much smaller than the last, so the fight was over quick.

“It’s a white fish.” I confirmed, as Kelly held it up and out of the water for me to see. 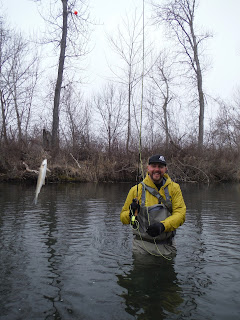 “Want a picture with it?” I asked.
“Na.”
“Okay, I’ll unhook it for you.” I said, pulling out my forceps and twisting the barbless hook out of the fish mouth.
“Well… It’s about time for you to get going back home.” I said, after his white fish bolted off.
“I was just going to ask you what time it was.” Kelly said, reeling in his line. We both started walking back and geared down quickly to end our morning of fishing.
“I was getting cold out there, so it’s a good thing we got off the water when we did.” Kelly said, turning on his car to warm it up.
“Track pants? Is that all you had on to keep yourself warm?!” I asked in bewilderment.
“Yea…” Kelly said, “I need to get some warmer pants.”
“Yes you do! Even your fire starting knife won’t save you with that get-up.” I said with a laugh.
“It’s true!” Kelly said back, looking at this pants.
With all of our gear packed away, Kelly stopped me ust before we parted ways and said, “Don’t hesitate to call my wife if you have any questions about raising your kid. She is an awesome mom, and has lots of good advice.” Kelly said.
“Thank you, sir… I may take you up on that.” I said, and we both drove off after a great start to our day.