Skip to content
After a long day of fly fishing and a late night out, I thought waking up at 5:30 a.m. would have been difficult, but it wasn’t. In fact I was awake long before 5:30, laying in bed hoping to get a little more sleep before 5:30 came, but no such luck. I crept up the stairs with only the shimmer from my phone to light the way, and saw that Joel was up as well. He took his dogs out to go potty and came back in to fix up some coffee while I had tea. With the dogs good for the morning, he fastened three arrows in the holder of his compound bow. I grabbed the slate turkey caller, and followed Joel down and into the blind. 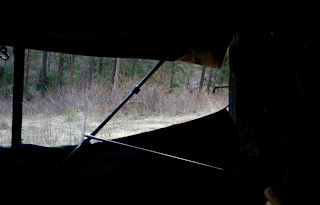 Turkeys were gobbling in every direction, but I think I could make out the calls of five different birds. It was time for me to make some enticing hen calls with the slate… SCRATCH, SQUEAK, SUQEAK! The sound I produced made me cringe, but I was quick to try again. SCRATCH! I immediately stopped.
“What the hell?” I whispered. “I was making the calls so well yesterday? I am sucking at this right now… and when it matters most!” Although I was whispering, Joel could tell I was frustrated.
“Yes, you are sucking at this right now.” Joel whispered back… “Just in case you were looking for validation.”
I smiled and shrugged, disbelieving my two terrible attempts.
“Let me see that.” Joel said, and took the turkey call to try his luck. ERP, ERP, ERP… The sounds that he made were perfect, and he did it once more before handed the call back to me.
We sat in silence for a little while, wondering why we hadn’t heard a gobble. I was about to make another hen call when Joel asked, “What is that?”
His voice was barely a whisper, but I could hear what he was talking about. It sounded like a furnace was being lit, almost a deep, folf-ing noise of igniting a fire. It happened again, and then it dawned on us… It was a strutting turkey.  No sooner had we figured it out than a turkey came walking about ten feet from the blind. 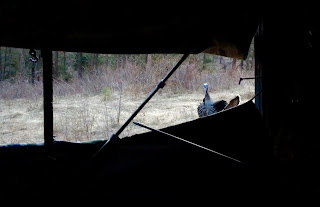 We both froze, and with the turkey so close, Joel didn’t risk knocking his bow. We both heard the low, base-like sound come from the turkey as it strutted in front of our blind. 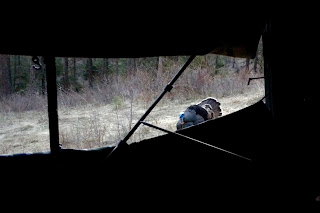 I was watching the turkey, but could clearly make out the sound of an arrow being knocked. Joel pulled back and held on to the arrow for a long while.

“Shoot it…” I whispered with intensity.
SWOOF!
Joel’s arrow rocketed towards the turkey, but it was a miss. A few turkey feathers floated to the ground indicating how close of a shot it was.
“Damn, how did I miss that?” Joel whispered in disbelief.
The turkey started to run, giving off a few warning clucks but stopped as soon as I made another hen call. 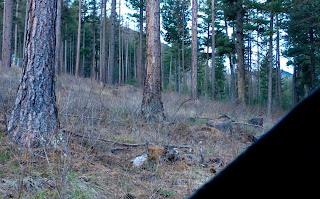 My turkey calling had faltered earlier, but it was superb now. Immediately following the hen call, I was able to produce a purr that not only stopped the original spooked turkey, but brought in two more. 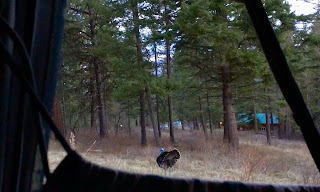 “Get ready, get ready!” I said quietly, but Joel didn’t need to be told twice. Another arrow was knocked as two more turkeys came into view.
“The second one is bigger.” I whispered, and Joel took aim. He held his arrow pulled back, and did his best to calm himself. The second, bigger turkey was just out of my sight and a little further out, and that’s the one Joel was aiming for. Joel took a deep breath, then let his arrow fly. 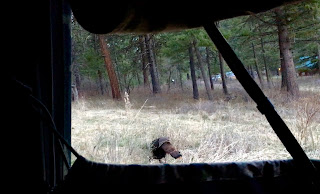 “It’s a hit!” Joel said, a little louder now that he didn’t need to be quiet anymore. The turkey flew off with the arrow stick in it, and we watched the direction it flew before getting out of the blind to look for it.
“I was so fired up when I took my first shot at that turkey, and after I missed I realized I hadn’t even aimed through my sights.” Joel explained, as he looked for his bird.
“I know the feeling.” I said back, and pointed out the bright colors of an arrow under the shelter of a pine tree. 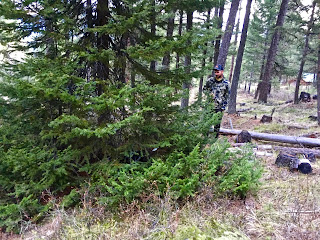 There we waited until we were sure the bird had taken his last breath. When it was all over, Joel grabbed his bird from under the tree and brought it back to the blind.
“Well, we better get a few pictures of your first turkey!” I said happily, as Joel posed ever so proudly behind his kill. 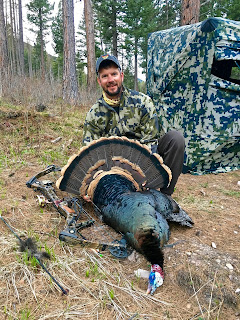 Joel and I replayed our successful morning, remembering fine details about every second of the hunt. For us, it was a nice way to honor the bird that gave its life. After a while we made it back to the house where the rest of the household came out to see Joel’s trophie. It was a good morning, but now we had the Orvis Rendezvous to get to.