It was like a Hank Patterson fly fishing film reunion as everyone stepped out of their trucks to launch their boats on the Bitterroot river. Joel Thompson, whose house was invaded by Hank and his crew in the movie “Hank Patterson’s Reel Montana Adventure“, had set up three boats with shuttles through his outfitting business, Montana Troutaholic, for a day of fishing with the crew. The crew included: Ami Trina, who played the yoga girl in the 2nd film, Jason Jacopian, who was the president of the Hank Patterson Fan Club; and, of course, Travis Swartz, Hank Patterson himself. 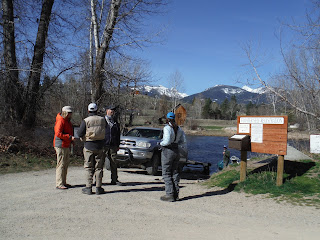 Deb Thompson, Joel’s wife and fellow tea drinker, was also there to join the fun along with fly fishing guides Gabe Miller and Brock Long. After fun introductions we were all set up with healthy looking skwallas tied on to each of our lines, ready to kick off the day. 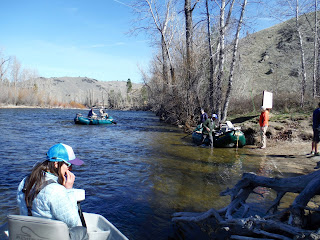 I was in the back seat of Brock’s Adipose boat, with Ami at the front, as we kicked off to fish. 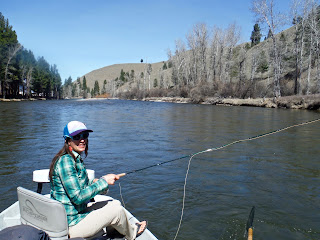 Brock’s rowing was top notch as he got us into perfect position to slam our skwallas near the edge of the river bank, and slam them down we did. Ami and I were doing our jobs by not leaving a single portion of the bank unfished, but nothing was interested. 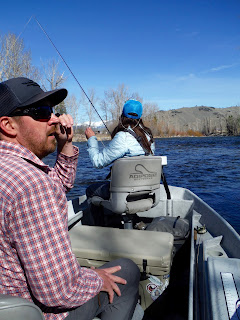 Further downstream we drifted and a fish not so much as a glanced at our skwallas. Still we kept with the dry flies, especially after we saw that Jason had hooked into a nice cutthroat with his skwalla. 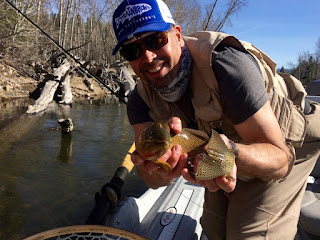 We switched over to the Chubby Skwalla pattern that Jason had been using, and almost immediately afterwards Ami’s fly got a hit.
“Damn!” She yelled, after setting the hook and nothing was attached. It was the only action we had seen in our boat the entire morning, so we all stopped to talk strategy before pushing on. Deb had made cookies for our float, and Travis had his hand out and ready for one before Joel had the container open. 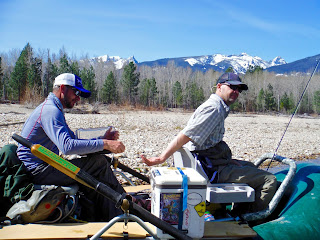 The old-me would have sat back enjoying my cookie until we pushed off to fish again, but I do not have the luxury of fishing whenever I want anymore; therefore I easily talked myself into setting up a full nymphing rig.  I awkwardly held my cookie in my mouth as I fiddled with my leader and selected flies that would hopefully do the job. With the increasing flows on the river, I figured it would be the best way to catch fish. 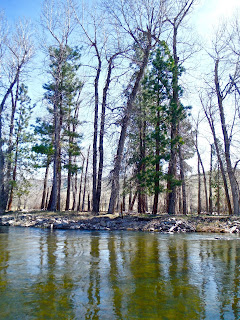 No one suggested a full nymphing rig during our strategy discussion, probably because nobody wanted to be “that guy” who brought it up… But here I am… being “that guy”. The best part about it, is that no one noticed that I had rigged up to fish with a nymph; that was until…
“There’s one!” I said, setting the hook after my indicator went under.
“Oh good.” Brock said, “What did you get it on?”
“A nymph.”
“Are you fishing a full nymph setup?” He asked, as he grabbed his net and scooped up my fish.
“Yep. I switched over when no one was looking.” I said with a laugh. 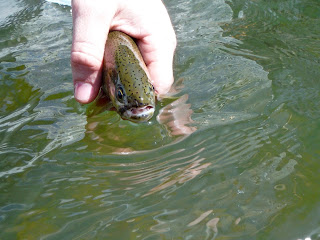 I dipped my fish back into the water, and it shot away fast.
“I had to get the skunk off the boat, even if that meant throwing dirty.” I said, gathering my line to continue fishing.
“Hey, with how today is going, that’s okay with me.” Brock said. 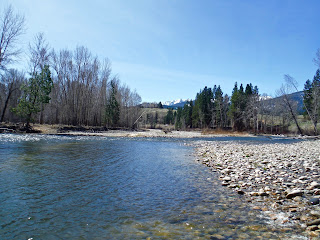 It was a good decision for me to switch to nymphing. I was getting way to aggressive with my dry fly fishing, and too often I was encroaching into Ami’s water getting our lines tangled in the process. With nymphing I could easily stay behind the oars when fishing, and it had paid off again. This time it was a brown trout that took the rainbow warrior I had as a dropper. Brock was there with the net, and was also willing to snap a picture of me with my fish before I let it go. 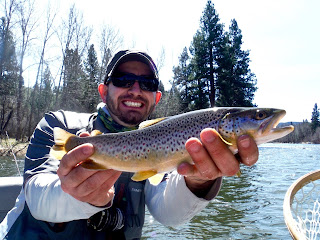 I had to hand it to Ami. Despite my immediate success, she stuck it out with her dry fly. She did add the same dropper as I had on, and tried her luck with that as I continued to nymph deep.
“Get that seam, there!” Brock said, and he added a few extra back strokes to give us more time to deliver a good presentation.
Ami hit it first with her dry dropper, and I with my nymphs. My orange indicator shot under right in the seam Brock had pointed out, and I set the hook fast.
“Got it!” I said, and Brock went for his net.
“It’s a nice one!” I said happily, noticing the fish was fighting harder than the last two. My hands were lifted over my head to bring up the fish over Brock’s net, and with one healthy scoop the fish was landed. 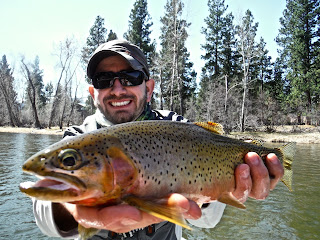 “That’s why I love the Bitterroot; it provides nice cutties like this.” Brock said, as I let the fish slip from my fingers. We continued downstream until we caught up with the rest of the crew who was already parked and out of the boat. Joel was cooking up some Brats on his portable grill while the rest of us determined who was the next to row. 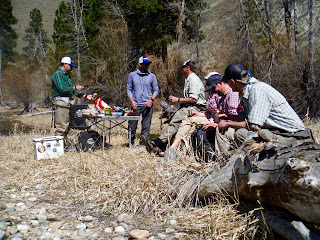 In the mean time, Joel had poured everyone a shot of Kentucky Bourbon to toast the passing of Reese Ferguson. Parked on the side of the Bitterroot river seemed like the right place to honor a man who we got to know through fly fishing, and it was a nice gesture by Joel to include Reese in our day. 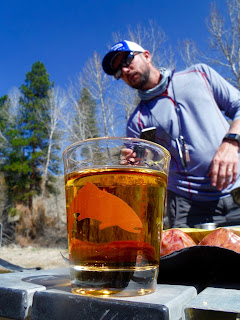 Just as Joel was packing up his gear to continue our float, Brock pulled out his fly rod and walked up the slow stagnate braid in the river that looked uninhabited. Armed with a skwalla, Brock took careful steps to get into position to make the perfect cast into the deeper part of the side channel. His skwalla landed with a splat right on the outside of a small stump in the water, and the next thing we heard was the thrashing of a nice sized brown trout. We all watched in disbelief as Brock landed his fish, and I didn’t waste any time running down to get a picture. 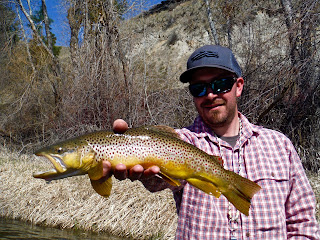 The excitement of Brock’s fish had us all determined that a dry fly skwalla was the way to go for the rest of the day. I was now behind the sticks and doing my best to get Gabe into some fish. We would often stop and fish some promising runs that looked fishy, but would turn up empty before pushing on. 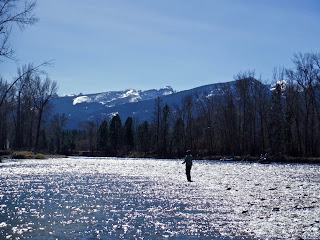 After a while of rowing, Gabe took the oars so that I could have a shot at the front of the boat.  With nothing hitting Gabe’s dry fly, I switched back to a full nymphing rig. 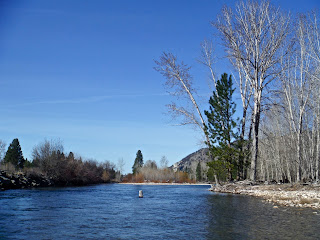 The success rate had gone up after that, only I kept losing every fish I was hooking into. One fish in particular ripped line from my reel before it became unbuttoned. The thought of losing that fish haunted me, but it was short lived because the take out was just up ahead. 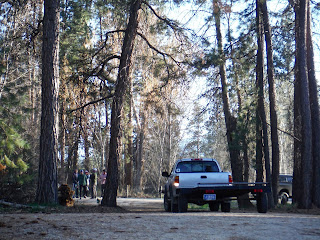 “How was the rest of the day?” I asked Deb who came to the edge of the river to see us in.
“It’s a little tough when the guy in the front of the boat is flogging the water.” She said, glancing towards Travis. I quickly looked over to see if Travis had heard Deb’s comment.
“Darn, he didn’t hear.” I said, smiling.
“It was okay. I did get a fish on a dry fly.” She said, after Joel and Gabe got the boat on the trailer.
“That’s good.” I said, as we all gathered our gear and said our goodbyes.
Tomorrow we would fish Rock Creek, and with any luck the flows will remain neutral, providing us clear waters for good fly fishing. I can hardly wait.