Skip to content
Warm temperatures cause snow to melt off of the mountain, and when that happens the runoff muddies up the water. This makes for tough fly fishing, but that was not going to stop us. Also, we could only fish for half the day if we were going to make it to the Orvis Rendezvous for cocktail hour.
Joel drove Travis, Jason, and I to one if his favorite stretches of the creek, and we geared up knowing the deck was stacked against us. To my surprise, Travis was ready to fish at the same time I was, so together we walked to the river to see what we were in for. 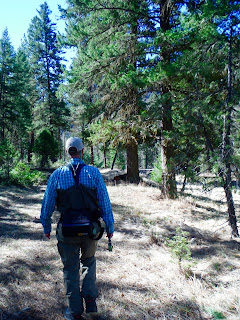 The flows were definitely high and the water was too murky for dry fly fishing, so I tied on some of my favorite euro-nymps to get deep where the fish might be. The best looking water was across the creek, so I carefully made my way over. Sadly, I was only there for a short amount of time before Joel called me back to drive further upstream. Getting across the river in the first place took me a while, and now I had Travis watching me as I inched my way back. It wasn’t like he was there to help me if I fell; he was there to just witness the fall, if it were to happen. He had even found a large wading stick that he held at his side while I shuffled my way over. 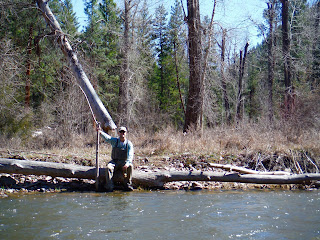 A few close calls but, to Travis’s disappointment, I did not fall in. We all made it back to the truck where Joel drove us upstream to some calmer water. The water was still off color, and sadly there would be no escaping that today. I still had my euro-nymphing leader on, thinking that would be the best-bet outfit to hook a fish. Travis hit the water first, armed with a skwalla. He was fishing the rocks I wanted to nymph, but if there was a chance he could get on on a dry fly, he deserved the first shot. 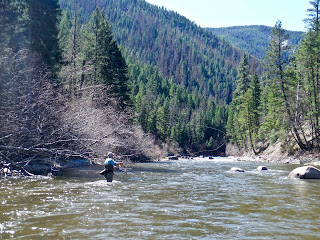 Nothing had so much as looked at Travis’s fly, so I started to move into position to nymph around the large rock. 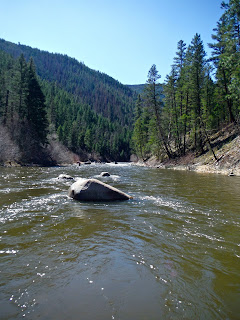 I was slapping my flies down hard to give them extra velocity to get deep fast, and that was exactly what needed to happen. On my first cast right behind the rock, my slinky sprang to life. I set the hook quick, and the weight of a fighting fish was unmistakable. It performed a few acrobatic tricks by leaping out of the water a few times before I netted it, and on a day like today, I was happy to even see a fish. 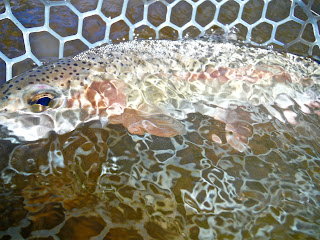 I spent a lot of time nymphing behind that first large rock after I let my fish go, only to come up empty handed. I made my way right behind the large rock to nymph the rocks directly upstream and, once again, I slapped my flies down hard to get them deep fast. 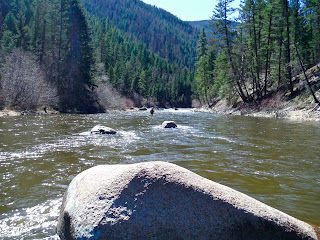 I was leading my flies downstream when my slinky jolted straight, and I set the hook.
“There’s another one!” I yelled upstream to Joel who was throwing a streamer. He gave me a thumbs up and continued to pitch his streamer as I netted my fish. 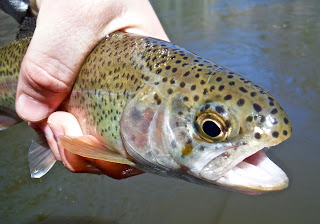 I dipped the little rainbow back into the water,and watched it bolt away in the murky water. I hooked my net onto my back, and gathered my flies to make another cast when I saw Joel was hooked into a fish. His electric blue fly rod shimmered in the light as the weight of a fish doubled it over. 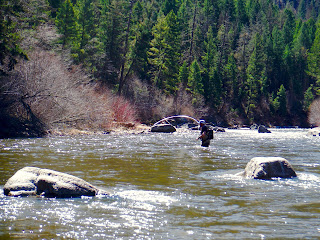 Joel brought the fish in fast, and didn’t bother with a net. He simply scooped up his fish with his hands when it was tired. 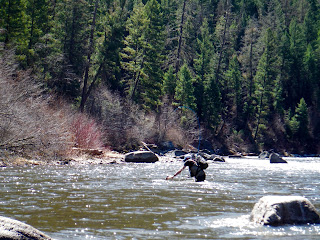 Joel hooked into another fish as I continued to nymph the rocks, but two each was all we could bring up. Travis had said he had hooked into a fish, but after further questioning it turned out he had back-casted a small trout… and who knows where the poor thing ended up. 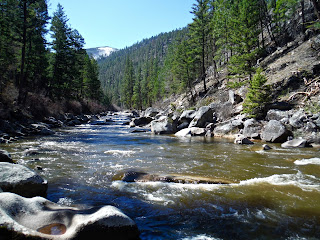 With the water getting more and more murky, we decided it was time to head back into town for the cocktail hour at the Orvis Rendezvous. After having a baby, it would be nice to kick back and have a drink or two with friends in the fly fishing industry. 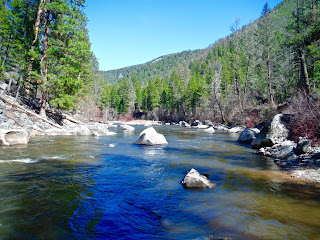 “I’m going to get a Sex on the Beach!” I told the gang, as we entered the Rendezvous.
“You are not going to ask for a Sex on the Beach.” Travis stated with confidence, as we walked into the festivities.
“Like hell I’m not!” I said, and got right in line to order my drink.
“I think I’m going to have to see this for myself.” Jason said, as I got closer to ordering. I was soon the next one to place my order, and with Orvis taking care of the bill I was feeling chipper.
“What would you like, dear?” The bartender asked as I stepped up to the counter.
“I’ll take a Sex on the Beach, please…” I said, looking over to see Deb, Joel, Jason, and Travis watching with unbelievably large smiles.
“You know what… make that a double!” I said smiling, which got Jason’s eyes to widen. The bartender quickly made my drink, and Jason drew his camera from his pocket and snapped a picture just as she was handing it to me. 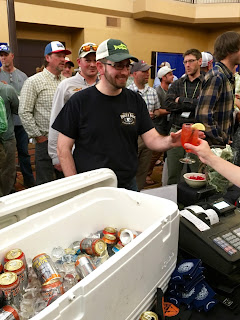 Travis, Jason, Joel and Deb all got beers from the cooler next to the bar, and we kicked around saying hi to fellow fish bums for a few hours before heading to the Tamarack Restaurant for dinner. The Tamarack is one of our favorite places to eat while in Missoula, and after a few drinks at the Orvis Rendezvous it was the best way to end the evening. 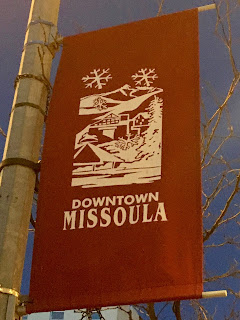