Skip to content
My favorite time to fly fish Lake Lowell is when all the cottonwoods foresting the south end of the lake are flooded in high water, providing a refuge for bass to lurk amongst the trees. Poor Gracy has been plagued with having to hear about the lake ever since the watermark hit flood stage for the trees. One evening, once Mason was all fed and happy, Gracy ordered me to go fish Lake Lowell.  Now I’m not sure if she recognized my need to fish, or just wanted to get me out of the house… either way, she didn’t have to tell me twice. 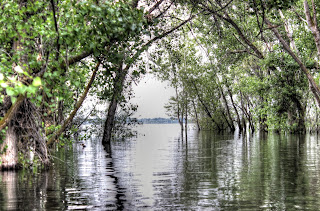 The flooded trees was a welcomed sight. I geared up quickly and tied a popper at the end of my line. The weather was a bit unsteady, and as soon as I stepped into the water large droplets fell from the sky.  It didn’t matter, because I was under the shelter of the flooded forest which also blocked the wind. The water was very still while wading the trees, which is the reason why I could hear the echoes of song birds in every direction. One call in particular caught me off guard, but not in a bad way. Could it be… a hermit thrush? The distinct call was unmistakable, and it pierced through its companion’s. The sound of the hermit thrush made me smile, but I was a bit baffled as to why it was here. The bird is mostly found in the alpines. Perhaps it is migrating and happened to seek shelter in the trees to avoid the rain on its way north. I guess I will have to look up the migration of the hermit thrush, I thought as I flicked my popper in between some trees. 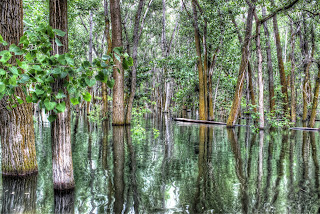 My popper was not bringing any bass to the surface, but I did get a few follows. I switched my fly out with a small crawdad pattern in hopes it would do the trick. I flung my fly where I had seen a bass following my popper, and let is sink before making a strip. A flash about a foot under suggested a take, so I quickly set the hook and felt the fight of a bass. The little guy came in quickly and I held it under water for a cool picture. 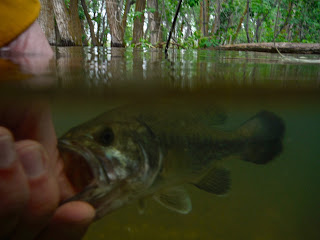 The little bass bolted when I let it go, and when I flicked the water from my fingers I hear the hermit thrush again. I would like to think the little song bird was happy to see that I let the bass go. 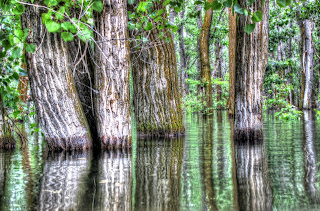 I went back to fishing the crawdad with the same kind of retrieve, and again did not feel a take, but saw the flash of a fish just under the surface. I set the hook, and felt a much bigger bass this time.
“Whoa, here we go!” I said out loud as the bass started to put up a good fight. I didn’t have the range of leverage while cramped in between the trees, so I did my best to keep the bass from running and breaking me off around a sunken log or bush. The bass was not jumping, it was running deep just like I had feared. I tried to lift my rod tip higher, but was stopped by some low hanging branches. I was now more conscious of where my rod was going, and tilted it off to the side to get the leverage I needed and tire the bass quickly. I could now see it, and in a matter of second I had its head out of the water and lipped it before it could take off. 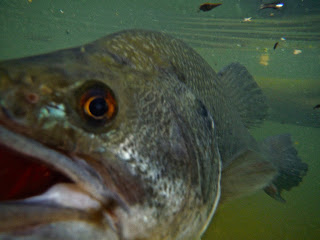 This is a nice bass, I thought as I held it at bay just under the water. I’m sure there are bigger bass in this lake, but this was the biggest one I had ever caught here, so I admired it for a second longer before releasing my grip. The bass did not bolt away like the first one had. Instead it slowly swam away, allowing me to watch as it faded through the trees. 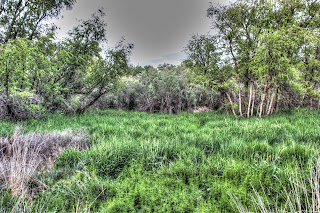 I could have stayed and fished that spot a bit more, but I had promised myself that I would check out different access spots on the lake for future fishing; and find some I did.  I explored until the sun started to set, which provided me with the opportunity to practice my photography. 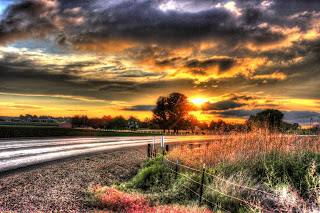 Now the next time I have an opportunity to fish out at Lake Lowell, I have a new spot to explore. I left the lake hoping I would return before the water gets too low, and who knows, maybe there will be another hermit thrush there happily singing its song.