For Father’s Day my wife, Gracy, surprised me with a trip to Elko, Nevada to fish Ruby Marsh. The greatly anticipated Ruby Marsh has been on my radar for a few years now, and mainly because it holds tiger trout. The tiger trout has become one of my unicorn fish, because every time I get the opportunity to fish for them, it somehow gets taken away. 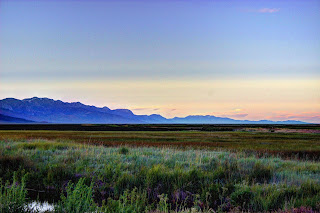 Finding information on where to fish at the marsh took some digging, and even when I had arrived I didn’t realize there were so many scenic roads to take. I picked one and drove around the touring road that cut through the marsh looking for some decent water to fish, but all I drove by was murky looking water that looked too hot to inhabit a trout. 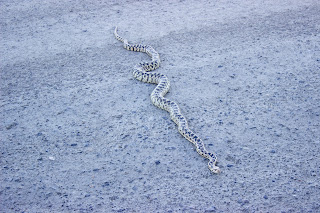 For some reason I had pictured Ruby Marsh to be many interlocking springs connected by large culvert pipes with gin-clear water, and large snobby fish looking for a well presented fly. Instead, it was an actual marsh…
I guess if it were interlocking springs then this place would be called Ruby Springs, I thought to myself shaking my head in disgust of my own ignorant optimism. I was in serious trouble, because I didn’t even know where to start fishing. Lucky for me, I came across three fly anglers that were nice enough to point out a few spots for me to try. The first spot was right near a culvert pipe where one of them had hooked into two fish just that morning. 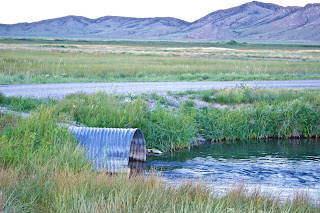 Fish were stacked in the deeper hole behind the pipe, and not just fish, but big fish. I can’t say that any one of them was a tiger trout, but I didn’t care. I had a location to fish, and that was a start.
I presented a nymph to the fish, but they showed absolutely no interest in my fly. I walked away from the fish after some time had passed, frustrated to say the least. Something caught my eye as I walked back to my car: it was a net, obviously left behind by the three anglers, almost covered in the tall grass next to the water. 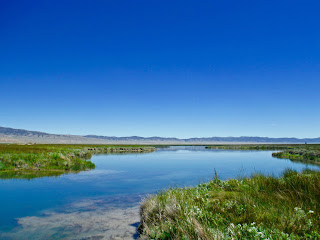 “Dude, you are the man!” said Nick Johnson, the angler who first spoke with me about where to fish, immediately recognizing his net as I walked over to them.
“Found it in the grass.” I said, placing it near Nick’s brother, Chris, who was casting to some fish.
“Did you do any good near that pipe?” Nick asked.
“Nothing.” I said.
“Well we aren’t catching anything here either.”  Doug said, the third angler in their trio.
“Where are you headed next?” asked Nick.
“I’m not sure.” I said.
“Well, you are welcome to fish with us.” Nick said, and so I did for a while. No one was catching anything, but we stuck around because we could see fish cruising in the milky water. These fish, just like the last, wanted nothing to do with my flies. I was beginning to doubt my quest to Ruby Marsh.

Nick had mentioned another spot to try as we fished together, so I figured I better go check it out.
“Thanks for letting me fish with you guys. I’m going to check out that other spot you suggested.” I said before taking off.
“Ok, good luck. And maybe we will join you after awhile.” Nick added.
“Sure thing. Hope to see you there.” I said, and drove off to the new spot. 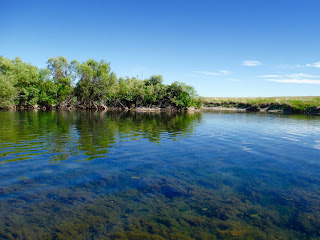 As I walked closer to the water I could see it was gin-clear, and then I saw something magnificent.
“Oh my goodness…” I said, holding back excitement. Cruising fish were clearly visible with the water’s condition, and they were RISING.
I wasted no time tying on one of my favorite dry flies for such a vapid hatch situation, and timed a fish’s path before I made my cast. I watched the fish eat from the surface of the water, and then it saw my fly. With a twenty foot leader there was no hesitation when it took my fly, and as soon it had closed its mouth it erupted out of the water. It knew it had messed up, and the fish had set the hook on itself before I even had a chance to react. 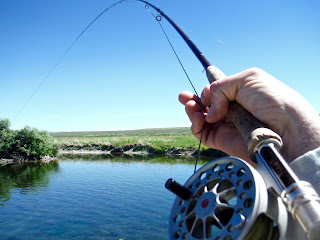 Fly line torched my fingers as it was ripped from my reel, and I kept my rod-tip high as the fish made its first run. I knew right as it leaped that it was not a tiger trout, but I didn’t care. This was an extremely healthy rainbow trout, and it wasn’t about to give itself up easy. The fish slowed down and I was quick with the pressure to bring it in, but it bulldogged me hard. I had to feed the fish line in order to keep it from breaking off as it turned for another run at freedom.
“Geez…” I said to myself, as the fish nearly yanked my fly rod parallel to the water. I made a quick adjustment to regain control as we continued to battle. I knew I couldn’t keep this up for long, or it would end up breaking me off. The fish was digging its nose in the weeds and shaking its head rapidly to throw my hook, and there was no stopping it. Over and over again it tried, but lucky for me it was unsuccessful. Every time it dug its head I feared the worst, but I could tell he was getting tired. I arched my rod tip high and then behind me to net the fish, but as soon as I placed the net under water the fish bolted again.
“Damn, fish.” I said, having to drop my net in order to regain line control. It was a sad attempt at another run, and I knew now that I had it beat. The fish made a few more halfhearted attempts to run, but finally it had no more fight left. I easily slipped my net under the fish and scooped it up, completely filling my net. 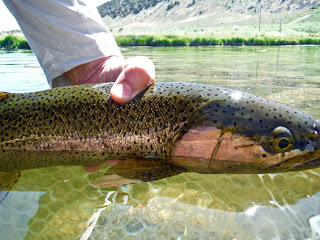 “Wow, you are a nice fish.” I said to it, as I kept it under the water and took out the hook. I knew the fish was going to need some rest before I let it go, so I pulled out my camera to get some under water shots.
“You put up quite a fight.” I said, and by now I could feel it was regaining strength.
“You are a good, strong fish, and you are for my son, Mason.” I said, and released the fish to watch it swim away. 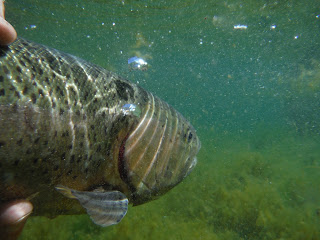 “Are you talking to yourself?” A familiar voice asked. I turned and saw it was Nick, and started laughing.
“If you were here just ten seconds earlier, you could have taken a great hero shot of me and my fish.” I said, getting up.
“Did you just get one?” Nick asked.
“Yes, and it was huge.”
“And you didn’t get any pictures?”
“Oh I got pictures, but I could have gotten a hero shot.” I said, as Nick’s brother Chris joined us.
“He just caught a nice rainbow on a dry fly.” Nick said to his brother.
“What did you use?” Chris asked.
“It’s an attractor midge, size 20.” I said, showing him the fly.
“I can’t even see that thing.” He said.
“Well, I’ll give you one if you want.  And feel free to fish with me.” I said, drying off my fly to return to fishing. 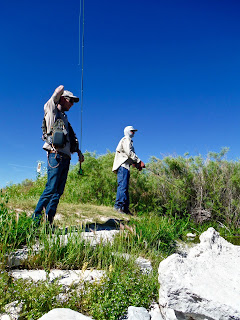 “Just as I suspected…” I said to Nick, after his brother had left to find new water.
“What?” Nick asked.
“The fly I caught that last fish on is not working now. It’s like the fish communicated to the other fish to not eat this fly. I have had three fish refuse it now, and it’s starting to piss me off.”
“I know exactly what you mean.” Nick said with a laugh. 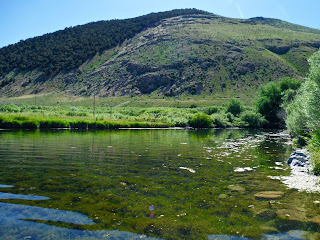 I clipped off my fly, and placed it back into its spot in my box. I pulled out another box to select a fly that seemed to always work for international fly angler, Jeff Currier. Last time I fished with Jeff I saw him putting his fly rod together with a mahogany still attached to his line… “It always works for me, so I just keep it on there…” I remember Jeff saying as he slapped his rod together.
I plucked a size eighteen out of the box, the same a Jeff, and tied it on.
“That’s all you.” Nick said, seeing the same rise as I did. I sent my fly into position, and shielded the glare of the sun from my eyes so that I could keep focused.
“Got it!” I said, setting the hook on another rainbow trout.
“I was about to ask you why you were throwing your line out so far, but now I see why.” Chris said, walking up behind us.
“It’s not putting up as much of a fight as the first one, but it’s jumping a lot more.” I said, as the fish flew out of the water for a third time. The fish tired itself out by jumping a few more times, which is far more than your average jumping trout, and I netted it quickly. 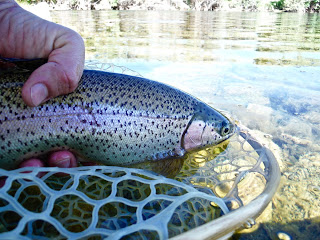 My fish shot off quickly, and it was time for both Nick and Chris to get going. I was sure to keep in contact with Nick, especially after seeing the picture of the tiger he had caught last season at Ruby Marsh. I followed them back to the cars where they met up with their buddy, Doug, before taking off. I had followed them back because it was hot and I needed some water before heading back out to fish. 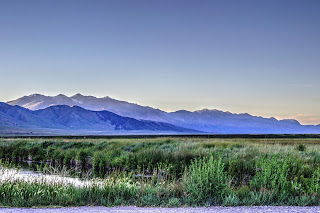 The evening fell quickly on the east side of the Ruby Valley, and soon the moon became visible. 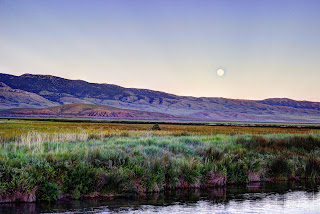 I had hooked into two more fish before the sun set, but lost them both in the fight. I stuck around until the fish stopped rising, and then a bit longer. The temperature dropped to a nice 70 degrees under the shade of the mountains, and I knew it was time to get going. 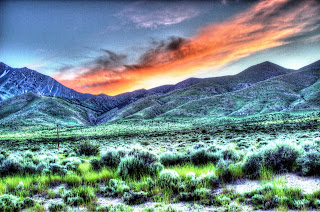 I left Ruby Marsh feeling good about my two fish, but the thought of the missed opportunity of catching a tiger trout loomed like a thick fog as I drove away. Next time that unicorn fish will not be so lucky. Next time…