The lower Snake River can hold some serious gems, and by gems I mean big bass. This is no secret for your average spin fisher, but to a fly angler it seems to be the place to discover. I have only fished this part of the Snake River a handful of times, and each time it has fished like a different river; sometimes it’s good, and sometimes it is bad. When Chris Preston started up his boat engine on the first try, we knew it was going to be a good day of fishing. We were wrong. 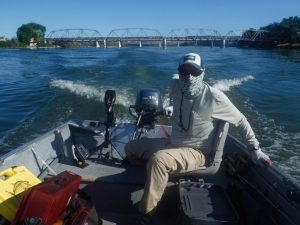 I sat up at the front of the boat to check for bigger rocks as we headed to our location. The reason for this was because Chris has a prop engine, and we didn’t want it smacking on a rock when he had his fifteen horsepower engine cranked on high. A sudden stop at that speed would send us flying out of the boat, so I kept a careful watch.
“Chris, this water is way off color.” I yelled, scanning for rocks.
“I saw that. I hope it won’t affect fishing.” He yelled back over the buzz of the engine.
“I don’t think it will.” I yelled back, trying to stay optimistic. 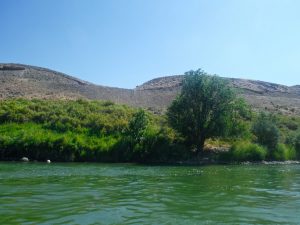 I was wrong…oh, so very wrong. Chris and I pounded the water as we drifted by all kinds of good looking bass habitat, with nothing to show for it. Well, that’s not true. I had already lost five flies, one of which was my Bruce Lee popper. We both were changing out flies every few minutes to see if the bass were favoring a particular color over another, but nothing was working. Well, that again was not true. I did end up catching a small bass on a black bugger, but with it being the only one caught in hours, it seemed more like a pity-take than anything more. 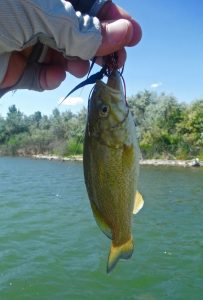 The wind started to pick up, along with the excuses we hurled at one another, like a pleasant game of catch, as to why we were not catching any fish. 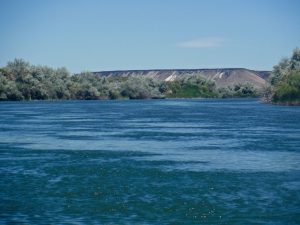 “I’m not trying to make excuses for our failed day, but this water clarity is killing us.” Chris said, making another cast.
“And this weather.” I said. “If we had a touch of cloud cover it would be way better than this blue-bird day.”
“Well I can tell you one thing… It’s not us!” Chris said, with certainty.
“You know, we have been fishing where we think the fish should be. What if we fished over there where they normally would not be?” I said, pointing to the other side of the river.
Chris pointed the boat that direction, and I started to cast, but stopped when I looked up.
“Well, would you look at that…” I said, drifting by.
“There’s our answer! All those damn osprey are taking our fish!” Chris yelled, adding another excuse to our list. 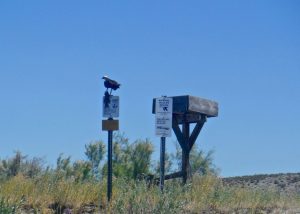 It wasn’t until we had drifted a lot further downstream when I finally lucked into a decent bass. It was a shock to both Chris and I, but maybe it meant fishing was about to get good. 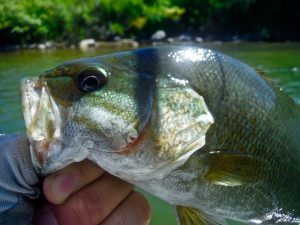 It’s good to be optimistic when fishing, and a fish to the boat is a good sign. Chris started fishing more intently after that, because he was long over due for a fish. He had worked just as hard as me in his search, and in the end it had finally paid off.
“There!” Chris yelled, and I looked over to see that he was fighting a fish. 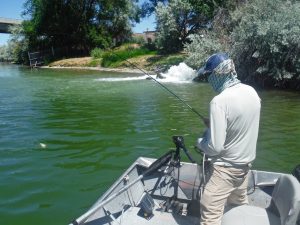 “It was very nice of you to let me catch the first few fish of the day, Chris.” I said, as he fought his fish.
“Well that’s what makes me such a good host.” He replied back with his fish now at arm’s length. He scooped it up and took out his hook quickly before unceremoniously dropping his fish back into the water. 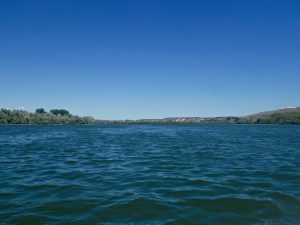 “The only thing that could make this day better is if I got my line caught in the trolling motor.” Chris joked, as he retied his fly line for another cast. The fish gods must not have found humor in Chris’s joke, because as we neared the end of our day, Chris’s brand new 250 grain sink tip Depth Charge fly line got chewed up in the small prop. The mishap with the fly line added insult to injury to our day, and we got off the water soon after. Nothing will beat you down like a hot windy day in the sun not catching any fish. Tired and fried from the heat, we stopped at the nearest Starbucks for a cold drink. As soon as the barista finished topping Chris’s drink with a mound of whipped cream, he started to slurp down his drink, slowly forgetting about his mangled fly line.