In the past I was able to fish the Weiser River near my Mother-in-law’s house just outside of town for small mouth bass, but now-a-days the access to that portion of water has been cut off due to new property owners.  I usually don’t have time to do much exploring for new water when I visit Weiser, so I went to the only place I knew I could easily get access too. 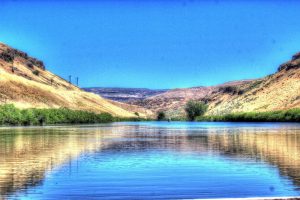 Galloway Dam is where I headed accompanied by my dad who was in the small town of Weiser, along with my mom, to check out the National Oldtime Fiddler’s Contest. We arrived at the dam, and the water flow was much lower that what I had expected. Most of the water was diverted into a canal for irrigation, leaving only a trickle flowing over the dam.

My dad and I walked down to the water, and I didn’t expect much from the water conditions, so I simply tied on a popper and left the rest of my gear in the car. 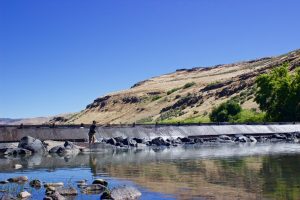 My dad walked around taking pictures as I made a cast with my popper. I brought it back to me with little jolts, making sure my rod tip was close to the water to maximize the disturbance of every pop. Surely there is a bass here, I thought to myself, and I was right. Off in the distance I saw a disturbance that look very bass-like; the only problem was that I couldn’t get any closer to make a decent cast. 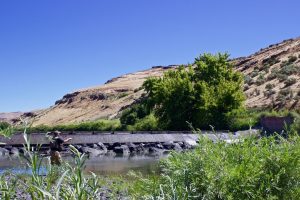 I wasn’t planning on staying long, so I only had my flip flops on, which offered little traction on the rocks that could get me closer. I better not risk it, I thought: peeling off line to make a longer cast. My first cast was a nice one, but it still was not far enough out. I peeled off even more line, and started to double-haul hard. I shot my line forward and it zipped out the rod tip. Then my line suddenly jolted to a stop. I looked down expecting to see a knot in the line, and it was, only the knot was attached to my backing. 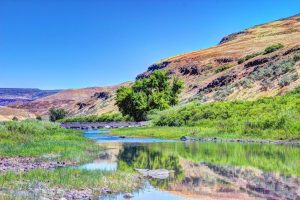 I had just cast my entire fly line with a popper attached, and that was something I didn’t even know I could do. My casting accomplishment was short lived, because as soon as I caught a glimpse of my popper, a bass slammed it.
“You got one?” My dad asked.
“Yep!” I said, as I started stripping my line in fast.
The fish was small, so it was an easy fight. If there was a reason it took as long as it did to bring in my fish, it was due to the amount of fly line I had out of my reel. Never-the-less, I lipped the bass and held it up to show my dad. 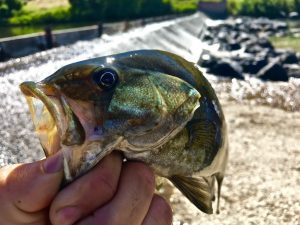 The little fish bolted as soon as hit the water, and I went back to fishing. There was nothing more happening where I was fishing, so I decided to check out the river further downstream. 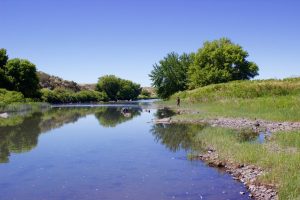 I felt like Luke Skywalker seeking out Yoda on Degoba while walking downstream with only my flipflops on. I did my best to step over or around the muck, but sometimes it was unavoidable. I could feel the slime in my toes and under my feet, which made my feet slide on the top of my flipflops now. Some carp were milling around but I was not prepared to fish for them, so my dad and I decided it was time to get going. 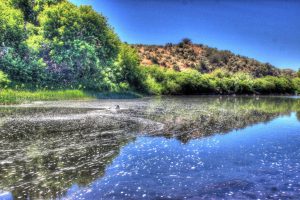 On our way back home I glanced over at a familiar house along the way. It was Spot, the zebra’s house, and he was outside.
“Want to stop and see the zebra?” I asked my dad.
“A zebra!?” He said back, and by the excitement in his voice I knew the answer was yes. 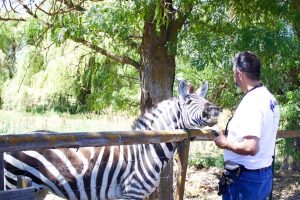 Spot came right up to us when we stopped, and my dad got out to take a closer look.
“Be careful. I know he is okay with people, but he will still bite.” I said.
“Yeah, I don’t want to get bit.” He said, and when Spot dipped his head to eat my dad reached out and touched him. 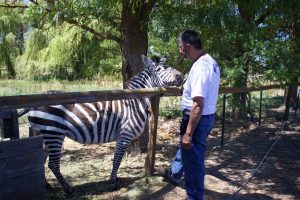 “That was cool.” My dad said smiling as we drove away.
“Yeah, we are lucky he was out.” I said back.
“Are there any other cool animals here?” He asked.
“I know there are some camels in Weiser, but I don’t know where they are.”
“Well maybe next time…” He said, and we drove back to Gracy’s mom’s house to do some yard work.