I have been looking forward to fly fishing with my sister-in-law, Anne, for quite some time. Both her and her husband, Jeff, are serious whitewater rafters, so much that they seek out the most treacherous white water the Northwest has to offer. Whitewater is their number one hobby leaving fly fishing as a second or third thought while on the river. Their adventures leave little time to meet up for fly fishing, so when I found myself in Lewiston with Anne having a day off, we had to take advantage of it. 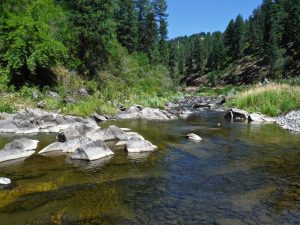 Anne and I found the small creek that Jeff pointed out before he went off to work. The creek was not flowing very fast, but I saw a small fish rise, boosting my enthusiasm to get to the water. 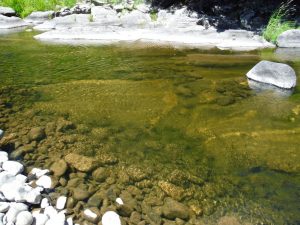 “Okay, I haven’t fly fished in over ten years.” Anne confessed before unhooking her fly to make a cast.
“It’s okay. Fly fishing is easy.” I said with a smile, but Anne looked at me uncertainly. I gave her a quick explanation, and she was casting almost immediately. 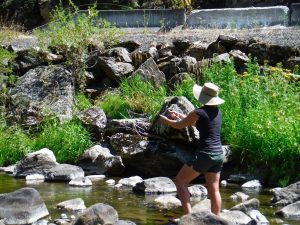 Anne’s fly plopped down in a swift little current that pushed it downstream fast, but it was not too fast for the little trout hiding in the shadows. The little fish bolted up and ate her fly in a flash, and Anne instinctively set the hook.
“What do I do?!” Anne asked while keeping her eyes on the fish. I quickly looked to see if she was controlling her line with her left hand, and she was. As long as she kept the pressure on the fish it should stay on the hook.

“Just keep your rod tip up.” I said calmly, because the little fish didn’t have the power to rip out line. Anne did just that, and the fish was within reach. 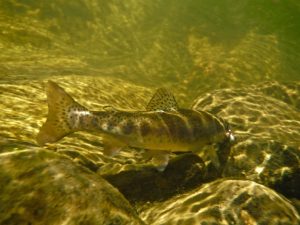 “I would rather not touch it if it’s better for the fish.” Anne said, after seeing her fish twisting underwater.
“No problem, I will unhook it with my forceps.” I said, and the fish bolted as soon as I did. 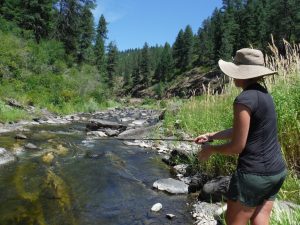 Anne went back to casting, and I started to fish downstream. My fly landed on the surface of the water, and I could see as it bounced up on the skin of the water tiny fish were trying to fit it in their mouths. I could see a small swarm of them biting at the fibers of my fly, unable to eat it.
“Erik, come look at this.” Anne said, looking down into the water. I didn’t see her catch a fish, so I wondered what she was looking at.
“These little fish are mouthing my toes.” She said with a smile, after I got close to her.
“There’s some fish therapy for ya.” I said with a smile. 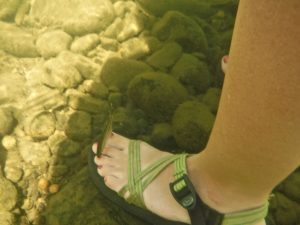 Although the little fish nipping at Anne’s toes were cool, they were a mixture of red-sided shiners and pike minnow. I was hoping to see this many trout, but they seemed to be few and far between. We had walked a ways upstream before we got into the second trout of the day. The trout seemed to be the only fish large enough to eat our flies, so it was nice when one took. 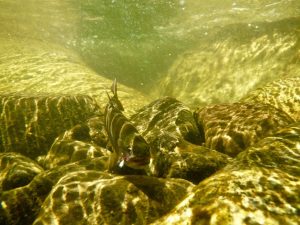 Anne was no longer shying away from casting her fly where a trout could be hiding. She would typically hold off and insist I cast to the spot, but her confidence in her casting was getting better so I held back to offer up the prime water. 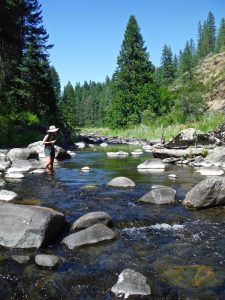 Anne shot her fly out right where it needed to be, but there was no trout. Instead, right as she was pulling up her line to make a cast, a small red-sided shiner took her fly, and she hooked it on her back-cast. 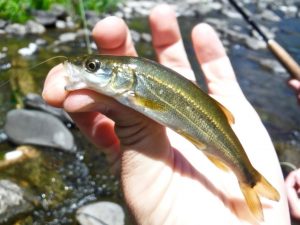 “I didn’t even see that fish take my fly.” She said, as I unhooked it.
“Sometimes that happens.” I said, trying to get my forceps in the small mouth of the fish.
“I don’t even know how this fish got the fly in its mouth.” I said, and then got the fly out and released the fish. 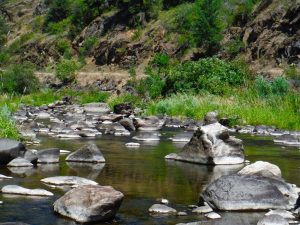 “Will that fish be ok?” Anne asked, as she hooked her fly to her rod to get going.
“Yeah, it bolted off fast.  If it were to go upside-down on me, and get sluggish, I would have had to revive it a little more.” I said, flicking the water off my hands.
“That’s good.” Anne said, and we headed back to the car to go back home.
“I’m glad we finally got to fish together.” I said, breaking down the gear.
“Yeah. Sorry this creek didn’t fish better.” She added.
“It’s better to come out here and discover it to know for sure. And I bet it would fish better if the water was a little higher.” I said, as we drove off.
“Want to stop and get some ice cream on the way back… I know a good place!” Anne suggested.
“You know just what to say to me, Anne.” I said with a smile, and, of course, we stopped for ice cream before we went home.