We left Boise and headed up to Dworshak Reservoir for a few days of fishing and camping. With this being our first campout with Mason, you better believe we had practically brought the whole damn house with us, just in case. I knew the first outing with him was going to be nerve-racking, but it had to be done to get the butterflies out of our system. Dworshak has campgrounds that are only accessible by boat, so this would also be Mason’s first time on a boat. We had picked him up a tiny little life jacket and after the boat was packed and ready to go, we synched him up nice and tight for his first ride. 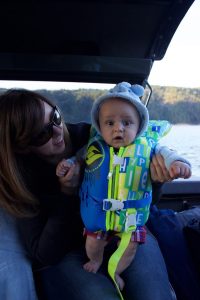 Mason didn’t take to his new life jacket well at first, but he calmed down after my father-in-law, Dan, fired up the boat and we were on the move. 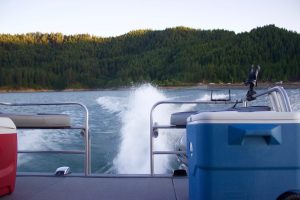 I love the feel of being on a boat. Jetting across the water, leaving the dull roar of the engine behind us, is a great childhood memory for me, and by the looks of it, Mason was also enjoying the ride. In fact, it wasn’t until we were cruising at a steady pace when he forgot about the bulkiness of his new life jacket, and focused on the spray of the water as it jetted from the sides of the boat. 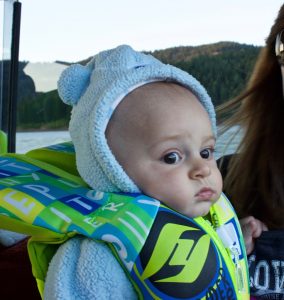 When we picked a camp spot, we unloaded the boat and got camp all set up. By we I mean, Mason’s Aunt Anne, Uncle Jeff, Grandpa Williams, Mom, and myself, with our dog, Kiwi, and Jeff and Anne’s dog, Riley. 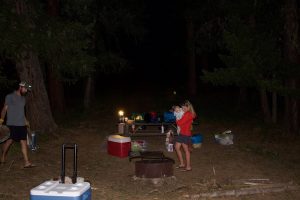 Jeff and Anne’s dog, Riley, is a serious outdoor kind of dog. They take her on all kinds of class five rapid rafting trips, so she is low maintenance when it comes to outings. Kiwi, on the other hand, is extremely high maintenance. Though she is great on day hikes to mountain lakes, she seems to be afraid of everything: the starting of the boat engine, the movement of the waves, the sound of the waves hitting the boat, the crackling of the fire, the absence of her toys, bed, and let’s face it, the whole house. We were not at camp more than five minutes when she got brave and wandered through some cut up wild rose stems. She stepped on a thorn and yelped. The poor thing came running to me with wide frighten eyes, and favoring her left paw as she wimpered over. 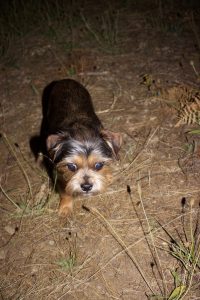 I picked her up and checked her paw for any stickers that may have been stuck, but nothing was there. Kiwi was shaking as I held her, then took her to the tent that was ready for bedtime. I placed her on the nearest sleeping bag, and she quickly got comfortable. Before I closed the tent back up, Kiwi looked at me and gave two loud air licks, indicating she was good now. I zipped the tent back up and heard something in the bushes right beside me. I flicked on my light and pointed it at whatever was making the noise. 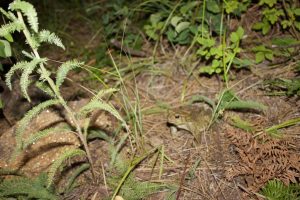 “A frog! Hey, who wants to see a frog?” I yelled over to the family who were around the camp fire.
No one responded.
“No one wants to see a frog?!” I asked in bewilderment.
“I want to see!” Jeff said, and sprang from his chair to check out the frog.
“That’s not a frog…” Jeff said, in his monotone lector voice, “…It’s a toad.”
I looked back down at the little amphibious creature. Jeff was, of course, right, but I couldn’t just say that.
“It’s a damn frog, Jeff!” I said sternly, which made him laugh.
“Well, I better grab him.” Jeff said, and picked up the toad. 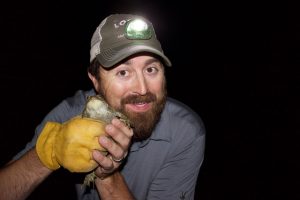 Jeff placed the frog out of our way so we didn’t accidentally step on him as we walked through camp. We returned to the camp fire to find Anne still holding Mason, who was still wide awake looking at the fire. 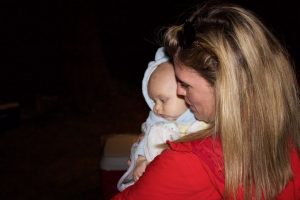 “So much for his bedtime schedule.” Gracy said to me.
“We will get him back to one as soon as we get home.” I reassured, but unaware of how that would work out.
Mason finally did go to sleep to the popping of the camp fire, and we all soon followed. The next day we would fish the infamous
Dworshak Reservoir, home of the state record small mouth bass in Idaho. Here is hoping we get a shot at one that big.