Home to Idaho’s record small mouth bass, Dworshak Reservoir hints to the opportunity for every angler to possibly get into the big one. With that in mind I had an arsenal of fly fishing gear on board, along with a variety of bass flies, so sparkly and neatly placed you would think they hadn’t had the opportunity to tease a bass into submission; but you would be wrong. 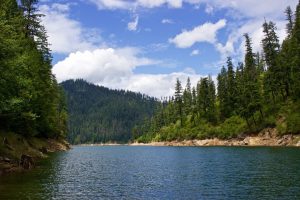 “Looks like a good spot, huh Mase?” I said with promise in my voice, looking right at him. Mason was clutching his Sophie the Giraffe toy, and was mouthing it before I had interrupted. He produced a series of “ba ba bas” after I had gotten his attention, but they were not the cute baby noises everyone was expecting. Instead the small sounds that came from Mason were more raspy and gurgly sounding.
“Oh my God, he sounds like a zombie.” My sister-in-law, Anne, said with a laugh.
“Yeah, it’s his new sound. We call it his baby zombie noise.” Gracy said, looking at him as he sat on his grandpa’s lap.
At that moment Mason realized all eyes were on him, and stopped making the noise. His little head looked at the faces surrounding him, with his head movements magnified by the little hat he wore. Finally his gaze rested on me…
“You better not scare the fish with your baby zombie noises.” I said sternly. Mason just looked at me, seeming more considered about everyone looking away so that he could get back to mouthing his toy. I gave him a quick kiss on the head, and grabbed a fly rod to start fishing. 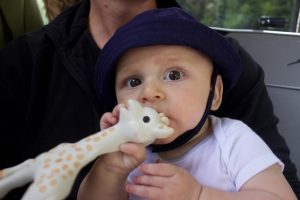 I had a few fly rods ready for action, while my father-in-law, Dan, sat up front manning the trolling motor. My brother-in-law, Jeff, had a spinning rod rigged up like Dan had, but quickly disregarded it when he saw that I had two fly rods rigged. 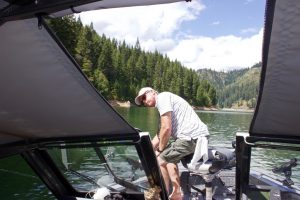 My wife, Gracy, along with Anne and Mason, remained under the canopy of the boat to relax as the three of us pounded the banks. 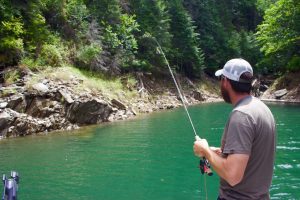 I had tied on rather large flies to our lines with the intention of finding big bass, but the bass that were attacking could not get the fly in their mouths. For a long while we continued with the large flies with the idea that we were looking for the bigger ones, but over time we switched to smaller flies because catching was more important. 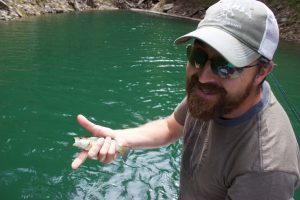 “Get the hell away from me!” I yelled at the pesky black and white hornet that buzzed my face, while waving it away.
“Don’t swat at it!” Jeff said quickly. “That is a bald-faced hornet, and they are very aggressive.”
“Well it’s pissing me off!” I said, and it was. With over a thousand acres of water and forest surrounding us it chooses to zigzag directly in my face?
“Those things will not only sting you if they are mad, but could possibly attack us as well.” Jeff explained, as he fished. I looked over at little Mason playing with another toy of choice, and surely did not want him to be stung. So I gritted my teeth as the bald-faced hornet choreographed synchronized fly-bys inches from my face, as I cast my line. Lucky for me, although small, there was plenty of bass to catch that quickly eased my annoyance with the hornet. 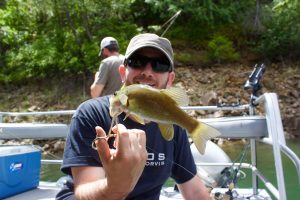 Up at the front of the boat, Dan was doing a fair amount of catching as well.
“Get off there, get off.” He said, allowing slack in his line in hopes that the small bass he had hooked would pop off.
“Looks like another Dworshak monster.” I said, as Dan brought it up to take the little shaker off his line.
“That may very well be the smallest fish of the day.” I said lightheartedly, as he held the fish. 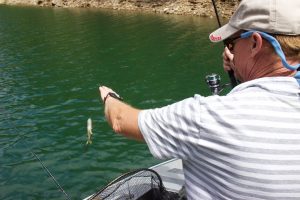 The fish was way too small to lip, so Dan held the fish in his hands. He pressed down on the hook to take it out of the lip of the fish’s mouth, then erupted…
“Yeow! God damn little…” He stopped himself from saying too much as he took the fish, that was now free from the hook, and flung it back into the water.
“Did it get you?!” I asked, watching him look at his hand.
“Those back fins are sharp!” He yelled, but went back to fishing after shaking off the pain. 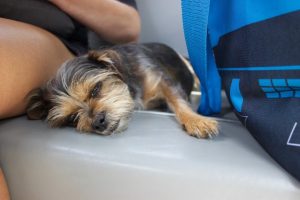 Both Riley and Kiwi got comfortable in the boat as we fished. Even when we celebrated catching a fish over seven inches, the loud noise would merely cause them to open their eyes for a second, then closing them again. 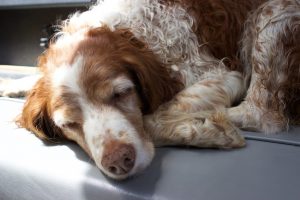 I was fishing barefoot and noticed how hot the back deck was getting. Every time I placed my foot on a new spot it burned, and the lack of conversation, over time, suggested that everyone was getting hot. I looked down at Mason, who was playing with another toy, and he seemed to be fine. He was being kept under the canopy of the boat, so he was out of direct sunlight. Still, it was getting too warm, so we decided it was time to cool off on a boat ride. 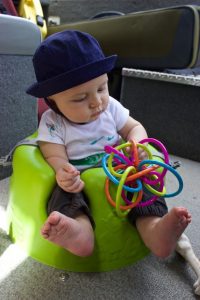 Jeff fired up the boat, and we took off. The sudden rush of air being blown through the boat cooled it off significantly. 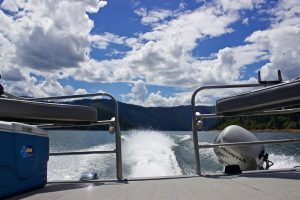 We had suited Mason up with his life jacket before taking off, and since I had been fly fishing most of the day it was my turn to hold him. 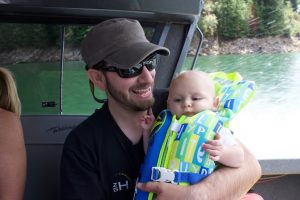 “Hey Mason, would you like to pee of the back of the boat?” Gracy asked, after we had found a new cove to fish. She shed his cloths and held him off the back naked, and pointed away from herself.
“Oh there he goes!” Gracy yelled with excitement, after a small stream flew from Mason and into the reservoir.
“Yeah!” His Aunt Anne yelled excitedly.
“Good job, Mase” I said, looking down at him as he sat on his mom.
His grandpa was still at the front of the boat, and didn’t know what was going on. It wasn’t until Dan started yelling at something, when our attention broke away from Mason. 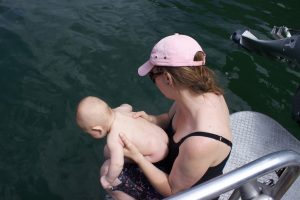 “Oh geez! Oh man! Oh my God!” He yelled hysterically from the front of the boat. We could hear fumbling as he kicked off the trolling motor like he was performing the infamous karate kid crane kick, and then grabbed his fishing pole with two hands.
“Holy cow!” Jeff yelled, and ran to the front of the boat while grabbing the net in the process.
Over the hood of the canopy I could see Dan’s pole at a serious bend, and the little reel was screaming as fishing line was being ripped from it.
“This is my crappy pole! It only has four pound line on it!” Dan yelled in a panic as he managed to fight a monster fish. Finally the fish showed itself in a sudden flash below the surface of the water, then the water erupted as the fish surfaced.
“Whoa, look at that!” I yelled in amazement.
“Look at that!” Dan yelled triumphantly after Jeff had scooped up the incredible small-mouth bass in the net.
“Don’t let it go yet, I want to get a picture of it.” I said, as Dan removed the hook.
“Well I would think so, look at it!” He replied, still shocked at the size of his fish. After the hook was removed, he lifted the bass from the water and held it up for the camera. 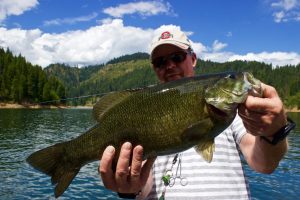 “Got it.” I said, referring to the picture. With that information, Dan placed the fish back into the water, and it bolted to the deep like a large boulder.
“Well, anything to say?” I asked, after the fish was out of sight.
Dan look over at me, and without hesitation said, “try to follow suite.” 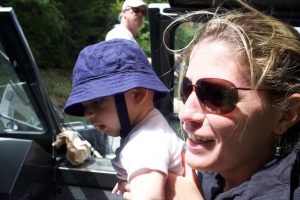 Jeff and I went back to fishing while still getting buzzed by the bald-faced hornets. I was amazed how close they got to Jeff, and how he didn’t seem to mind at all. The fish were not biting as often, but we were still bringing some in. 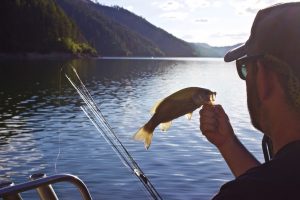 My feet were burning on the back deck, so I took a step while casting.
ZAP!
“What the hell?!” I yelled in shock, after feeling something stabbing into my foot. I lifted my foot up, and to my horror, saw a bald-faced hornet fly out from under it.
“YOU SON OF A BITCH!” I yelled, startling everyone in the boat.
“I’M GOING TO KILL YOU! I’M GOING TO KILL YOUR BALD STUPID FACE!” I yelled, cursing the hornet with every combination of colorful English dialect I could think of while hopping on one foot.
“YOU!” I yelled, whirling towards Jeff who was watching my outburst. My finger was pointed straight at him, and then I started to yell.
“YOU SAID IF I LEFT THEM ALONE I WOULDN’T GET STUNG! WELL LOOK AT ME NOW!” I sat down and look under my foot, that felt like it was on fire.
“Did you get stung?” Jeff asked, stupidly.
“No, JEFF! It gave me the world’s smallest foot massage!” I said scowling.
“It burns, it BURRRRRRNS!” I howled. Although I was in agony and solely focused on my foot, I was still able to catch Jeff trying to hide as he laughed at my pain. I hobbled over to the back of the boat, and slipped my foot into the water. The cool touch helped, but only for a second. Mason started to cry.
“Mason is scared for you.” Gracy said, holding him.
“Don’t worry, Mason…” I said, turning and crawling towards him as if my leg had been blown off by a land mine. “… I won’t let it get you like it got me.” I brushed his face ever so gingerly with the front and back of my hand, as if it was the last thing I would ever do. 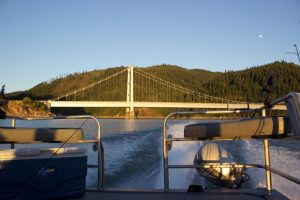 “You really are milking this bee sting.” Gracy said, with a haphazard look on her face.
“It was a hornet sting.” I sternly corrected.
She rolled her eyes and continued talking with Anne as we headed back to camp. From the swelling I was forced to walk on the ridge of my foot, which made walking on the uneven ground tough. Although I got insensitive looks from the family, I really couldn’t help the hobbling. I sat down with my father-in-law, and he also looked at me like I was being a little over-dramatic.
“You know, you never came to see if I was okay.” I said, looking at him.
“Hell…” He said, without thinking twice, “… I thought you had just lost a big fish.”
We both started to laugh as Anne brought me some Benadryl to help with the swelling, which was also putting me to sleep. As I laid down for the night I thought of the bald-faced horned. It was still out there and that troubled me, but soon the pill kicked in and helped ease my mind to sleep.