“It’s going to be a great day.” said Mark Grajcar, as he first stepped out of the truck.
“It’s going to be a fantastic day!” I concurred, looking at the clouds.
“It’s going to be a remarkable day, Erik.” Mark said back.
Whether or not we know it, both Mark and I do this just about every time we are about to start fishing. One of us will make a good comment about how the day will fish, and the other will reciprocate in the same fashion; only using a more elaborate word than the previous one spoken.
“It’s going to be a remarkably fantastic day, Mark!” I said with crazy eyes, and a wickedly excited smile.
Mark laughed because he knew there would be no end to this banter, and we looked over to my father-in-law, Dan, who was in town visiting his grandson.
“Going to be a good day, huh?” I asked him with a smile.
“I hope so…” Dan said back. I quickly shot Mark a look as if to ask, who brought this guy? 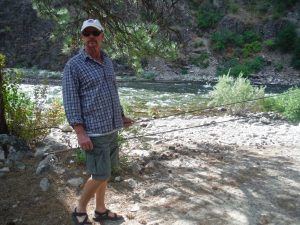 Mark’s raft was ready in record time, and he started to back it down to the river. There is no real launch sight on the Middle Fork of the Boise; we had just lucked out in finding an empty campground we could use. 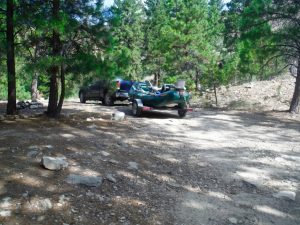 “I’ll row first, Erik.” Mark had said, but I was already behind the sticks.
“I’ve got it, you fish!” I said, and I didn’t need to say it twice. I pulled both the oars hard, giving us our first stroke into the current, and said, “If it were me, I would have already caught a fish by now.” 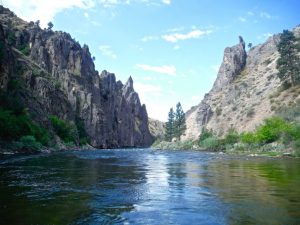 The water was gin-clear and the air was crisp as we headed downstream.  Both Dan and Mark slapped their flies down near the bank, and it was Mark’s fly that got hit first. 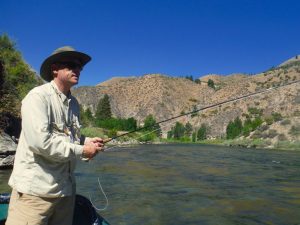 “There’s one!” Mark yelled. His excitement got our attenton and as soon as I looked over, his fish was rocketing out of the water.
“Woah! Wooooah! Wooooooooooooah ha ha !!!”  Both Mark and my yells were in exact unison as we celebrated every bound the fish produced. 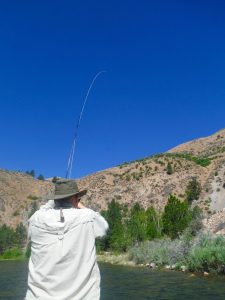 My father-in-law laughed at our excitement over one little fish, but soon joined in after the fish launched itself out of the water once more. I handed the net to Mark, and he skillfully landed his fish as if he had done it a hundred times. 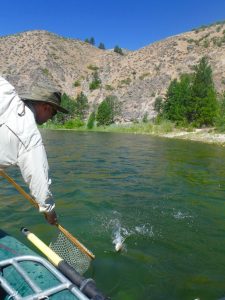 Mark’s ability to get the fly where it needs to be was exceptional. He had easily brought a few more fish to the boat before I realized that Dan had yet to catch a fish. I had been watching Mark’s fly almost the entire time, and had not bothered to see what Dan’s fly was doing. I immediately found the reason why he had yet to hook up, and after a quick adjustment his fly was drifting like it should be.
“There, There, THERE!” I yelled, having seen a take on Dan’s fly before he did. He set the hook, and had a fish on!
“That’s how it’s done boys!” Dan yelled, getting into the spirit of fighting a fish. Both Mark and I cheered for Dan’s success, but it was short lived. Dan’s fish flopped right as we dipped the net into the water, and it came unbuttoned. 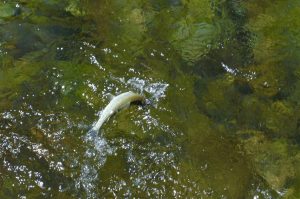 “That was a gentleman’s release.” Mark said, putting the net back.
“A gentleman’s release?” My father-in-law asked.
“As fly fishermen, we never make mistakes. By not netting the fish and allowing it to get away, you have performed one of the purest ways of releasing a fish: completely unharmed and untouched.” I said.
My father-in-law looked at me strangely, as he typically does, as if to suggest, I am full of it.  Either way it was now my turn to fish, and I sprang to the front of the boat. 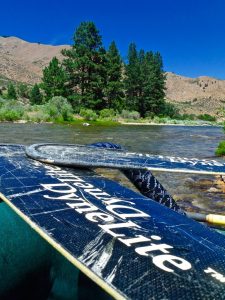 Before Mark had pulled on the oars, my fly was already in action. I had tied on a royal chubby, and we soon found out it was indisputably the fly to have. I was hooked into a fish in no time flat, and quickly brought it to the net.
“Geez, Erik. That was fast!” Mark laughed.
“Which part? Catching or landing the fish?” I asked.
“Both.”
“It’s a shame, huh?” I said, unhooking my fish. I looked up at Mark to see him smiling, and laughing to himself. I knew that Mark knew I was about to say something snobby.
“It’s just a shame to think how many fish we passed by…” I sighed, letting my fish go, “while I was behind the oars”. 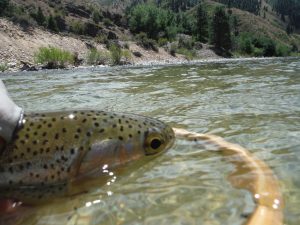 “Oh, Erik…” Mark said, adding hand gestures, as if he were a pastor at a church providing optimum praise, “If only we could be as good… no, as spectacular of a fisherman as you”.
“It’s just enough for you to recognize that, Mark.” I said, with as serious of a tone as I could muster.
I looked over at my father-in-law, who had a look on his face as if asking himself, how the hell did I get stuck out here with theses two idiots?
Mark kicked us back out into the current, and Dan sent his fly to the bank of the river. It was a good cast that was rewarded with a fish, only we didn’t know if he had lost it or not. The amount of slack in his line ensured he had lost the fish, but as he reeled in, a fish was connected. Out of all the great connections he had with previous fish, it was silly that this was the one he brought to the net. 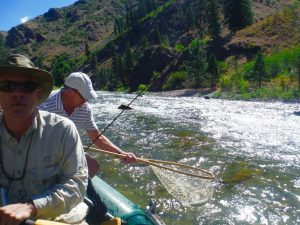 “How do you manage to get all that line in when you hook a fish?” Dan asked, after he slipped his fish back into the river.
“I just strip it in, I don’t try and get it all in the reel.” I said.
“Well that makes a lot of sense. It was taking me forever to get this line in.” He said, then hooked his fly to his rod and got behind the oars. I went ahead and gave up the front of the boat, and took the back to give Mark a fair shot. We were both hooking into fish, but they were flicking off before we could get them to the boat. Finally I got a good hook set in and dragged a fish to the boat.  I could tell by the lazy fight that I had hooked a pike minnow. 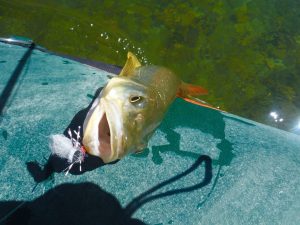 “Oh, Erik! I can’t believe you are letting that fish touch my boat like that.” Mark said with disgust.
“What is it?” Dan asked.
“It’s a squaw fish. It’s basically a trash fish.” I said, as I flicked it off my line.
Dan was still rowing, if that’s what you call what he was doing. We went down a few rocky parts in the river, nothing too bad, but I still found it safer to sit than stand. Somehow, through all the turbulence, Mark managed to hook a nice fish and get it to the boat without falling into the river. 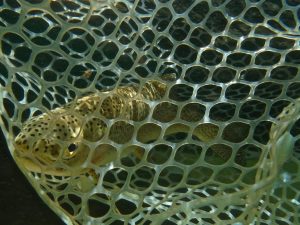 Right at the end of the turbulent water was nice diamond water, and diamond water always holds fish. I slapped my fly right where I wanted it, and held my rod tip high as we floated by. My fly sat there undisturbed, then a fish took.
“Oh this is a good one!” I said, as the fish thrashed after the hook set.
“That one is huge!” Mark yelled, after the fish jumped right beside the boat. Dan quickly handed me the net, and I was doing my best to land the fish. The water was too fast, and the fish was still too hot to bring in. Mark pulled the boat into a big back-eddie where I hopped out and played the fish until it was netted. 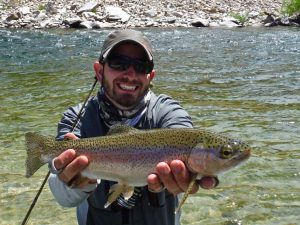 “This fish is for Mason.” I said, after a picture. Both Dan and Mark watched as I dipped the fish back into the water, and held it there until it kicked away. 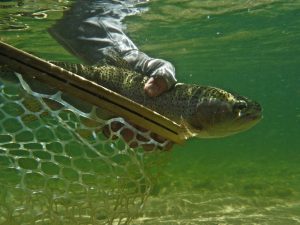 “My turn to row.” I said, and got behind the sticks. We were now on our last stretch of water before the take out, but there was still plenty of fish to be caught. Dan had hooked into a nice fish, but as he brought it in he saw plainly that it was squaw fish. 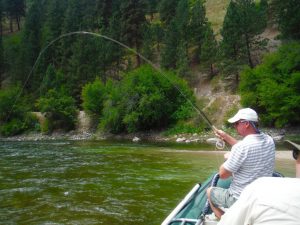 “No, I don’t want a picture!” He said, unhooking the fish just off the edge of the boat so no one could see his trash fish.
“Well you know what they say…” Mark said, pausing. “Better squaw then none at all.” He finished.
“Sounds like a country song.” I said with a laugh, which brought out the poet in both Mark and I. And as luck would have it, Dan’s last five fish of the day were squaw fish. With every squaw brought in a new stanza was created, and the only thing that got us to stop was the first sight of our takeout point. 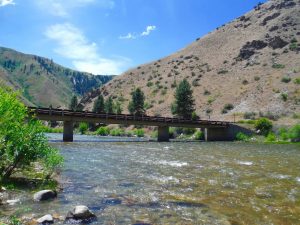 We had taken two cars to make the shuttle, and after we had the boat back on the trailer the three of us headed home. The long bumpy road to the Middle Fork seems twice as long heading home, but it’s a nice drive after a great day of fishing.