In order to make this spur-of-the-moment Montana trip work, a lot of things had to fall into place. First off, it was obvious I was second or third, probably fourth, on the list of people to be invited by Travis Swartz on this trip. So naturally I acquired the knowledge just a few days before the actual trip was to take place, probably when the previously invited friends that came before me fell through. Still, being low on the totem pole of Travis’s friends still has its perks. For instance, this trip included a fully guided fly fishing day on the Missouri River with CrossCurrent’s Fly Shop. Needless to say it was worth the stress of being asked last minute; asking my wonderful wife to take a day and a half off work to stay home with the kid, getting a Saturday off at Anglers, and getting back to Travis in time to let him know that I could actually go before he finds a lesser friend to invite. Once I was there in Montana I did my best to breathe in every ounce of morning Montana air, and once my lungs were full I exhaled that air along with all the troubles it took to get there. 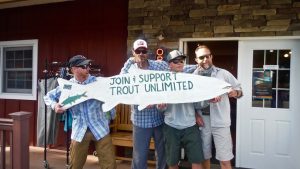 Trout Unlimited in Craig, Montana, auctioned off “A day of fishing with Hank Patterson” for a fund raiser, and someone actually bought it. A gentleman and his son, Arleigh, were the lucky winners of the day, and Travis didn’t disappoint. One step out of the car and Travis no longer existed; he had morphed into his alter ego, Hank Patterson.
“I can’t begin to tell you how absolutely thrilled I am that you get to fish with ME today!” Hank Patterson said, shaking hands with the winners of the trip. We quickly gathered our gear and the boats were launched into the Missouri River. 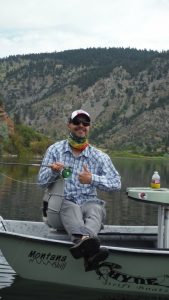 Tricos clouded the banks of the Missouri like billows of smoke from a chimney, and pods of fish were rising like a boiling hot spring in Yellowstone.
“Oh my God.” I said, in awe of this feeding fiasco.
“Yeah, dude. This is why people love the Trico hatch.” Dorn Brown, my guide for the day, said as he oared us into a casting position. I was fishing with Arleigh’s father while Travis was on the other boat with Arleigh and Chris as their guide.
“Just like that! That’s how it’s done…you’re welcome!” Hank Patterson’s voice echoed across the river as Arleigh fought his first fish of the day. 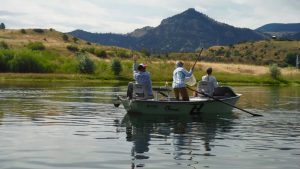 There was no singling out one fish in this pod because every fish had its mouth open. They were like hungry baby birds taking in as much as they possible could, and our best approach was just to let our flies drift through the pod.
I set the hook fast without sound because I was so heavily concentrated on my size twenty-two fly that was barely visible on the surface of the river. As soon as it felt the pressure of the hook, the fish thrashed at the surface of the water like a gator ripping off meat from a delicious, bloated hippo carcass.
“Erik, you got one!” Dorn yelled, and he drew out his net faster than a dueling Jedi.
“Careful up there!” Dorn yelled to Arleigh’s dad, who had to duck out of the way of my fly line as the fish ran to the other side of the boat. Dorn twirled the net to the other side of the boat as if he were trained by Jackie Chan, and netted the fish with one hand while keeping the boat steady with the other. I tell ya, if netting fish were an Olympic sport, Dorn would have taken home the gold. 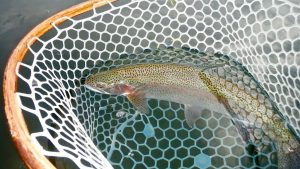 We had a few hooked fish, but this one was the first to the boat. Dorn slipped it out of the net and the fish shot away.
“That is the best part.” I said, as the three of us watched it disappear.
“Yep, but now it’s your turn.” Dorn said to Arleigh’s dad, and we went back to fishing.
The pods of fish were not slowing down by any means, and if we got too close to a pod they would simply move away together and start feeding at a safe distance. Well, they thought they were safe. I had hooked into a few more before Arleigh’s father had one take.
“You got it!” Dorn yelled at Arleigh’s dad, whom was focused on landing his fish. Dorn was ready with the net, but this fish was not. I could hear his reel screaming as the fish broke the sound barrier in its attempt to escape. Dorn had to forsake the net and get back behind the sticks in order to follow the fish. It was the right call, because soon the net was back in Dorn’s hands and jabbed into the water. A well deserved pat on the back was given to Arleigh’s dad before Dorn angled the net downward for the fish to slip away. 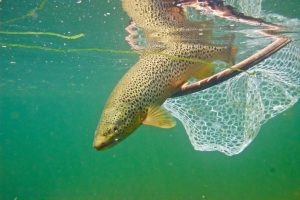 In the other boat Hank had hooked into a few fish, and Arleigh had a fish take him into his backing. It was a great morning, but our guides insisted that we push on further downstream. 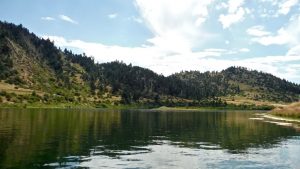 We saw no more pods of fish feeding downstream, so we had to resort to nymphing. The bright sunny day was not working in our favor. Theory has it that on a bright sunny day with no cloud cover the fish become more selective and cautious. Their visibility enhances due to the well-lit water, and they will stay hunkered down to avoid predators. 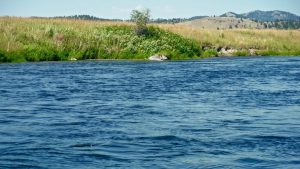 It was a long while before Arleigh’s father’s indicator shot under, and he wrenched up a nice trout. It was nice to have the day broken up by hooked fish, but they were few and far between today. 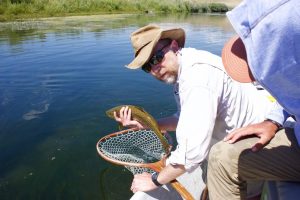 “How are you guys doing over there?” Dorn asked the other boat.
“We hooked into only one fish after the trico hatch.” Chris answered back.
“Us too…”
“Did Erik catch the fish?” Hank asked.
“Nope.” I answered.
“Gooooood! I am okay with not catching fish as long as Erik doesn’t catch a fish.” Hank said fortunately. 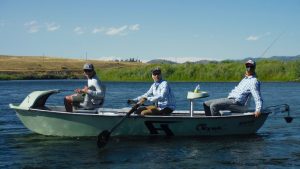 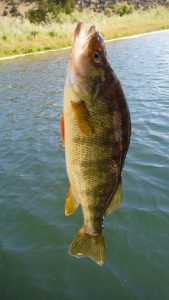 The trico hatch that morning was what made the trip. At the end of the day we all stood around and spoke of the success the early morning brought us while sipping on a cool beverage of choice. 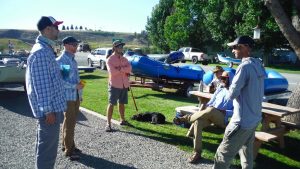 Travis and I got back into his car to head back to Dane’s, Travis’s nephew’s, house where we were staying. Tomorrow we were fishing with Dane, and he had a nice section of the Blackfoot River to take us on. I have never fished the Blackfoot, so this was going to be great. I would have to try and get over the excitement of fishing new water the next day in order to get some sleep… But sleep eventually found me.