“Well, here we are!” Travis said as we got out of the cars and looked down the embankment at a river begging to be fished.
“That looks nice.” I said, and turned away from the river to gear up. Although I can appreciate a nice scenic view, I would much rather be smack-dab in the thick of it all rather than watching from the sidelines. Today Travis’s nephew, Dean Broadhead, was accompanying us after having to missed out on the previous day’s adventures on the Missouri River. Dean is a PE teacher and also teaches fly fishing at a local high school. He had his fly rod put together and had a fanny-pack fly fishing case strapped to his waist, in true PE teacher style. All geared up, we headed to the river. “Good Lord!” Travis yelped.
“Oh man, that’s cold.” Dean concurred after his first step into the ice cold water.
The first step into icy water is always the worst, but the second and third steps were not any better. I felt like the T-1000 as it stepped through liquid nitrogen, and I was waiting for the moment when my feet would shatter into icy shards as I crossed the stream. 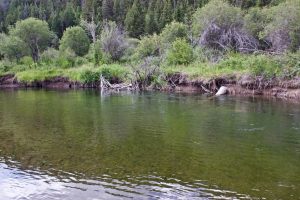 “I hate to say it, but the next time we cross the river it will be waist deep.” Dean said, as I looked down to make sure my feet hadn’t shattered.
“Oh, I forgot about that.” Travis said, following Dean.
They both kept walking down to the deep spot to cross, and all I could think was, am I the only one of us that didn’t want to go waist deep in this cold-ass water?
“Why don’t we go upstream?” I asked in a desperate attempt avoid what was about to come.
“The spot we are headed to is literately the best spot we have found on this river.” Dean said.
“And it has produced the biggest fish we have caught here.” Travis added.
“That’s right!” Dean remembered, shattering my hope to avoid a waist deep crossing like a gun shot aimed at the frozen T-1000.

No way, could it be?!
Two other anglers were already fishing the very spot Travis and Dean were charging for. I had never been so happy to see someone else in our “great spot“.  The warmth of this sight melted my frozen, shattered heart, and it slowly converged and rose my spirits just like that same T-1000. We headed upstream and found a great spot to fish. The spruce moth was the local recommendation, so with one tied at the end of my line, I presented it better than a Terminator II reference. The rocks came alive, and a fish quickly came into view as it was headed straight at my fly. I could see the white of its mouth as it opened wide, and I set the hook after it had closed its little mouth around my fly.
“Come on, guys! What’s taking you so long?!” I yelled to Dean and Travis with my fly rod held high, displaying the first fish of the day. “Damn it! Not Erik. Anyone but Erik!” Travis yelled with displeasure.
After I had let my fish go I saw that Dean was fighting a fish, so I ran over to see if he needed help landing it Dean, on the other hand, needed no help at all. He scooped up his fish and removed the hook promptly to quickly get the fish back into the water. If I hadn’t had my camera out and ready, I would have missed the one-time shot he allowed before lowering his fish into the water. 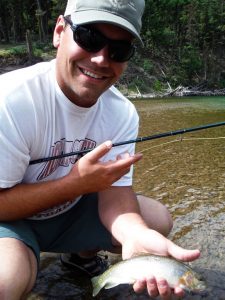 “Has everyone caught a fish yet?” I asked loudly, knowing full well Travis had yet to hook up.
Travis looked over my way and gave a most distasteful glance.
“Oh…” I said, as if I hadn’t known the answer, “…how embarrassing.” 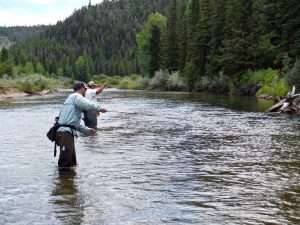 Travis started working some great looking water, but nothing was coming up for his fly. Although Dean and I had caught our first fish on a dry fly, it seemed that the fish had turned off to them. Our flies knocked on every door that looked to have a resident fish, but no one seemed to be home. That’s it, I thought to myself, and clipped my fly off to replace it with a large jig-style hare’s hear. One cast with the heavy nymph proved it was the right choice to make, because in the same water I had just fished with my dry fly, a fish willing took my nymph. 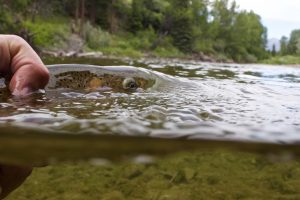 “Ohhh! THAT’S how your fishing now?!” Travis said accusingly after I had let my fish go.
“The dry fly activity just isn’t happening…” I said, just as a fish came up and nailed Travis’s fly. 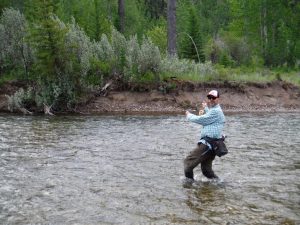 “What’s that Erik? What’s not happening?” Travis yelled fighting his fish. I just stood there watching him fight his fish, and for a second considered switching back to a dry fly.
“What, Erik? Nothing to say? I mean, you are THE EXPERT!”
“I hope you lose that God damn fish!” I spat.
Travis was bringing in his fish, but it was putting up a great fight. It was a sizable fish for this river, and if Travis kept fighting it like he was he had a chance of losing it.
“Well are you just going to stand here watching, or are you going to help net this fish!” Travis snapped.
“You can’t handle that little fish?” I said, and walked over, unhooking my net.
“Whatever, you wish you could catch a fish this size.” 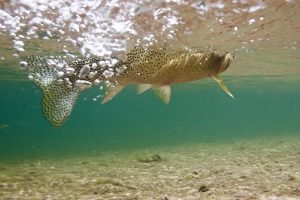 Travis had played the fish enough for me to scoop it up with my net, and there was a cheer when his fish was securely landed.
“That is a nice fish.” I admitted, and went to pull his dry fly out of the fish’s mouth?
“What the hell is this?!” I inquired, holding up a size four black streamer.
“Oh yeah…” Travis laughed.
“Well they were not hitting dries, so I figured I would throw a streamer.” He said, as if he had not just testified his distaste for my switching to a wet fly.
“So you just forgot you were stripping in your fly instead of letting it drift?” I asked.
“Could we focus on this fish in your net, ERIK! I’m sure you’re stressing it.” Travis said, in an obvious ploy to distract me from his choice of fly.
“It’s been underwater the entire time.” I said, and tipped the net up, allowing the fish to escape. We then stood and walked up to
Dean. who was fishing a beautiful drop off. 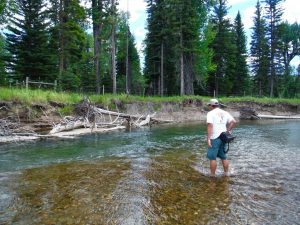 You have got to hand it to Dean; while Travis and I went to the dark side, Dean was still pitching a dry fly.
“Anything on the dry?”
“Nothing…”
“Mind if I fish downstream from you?”
“Go for it.” Dean said.
I felt like a slimy worm as I hooked into a few fish in front of Dean. I wished as much as the next guy that the fish were nailing dries, but they just weren’t. 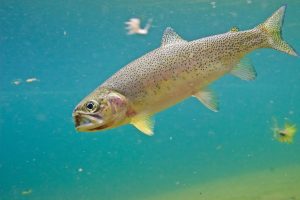 I continued to rake in the fish, but I did allow Dean to hit the spot first with his dry fly, and Travis with his streamer, before I went lastly and caught the fish. 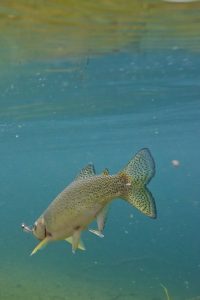 “Why won’t I switch to a nymph?! I know damn-well that I would catch fish, but I just won’t do it.” Travis yelled, after I had released yet another fish.
“It’s because your stupid.” I said quickly. Near the end of the day, Dean had to head back home, leaving Travis and I to fish by ourselves. We drove further downstream and found a public access spot. We fished it hard for a few hours with no success, and then Travis saw a fish rise. Standing a good 40 feet downstream, he made a long beautiful cast up to the rising fish with a dry fly. 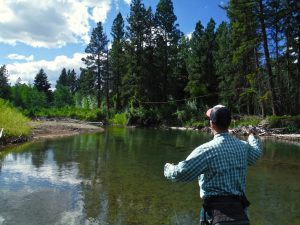 “Yeah, Dawg!” Travis yelled, as he set the hook on a trout the size of a key-chain. The little fish hopped out of the water in a hopeless attempt to escape that was almost cute. The fight was over before it had started, and Travis unhooked the fish unceremoniously and it darted away.
“Well so much for the spruce moth hatch.” Travis said as we walked back to the car.
“We did see two of them.” I reminded him.
“Two is not a hatch.”
“Very true, but it was still a good day for… some of us…”  I said, glancing at Travis as we got into the car.
Travis went on to explain how catching less fish with his choice of flies made him a better angler, or something. I wasn’t paying attention, as his explanation took up the entire two hour drive back to where we were staying.