“Oh no! Dude… Don’t tell me!” Said a worried Jason Sackmann. Jason had come from Spokane, Washington, to Boise for work, and was able to squeeze in a day of fishing with me, something we had been trying to accomplish ever since I discovered that Jason fly fished. I stood over my fly gear on the South Fork of the Boise, just about to piece together my fly rod, when I set it back down to go see what Jason didn’t want me to tell him.
“What’s up?” I asked, peeking around the trunk of the car. Jason was rummaging through the trunk of the car, which was empty except for one fishing pack that he kept shifting around as if something was purposefully hiding behind it.
“Dude… I think I left my vest.” He said, turning over the fishing pack for a fifth time before coming to the realization his vest was not playing hide and seek.
“Don’t worry about it, I have plenty of flies for us.” I said, and walked back to my fly rod without a worry.
“Oh no! Oh you’ve got to be KIDDING ME!”
I hadn’t even put together the first section of my fly rod before Jason erupted for a second time.
“What now?” I asked, speaking a bit louder this time, so that I could continue gearing up.
“My reel was in my vest pocket…” Jason said, sounding like his excitement bubble had just been deflated.
“Geez, when it rains it pours.” I said, peering around the trunk to look at Jason. 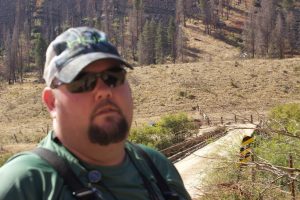 The look on his face made me erupt in laughter, but Jason was not following suite. I know exactly how he felt. I too had once forgot my reel on a fishing trip, and it was like running smack-dab in the face of a dementor: worry, panic, denial, and an ice cold chill that floods your mind to the point where you feel like you can never be cheerful again. Those of you who have experienced this dread know that not even a good piece of chocolate can help. Still laughing, I strolled over to my gear bag and pulled out an extra Lamson reel that I quickly handed to Jason. As soon as the reel hit his hands I could tell a small weight had been lifted. 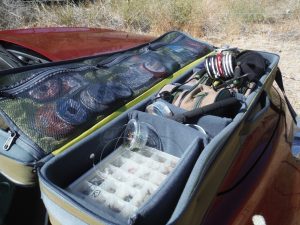 With our, I mean my, gear secured to our fly rods, we headed downstream to find a nice place to start fishing. 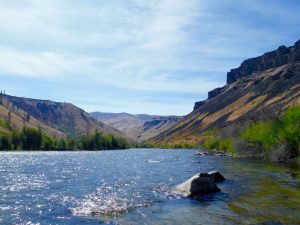 Other than chatting via Facebook, Jason and I hadn’t seen each other in over sixteen years. Our friendship had been rekindled through fly fishing, and as we walked he told stories about old friends that I haven’t thought about in a long time. I could tell his mood had greatly improved in a matter of minutes as we walked and talked, and after a funny story he turned towards me.
“So how about you, man, what have you been up to?” He asked, happily.
“Me?” I said with cheer. “Well lately I have been wondering how the hell someone could have forgotten their fly fishing vest and fly reel when they knew they were going to fish the South Fork of the Boise River today.”
Jason’s smile faded faster than Jimmy John’s delivery.
“Dude…?” He said, with a pleading note in his voice.
I again started laughing, then pointed to the water.
“Come on. We’re here, let’s fish.” 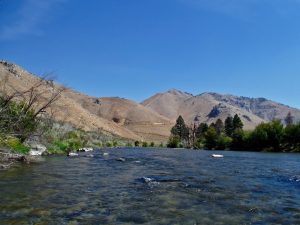 “So how would you approach this?” Jason asked, standing in the water and unhooking his fly.
“I like to cast my fly upstream around those rocks. Almost like I’m searching for fish on a small creek.” I said, pointing to the riffles created by the rocks where I thought fish may be holding. Jason nodded and started fishing a great looking run just downstream from us.
“Would you like to hit that first?” I asked, pointing my rod tip at a small pocket of water just behind a snag.
“No, go ahead.” Jason said, and started to fish a small pocket just downstream.
I cast my fly to the small pocket of water and lost sight of it, then it fell to the surface. I still kept my eye on the pocket, because I knew my fly would eventually drift over it. I saw a small flash just at the surface of the water, and decided to set the hook. 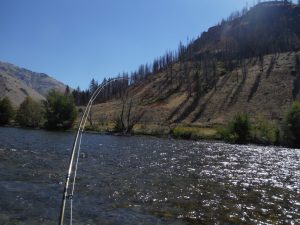 “Hey, Jason!” I said looking over to him while my fly rod danced with a fish.
“Already? Seriously… I hate you!” He said back, and watched me bring in my fish. 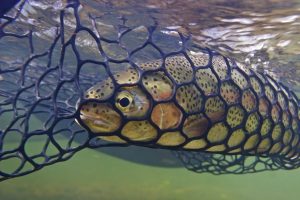 “Okay, seriously… teach me me how you are fishing.” Jason said, abandoning his spot to join me.
“You bet.” I said, and I quickly explained my tactic and why I think it works. Jason caught on to the approach quickly and began to fish. 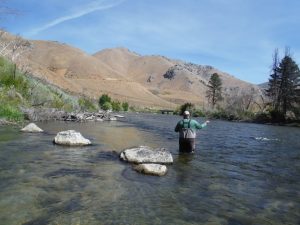 “Let me see what fly you are using” I said after hooking into another fish. I saw it was not the same fly I was using.
“Want to switch your fly? The one I have on is working.” I asked.
“Yeah, if that’s okay.” Jason said, and I started pulling out my fly box. As I looked for the right fly, I noticed some fuzz attached to my fishing vest. I looked up at Jason and saw he was looking at the river while I scanned my box for a fly. Without him noticing I plucked off the fuzz from my vest and quickly rolled it in between my fingers. After a quick second I looked at the fuzz and saw it looked like it could pass for a small mayfly, which is exactly what I was hoping for.
“Here you go.” I said, and handed over the fly/fuzz so that only a small part was sticking out of my fingers. For all Jason knew, that was the wing of the fly sticking out. Jason pulled out his forceps and opened the jaws to grasp the fly, but just as the jaws of his forceps clamped down, I dropped it.
“WHOA!” Jason yelped, as he saw the object hit the river. His fingers jabbed at the piece of fuzz like a frantic feeding chicken as it drifted downstream. In a last desperate attempt to catch what he thought was a fly, Jason started clawing at the river and was just about to bolt downstream until he looked up at me. I was watching him with my hand covering my mouth, visibly shaking with laughter.
“Uhhh” Jason grunted, and started to smile and laugh at himself.
“All I was thinking was, ‘how could you be so careless with your flies?'” He said with a laugh as I handed him the real fly and he started fishing. 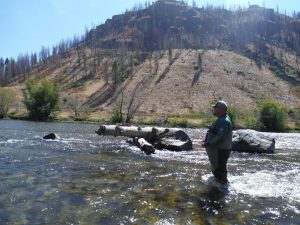 Jason didn’t disappoint. A rising fish caught his eye and he presented a most scrumptious fly. The fish took and Jason played the fish like a pro. 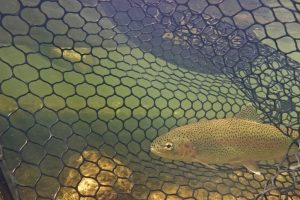 Sadly we were near the end of our day, because Jason had to get back to Boise for a dinner arrangement.
“I’m staying at their house, so it would be quite rude of me blow them off.”  He explained, as I tried to talk him into staying until the evening hatch.
“I understand.” I finally said, and we geared down to head out.
“I had fun, and you taught me a lot of new stuff I am going to try on my home rivers.” Jason said, as we drove away from the river.
“I need to get up their to fish.” I said.
“If you come up, let me know.” He said back.
“You will be the first person I call.” I said. Jason nodded with some encouragement, and my mind started working on how I could get up to visit Jason this season.