“Are you ready for this? Your first mountain lake?” I asked excitedly, while holding Mason in my arms. His little eyes darted from left to right, taking in his surroundings after I brought him out of the back seat.
“Da da da da…” Mason said in such a hushed tone that I knew I was the only one to hear it. A bird flew by low and quick and I was surprised at how quickly Mason’s little head whirled around to catch a glimpse.
“Did you see that?” I whispered to meet his tone, “that was a bird.”
“Da da da…” Mason replied softly still looking in the direction the bird flew. 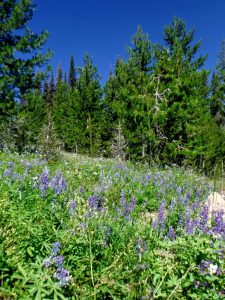 “Should we get you in your pack so we can get going?” I asked him, still in a hushed tone. It took him a moment but he turned his head to look at me with a smile. “Da da daaa.” He said again, this time louder, and I took it to mean he was ready. 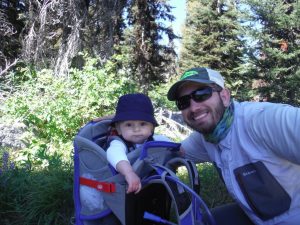 “He looks so good in his pack.” Gracy said, flashing a smile over to him. Mason, of course, reciprocated with a smile of his own, and so Gracy knelt down in front of him to take in the while picture…
“He has his new pack! With his hat…” Gracy said, touching the hat to make sure it was secure, “…and what are these?!” Gracy’s voice shot up an octave, “Are these your hiking socks that Dad picked out for you?” I looked over to see Mason smiling.
“Yep! He has his special hiking socks on to bring us good terrestrial fishing.” I said, pointing out the grasshopper to our friend, Edie, who was joining us for the hike. 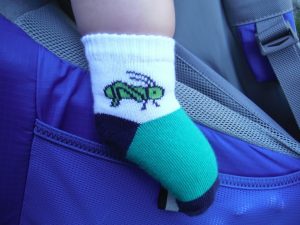 I slipped the pack on my back with Mason secured in it like we had practiced at home. And just like at home he was happy to be in it; even more so today because we were outside. Once everyone was ready, the five of us started on our walk to the lake. The fifth was Kiwi, who was leading the way. 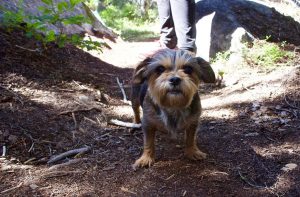 “How are you doing back there, Bug?” I asked Mason, as we walked by a marshy spot on the hike. I had stopped so both Gracy and Edie were standing right beside me.
“Could you look over Mason and make sure there are no mosquitos on him?” I asked. Just in case we got attacked by the little buggers, I had brought a bug-net that could protect Mason as we hiked. After a thorough inspection by both Gracy and Edie, finding no bugs, we kept on to the lake. 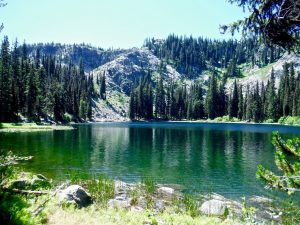 “There it is, man, your first alpine lake!” I said with a smile.
“Is he looking at it?” I asked Edie who was there at my side.
“Oh yeah, he’s looking.” She said, as we continued our hike up to the second lake. 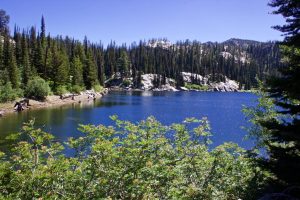 “Lake number two!” I said to the group as I slipped Mason off my back and in the shade.
“Hey guys come look at this. He’s making a new face.” I said. Both Gracy and Edie came quickly like I had offered free pie along with Mason’s new look.
“He looks like a cabbage patch kid.” Gracy said, and both of them played with him while I stepped away to gear up for fishing. 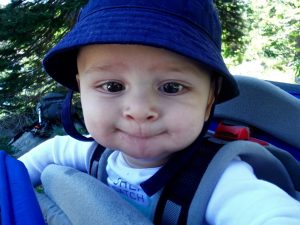 It was one of Edie’s first times fly fishing, so I tied a little green beetle on her line and gave her a quick lesson on how to roll cast.
“Oh!” Edie looked at me shocked after a fish hit her fly.
“Don’t worry, you already did the first thing right. You set the hook.” I said happily. 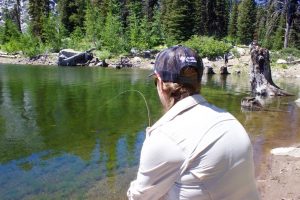 Although it was Edie’s first fish on a fly rod, it was not her first fish ever. She played the little fish well, and I stepped into the water to to unhook the fly from its mouth after she had brought it in. 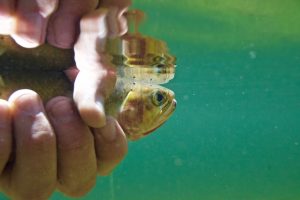 “Not a bad little fish!” I said, looking back at her.
“The colors are nice.” She said back, and I let the fish slip away so she could watch it swim home.  After Edie’s first fish, I stepped away to catch some fish of my own. I watched from a distance to see if Edie’s roll cast was still good, and it was. I then flicked my own fly out and watched as a little cutthroat trout snatched it from the surface. 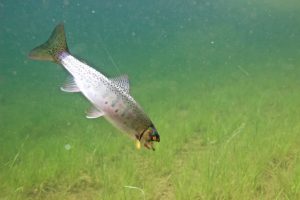 Both of us were putting on quite the clinic for Gracy, Mason, and Kiwi, who were watching from under the shade of a large pine tree. 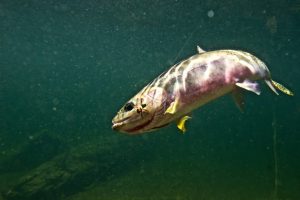 I would have like to have taken a fish up to Mason, but he was too far away and I didn’t want to hold the fish out of the water for that long. Mason was still enjoying his time out on the upper lake, but it was soon time to go check out the lower lake. 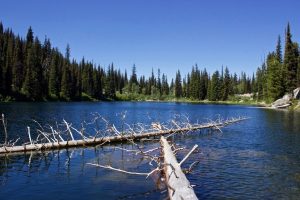 The lower lake proved to be tough fishing. I did manage to hook one fish, but it came unbuttoned when I tried to get an underwater shot of it. Sadly that was all that I was able to hook into, and after a while of searching for fish, I ended up back where Gracy and Mason were hanging out. Edie was also not having any luck fishing, and lost her fly in a low hanging branch which ended her fishing for the day. I started to gather all the fishing gear together for our hike out while Gracy and Mason watched from a nice sitting rock. 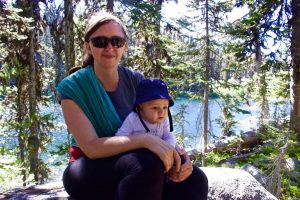 Mason hates being in his car seat, but after a nice hike like today he didn’t seem to mind. Kiwi slept on her bed that sat beside Mason’s car seat as we stopped at Ice Cream Alley in McCall. I had promised myself I would only get one scoop in a cup, but because we had accomplished Mason’s first alpine lake I ended up with a waffle cone with two scoops of cookies and cream. 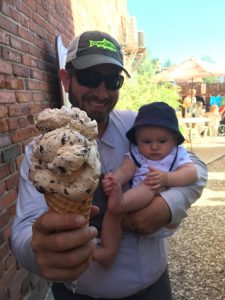 “Sorry, Mason you are to small to have ice cream.” I said, taking a cavity-making bite off the cone.
“Awwww, that’s sad.” Edie said, as we walked back to the car to head home.
“Why did you let me get two scoops? I did not need this much ice cream.” I complained to Gracy, who was enjoying her two scoops as well.
“Like I could stop you.” She said sharply.
“But it’s a celebration for Mason’s first hike, so it’s worth splurging.” Edie said, keeping the peace.
“Whatever, Erik can find something to celebrate every time we go out for ice cream.” Gracy said twisting the knife. But it was true. I looked over at Edie and gave her a sad nod to confirm what my wife had said was true. I looked at my double scoop like it was the epitome of my bad choices, and slowly ate it in silence until I had devoured every crumb. It was Mason’s first mountain lake, after all…