The forecast called for cool temperatures, heavy rain, and strong gusts of wind, but that wasn’t going to stop Mark Grajcar and I from getting an early season float on the South Fork of the Boise River. It is a rare treat to float the river this early in the season. We typically don’t get to until Memorial Day weekend, but with the heavy runoff this spring the flows got bumped up early. 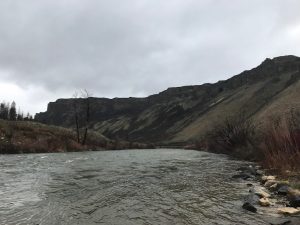 The plan was to start off our float further downstream where the water may be a degree or two warmer. With this in mind we had one rod rigged up with a skwalla pattern I had tied up early that morning, hoping it would catch the attention of a hungry fish. We also had a rod rigged up for nymphing. 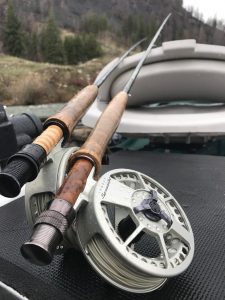 “Mark, would you like to fish first?” I asked, just as we were about to start our float.
“No, Erik. Why don’t you fish first to show me how it’s done.” Mark said, getting behind the sticks.
“Okay, but normally I charge for this…” I said with a sigh, as I took the front of the boat.

I relentlessly force-fed the fish a skwalla that they were clearly not interested in, but there is something inside of me that had to try the dry fly first to completely rule it out for the rest of the day.
“Okay, Mark it’s your turn.” I said, after a while at the front.
“Are you sure? You haven’t caught a fish yet.”
“Actually, I just wanted to show you how to cast before I let you up here.”
“Well you certainly did that.” Mark said with a laugh before switching spots. 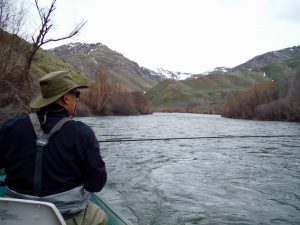 “Oh right there, c-mon BOOM!” Mark said, giving himself credit for laying out a perfect cast just behind the branches of a protruding bush. The “boom” is a way of letting a fish know that the cast just accomplished was good enough for a fish to take the fly. The actual “boom” itself is hypothetically a fish taking his fly, but nothing took.

“I caught a nice fish right up here.” Mark pointed out with his rod tip before making a cast. Mark’s indicator floated through the spot with not so much as a twitch.
“Geez, where are the fish?”
“There are no fish in this river, Mark… Not since the fire…” I said. Sure the “fire joke” is a few years old by now, considering the fire happened in 2014, but it still got Mark to laugh so it was worth saying.
“I was here with, Jim [Kazakoff] during an amazing caddis hatch, and caught fish all along this bank here.” Mark said, making another cast.
“Oh c-mon right there fish, boom!” Mark pleaded, but still no fish took.
We were nearly past the half way point of our float with not a single fish to the boat. 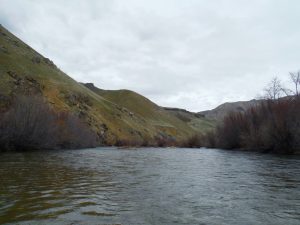 A large bush stuck out into the river creating a nice pocket of water behind it, and just as his indicator slipped around the bush it jetted under water.
“YEAH BABY!” Mark yelled, feeling the fight of the fish rather than the sticks we had hooked into earlier.
“Maaaaaaaaark!” I yelled in delight, after seeing the fish splash at the surface. At a quick glance the fish had to be about twelve inches long.
“Whoa look at that one!” Mark yelled, laughing.
“What was it Mark, 20 inches?!” I yelled to him, which was completely unnecessary as he stood two feet away.
“Oh, easy 20!” Mark replied laughing.
The fish dove deep, but it was hardly anything Mark couldn’t handle.
“Careful, Mark!  Don’t let him break you off!” I yelled in desperation.
“Mark! MARK!  HERE’S THE NET!” I screamed at the top of my lungs, while holding out the net. Mark took it laughing. We had been on the water for a few hours now and this could very well be the only fish we caught for the day, so I continued with the fanatics.
“Do you know how to net a fish of this size, Mark?! Do you need me to get out and net it for you?!” Mark was laughing still as he was seconds away from netting his fish.
“HOLD ON, MARK, I’M GOING TO TAKE US TO THAT BACK-EDIE!” I yelled as saliva flew from my mouth. I grunted loudly with every row to the back-edie, and dropped the anchor. Mark had already netted the fish before I even started rowing. 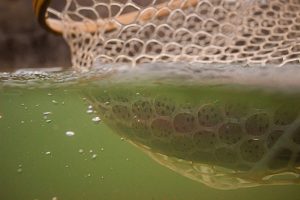 “Well, it may not be 20 inches, but it’s a fish!” Mark said laughing.
“That’s true!” I said, as Mark went to release the fish.
“Hold on, Mark, I want to get a shot of the fish leaving the net.” I said, reaching for my underwater camera.
“Okay.” Mark said, as I undid the strap securing my camera to the frame. I flicked my camera on, and turned towards the net that no-longer held a fish.
“What the hell?!” I said in disbelief.
“Oh, what?!” Mark said looking down at the empty net, then both left and right as if the fish was going to be there just under the surface waiting for him.
“Oh shoot. I guess it jumped out of the net.” Mark said, innocently.
“Really, Mark? Is that what it did? I thought it sprouted wings and flew out!” I said, clicking my camera off.
“Well I wanted to keep it wet so I dipped it back into the water, and I must have dipped it too far…”
There was a twinge of guilt in Mark’s voice and the situation was more funny than anything, so fastened my camera back to the frame and took the front of the boat: it was my turn to fish. 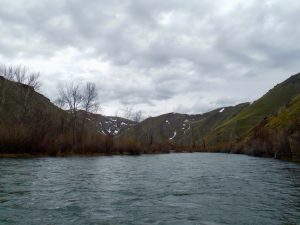 I pounded the banks and break waters in search of a fish, but nothing was interested. At one point my indicator shot under, but it was just a stick.
“I caught a fish in this stretch ahead.” Mark said, as we neared a long stagnate stretch of the river.
“It was on a dry fly.” Mark remembered, “they were rising all over in here.”
“What a nice memory. Thank you for sharing.” I said, sarcastically. Mark just laughed, as we slowly drifted downstream.
“But…if there were going to be any rising fish, this is where they would be.” Mark said, and he was right. Just ahead I saw a mouth come up and sip a mayfly off the surface.
“Anchor!” I shouted, “rising fish!”
Mark unhooked the rope and the anchor stopped our float. Then the fish rose again.
“Oh, there it is!” Mark said, as I rigged up a leader with a small dry fly. 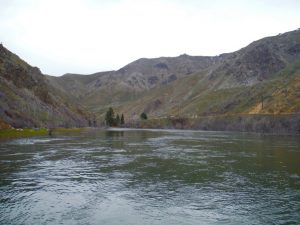 Both Mark and I stared at the water, waiting for the fish to rise again.
“Figures. As soon as I get all rigged up with an RS2, the damn thing stops rising.” I said, not taking my eyes from the river.
“There it is.” Mark said.
“I see it.”
“It looks to be a dink.”
“I don’t care, Mark. It’s rising, and if it’s rising it’s mine!” I said with confidence.  I made a few casts but a seam in the water was pulling my fly away from the rising fish.
“Do me a favor and pull on the right oar…” I asked Mark.  He did so, and with the anchor in place the boat swiveled closer to the rising fish, allowing me to get on the inside of the faster current.
“Oh right there, boom.” Mark said, as my fly hit the lane of the feeding fish.
Sip!
“Gotcha!”
“Yeah baby!” Mark yelled, as I brought in my fish. 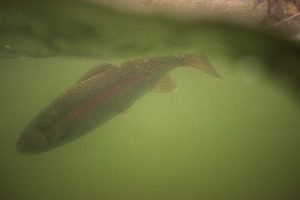 “Now, Mark! Would it be too much trouble to ask you to keep the fish in the net?” I asked, causing Mark to start laughing…
“I got it.” Mark said.
“Sometimes, if I can get close enough, I can get a nice shot of these fish if my camera is on the right setting..” I said, reaching just behind the fish as Mark dipped the net. The fish didn’t take off right away, which made for a great shot of it underwater. 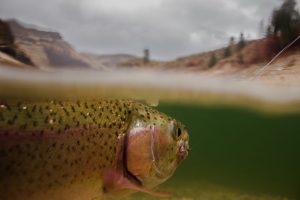 “Thanks Mark.” I said, as the fish slipped away.
We quickly switched places and continued our float. 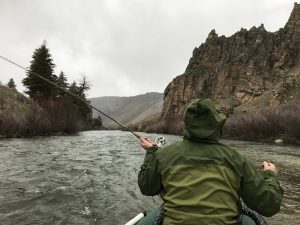 Earlier the day had threatened to rain, but it was no longer a threat. The clouds dumped rain on us as Mark pounded the banks with his nymph. Luckily we had no wind so a quick adjustment of unfolding a hood and we were set to continue.
As I fiddled with getting my hood on while oaring the boat, Mark had hooked into a fish. 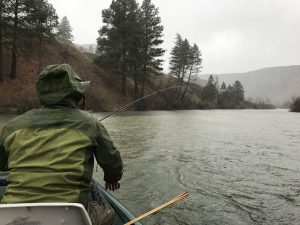 “Holey cow, Mark. That actually looks like a decent fish.” I said, getting the boat back in control.
“It’s making a run for it!”
“Do you need the net?” I asked, but after I had said it I knew it was too soon to net this fish. Mark didn’t reply. The fish had revealed itself at the surface to give us a good idea of its size.
“Geez, Mark! That fish is easily eighteen inches.” I said, and this time it was no joke. Mark continued to work the fish, and with the net now by his side he could land it if it would come close enough. Although the fish was clearly tired it kept its distance from us, making it hard to net.
“Okay, Mark. Get the net ready. I’m going to push us forward, and when I do, net the fish.”
“Okay!”
Mark had the line tight, and when I pushed forwards with the oars, Mark slipped the net under the fish and pulled it up with a cheer! 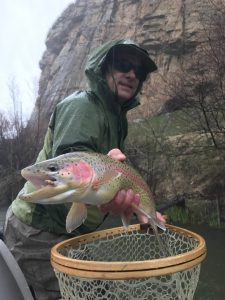 “Wow! Look at the colors of that fish, MARK! THE COLORS!!!” I screamed with excitement.
“Yeah, it’s beautiful. I bet it’s getting ready to spawn.”
“I bet you’re right. Hold on, let me get my camera.”  I said, and as Mark dipped his net into the water I snapped a couple of shots as it escaped. 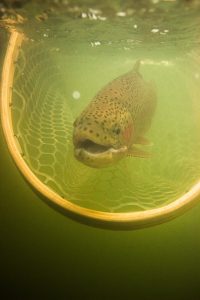 “Well, not the most productive day on the water, but fun!” I said, as we docked the boat at the takeout point.
“That makes three fish to the boat today?” Mark said.
“Yes, but one fish on a dry easily equals two with a nymph.” I said, laying heavily on the word nymph.  Mark just started laughing as we pulled out the boat.
“Still, it was nice to get an early float.” I said.
“Yeah. I can’t remember the last time they upped the flows this early.”
“It was before my time as an angler… but you probably remember it.”
“Oh ouch!” Mark said, grasping his heart.
“Well, until next season… Goodbye South Fork.”
“Yeah…” Mark said, and we toasted the river with a ginger cookie from the Flying M.